Providing useful insights about Peru as a country, nation, and society were the main facets of the lecture provided by Ambassador Marcela Lopez Bravo. The presentations showcased new perspectives in allowing viewers to recognize the evolution of Peru from its historical perspective and the different resources that makes it unique from other countries in Latin America. By providing these inputs accordingly, Ambassador Bravo provided increased not only the ideas of participants in the lecture but also helped each one identify the corresponding themes that have shaped the country for what it is today.

Don't use plagiarized sources. Get your custom essay on
“ Summary of Seminar ”
Get custom paper
NEW! smart matching with writer

The first part of the lecture revolved around the geographical features of the country. In here, the speaker provided four (4) specific and important aspects that shape Peru’s national borders. At the same time, considerable attention was provided to justify its purpose and relevance towards specific functions and the ability to outline its value within the development of life, culture, and society within the region. Here, the four examples include (1) the coast, (2) Andean Mountains, (3) Amazon Jungle, and (4) the Rio Abiseo.

Given these diversity of geographical features, Ambassador Bravo argued its relevance and value in the formulation and creation of culture and life within Peru. It is in here that she tried to outline various histories related to each of these features and highlighted how man have survived through these specific obstacles and influenced the formulation and development of Peru’s identity and culture. All these proved to be beneficial in the next aspect of the lecture wherein she discussed the different cultures and groups that existed within Peru’s geographic borders.

During this part of the lecture, Ambassador Bravo highlighted a chronological elaboration of the different inhabitants of Peru as early as 10,560 BC illustrated not only its rich land and topography but also its capacity to sustain life. In here, she provided specific examples of these early cultures from Chavin, Mochica, Paracas, Wari, and Chimu. Under each groups, she highlighted specific contributions to Peru’s culture and underlined key principles as it relates to their belief system, religion, way of life, social classifications, etc.

All these serve its purpose of redefining and grasping familiar concepts that equally shape identity building and the formulation of artifacts, temples, and sacred sites all distinct with one another. As the lecture progressed, cultures during the pre-Incan period were also introduced by the speaker. Here she depicted numerous contributions from the field of metallurgy towards the formulation of architectural wonders (e. g. Nazca Lines). All these serve to complement the existence of one of the most celebrated civilizations of Latin America – the Incas.

It was through this that Ambassador Bravo took pride in these civilization contributions not only in unifying the different cultures and tribes within Peru but also its ability to establish its own specific order and reality that was depicted in their work. Through their development until the destruction of Francisco Pizarro’s army, the Incas captivated the new world by offering something unique and distinct towards their counterparts during the period. The last part of the seminar referred to the today’s modern Peru and how it continuously adapts to new trends shaping Latin American and the rest of the world.

In particular, Ambassador Bravo outlines specific measures and development from the country’s independence from Spain towards the formation of a Republic. In particular, it outlines specific areas where people engage to trade and commerce. At the same time, it also addresses particular strengths and weaknesses of Peru’s economy. Despite the relatively modern stance of Peruvian society nowadays, Ambassador Bravo argues that there still remains traces of culture and history embedded within principles and values that equally shape and influence the value of how people respond and make decisions.

Summary of Seminar. (2017, May 05). Retrieved from https://studymoose.com/summary-of-seminar-essay 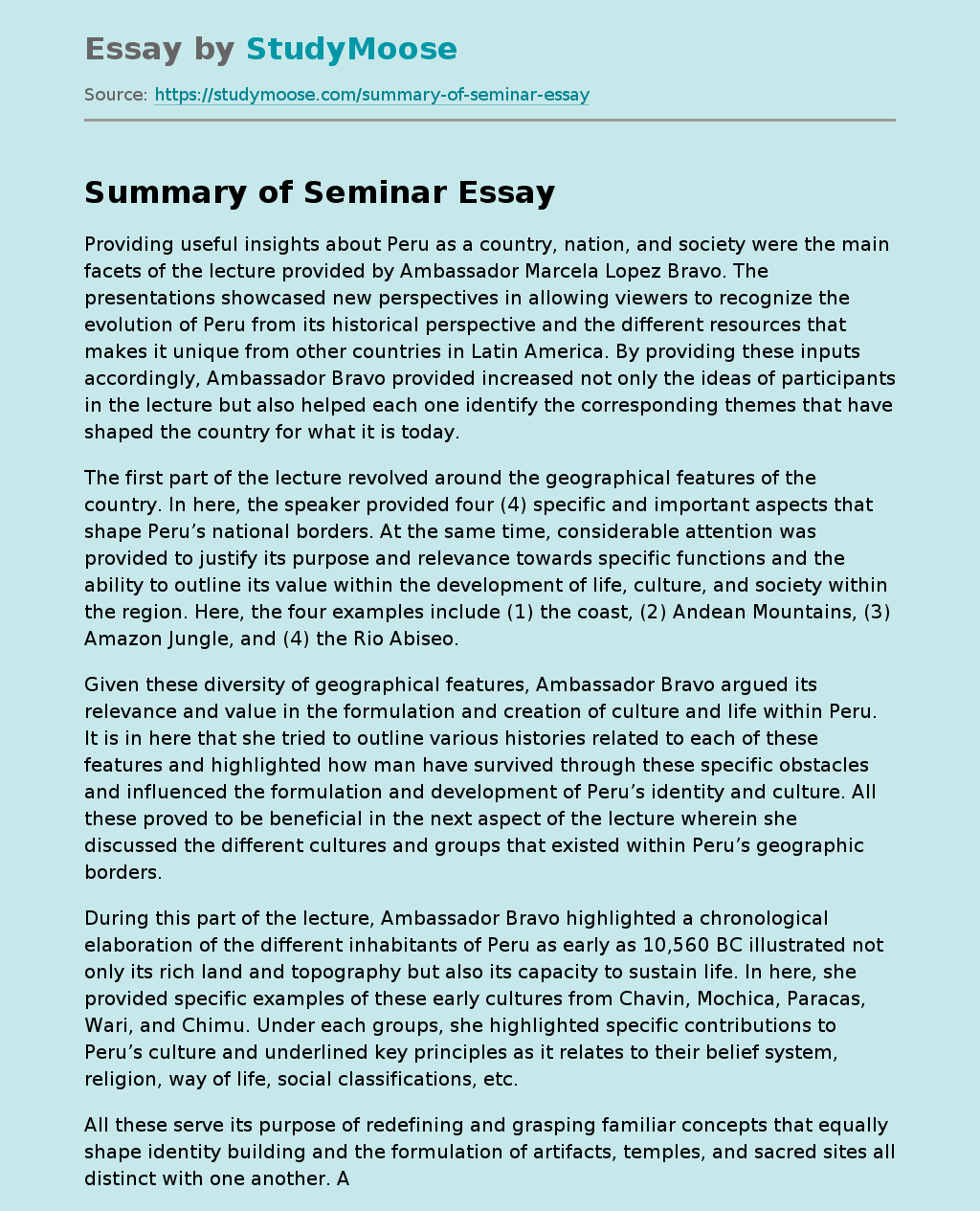