For too long, people have neglected to remember where their culture stems from. The culture that lies in our past is connected to our present and ultimately, our future. Despite the possibilities that learning about our past can offer, there is no limit to how much despair can be found during the search. However, it is because of those faults that allow us to move forward in life. This point of view is the main focus in the poem “Ilu, the Talking Drum,” a tale revolving around the remembrance of the author’s culture.

Don't use plagiarized sources. Get your custom essay on
“ Ilu, the Talking Drum ”
Get custom paper
NEW! smart matching with writer

In any case, we may not be able to look back, but we can certainly move forward.

The main premise of “Ilu” is a tale of simplicity for the most part. It speaks about the simple pleasures of a nice day, beautiful areas, a serene silence, and the beauty of love making. However, with every bright side to a story, there is a darkness that accompanies it.

Simply put, life is easily interrupted by the sight of chaos and the surrounding environments. Tunji, the designated main character of the poem, straps on his ilu, the eponymous instrument of the story, and begins to play a repetitive beat, “kah doom/kah doom-doom/kah doom/kah doom-doom-doom,” as a way to ward off whatever seems to be attacking the characters. At the end, the playing of the drum ends the poem, settling the story on a peaceful note.

The poem, penned by Etheridge Knight, speaks about how something so simple, such as the beat of a drum, can soothe even the most threatening of situations.

It also reveals a few examples of wisdom, such as saying that the simple things in life are often the best. It also plays the reader’s sense of having security and peace, as if they want to be comforted by the thoughts of the poem. It also makes use of racial epithets, but used in a way to convey it as an informal term for an African-American. The story relies on the use of intense imagery, as the poem utilizes a creeping darkness as the principal scene for the story and in a way, the main antagonist. It seems that the overall peaceful tone of the poem is perhaps its greatest strength, as well as its greatest weakness.

One of the poem’s lesser faults is that it is short in comparison to other stories of similar content, but it is most ignored by the reader. Another fault of the story is it is unclear of what the story’s meaning is, even if one were to read it. As a result, it requires much consideration and thought in order to find the basis of the author’s reasoning for writing such a poem. As mentioned earlier, the poem’s inherent weakness makes it target for readers who do not have a taste for such poems, which can potentially turn away much of the reading population. As a result, the story may not see much use in the foreseeable future.

In closing, the poem helps those interested in it to remember the easier times and can help to embrace a more peaceful existence. The story provides guidance and knowledge, which in turn imparts the necessities to lead this lifestyle. A culture cannot survive if all is forgotten, but by reviving its traditions and practices, it will live for all time. 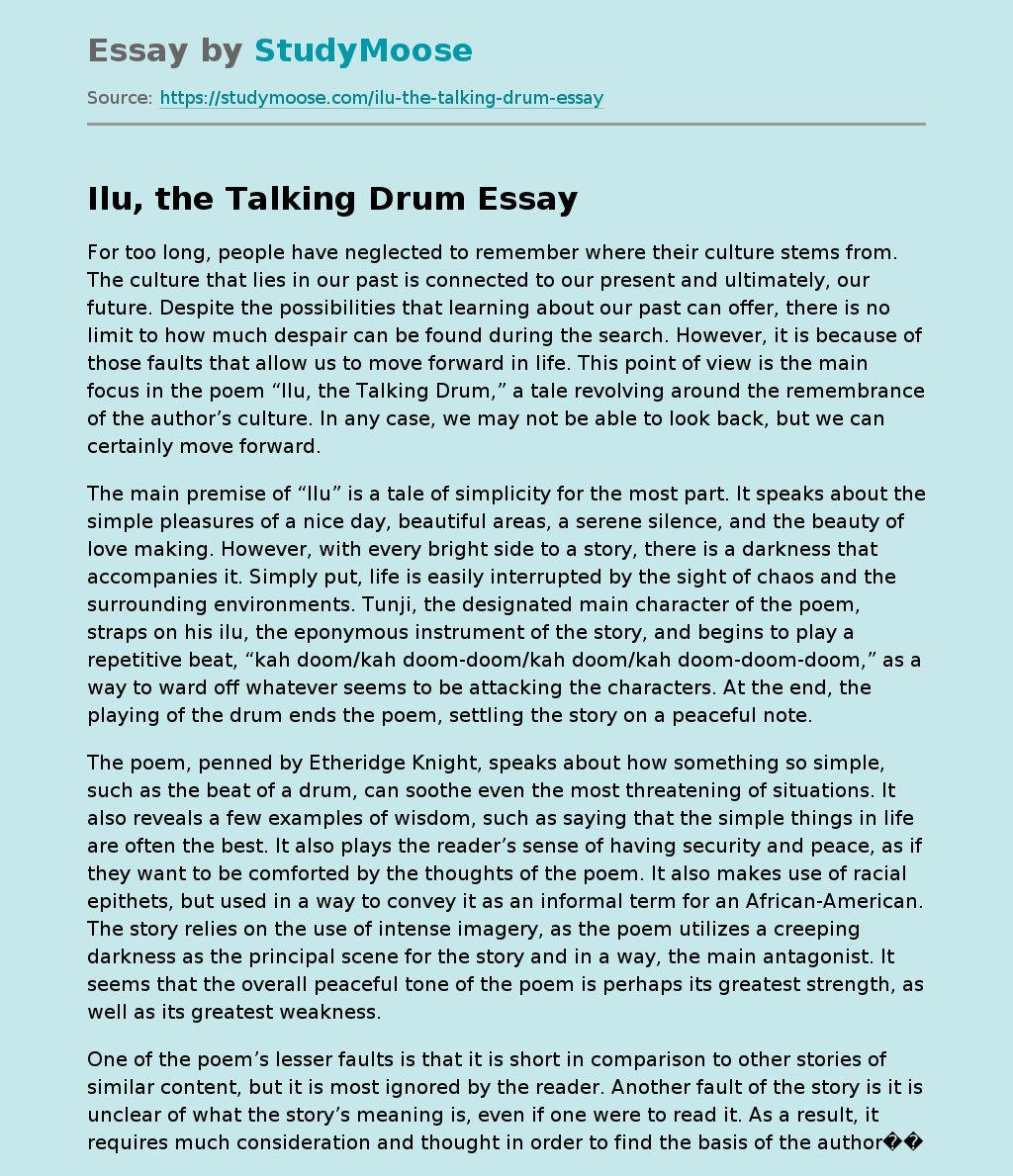