Jane is a character repeatedly subjected to violence and hatred from her adoptive family, The Reeds. Her experiences are scary and abuse her body and her mind and eventually shape her into who she will become later in her life. She is also often undermined and taken advantage of and therefore made to feel small and worthless.

‘Roughly and violently thrust me back – into the red-room, and locked me up there’ demonstrates the cruelty in which Jane Eyre is treated. The use of the power of three on the forceful and coercive adjectives, ‘Roughly’ ‘violently’ and ‘thrust’, creates a heightened atmosphere of destructiveness and attacking due to the repetitiveness of these assaulting and cruel words.

Don't use plagiarized sources. Get your custom essay on
“ Talking About Jane Eyre : the Red Room & John Reed ”
Get custom paper
NEW! smart matching with writer

The repetitive words in the semantic field of fighting also shows that Jane is attacked on a regular basis and these actions are repeated often. The Reeds were harming Jane physically; but they were also destroying and attacking her mentally as well. Locking her in the room shows she is being permanently isolated and excluded from the rest of her family, but could also show that she is being isolated in her mind too.

This abuse and isolation she receives shapes her to be a violent, abrupt and defiantly young lady, which causes trouble for her later on in her life; showing that the Reeds treatment is scarring Jane. The use of the colour ‘red’ also helps build the idea of violence. The connotations the adjective involve blood and violence; and confining her to a room full of these feelings gives the reader a vivid image of the cruelty Jane is subjected to.

There are other connotations, including fire, which is creating an image of Jane mind being burnt because of the terrible way in which she is treated. Also, ‘red’ being a monosyllabic adjective is a short and abrupt word so sounds quite sharp to say adding to the theme of violence.

‘The whole tenor of their conversation, was recent, raw, and stinging in my mind’ Again, Bronte uses the power of three to build up an image of how Jane is feeling giving the reader an insight into what Jane is thinking. The use of the participle ‘stinging’ conjures the idea of being wounded and attacked, as if the conversation hurt and injured Jane. Stinging is also the sensation you feel after an injury, suggesting that the conversation was also having a long lasting effect on Jane. Moreover, the slang of ‘to sting’ means to take advantage of, especially to overcharge. From this we can tell than Jane has felt she have been over powered and belittled making her feel more wounded and insignificant. 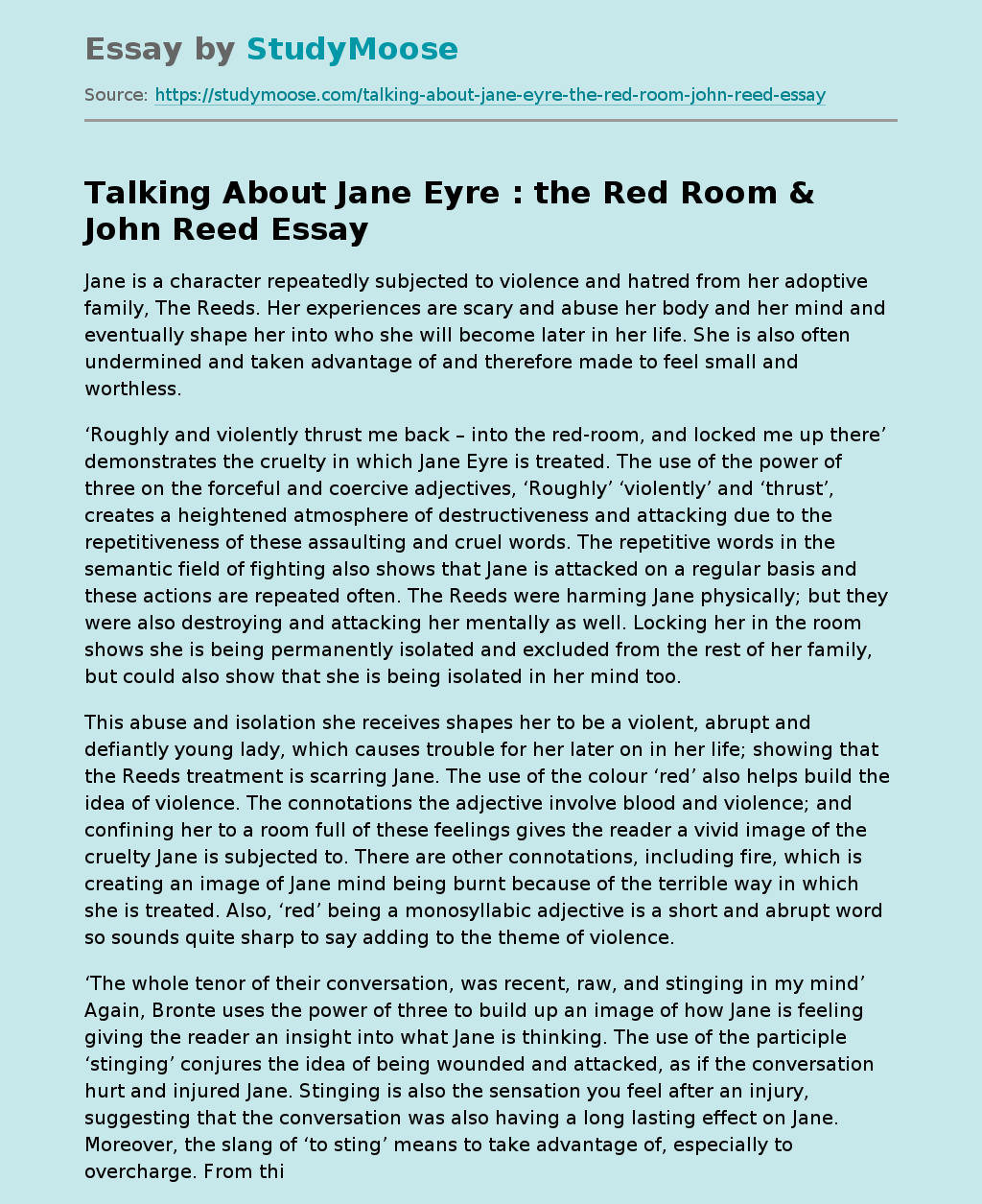