How far do you agree with this claim? Discuss how Bronte uses setting in the novel and the impact it creates both on Jane and the reader.

Bronte is a great believer in pathetic fallacy and throughout the novel we can see how the settings and the weather represent Jane’s feelings and character. Even the names of the places she stays at can show this, for example, at Lowood she is at a low point in her life. The setting is also particularly important during the three proposals Jane receives and it represents how her life would be were she to accept, for example Rochester’s first proposal takes place in a tempting orchard under a passionate sunset showing us that she would lead a passionate life of sin with Rochester were she to accept.

Don’t waste time
Get a verified writer to help you with The Settings in Jane Eyre Represent Stages in the Development of Jane’s Character
Hire verified writer
$35.80 for a 2-page paper

However though the setting tells the reader a lot about what is happening in the book I don’t feel that it shows Jane’s developing character.

However it is impossible to deny that we learn a lot through the settings that Bronte creates in Jane Eyre. The names themselves can show us a lot of what Jane’s life and reaction will be to the place. Gateshead for example conveys the idea that Jane is shut in and trapped whilst also at the beginning, head, of life. One could even interpret it as representing the Gates of Hell and this is enhanced by the punishment that Jane receives and the red imagery that is used, ‘red moreen’ ‘crimson’.

Lowood also suggests a low and dank period of her life, whilst Thornfield suggests something that at first appears open and sunny but with the idea of hidden thorns. One cannot help being reminded through the thorns of roses and this conveys the idea of love and represents the physical pain that Rochester’s love causes her.

When we hear the name Marsh End or Moor House the reader can immediately tell that this is going to be a happier period in Jane’s life as it conveys the idea that it is the end of the muddy and messy period and the beginning of something better where she gains something. Finally Ferndean suggests a soft and mystical place. Ferns are associated with magic and woodland, they are also ever-green implying strength and resilience and the idea that Jane and Rochester’s love can survive all winters. Furthermore the idea of an enclosed wood is enhanced through dean (as in a dene) and this reinforces the idea of the supernatural and Jane’s being a fairy. It is also a very rural sounding name and gives the idea of peace and tranquillity.

These initial first impressions are obviously very important to Bronte and she enforces them throughout each period of Jane’s life through specific imagery, such as the ice imagery used at Lowood ‘ewers to ice’ and the ice imagery used to describe St John. The names could also suggest which parts of life Bronte felt to be best and worst for Jane it is clear that Moor House is where Bronte feels she is in the best position because of her family and fortune as well as her independence. This may also be influenced by the fact that Bronte lived on the moors and found it the most comforting and homely place. However Ferndean’s name suggests happiness in a different way through the idea of Jane and Rochester’s fairytale ending and the immortality and strength of their love through the surrounding ever-green trees.

Despite the names appearing to represent the places where Jane was happiest Thornfield suggests the idea of hidden thorns and physical pain yet Jane describes it as the place where she was most happy and the sense of ‘home-coming’ that she gets proves to us that she was happy despite all the pain she received. It was the first place that she was really free and independent. This is represented through the open ‘green fields’ and ‘picturesque’ surroundings and we can see that Jane likes its ‘seclusion’ and setting, suggesting to the reader that this is a place where she is going to be happy.

The setting at Thornfield does admittedly represent Jane’s growing happiness and independence and shows the development in Jane’s character; however Lowood does not initially show us Jane’s growth as a person because of its dismal surroundings and ‘unhealthy’ nature and her first descriptions of Lowood are of ‘drizzling yellow fog’ and ‘brown decay’. Lowood is the first point when Jane has escaped from Mrs Reed and Gateshead and the setting is more obviously dismal than that of Gateshead implying that Lowood is worse. It is true that Bronte later on describes it as a ‘pleasant site’ of ‘beautiful woodland’. This does not however dull completely our first impression of the place that is where Jane learns all the accomplishments that allow her to be independent in life. This could be representative of the snobbery of the time and the fact that many readers of the time may have felt this to be a bad decision because it meant that Jane lost her social position.

Then again when Jane is wondering the moors Bronte describes the setting quite beautifully with ‘romantic hills’ and a ‘sunny lea’ and this description contradicts the fact that this represents the worst period in Jane’s life that she ‘can scarcely bear to review’ it. However Bronte could be doing this to represent how this experience helps Jane to grow as a character and the pleasant surroundings could describe the happiness that God feels for Jane’s decision. There is always the underlying tone that nature itself is Jane’s friend and will help her so long as she makes the right decisions and this is most obviously seen during this period on the moors.

Nature provides her with a ‘mossy swell’ on which to sleep and some ‘bilberries’ for her to eat. She also describes this as the time when she feels closest to God as she has followed his guidance and now looks to him for more, ‘I felt the might and strength of God’. She also refers to nature as guiding her later on in the novel when she hears Rochester’s voice calling, ‘it is the work of nature’. The innocent setting of this period with its ‘pasture fields and ‘glittering stream’ represents the fact that Jane has kept her innocence and virtue in spite of Rochester’s temptation. The setting is also described as a ‘blackened granite crag’ where only the ‘hardiest species’ survive symbolising Jane’s strength of character and her determination. The reader feels certain that Jane will come through this period of her life and Jane herself feels secure in the hands of nature.

The settings around Jane’s proposals are also extremely important and Bronte uses them to represent how Jane’s life would be with if she accepts. Rochester’s first proposal hints at the temptation in the book of Genesis through calling the orchard ‘Eden-like’ and ‘laden with ripening fruit’. This suggests fertility and sin the ‘furnace flame’ of the sky further more refers to the passionate nature of Rochester’s proposal and his feelings for Jane. The setting and weather is also used to illustrate Jane’s feelings and reaction. The fierce storm that follows the proposal has been interpreted to represent Jane’s feelings and reaction to Rochester whilst others feel that it shows a warning from God. St John’s proposal however takes place in area that is described as being surrounded by a ‘battalion of rocks’. The military imagery used during this proposal reflects the rigidity of Jane’s life with St John and the fact that Jane feels trapped by him into becoming a missionary because of his religious goodness.

It is full of ice imagery and St John’s ‘marble kisses’ and icy replies show the reader that he would quench the fire of Jane’s nature and this combined with the threatening and trapped surrounding convince the reader that this is a bad option for Jane as it would make her less independent. However despite the settings of both of these places suggesting that both men will conquer and ‘claim’ Jane through seduction and tactical moves Jane stands up for herself and declares herself ‘equal’ and independent, thereby showing Jane is still a strong and fiery character even though the surroundings suggest that she will be defeated she has developed as a person and can make her own decisions whilst also being controlled and reasonably polite, which she was not previously able to do at Gateshead, though she is unable to control herself in response to some statements such as when she tells St John ‘I scorn your idea of love’.

The setting of Jane’s final proposal from Rochester I fell represents her future life and the reward she and Rochester are being given for all the hardships they have endured. The setting is open and pure. There is no sign of temptation or entrapment, Jane is completely free and in control. The fields are described as ‘cheerful’ and the sky is ‘sparklingly blue’ and the grass ‘brilliantly green’. These beautiful descriptions show us that Jane has made the right decision and that nature is happy with her choice through the pathetic fallacy used. They also show us that she has managed to keep her character pure and untainted.

We can see that Jane is truly happy and her definitive answer to Rochester’s proposal shows how certain and comfortable she feels. The fact that the setting is further described as ‘a hidden and lovely spot’ suggests that Jane still prefers peace and rural places as opposed to busy ones yet we recognise that as Jane is accepting this she has grown and realised her own preferences whereas when she first reaches Thornfield we understand that she hoped it was nearer Millcote as when she considers accepting the post as governess she describes Millcote as ‘a busy place…so much the better’. This change in opinion shows how Jane has grown to develop her own opinions.

It is clear that throughout the novel the setting represents Jane’s life and her emotions and reactions towards certain events. I do agree with the claim made as it is clear that the surroundings and specifically her descriptions of them show her growth in character. As when she was unhappy she was unaware if the weather being beautiful such as when she left Thornfield looking neither ‘to rising sun, nor smiling sky’. However whilst on the moors and at Moor House she is more able to see the beauty describe her unhappiness such as on the day that St John proposes she is still able to acknowledge and describe the ‘very fine May day’. This shows a greater awareness of the world and her surroundings. Then again the claim is not true for all parts of her life as the original description of Thornfield’s setting would imply that she was going to experience a degradation which through the setting of the proposal we can clearly see is not true. This setting represents Rochester’s melancholy state and not Jane’s character or development.

The Settings in Jane Eyre Represent Stages in the Development of Jane's Character. (2017, Jul 07). Retrieved from http://studymoose.com/the-settings-in-jane-eyre-represent-stages-in-the-development-of-janes-character-essay 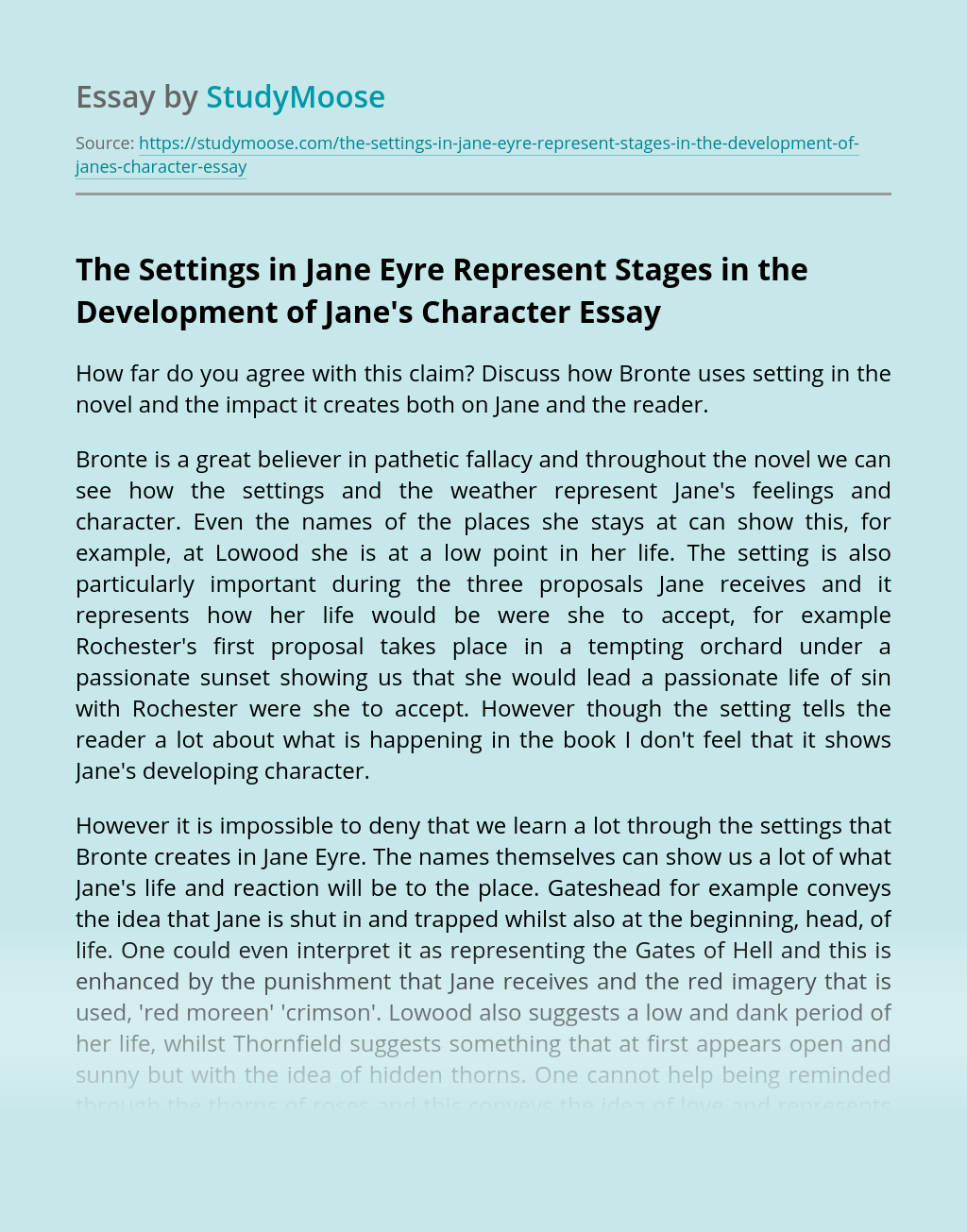 Don’t waste time
Get a verified writer to help you with The Settings in Jane Eyre Represent Stages in the Development of Jane’s Character
Hire verified writer
$35.80 for a 2-page paper
Stay Safe, Stay Original