Reason vs. Passion in Jane Eyre

Reason and passion are two emotions that are shown by most of the characters in Jane Eyre. Some people´s behaviour is governed by rationality and they think carefully about all what they do. The opposite happens with impulsive people who follow their feelings, prevailing passion to reason. Passionate people do not think before performing their actions, because of that they are considered more authentic than people who act guided by reason. However, sometimes passion must be left behind and people have to act according to reason and consciously.

Don't use plagiarized sources. Get your custom essay on
“ Reason vs. Passion in Jane Eyre ”
Get custom paper
NEW! smart matching with writer

This situation is clearly shown in Jane Eyre, the novel written by Charlotte Brontë, in which the two most important characters show strong passion and reason in their personalities. Through conflict, allusion and symbolism the writer tells the story of Jane Eyre and Mr. Rochester.

Conflict is used by the writer to show the collision and disagreement between two persons and also the inside conflict in a person. In the novel a conflict between two human beings is clearly expressed in the relationship that Jane has with her evil aunt Mrs.

Reed. Jane feels humiliated and denigrated by her aunt, she cannot bear any more the cruel treatment and she feels dominated by fury. The writer describes Jane´s behaviour as “..shaking from head to foot, thrilled with ungovernable excitement” (29), uncontrollable and irrepressible as all kinds of passion. The conflict between them is clearly shown by the writer when Jane says, “…I am glad you are no relation of mine: I will never call you aunt again so long as I live.

” (29). The lack of love and the difficult relation between them is evident in those lines. Moreover, Jane´s life is almost always a fight between reason and passion, in the novel the author shows how women in Victorian´s times were not allowed to guide their decisions by feelings or emotions. Restrictions and limitations were ordinary in women´s life and those restrictions were the cause of many internal female conflicts. An example of this occurs with Jane when she says,”…I must renounce love and idol. One dear word comprised my intolerable duty- “Depart!””(279). In this situation Jane has to fight against her passion; against her love and hope to stay with Mr. Rochester
despite knowing that he was already married. Jane says, “..Mr. Rochester I must leave you.” (268) she is concerned about what she must do, even when it does not concurs to what she wants. Guided by her reason she leaves Thornfield and she exclaims, “Farewell! Was the cry of my heart as I left him. Despair added, Farewell for ever!.” The author shows clearly, how reason and passion can produce conflicts with other people and also internal ones.

Allusion is also used by the writer to indicate the power that passion and reason have in the characters´ personalities. Allusion to God and the Bible are common in the novel. At that time people´s behaviour was governed by Christian duties and they had to struggle between those duties and their natural human passion. Jane Eyre is not the only character who shows passion in the novel and also Mr. Rochester has a strong and fervent presence which is demonstrated by the writer in an example when he says, “…By God I long to exert a fraction of Samson´s strength, and break the entanglement like tow!”(267). The reference to Samons,(“the man of the sun”) who is mentioned in the Bible because of his supernatural strength given by God, represents the violent and uncontrollable emotions of Mr. Rochester expressed when Jane tells him her will of leaving Thornfield and him. Furthermore, allusion to God is used many times in the novel and it denotes the importance of religion at that time and the strong belief in God and divine punishments. However, many times Jane´s behaviour is against will of God but also against society´s rules. An example of that is stated by the writer when she says “…I am not talking to you now through the medium of custom, conventionalities, nor even of mortal flesh;-…”(223), it clearly shows Jane´s rebellion and audacity to talk to a man inappropriately. Besides, she says, ..”it is my spirit that addresses your spirit; just as if both had passed through the grave, and we stood at God´s feet, equal,-as we are!” (223) here it is expressed a divine equality and at the same time the human passion which does not know about reason. On the other hand, allusion to God also expresses the power of faith in guiding Jane to follow her reason and an example of that is given when she says: “I will keep the law given by God; sanctioned by man. I will hold to the principles received by me when I was sane, and not mad- as I am now.” (280). Jane´s madness is actually her
passion, her love and the law of God is the sensible behaviour that she has to have, and even which she used to have. That conscious and prudent conduct is her reason, which represents the will of God. Moreover, when she leaves Mr. Rochester her last words are blessings, she says, ”God bless you, my dear master!” (281). It states her strong belief in God and the peace of the right decision making. Those allusions to God represent the importance of religion in that period of time in which the novel was written and how it influences in people´s reason and passion.

Central character´s personalities are well developed through fire, symbolism of passion and water as symbolism of reason. Fire represents passion and sexual appetite in the character of Bertha Mason, Mr. Rochester´s wife, who sets fire to his bedroom. That scene is described by Jane, who says, “Tongues of flame darted round the bed: the curtains were on fire. In the midst of blaze and vapour, Mr. Rochester lay stretched motionless, in deep sleep.” (130). The fire around the bed is a clear representation of sex and passion and it is reasserted when Mr. Rochester describes Bertha as “intemperate and unchaste” (270) which are adjectives related with uncontrollable passion and sex. Then another incident is the fire which destroys Thornfield and in which Bertha dies and Mr. Rochester goes blind. A host tells Jane the story that happens two month after her departure and he says,”…she sets fire to the hangings of the room next to her own (…) and made her way to the chamber that had been the governess” (378). It reflects Bertha´s intention to kill Rochester and Jane´s love and represents the danger of uncontrollable feelings. On the other hand, water symbolizes the extinction of fire and the reason that defeats passion. It happens when Jane saves Mr. Rochester´s life in the bedroom fire and she says, “I rushed to his basin and ewer; fortunately,(…) both were filled with water. I heaved them up, deluged the bed and its occupant” It states Jane´s intention not to follow her feelings towards Mr.Rochester but act guided by reason. Moreover, she says, “by God aid, succeeded in extinguishing the flames”, which indicates Jane´s will of acting guided by religious rules and extinguishes her inappropriate love. Fire as imagery of the danger of improper feelings and water as representation of reason and death of passion tells the character´s personalities.

In conclusion, Charlotte Brontë exposes through conflict, allusion and symbolism how passion and reason are the guide of characters´ behaviour at different situations in the novel. Jane as a child and when she is treated unjustly is guided by passion, but then when she grows up she learns how to control her passionate emotions. However, in some situation she is not able to do it and reacts with rage, for instance when Mr. Rochester tells her that she has to leave Thornfield. In contrast she follows her reason when she knows that he is already married, but it is possible because of her strength and religion belief. She takes the hard decision of leaving her love, faces an uncertain reality and only comes back when Mr. Rochester is widow. He ends up being a partial dependent husband because of his disabilities and it could be interpreted as a punishment for his excessive and improper passion. It is not a classical romantic novel but the romance genre is predominant and in the end love survives dangers and difficulties.

Reason vs. Passion in Jane Eyre. (2016, Mar 30). Retrieved from https://studymoose.com/reason-vs-passion-in-jane-eyre-essay 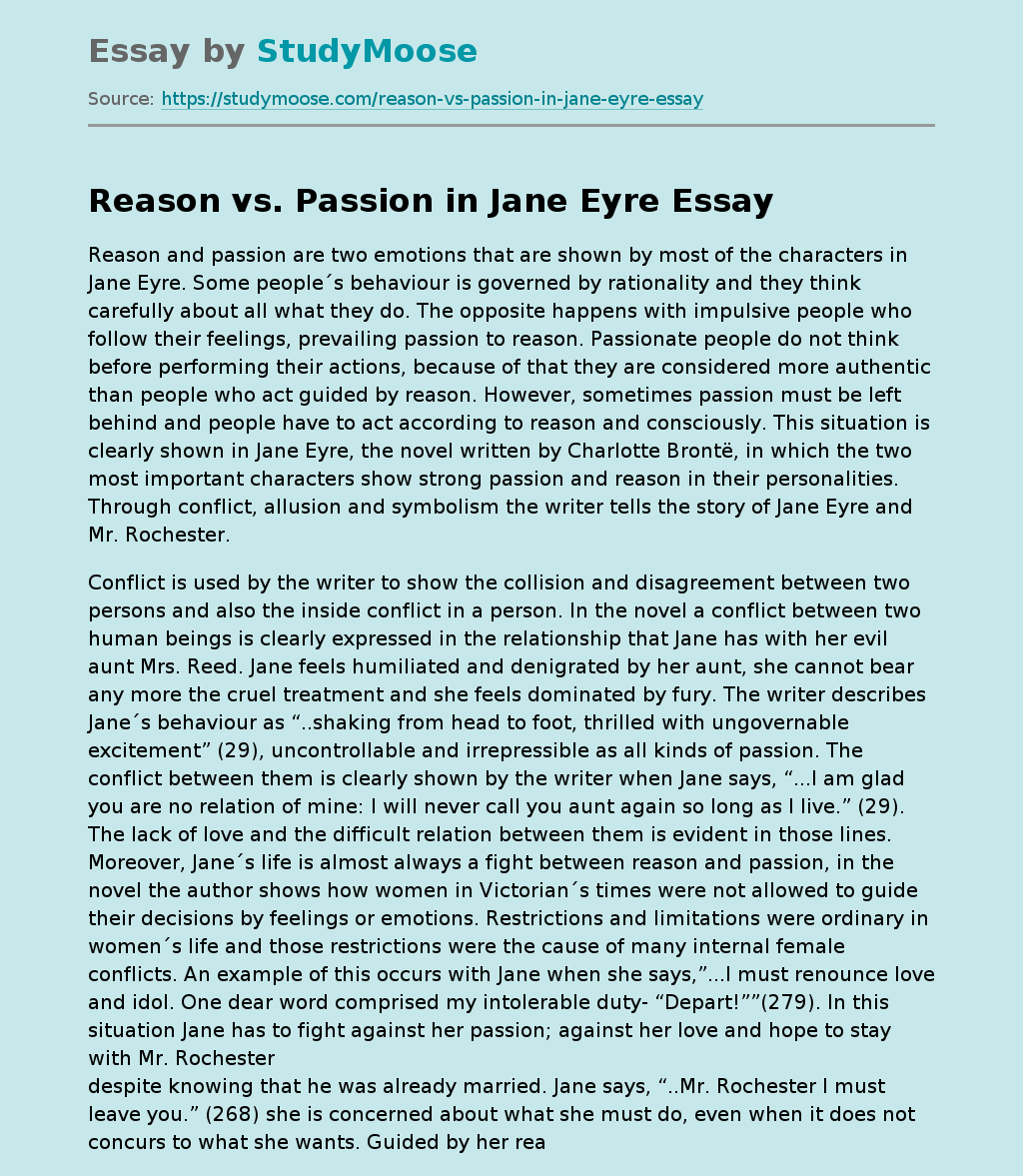