Hamlet- Shakespeare dramatises the tension between Passion and Reason

Acts of passion and acts of reason can be differentiated by a sense of underlying tension, Shakespeare’s ‘Hamlet’ published in 1601 explores these universal ideologies by dramatizing this underlying tension. ‘Hamlet’ presents challenging representations of the traditional values of passion and reason through their varying forms. The representation of these concepts coupled with dramatic tension conflicts with traditional plots of the Elizabethan era thus creating a sense of enduring value. The various depictions of dramatized tension that underpin the play, allows issues of passion and reason to flourish throughout as is the intention of Shakespeare.

Don't use plagiarized sources. Get your custom essay on
“ Hamlet- Shakespeare dramatises the tension between Passion and Reason ”
Get custom paper
NEW! smart matching with writer

Tension emphasises how acts of passion must incorporate elements of reason in order to confirm that the act is in fact righteous. This is true to the philosophical outlook of Humanism, during Shakespearian times, a practice that emphasized reason and human fulfilment in the natural world often rejecting religious beliefs. Hamlet struggles with acting in accordance with his Humanist elements or reverting back to his traditional religious ways, Act One, Scene V, effectively introduces this link between passion and reason exacerbated through underlying tension.

The device of the Ghost initially symbolises the disruption of the Great Chain of Being on which the Elizabethan society of the epoch was founded due to the tension created by the passionate crime of Claudius for the throne. The Ghost explicitly introduces these concepts through its initial contact with Hamlet and its repetitious, blunt language ‘So art thou to revenge, when thou shalt hear.’ Hamlet’s love for his father allows him to inherit this want to commit the passionate act, evident through his metaphorical language which depicts his submission to his father’s will ‘Haste me to know’t, that I with wings as swift as meditation or the thoughts of love may sweet to my revenge.

’ Hamlet’s response is ironic and juxtaposes itself as notions of tension heighten his self-division to act with desire or intent.

Though Hamlet wishes to act passionately, his religious beliefs which condemn ghosts along with his Humanist beliefs to not act without purpose lead to his state of inaction. The scene elucidates how reason has aided his prolonged struggle between his identity as a Renaissance Man of Thought and Chivalric Man of action. This representation of passion and reason dramatized by tension allows the play to develop demonstrating how acts of these emotions are riddled with ardent desire that is plagued with logic of Shakespearian autonomy. According to conventions of Elizabethan Theatre braggart soldiers usually played the role of the protagonist, Shakespeare challenges this by employing an intellectual scholar as the lead. Through the character of Hamlet, Shakespeare crafts passion as a catalyst to act by the requests of the ghost, however portrays the intellectualisation of reason as an inhibitor of this will to act. Hamlet’s soliloquy in Act Two, Scene II, exhibits the dilemma of the human condition through his psychological tension between public and private duty caused by the love for King Hamlet. Hamlet ironically exclaims ‘O what a rogue and peasant slave I am!’, chiding and degrading his principals and stamina. Hamlet’s conflict is depicted through rhetorical questions which connote doubt and the direct address of images representative of hell, illuminating the confusion of definite morals as a product of reason ‘What’s Hecuba to him, or he to Hecuba, that he should weep for her?’. Hamlet’s repetition of Hecuba alludes to his questioning of Christianity and religious faith which reflects the Elizabethan society of the epoch.

Hamlet evidently creates an argument against himself creating a distinguishable divide in thought process, indicated through the conjunction, ‘Yet I’. This product of contemplation is portrayed as the driving force of the conflicted soul of Hamlet. Recurring motifs of emptiness ‘And all for nothing?’, ‘And can say nothing’, and the repetition of nothing creates a cyclical tone in argument that reinforces contemplation as a form of procrastination from concluding the rivalry with Claudius, thus highlighting the dichotomy between action and inaction and subsequently passion and reason. Hamlet’s confliction is further exacerbated as he metaphorically states that he is ‘prompted to my revenge by heaven and hell, must like a whore unpack my heart with words.’ Consequently blurring the divide between moral and immoral actions as his revenge has been instigated by heaven in its war against the working of hell, visible in Claudius’s achievements. This presents a challenging view of desire and motivation can be halted by reason. Hamlet’s characterisation as continually self-berating and his inaction are counter-acted by the concluding rhyming couplet ‘The play’s the thing where in I’ll catch the conscience of the King.’ The rhythm of the metaphor alters and gains momentum and speed as Hamlet is presumably spurred into action emphasising the developing tension, presenting another challenging dimension to the concept of influence on moral and corrupt supremacy in the 17th century.

The play captivates audiences as it presents the light and shade surrounding the complexities of passion and reason, as presented through the dramatized tension allowing the responder to question the values of the time. Order and Hierarchy were prevalent aspects in Elizabethan society, Shakespeare usurps this concept making it a key source of tension throughout the play. In ‘Hamlet’, Claudius’s passion for power causes him to commit regicide, an act regarded as sinful at the time and thus causes his emotions of remorse which challenge the nature of his Machiavellian character and defined distinctions of morals. In Act Three, Scene III, Claudius, uncharacteristically overcome by a deep sense of guilt soliloquises metaphorically confessing ‘Oh my offence is rank, it smells to heaven; and hath the primal eldest curse upon’t, a brother’s murder.’ The biblical allusion to Cain and Abel reinforces the religious undertones which contribute to Claudius’s realisation of his fatally flawed morality caused by his notions of reason and identity as a Machiavellian character. The combination of Christian and Pagan imagery further connotes the notion of tension, challengingly strengthening the passion for self and power as the cause of rivalry and self-division through reason. Through the alliterative comparative adjective ‘My stronger guilt defeats my strong intent, and like a man to double business bound’, Claudius’s internal struggle is revealed through the simile as he is trapped between the dichotomy of two alternatives which are driven by Hamlet’s intent to obtain revenge. The notion of defeat also suggests battle which connotes his enthrallment of his inner conflict produced by passion. These literary devices are thus used to emphasise the universality and value of the diverse perceptions of passion and reason presented.

Furthermore, through the soliloquy of Claudius the valued ideologies which plague thought are depicted as a product of the passion of power. Claudius’s crime exemplifies the fundamentally corrupt nature of the Divine Right of King. The hyperbolic interplay of juxtaposing light and dark imagery in the metaphoric rhetorical question ‘What if this cursed hand were thicker than itself with brother’s blood, is there not rain enough in the sweet heavens to wash it white as snow?’ illustrates the irrevocable evil that Claudius has committed in the murder of King Hamlet, an act of passion later questioned by notions of reason. It is additionally a mortal sin, biblically in all cultures and eras to commit murder, bestowing the play with its universality. Claudius concludes the soliloquy through the exploration of binary opposites and religious allusions ‘My words fly up, my thoughts remain below. Words without thought never to heaven go’, which reinforce Claudius’s deliberate humanisation, contributing to the complexity which underpins the characterisation of all Shakespearean characters and reflective of the notions of reason present during the Elizabethan era.

This complexity illuminates the challenging presentation of the traditional values of passion and rivalry. Hamlet is hence a universally valued text because of its diverse representation of traditional values which challenge the audience. Through the initial introduction to the Ghost the intertwining nature of passion and reason exposed through tension, challenges the notion of these concepts as separate values. The soliloquising of Hamlet in Act Two, depicts the over intellectualisation of passion as a product of reason, and its devastating consequences conveying a less idealised view of passion which challenges audiences. Moreover, the soliloquising of Claudius in Act Three further reveals an act of passion as a product of reason, presenting a diverse challenging perspective. These notions which oppose tradition bestow Hamlet with its value derived from its universality.

Hamlet- Shakespeare dramatises the tension between Passion and Reason. (2016, May 17). Retrieved from https://studymoose.com/hamlet-shakespeare-dramatises-the-tension-between-passion-and-reason-essay 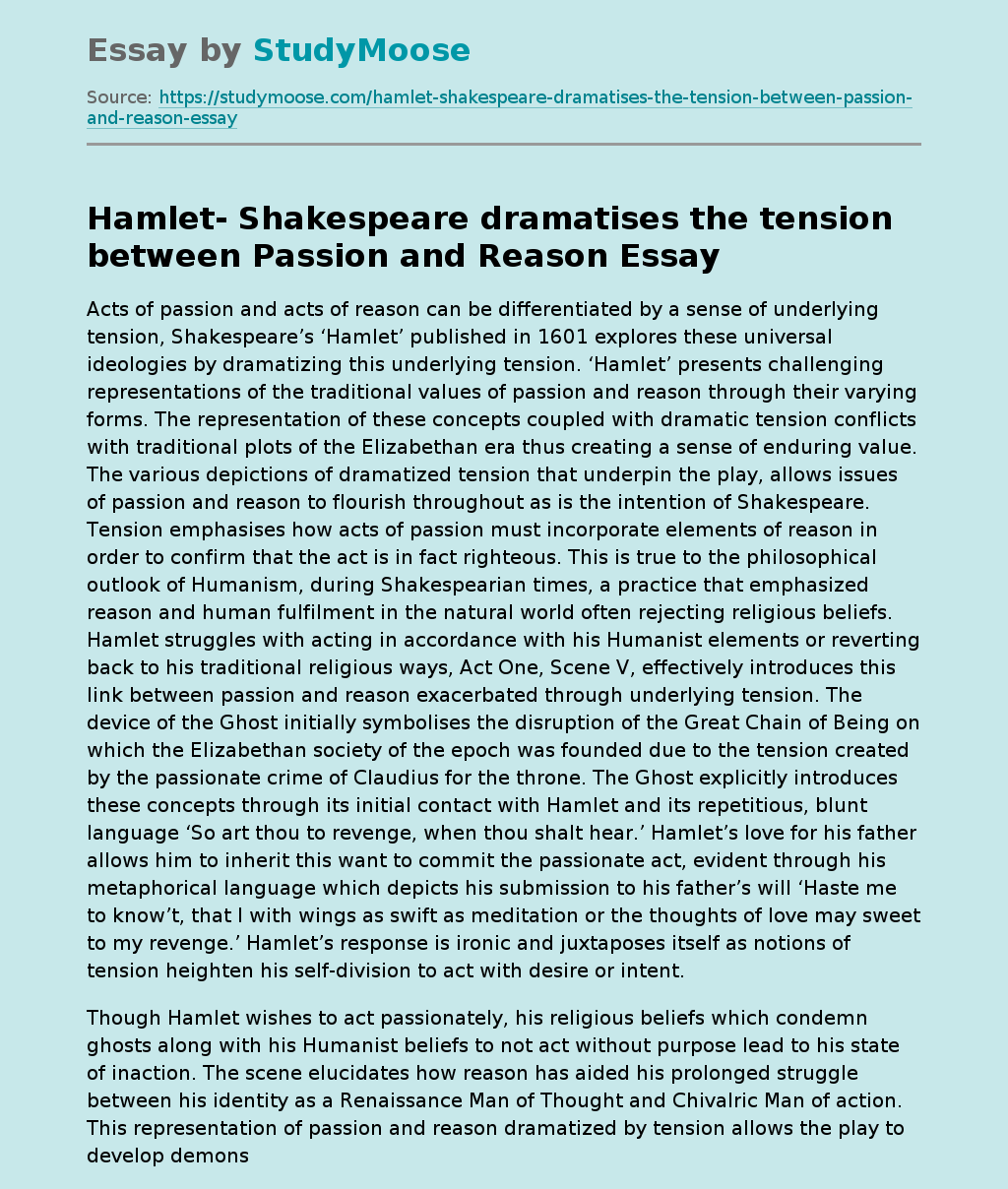