Being a society that still holds true their traditional values, India will seem to dislike Western movie that has obscenity scenes in it like Baywatch and some movie where language are expressed freely such as the cartoon Beavis and Butthead and the American hit Jack Ass. Failure to recognize that issue can result in severe damage for multinational companies, as people would think they are trying to bring bad influence to the ethnocentric society. Star TV learned that lesson by getting a lawsuit and a ban to enter India for Mr.

Don't use plagiarized sources. Get your custom essay on
“ Traditional values ”
Get custom paper
NEW! smart matching with writer

India as a collective and diffuse culture “Iindividualism is often regarded as the characteristic of a modernizing society while collectivism reminds us of both more traditional society and the failure of the communist experiment. ” –Fons Trompenaars from Riding the Waves of Culture India as a collective community meaning that most of the people feels that they belong to a group of people coming from the same background, religion, believe and culture and thus have shared responsibility and would not do extreme things to jeopardise their relationships.

As a result of this, the Indian community regard peace highly and live closely together. This is shown by how most Indian families stick together, take care of each other and support their children up until at least they got married, unlike most Western families. The collectivism culture can be a source of competitive advantage for Star TV if they are to design family entertainment programs that are suited for the entire family watching.

Movies about typical happy families and traditional love stories or even movies with happy endings will most suited the traditional collective community in India.

Star TV can also target their advertisement not to individual group, but to advertise to fathers, mothers, children and they would want to be accepted by the majority of people there. In collective society, decisions are made based on group consensus and they have respect for collective opinions, therefore they want to appeal to as much people as possible. Societies with collective culture also takes responsibilities together and regard achievement as a group effort rather than individual effort.

Star TV in designing its company structure should also take that issue into consideration because it will affect how employees going to stay and be productive in the company. For example, in designing the reward system, they do not want to focus on too many pay by individual performance system that can disrupt the company’s moral for the under performer, but instead they would want to design things that could improve the employees cohesiveness. Bartlett and Ghosal Framework Analysis for Star TV Star TV as a global company

The ethnocentric mind of Star TV made them unable to recognise the existence of different culture with their linkage to strategy. A company adopting the global strategy, like Star TV did first entering India focused on cost efficiency and strive to reach economy of scale by its products with minimum local adaptation present all over the world. However, the technique will be different from product to product as there is big difference in each products usage and needs throughout the culture. The need for national differentiation varies according to the type of product with respect to consumer usage.

Universal products such as appliances, vehicles, furniture, electric products etc. need only minimal local adaptation because the usage is universal throughout the world. As opposed to that, some personal products such as toiletries, cosmetics, food and even TV channels need a lot of tailoring to reflect the local usage and habits. The second category of products involves personal habitual usage and there are some cultural difference in the way people across different cultures use it. Especially for consumer product such as Star TV is categorised, there is really high need for national differentiation and responsiveness.

Example of product adaptation is Red Rooster opening up in India would want to serve curry soup in their restaurants or serve some Indian rice as part of their meal. In the contrary, when Philips decide that they want to enter India, they do not need high product adaptation as the usage of the products are the same throughout the world, the only thing they need to do to sell TV abroad is to write instruction manual in different language and adjust the power voltage accordingly. Star TV neglects the fact that their products need to suit up or at least go together with the traditional societies in India.

If Star TV has made a better effort in understanding the traditional society, they would have came up with more Hindi language programs with more mild themes. Mild themes here could be, old-fashioned love stories, family oriented movie themed, because most of the community in India belongs to more collective culture where they watch TV together as a family. All of those themes reflects more to the traditional Indian society and would be easily accepted by them. Transnational solution What makes Star TV is successful at last is the effort in being a transnational company as Bartlett and Ghosal called it.

In the Transnational company, centre of command is decentralised into different regions and decisions are made locally with local considerations. The key product is standardised, like the famous western movies and sitcoms as broadcasted through Star Movies India and Star World. While secondary programs such as game shows like the hit Who Wants to be a Millionaire which use the International concept but translated into Hindi and hosted by a famous Hindi host, music television, and general entertainment are customized in Hindi language or at least having a local sourcing such as Hindi broadcasters or hosts.

Star TV as a transnational company also characterised by the big role of overseas operation of Star TV India, in the local company lies the future strategic plan for the operation, integrating key competencies from parent company and developing new competencies that emerge from local market opportunities. Recommendations Based on the analysis of the link between culture and strategy, there are several recommendations that can be made in order for Star TV to be more widely known and accepted in the Indian community. 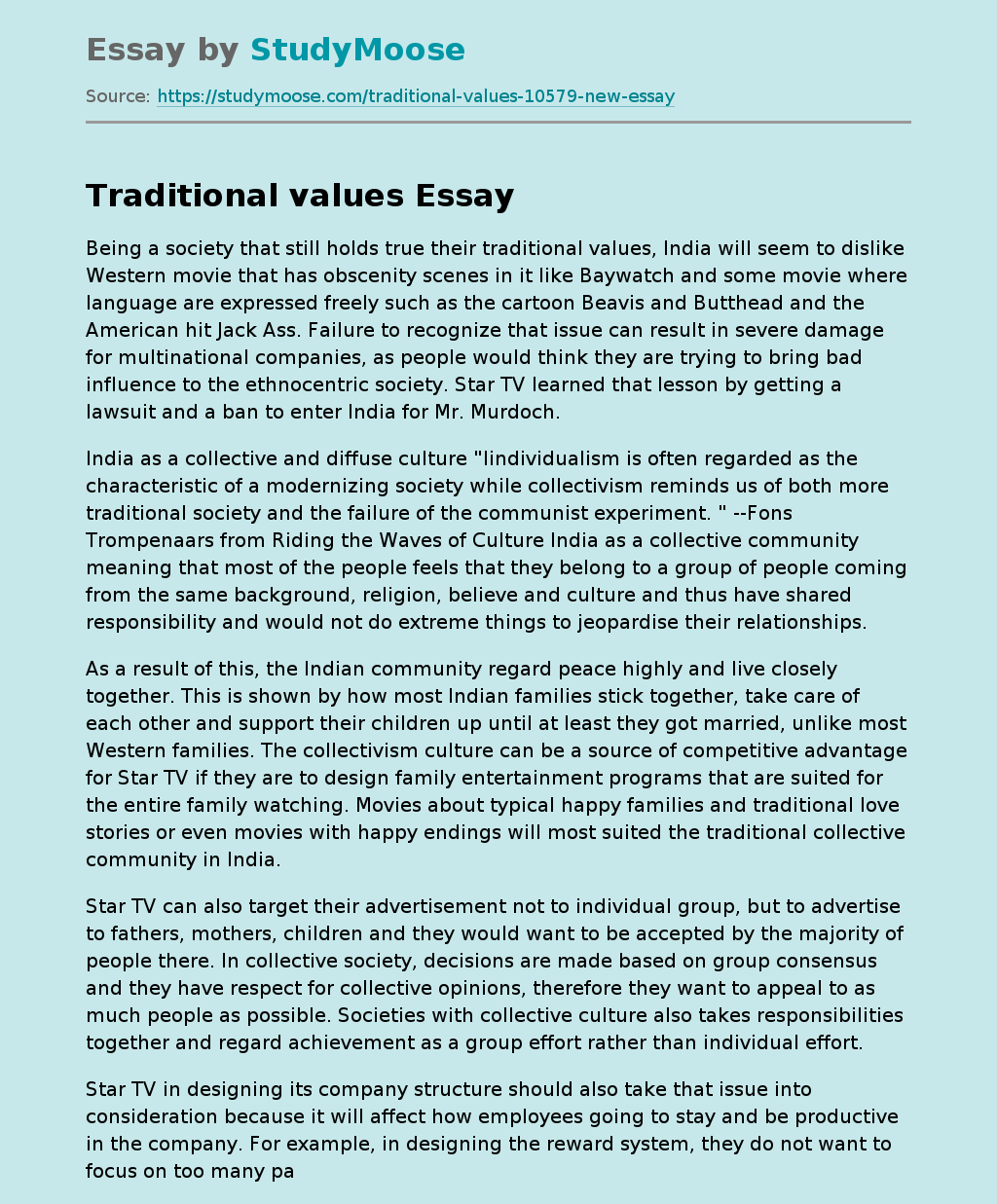