There have been a lot of conflicts in using the traditional management accounting practices. It has been proved that this certain practice could no longer function or holds its other aspect because of the technology innovation or the continuous changes in technology.

A lot of new strategies were proposed and introduced to the accounting environment regarding how to make use of the renewed or improved version of management accounting aspect. In this coursework, my aim is to discuss one aspect of traditional management accounting focusing on variance analysis such as to explain the old practice, what has been the problem, what changes are made, and also the result of renewing it.

I will explain the main focus of this article and provide the reasons and evidence of its development so as to provide the conclusion if it turned out to be really effective in the field of management accounting system. For people to easily comprehend Variance analysis: it is explains by the means of scaling and rewarding purchases on the means of Purchase Price Variance or PPV which focuses on the means of quantity discounts.

All through this coursework, I will provide important details about variance analysis and its effectiveness so as to how it is used and what changes were made to it to cope up with the technological innovations. I also included some evidence that indicates the effectiveness or failure of the stated revision of the traditional management accounting practices.

Variance analysis is a scale which creates a systematized approach to the difference estimation or comparison of the actual costs and the budgeted costs and even the income or the revenue during the period of an organization’s production (managerialaccounting.

In a certain organization which is said to be stable and well run, one of the essential aspects of its management accounting is the performance measurement. This is said to be important because performance measurements hold and provides the confidential information such as which is effective and which is not (Northonline, 2007). Performance in a certain organization is considered as “standards”, a standard cost system is the one who holds the records of both performance and actual cost. This system is the one which facilitates the analysis of a variance or is explained as the difference or the analyzed difference between standard and actual costs (Northonline, 2007).

It is said that any means of difference between actual cost and standard cost produces or makes a variance. This said variance may be expected either a positive or a negative variance result (Northonline, 2007). Variance analysis is exemplified and explained by the means of scaling and rewarding purchases on the means of Purchase Price Variance PPV which focuses on the means of quantity discounts (FindArticles, 2007 ).

It is said that in order not to experience negative variances is to purchase by large amount into which you’ll be able to attain large quantity in a small account or the means or lowering the cost and acquiring large quantity. This practice tends to lead on creating an excess inventory balances (FindArticles, 2007 ).

General Variance Analysis Model
• The PV or price variance is the one that shows the difference between an actual price remitted and a standard price (Northonline, 2007).
• The variance of quantity QV or variance quantity is the one that measures or scales the actual quantity consumed compared to the standard account of quantity which is allowed for the production/“OUTPUT” of the period (Northonline, 2007).
Figure 1
ACTUAL COST OF STANDARD COST OF STANDARD COST OF
ACTUAL QUANTITY OF ACTUAL QUANTITY OF STANDARD QUNTITY
INPUTS INPUTS OF INPUTS
PRICE COMPONENT USAGE COMPONENT

It has been proven through a lot of studies that the tradition cost and management accounting practices turned out to be unreliable because it became inefficient in some aspects and it lacks the capability to cope up with the needs of a continuously changing environment for the past two decades. This said criticism refers on the lack of capability of the traditional management accounting practices to serve a complete detail regarding with the activities which is essential for the organizations (Askarany, 2006).

According to Bork and Morgan during the year 1993, the traditional cost and management accounting structure did not succeed to cope up with the elevating rate of demands implied to them by technological innovation in such manufacturing industry. They also said that providers and users of cost accounting are dissatisfied with their techniques (Askarany, 2006).

Focusing on the variance aspect, the scale use for determining variance is the standard cost concept which is generally based on the traditional managerial means of reporting. It does have advantages such as improved cash and inventory planning concept, it also have the means to support the activity of such accounting-based work evaluation, and other more.

On the other hand, disregarding all its advantages, the traditional variance analysis system called as the standard cost concept still cannot cover all aspect of efficient matters which should be scaled for the need of the organization. These disadvantages are consisting of interpretation of an error free variances and the concentration of the authority personnel or organization to decrease variances may not turn out into effective working process (2007).

Because of the many factors that traditional management accounting practices could no longer function, a new developed for of accounting was introduced. This new accounting system is called the Activity-based Costing or ABC (Dekker, 2001).

ABC is said to be focused o a day-to-day basis of business operations or business performances which is directly connecting all the essential information of production costing to the general record so that there would only be a single record to which they could rely on. It also serves the ability to mark the production cost by simplifying cost production into complex activities (Dekker, 2001).

Activity-based costing is designed to discipline certain made strategy plans, tracking, production performance, and profitable pricing or productive pricing information. It is also explained as the costing system into which it provides internal operating effectiveness (Dekker, 2001).

ABC have four designed modules, the first one is the process flow or scheduling or PF/S, the second one is the technical performance measurement TPM, the third is the activity revenue/ cost tracking module AR/C, and lastly the input/output capacity planning I/OCP (Dekker, 2001).

It is indeed true that the traditional management accounting practice has been given an alternative into which the new one would cause effectiveness in such an activity hence Chenhall and Langfield-Smith’s study on the year 1998 stated that the usage of the suggested innovations are rated low and the rate of its adoption is surprisingly far behind the former traditional management accounting practices.

These two researchers’ findings also shows that in the Australian country, only few adopted and tried ABC which is rated on the 24th rank compared to the old practices in which such as planning financial on the 1st rank, capital budgeting ranking 2st, and return on investment on the 3nd rank. By the end of the year 2002, according to Askarany and Smith, Australia only rated 19 of the organization’s percentage who have been registered as a certified public accountant, accepted and implemented ABC. In Chenhall’s study, ABC was rated lower than 14% in connection to the adoption of it in certain management accounting practices (Askarany, 2006).

However, the new designed system turned out to fail in some of the important aspects such as accuracy of records on variance analysis in a way that the system consists a lot of measurement errors.  After a lot of revisions and developments, the effective designed system was now a combination of the traditional practice and the ABC system so that variance analysis or analyzing variances will gain an error free result. ABC was then renewed to another model which made their system less complicated by lessening the activity involved in such measurement (2007).

(2007)
This measurement scale shows the difference between the scale made by traditional measure and the ABC.

The management accounting systems encountered a lot of conflict that caused different revisions in time inline with the innovation of technology. ABC was made to improve the traditional style of measuring production hence the new strategy was as ineffective as the first system. The newest model of ABC was then made more reliable than the first one which depicted a lot of error because of its limitations.

Therefore the primary aspect which is important to an organization is the variance accuracy which the sales and production development depends on. And in order to provide for an error free variance analysis, ABC was studied by more critics and suggested appropriate revisions. The traditional management accounting practice has been obviously inappropriate because it has many aspects which it could no longer cover. In order to cope up with this accounting problem, accountants generated new system such as the ABC hence the new system did not work out. 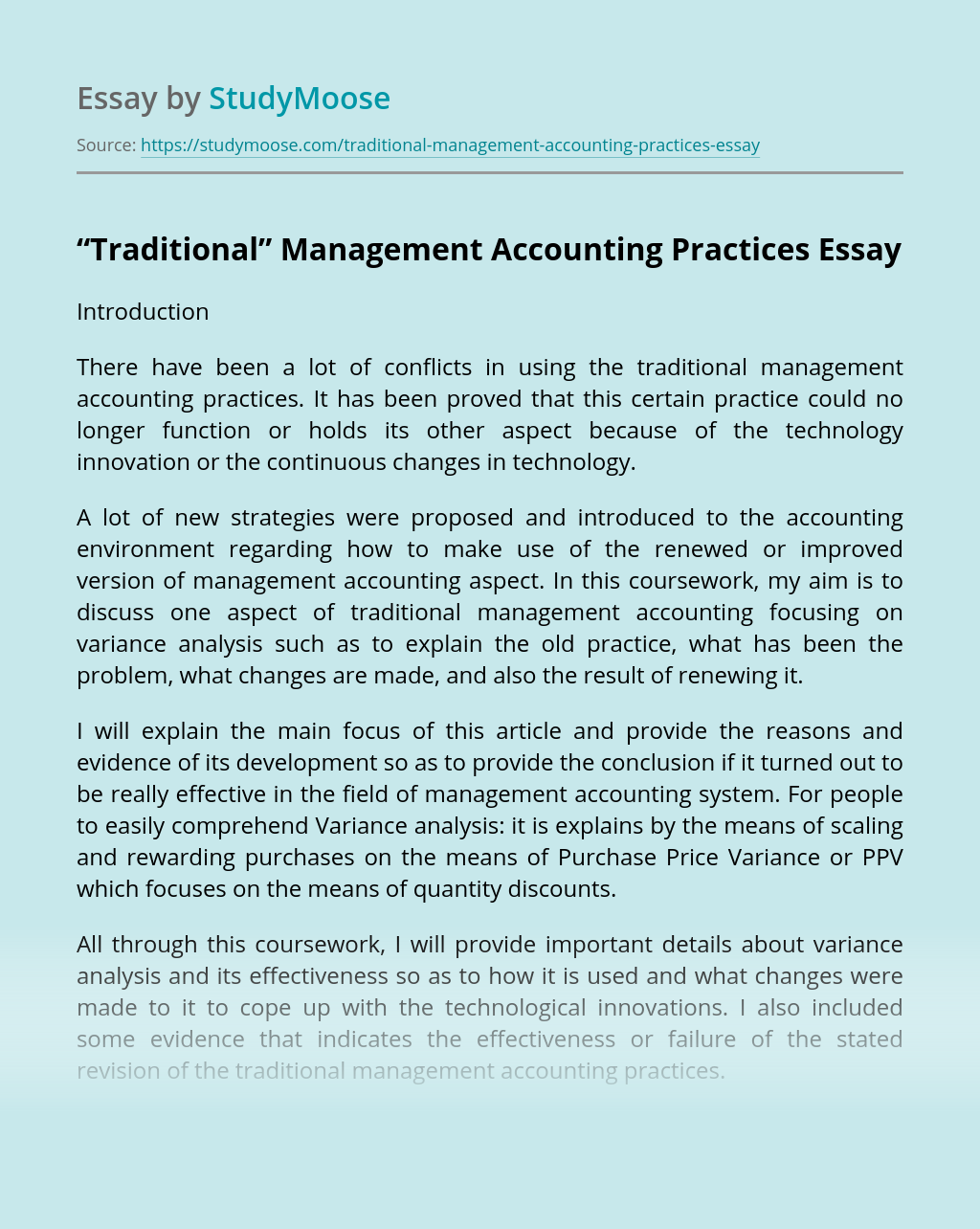