Marriage in Traditional African Society and It's Televance

The African marriage is full of deep-rooted culture that cannot be wished away. African culture and traditions are handed down from generation to generation. The African marriage is an integral part of the whole African culture and was a rite of passage for every mature man and woman. In African tradition, marriage was done after someone had gone through the adolescent stage where different lessons on respect, morality and upholding the tribes culture and traditions. Once the man found a lady who was willing to marry him and of his choice, the man and his kin would go and visit the lady’s family and get permission from the bride’s parents.

Turn in your highest-quality paper
Get a qualified writer to help you with
“ Marriage in Traditional African Society and It’s Televance ”
Get high-quality paper
NEW! AI matching with writer

He would visit the home with a few of his peers and they would wait in the simba (bachelors hut) as the man went to get confirmation from the bride’s family. If he received good news he would come back and tell his peers. This traditional practice is still relevant as it is respectful for a suitor to get permission from the bride’s family if he should marry their daughter.

Though not compulsory in today’s society, it is a good show of faith from the bride’s family that they entrust their daughter in the man’s hands. The dowry ceremony which was known as Ayie (which means I agree). The man’s family would visit the woman’s homestead. It is on the Ayie ceremony that a groom officially meets the parents of the bride for the first time; all other visits that could have taken place prior to the Ayie ceremony are unofficial and in some cases may attract disciplinary action on the groom.

If a groom visits the parents of the bride but without the intention to pay Ayie during the visit, he may be considered undisciplined, as his action may be interpreted as arrogance or prematurely show off his relationship with the bride to her parents to time, although the mother of the bride may negotiate a higher price whilst the groom may also negotiate a lower price.

The dowry ceremony is still relevant in today’s society as it’s a sign of appreciation to the bride’s family for taking care of her. Polygamy in traditional Luo society is rampant. The man was allowed to marry to marry as many wives as he wished. This practice, though now constitutional is irrelevant in that most Luo men of today are Christians and conduct religious wedding ceremonies which forbid the union of a man to more than one woman. The practice is also expensive and does not cater for the needs of the women in the relationship. There was also wife inheritance in traditional Luo society. Once a woman’s husband died one of his brothers was to cater to all her needs and would take her in as a wife. This practice caused emotional distress to the mourning widow and also allowed for the spread of diseases such as HIV/AIDS. The traditional Luo marriage ceremony has its pros and cons. Like in every culture there are many important values to carry on and many practices that cannot be sustained in the 21st century. As individuals it is up to us to sift through the good in every culture and adapt it or throw away the irrelevant.

Marriage in Traditional African Society and It's Televance. (2016, Mar 11). Retrieved from https://studymoose.com/marriage-in-traditional-african-society-and-its-televance-essay 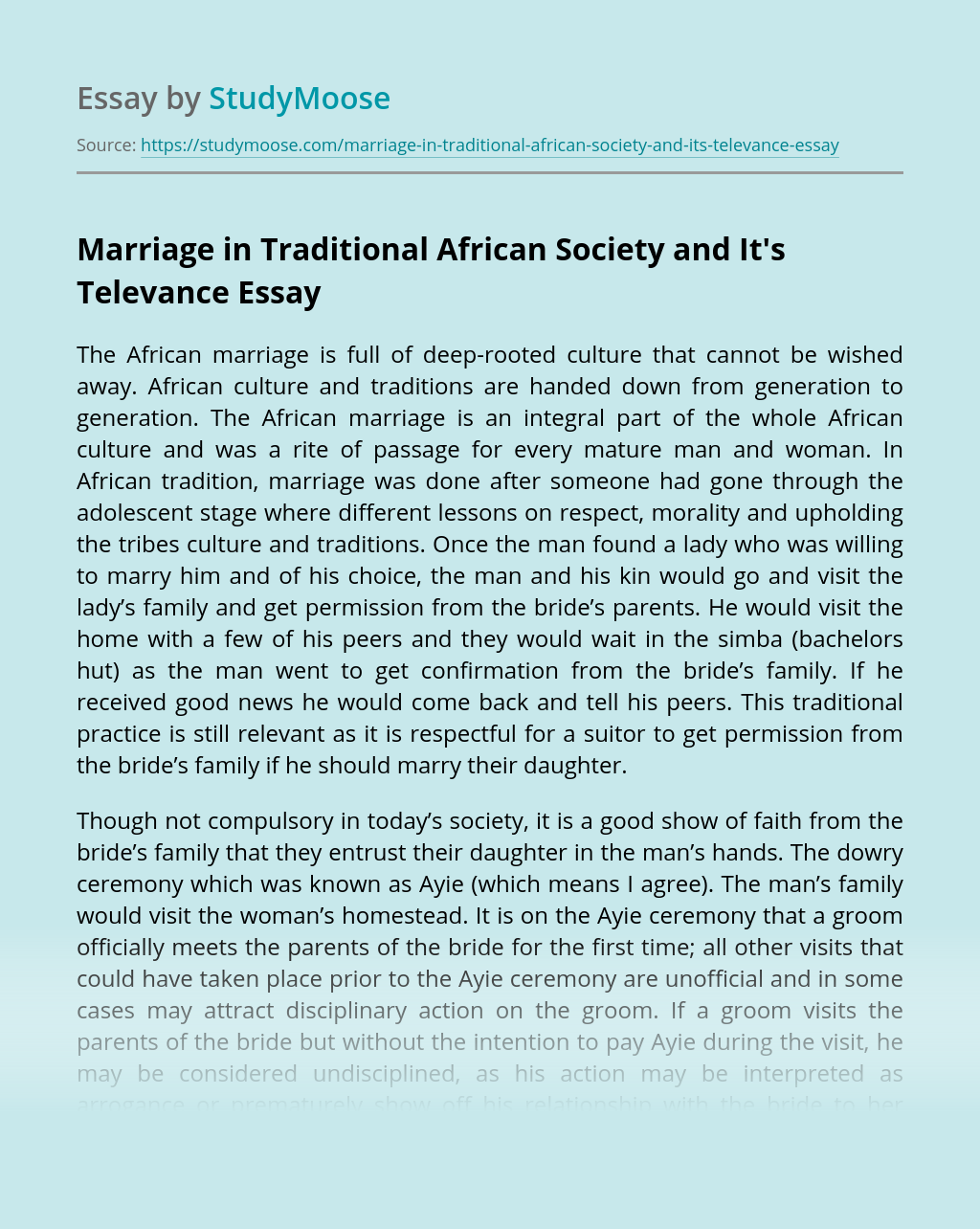 Turn in your highest-quality paper
Get a qualified writer to help you with
“ Marriage in Traditional African Society and It’s Televance ”
Get high-quality paper
Helping students since 2015
Stay Safe, Stay Original