Happy marriages begin when we marry the ones we love, and they blossom when we love the ones we marry” (Tom Mullen, 2005, p.1). It is argued that free-choice marriages based on love or romance, offer more independence and freedom as compared to arranged marriages where the man and woman are chosen by the parents and so there is pressure and is not so suitable and independent. However, no marriage is necessarily an ideal sort of marriage.

Don't use plagiarized sources. Get your custom essay on
“ Arranged Marriage vs. Free-choice Marriage ”
Get custom paper
NEW! smart matching with writer

Therefore, it becomes difficult to predict the ideal sort of marriage. The decision is upon the individual, whether he or she wants to be part of an arrange or free-choice marriage. There are two main types of marriages that are practiced in various societies and cultures and they are: arranged marriages and free-choice marriages. Both type of marriages have benefits and particular expectations for the man and woman. Research shows that the type of marriage chosen often reflects a person’s values, traditions, beliefs, and cultural customs.

Both arranged and free-choice marriages have similarities and differences.

In one scenario, the parents introduce their son or daughter to several potential mates, while giving two the final decision, given sometime” (2005). The relationship in an arranged marriage starts off from not knowing each other and or no feelings, and as time moves on, the love is built on together as the partners get to know each other more and spend more time together. The partners learn to love each other and in many cases the partners are more conservative and it takes longer for them to develop a bond. Unlike love or romantic marriages, arranged marriages have learned to love.

Therefore, these requirements should be acceptable from both the parents and the couple. For example, in some cases, women get the opportunity to work and some are usually forced to be stay-at-home moms. Also sometimes the two partners have to be the same nationality, have the same beliefs, belong in the same culture and etcetera. “The importance of good family background and compatibility as far as upbringing and family is concerned are vital for two individuals entering into a relationship” (Alochona, 2004, p.1).

However, most people believe that there is a low rate of divorce. If the two people do not know much about each other, it would be better for their marriage because they will find out new and interesting facts about each other during the time they spend together after marriage. As in free-choice, also called love or romance marriages, both partners know each other from before and do not have much left to find out or maybe in some cases, a number of new things can be found between couples. So, it is more likely to get bored of the marriage life if that is the case and it could lead up to divorce.

In different cultures around the world, this type of marriage is a type of an advantage for people who need money, therefore they will find someone who will be willing to marry the person because they cannot afford money to arrange the marriage function or give to their daughters as a dowry. Also, this type of marriage is chosen because of social status. A rich family will want their heir to marry into a family that is worth their status. And lastly, very religious and cultural son and daughters will just agree to an arranged marriage because of the way they have been brought up since childhood and they know that they will not have to worry about their parents of not approving or rejecting of their choice of spouse.

On the other side, a free-choice marriage can be based on romance or friendship. The relationship between this type of marriage can be based on admiration and with a person known really well from before. If the relationship has been brought together because of romance, it often seems for both of the partners that they are not able to live without each other. In this type of marriage, timing is important. It takes time for the two people to fully understand each other and make this big decision. Romance allows the two people to spend more time together and get to know each other better. This marriage is considered very sweet and romantic. Many people imagine themselves having this type of marriage one day. The idea of falling in love with someone is great because if the person is known from before, it makes it easier knowing that the rest of the upcoming marriage life will be spent with that person. Sometimes it also makes it easier when two people are in love, they are comfortable around each other and they have a certain understanding of what the other expects.

A free-choice marriage can also be based on friendship. If a person is very good friends with another person, it could lead up to romance. It is heard quite often that “Friendship is the first step towards love and the last step”. Knowing that a free-choice marriage has so many great feelings stored within it, it is being practiced all over the world. This type of marriage is not based on religious and cultural beliefs however it is based on feelings and emotions. Love just happens, no one can ignore it or even try to ignore it. If it cannot be ignored , it cannot be stopped. This leads to the two people thinking they are ready and have chosen their partner to move onto the next step, and that step is marriage.

However, before making such a big decision, most people think about their values, traditions, beliefs, and cultural customs because they know this will have a large amount of impact on their upcoming future. Even in this type of marriage certain circumstances have to be taken in consideration. Such examples include when two people are in love they are at their best to impress the other person, they wear their best clothes, they are at their best behaviour and project many things that they are actually not, and also it takes a while between couples to shed the veil after marriage when they are more open and comfortable towards each other.

When a person thinks about a free-choice marriage they think of love and freedom and automatically agree to it, to the great feelings stored within the marriage. A person would choose this type of marriage because they would not have to worry about not knowing the person from before. They know the person he or she is going to be with, have all the qualities they are looking for and have no doubt about it. Being comfortable with each other and when around each other is a big factor and in this relationship, this is all included.

In this type of marriage, there is no pressure of their family, friends, culture, and society because the marriage is based on freedom and own choice. There is no involvement of the parents and there is no worry about dowry and so on. Also, in this type of marriage the couples understand each other well and they decide this from over looking at all the factors that would need to be considered after marriage. Such examples include: children, work, homes, etcetera. In this generation, it does not matter what love is or what relationships are, most people just want to do what they want and what they think is right.

Whether it is an arranged marriage or a free-choice marriage, it takes two people who are very responsible, honest, and committed for the union to succeed. Arranged or free-choice, people seek perfect husband and wives but no one is hundred percent perfect. The success of marriage is in mutual understanding and acceptance, and also in mutual love and respect. Neither arranged marriages nor free-choice marriages are better than one another, it is up to the individual who is involved to decide which is best for them.”Getting married is a complete package. One does not marry the person as such but his or her habits, family, emotional problems, background, experiences, career, and many other things that are required to be dealt with” (p.1). “Success in marriage does not come merely through finding the right mate, but through being the right mate” (Barnett Brickner,2002, p.2). 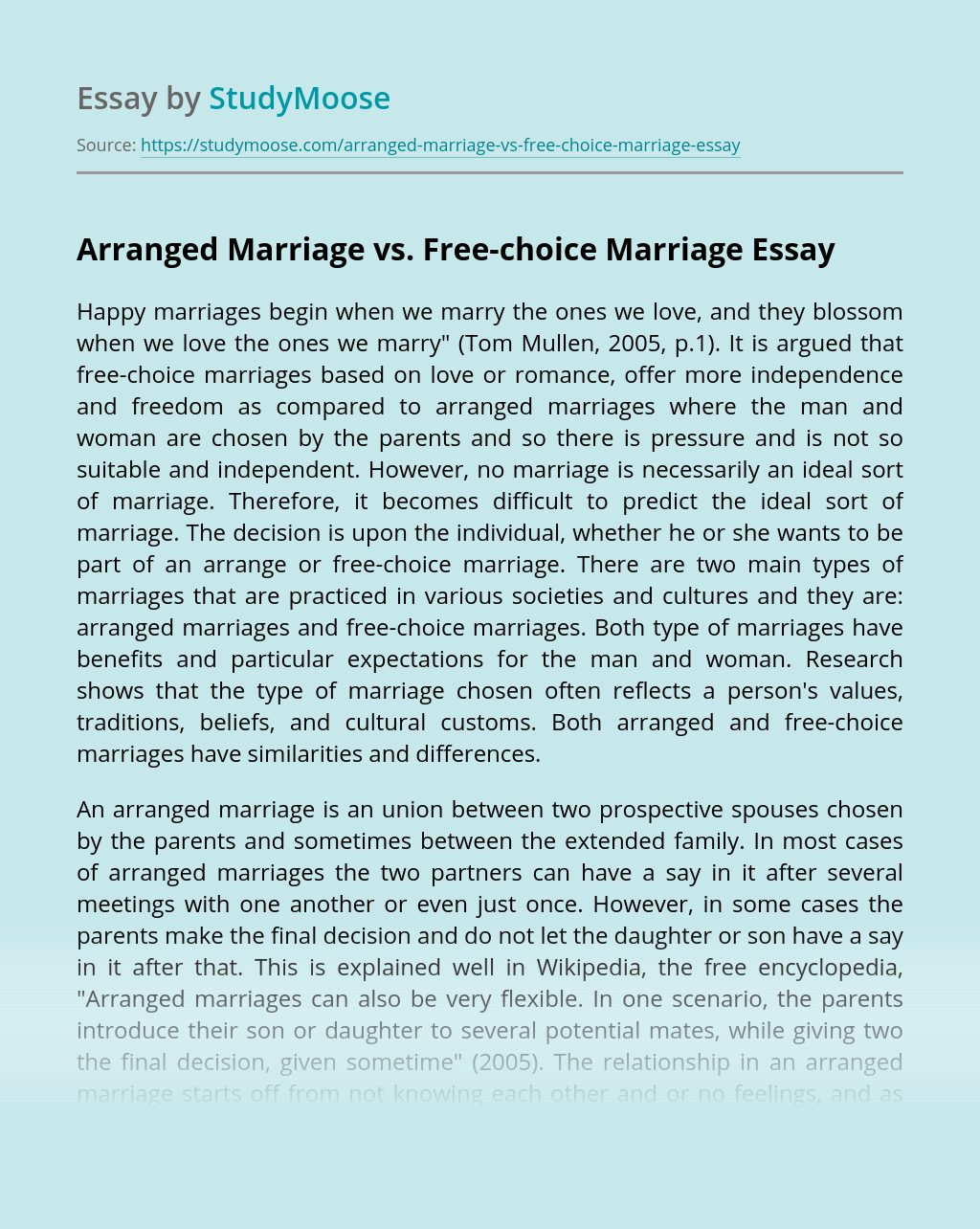