A report on Arranged Marriages

In a great part of Asia, marriages are still arranged by parents and family. Arrangements are frequently made simply on rational grounds. In countries such as different as Jordan and Cambodia, daughters are usually married to distant family.

Don't use plagiarized sources.
Get Your Custom Essay on A report on Arranged Marriages Just from $13,9/Page

Arranged Marriages are very controversial. Many people argue that choosing your life partner is a fundamental right, and others seem to say that mommy and daddy know best. The truth is that arranged marriages are completely legal and practiced in many cultures.

The fact of the matter is, arranged marriages are a cultural thing, and the law is very hesitant to get involved. Most commonly today, children can choose if they want to get an arranged marriage. If the child is lucky, the final vote will be theirs.

In Western countries, we lean on focusing our attention on more material issues such as sex, love, and beauty, which are the center of our relationships. People get married for such reasons, and then as a result, get bored of one another quite easily. In Eastern countries, they tend to look for more practicality in their mates. They look for aspects such as integrity, diligence, ambition, humility and generosity.

Arranged marriages can be successful, but either the man or woman may be displeased with the spouse that has been chosen for him/her. Sometimes, the man and woman get along, but at times there can be a lot of conflicting differences.

In the case of any marriage, certain qualities are required in order to sustain a healthy relationship. Patience, love, understanding, trust and kindness are a few of many helpful attributes that would help create a long lasting marriage. No matter what your reasons for marrying someone, you can make it a successful relationship by simply being courteous and respectful.

In some cases, arranged marriages can improve the social standing of a family. In other cases, women get the chance to get employment, but women are usually stay-at-home mothers.

There are certain rules that apply to arranged marriages. For one, you have to be the same nationality, so an East Indian would be pressured to marry one of his kind. In the Sikh culture and religion, the son or daughter have to marry the same caste, which means that the lower class would marry a low class person, and a high class would marry a high-class person.

Statistics provide evidence that arranged marriages are no less happy, and even more stable, than so-called love marriages. Through the ages, mothers have reassured their young daughters by the time they where married off that they don’t have to worry; love will come by itself. In some cases, people have grown to love each other, and other cases were not so fortunate.

Marriage can be a big decision in one’s life, whether you are getting married because of an arranged marriage or marrying for love. The basis on which marriage is created depends on an amount of factors, which include cultural, economic, and social aspects. Love, on the other hand, is the only factor needed for a love marriage. Two people might support their marriage on rushed, blinding love and find out that they aren’t in the least bit well matched. As Mamoon states, “Love, marriage and compatibility are not the same… Two people can be completely compatible yet have no love for each other and vice versa.” Although, love might be a beautiful basis for marriage, it is not necessarily the best way to go when choosing whom you want to live with and how you want to be provided for, for the rest of your life.

My personal opinion on marriage in general is that it’s all relative. If you feel comfortable that you can choose a suitable spouse, which you will be with for a lifetime, then that should be your personal choice to make. However, if you feel that your parents could decide better than you could, then there is definitely nothing wrong with getting an arranged marriage.

The most important thing is that you’re happy. It’s not the route you take getting there, but the destination. If you are married your dream mate, then why does it matter how you found them?

A report on Arranged Marriages. (2016, Jul 03). Retrieved from https://studymoose.com/a-report-on-arranged-marriages-essay 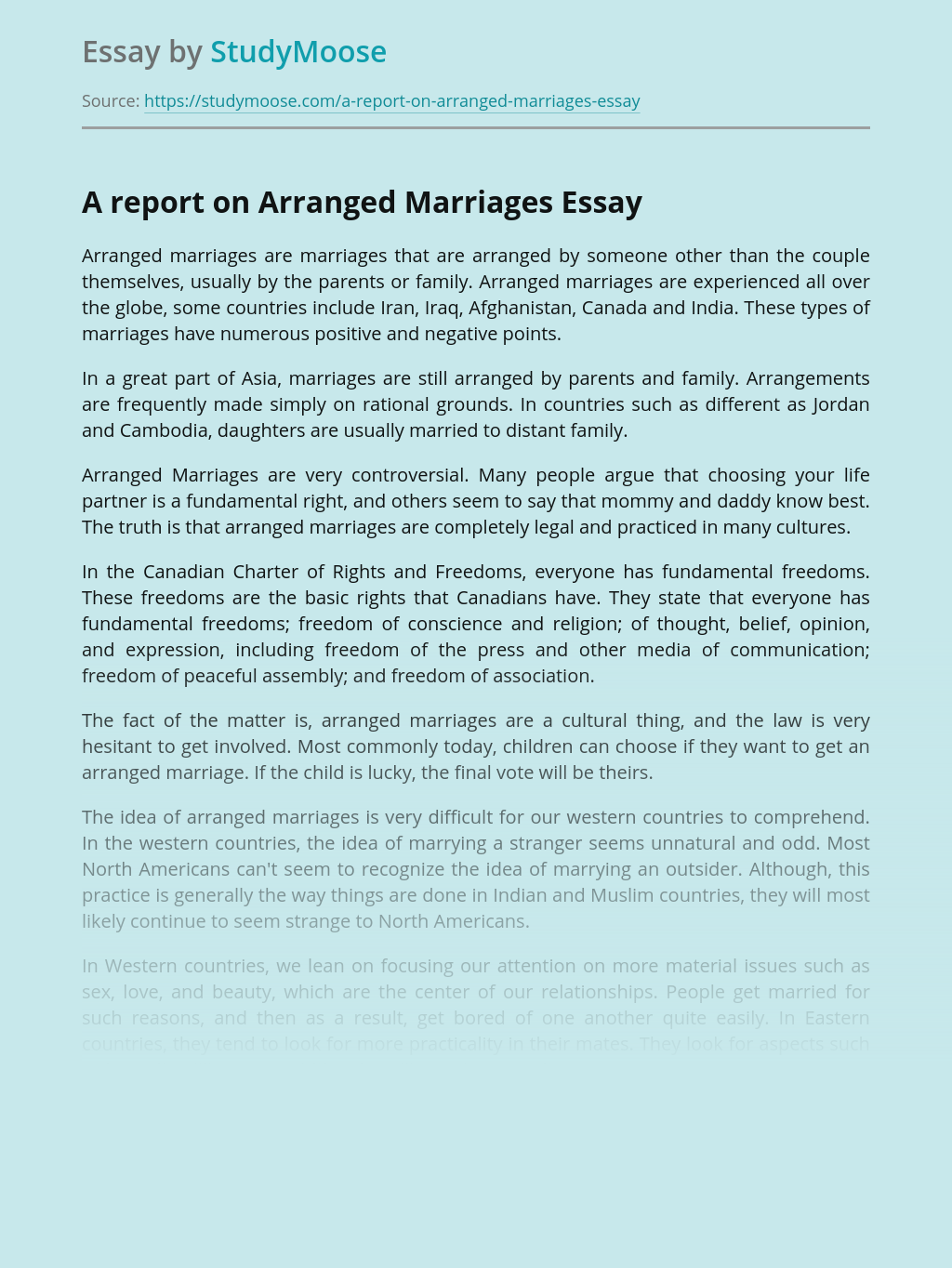 Infrastructure as the Foundation of Data Warehousing

Data warehouse is a system environment which provides strategic information and holds detailed or summarized data from heterogeneous sources and provides end users with data access solutions exclusively designed for reporting and business analysis. The overall structure of the data warehouse is basically described by its architectural and infrastructural components. Orr pointed out that “data...

“Only when the last of the animal’s horns, tusks, skin and bones are sold, will Mankind realize that money can never buy back our wildlife.” – Wild at Heart. Good morning to my teacher and fellow classmates. Poaching has traditionally been defined as the illegal hunting, killing, or capturing of wild animals.today my main focus...

You should use this file to complete your Assessment. •The first thing you need to do is save a copy of this document, either onto your computer or a disk •Then work through your Assessment, remembering to save your work regularly •When you’ve finished, print out a copy to keep for reference •Then, go to...

Definition of Racism rac*ism n (1936) 1 : a belief that race is the primary determinant of human traits and capacities and that racial differences produce an inherent superiority of a particular race 2 : racial prejudice or discrimination Webster’s Ninth New Collegiate Dictionary Segregation The separation of groups of people by custom or by...