What is ethnocentrism and cultural relativism?

Ethnocentrism is a person’s use of their own cultural “norms”, values and morals to judge another culture. We tend to view the way in which we think and act as correct; deviance from these internal “norms” is seen as wrong or abnormal. I think this tendency exists because our ingrained beliefs are often so strong that the guidelines created for us by our culture makes us see our way as the proper and natural way life should be (that is naturally how culture works).

Don't use plagiarized sources.
Get Your Custom Essay on What is ethnocentrism and cultural relativism? Just from $13,9/Page

I think that the avoidance of ethnocentrism is difficult, because it would seem that this method of thinking is quite natural. But, this line of thinking does a large disservice to the field of anthropology. When an anthropologist cannot be unbiased in their observations, it becomes harder to learn and understand different cultures. Ethnocentric viewpoints impair judgments and make finds less relevant. It is the place of the anthropologists to try to use cultural relativism when studying a foreign culture.

Cultural relativism would be the attempt of an anthropologist to look at a culture, understand it as much as possible and then only make judgments in accordance to the values, norms and morals of that particular culture. This point of view seems to make a lot of sense, in terms of gaining the best possible understanding of other cultures. There can, however, also be difficulties in certain cases when actually putting cultural relativism into practice. Aren’t there some exceptions to the notion of detached observation being moral? I believe there may be, especially in cases of unjust punishments or mistreatment.

I do believe that all people deserve to have at least basic human rights to safety and fair treatment–no matter what their culture commands. It is a reasonable stand point to not want to interfere with the systems of other cultures but, this is what I find to be the largest problem within the concept of cultural relativism. Direct interference maybe uncalled for, but making inhumane and unfair practices throughout the world known, could lead to indirect measures for improvement (without the involvement of the ethnographer) or perhaps a practice of selective or limited cultural relativism would be more ethical.

What is ethnocentrism and cultural relativism?. (2016, Jun 21). Retrieved from https://studymoose.com/what-is-ethnocentrism-and-cultural-relativism-essay 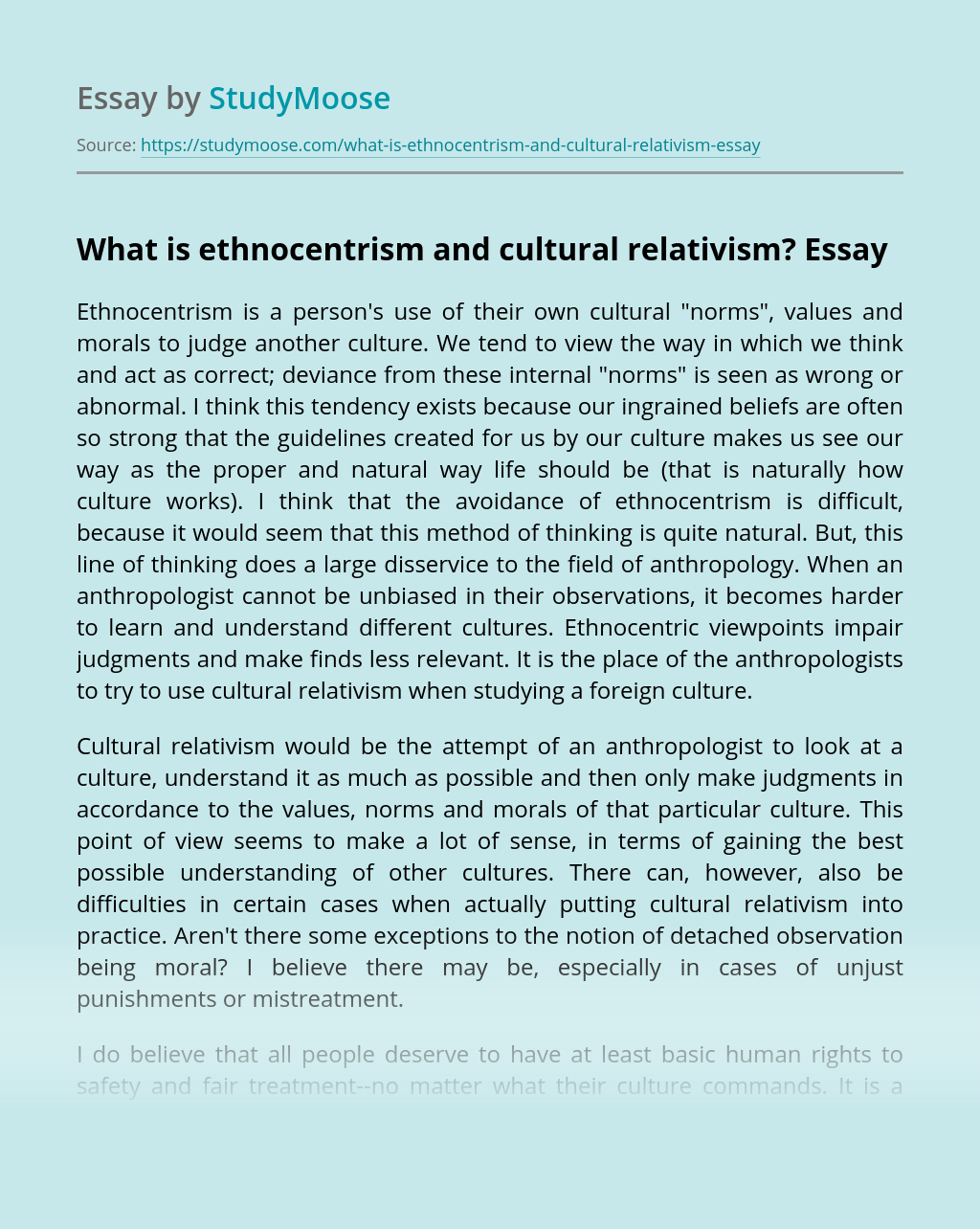 This essay will provide examples of inequalities and differences using information from City Road (The Open University, 2014) and the observations I have made which are similar on my street and how they affect society. Class, age, wealth, education, disability and even sexuality are seen as differences among those who lack access to these resources...

William Golding, author of Lord of the Flies, intends for the reader to view Jack as an animal because he wants to convey that civilization keeps humans from crossing the line from good to evil, but when there are no rules the savage side of people comes out. When Jack is hunting in the forest...

View sample
Get Essay
Why Respect Is Important

Target child Child observation details Date of observation: 28th December 2011 Time I saw good hand and eye co ordination when he was using his fine pincer grasp while he was drawing. He didn’t really have a preferred hand as he used both hands but mainly his right. He seemed to enjoy drawing which is...

Microsoft Word is a non-free commercial word processor designed by Microsoft. It was first released in 1983 under the name Multi-Tool Word for Xenix systems. Subsequent versions were later written for several other platforms including IBM PCs running DOS (1983), the Apple Macintosh (1984), the AT&T Unix PC (1985), Atari ST (1986), and Microsoft Windows...