Fish Out of Water

Every person has grown up adhering to specific set of standards, traditions and rules of conduct. People also conform to the underlying system and mandates of the society. These characteristics define the culture of the person; however, people do not follow a single culture with its set of laws and standards. Every person has its own cultural characteristics because each individual is reared in different societies with its own embedded culture and traditions.

The difference in culture is often referred to as cultural relativism which means that every culture is equal and no culture is superior to others.

Turn in your highest-quality paper
Get a qualified writer to help you with
“ Fish Out of Water ”
Get high-quality paper
NEW! AI matching with writers

Every culture has its own set of “systems of morality, law and politics” (“Cultural Relativism – Illogical Standard”). It is believed that every culture is valid and equal. Cultural relativism attempts to explain that the various aspects of culture such as religion, ethics, aesthetic and beliefs are subjective and largely depends on the individual within a particular cultural identity (“Cultural Relativism – Illogical Standard”).

Given that each individual has grown up within a defined set of culture, there will be a point in a person’s life that he or she will experience being somehow out of place when put in a different crowd with new set of people.

This may be called as a “fish out of water’ sensation. This means that a person feels uncomfortable with the surroundings and activities going on. We tend to experience this kind of feeling around people who are unknown to us, especially when hindered with a lot of communication and cultural barriers.

An example of a fish out of water experience is attending a wedding ceremony conducted in pattern of a different culture. I was once invited in a wedding of my colleague who married a person from another culture. Unfortunately, the groom is the only person I knew in the whole crowd. He married a Korean and they followed a Korean wedding ceremony. It was a very uncomfortable situation for me because the Korean culture is very different from western culture and tradition. The two countries are separated by hundreds of miles of land and ocean and located at both ends of the world.

Korean wedding is really a weird thing for me. First, Korean weddings mean joining of two families instead of two individuals, so most Korean weddings are composed of families of various generations. I was therefore intimidated to mingle with other people, especially to the members of the Korean families while my colleague is largely participating on the ceremony. Korea is a unified country and its people tend to look alike, think alike and act alike. There is strength in the people of Korea. Koreans may be residing in the United States and somehow follow some of the western trends.

But they have retained some of the important rites and tradition of their culture. Koreans are also individuals from the eastern hemisphere where people are not so liberal. People tend to be conservative and sensitive on some issues unlike westerners that are open-minded and can cope with every type of conversation. Some issues are still taboo to Koreans. Issues of gender and sexuality are only some of the issues that Koreans are quite sensitive with. Communication is also a barrier and makes me feel more of the “fish out of the water.

” Problems in communication and relating with others are some of the encountered problems in being out of place in an event or situation. Some people are having difficulty relating to others, especially those who belong to another culture. Cultural diversity is also characterized by difference in communication styles and attributes. The experience really tested my communication skills. First, I do not know anyone but the groom and he was busy on the ceremony. Starting a conversation is a little awkward for me because I do not want to offend people on something that I would say.

There are only a few white men who attended the wedding and interrupting their on-going conversation may be rude and awkward. Most of the attendees are Koreans which have a different communication style. Koreans are quite covert and have the tendency of not showing themselves to others. In short, they are not initiators of conversation and communication with other people. Their actions are also firm and delicate and they move with grace. Language differences may also be a problem. Some of them speak native Korean language that may hinder our understanding of one another.

It is quite hard to initiate a conversation with people from different cultural identity for the fear of misunderstanding and conflict. They also have their personal beliefs that they may be sensitive about. Intimidation is also a problem in starting interpersonal communication with other people. Fish out of water sensation is a feeling that a person may feel while dealing with events and situations where they feel different and deviant. However, overcoming this feeling is quite easy. First, you will never really get to know people when you do not approach them.

Communication is always the key, along with politeness and respect. Overcoming this particular feeling in events that may make you feel uncomfortable will provide a good opportunity to learn other cultures, traditions and practices that may be helpful for you in relating with people of the same cultural identity the next time you encounter them. It will also be a good opportunity to become knowledgeable in intercultural communication which is vital in today’s global society. Work Cited “Cultural Relativism – Illogical Standard. ” 2009. Cultural-Relativism. com. 26 March 2009 <http://www. cultural-relativism. com/>. 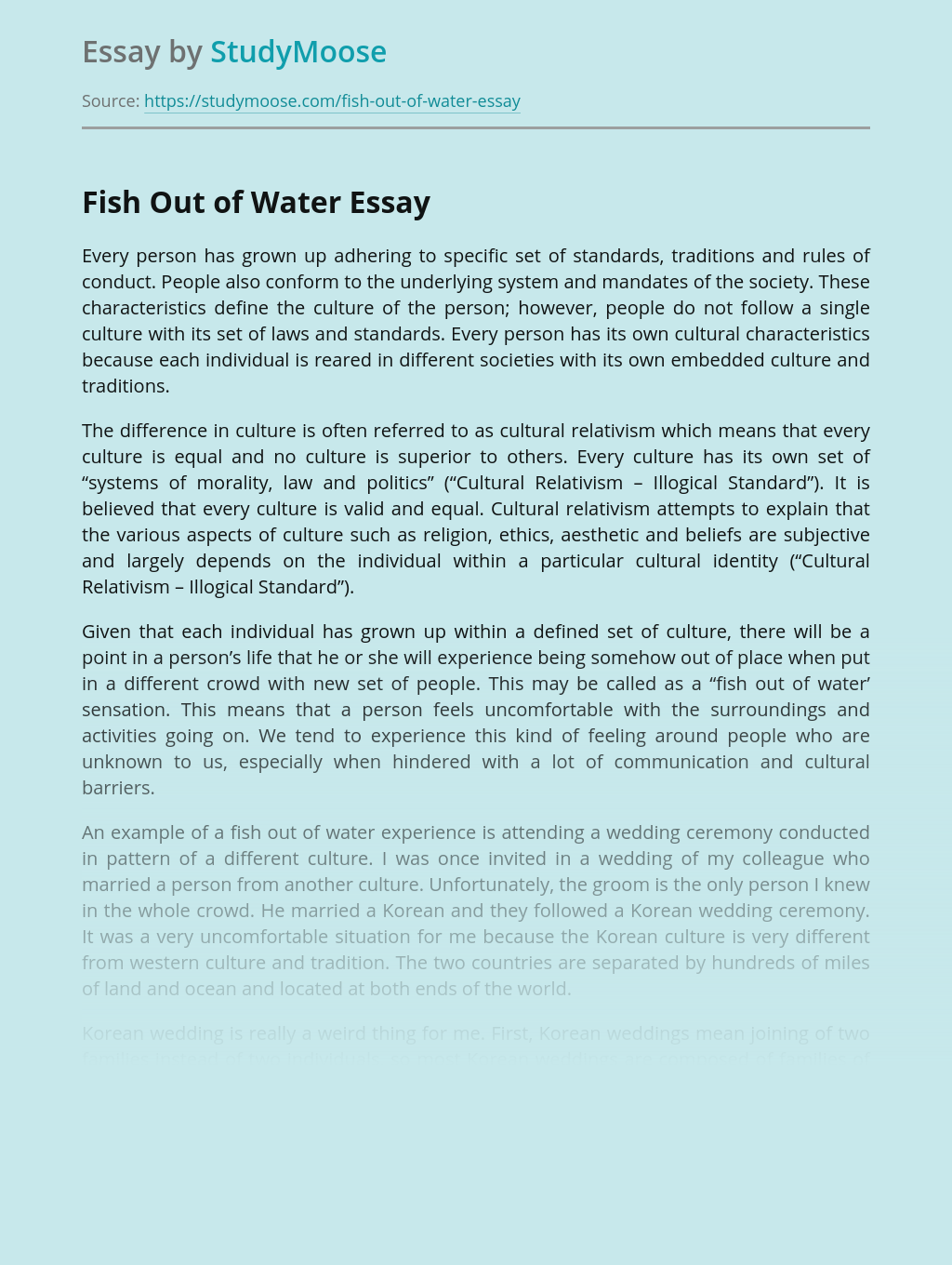 Turn in your highest-quality paper
Get a qualified writer to help you with
“ Fish Out of Water ”
Get high-quality paper
Helping students since 2015
Stay Safe, Stay Original