Response to "The Challenge of Cultural Relativism" By Rachels

Turn in your highest-quality paper
Get a qualified writer to help you with
“ Response to “The Challenge of Cultural Relativism” By Rachels ”
Get high-quality paper
NEW! AI matching with writers

In his text, Rachels argues that the idea of cultural relativism is an invalid argument, that it leads to implausible consequences, and that moral codes are not entirely different. At the same time, Rachels concludes that there are no good or bad things, but social norms; likewise, the cultural relativism influences us to have an open mind. Rachels begins by explaining that the cultural differences argument is invalid because the conclusion does not necessarily follow from the premises.

Here Rachels uses as argument the old belief that the earth was flat, which is wrong, to show that if you believe in something, it does not necessary has to be true. Furthermore, Rachels argues that some of the possible consequences of this theory are that we cannot criticize sadistic cultures. In this case, he uses the anti-Semitic example to claim that if cultural relativism establishes that it is wrong to criticize this kind of action because they are part of the cultural code, then the theory is incorrect.

At the same time, another of the serious consequences is that we cannot criticize our own culture, much less try to reform it since the theory states that it is wrong to make intracultural judgments. In other words, Rachels says that if cultural relativism is true, then what MLK Jr. did was wrong because his actions were against the moral code of his culture. Finally, Rachels discusses how the beliefs of one culture to another do not differ at all, since there are things that are essential in any society.

Response to "The Challenge of Cultural Relativism" By Rachels. (2016, May 16). Retrieved from http://studymoose.com/response-to-the-challenge-of-cultural-relativism-by-rachels-essay 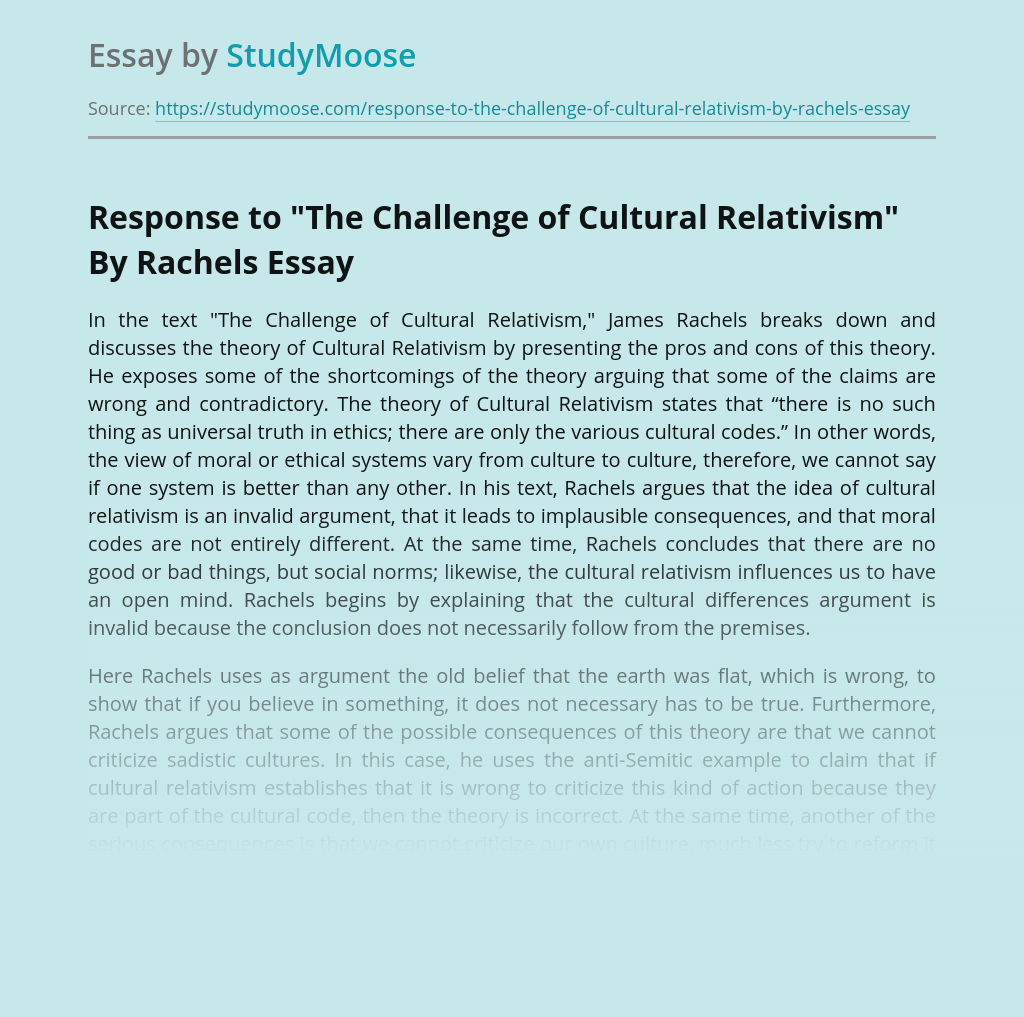 Turn in your highest-quality paper
Get a qualified writer to help you with
“ Response to “The Challenge of Cultural Relativism” By Rachels ”
Get high-quality paper
Helping students since 2015
Stay Safe, Stay Original