Ethical relativism is the theory that there are no universalized moral standards to apply to all people all the time. The relativity of ethics refers to the ethics may be different in different societies. The same situation and behavior may be morally acceptable in one society but morally unacceptable in another. However, this theory is rejected by most ethicists. First of all, some claim that while the moral practices of societies may differ, the fundamental moral principles do not.

Different nations, even the same nation in different times, often pursue different or even inverse ethics.

Don't use plagiarized sources. Get your custom essay on
“ Concept of ethical relativism ”
Get custom paper
NEW! smart matching with writer

However, the differences can only explain that moral has diversity but cannot deny that moral is universal and general. There is no doubt that ethics such as fairness, honest and self-esteem are applicable and essential to all societies at any time which is ignored by ethical relativism. Furthermore, ethical relativism promotes social inner conformity and causes no room for moral reform or improvement in a society.

In addition, members of the same society may hold different views on practices. When the whole society lack of common agreement on certain issues, it’s really hard to declare which is the right behavior. When cross-cultural communication, ethical relativism may provide support for individualism and cause a situation that different social groups only focus on themselves so that go against the agreement with each other. History development is introduced Ethical relativism encompasses views and arguments that people in various cultures have held over several thousand years.

For example, the ancient Jaina Anekantavada principle of Mahavira (c.

599 – 527 BC) states that truth and reality are perceived differently from diverse points of view, and that no single point of view is the complete truth; and the Greek philosopher Protagoras (c. 481 – 420 BC) famously asserted that “man is the measure of all things”. The Greek historian Herodotus (c. 484 – 420 BC) observed that each society regards its own belief system and way of doing things as better than all others. Various other ancient philosophers also questioned the idea of an objective standard of morality.

In the early modern era Baruch Spinoza (1632–1677) notably held that nothing is inherently good or evil. The 18th-century Enlightenment philosopher David Hume (1711–1776) serves in several important respects as the father both of modern emotivism and of moral relativism, though Hume himself did not espouse relativism. He distinguished between matters of fact and matters of value, and suggested that moral judgments consist of the latter, for they do not deal with verifiable facts obtained in the world, but only with our sentiments and passions.

But Hume regarded some of our sentiments as universal. He famously denied that morality has any objective standard, and suggested that the universe remains indifferent to our preferences and our troubles. The levels and types of western ethical relativism. Ethical relativism is an important inclination of thinking. It has many levels and types. Its causes are also very complicated. The experience lesson of western, ethical relativism in theoretical thinking may promote our research of ethics; it has both negative significance and positive significance in practice.

Its message is moral beliefs because of cultural different and different, the thesis is descriptive, namely to anthropology that special case study for the foundation. 2, the standard ethical relativism regulating the relativism also think that only a moral standard by group or individual when accept is only effective; The effectiveness of the standard limited to certain scope, and moral code itself also limit in a particular area, as most etiquette principles and customs limited to specific areas.

The perverted moral values On the other hand, the moral, as dependent on and decided to part of the cultural organism, which will moral points, thought moral as materials is substantive, no existence people from the common features, human relationship, and people in the moral existence, validity and value shows the subjectivity of the out side.

Moral value of the lost

Ethical relativism moral existence and value will be to strengthen the relativity of extreme, and creativity are intentionally or unintentionally covered, forgotten and cancelled, this actually means that people is the starting point of the moral value purpose and end-result forgotten and cancel, 3? Moral principles using the dislocation First, the moral are reality wrong. Second, ignore the moral convergence. Third, application strategies are machinery. The Limitations and Enlightenment about Ethical relativism

The limitations of the practical level: Ethical relativism can lead to the moral crisis in society practice of moral life. Different people, different regions, different countries, different culture and different social form have different moral each other.

When these various different levels of social group interact with each other, they are unavoidable produce conflict. But it is undeniable that ethical relativism provides us with much beneficial enlightenment: Ethical relativism contributes to cultivate moral freedom of the individuals and groups. It can make us take an open, flexible attitude and contributes to people of the different ethnic groups, cultures and social systems are forming the atmosphere of mutual respect, mutual understanding and mutual tolerance.

Socrates “Virtue is knowledge” proposition more knowledge as a moral standard, the nature and source of Socrates, knowledge is not derived from practical experience, but from human reason, rational but the unique subjective cognitive ability, therefore, Socrates’ ethical thinking its deep implication is undoubtedly fragmented subjectivity and objectivity of morality. Skeptics of ancient Greece in the philosophical level, the objective existence of things and its nature in doubt, from the theoretical logic of prefabricated or pre-ethical thinking relativism, subjectivism direction of development.

Modern Rationalism philosophy advocates the universality and inevitability of knowledge does not come from external experience, but from the inherent rationality; Accordingly, the scope of the ethics, rational camp philosophers and ethicists advocates ethical guidelines and the moral principle of universality, necessity, and moral truth of the theory can not be obtained from the experience of moral life, but only from the rational, moral, rational or practical reason.

As Rationalism prominent representatives of Immanuel Kant, deontological ethics reflect the significant nature of absolutism, but his ethics and provides us with a real practical guide for the contents of his ethics should be said that formalism, empty, empty form that contains the possibility of changing to keep the subjectivism and relativism.

In short, Modern Empiricism and Rationalism ethicists whether morality comes down to experience, emotion or reason, these are all subjective things of the spirit of their original purpose of trying to construct a new social objective, universal moral system, the result is returned to the person’s subjective mental world; actually hope to establish the objectivity of the efforts by the subjectivity, not only fail to achieve their goals, but its subjectivity digestion objectivity.

Different social form or cultural system have the requirement of different moral inevitably, and ethical is relative to the social or cultural system. Culture ethical relativism mostly connected with the study of anthropology or compared culture. Anthropologists are usually very suspect the possibility of founding common moral principle, because they have seen mostly the great differences of moral life practice of different nationalities, different regions and different social.

Culture ethical relativism advocates “customs control everything”, “moral vision changed with the geography “. Different cultures have their own standard about right or wrong and good and evil, so they cannot use a culture standard of right or wrong, good and evil to measure the behavior of people in another culture life, and can’t stand in the standpoint out of a culture (other cultural standpoint) to judge a culture. All social formation which belongs to different culture often has very different things which they agree or oppose in the moral.

But in an internal social, most of the people in the social have the moral conscience— common of moral, which is the general knowledge about right and wrong in moral. In a broad sense, culture ethical relativism think the entire moral standard is just the reflection of social habits or social customs; it is means that the moral behavior is just the behavior which is recognized by habits in a specific cultural system. ?? Ethic relativism comes from cultural differentiation and also protect the existence of different culture.

For example, as to the popular topic of Western hegemonism. Since modern times, western society first come into capitalist market economy. The development of the market economy will be addressing different country and each nation into the process of integration of world economy. Along with the economic integration, the western countries in a dominant and control status in the aspect of world culture, to other country or nation of culture . Even the western country make penetration of the cultural or conduct hegemonism to other culture or nation. 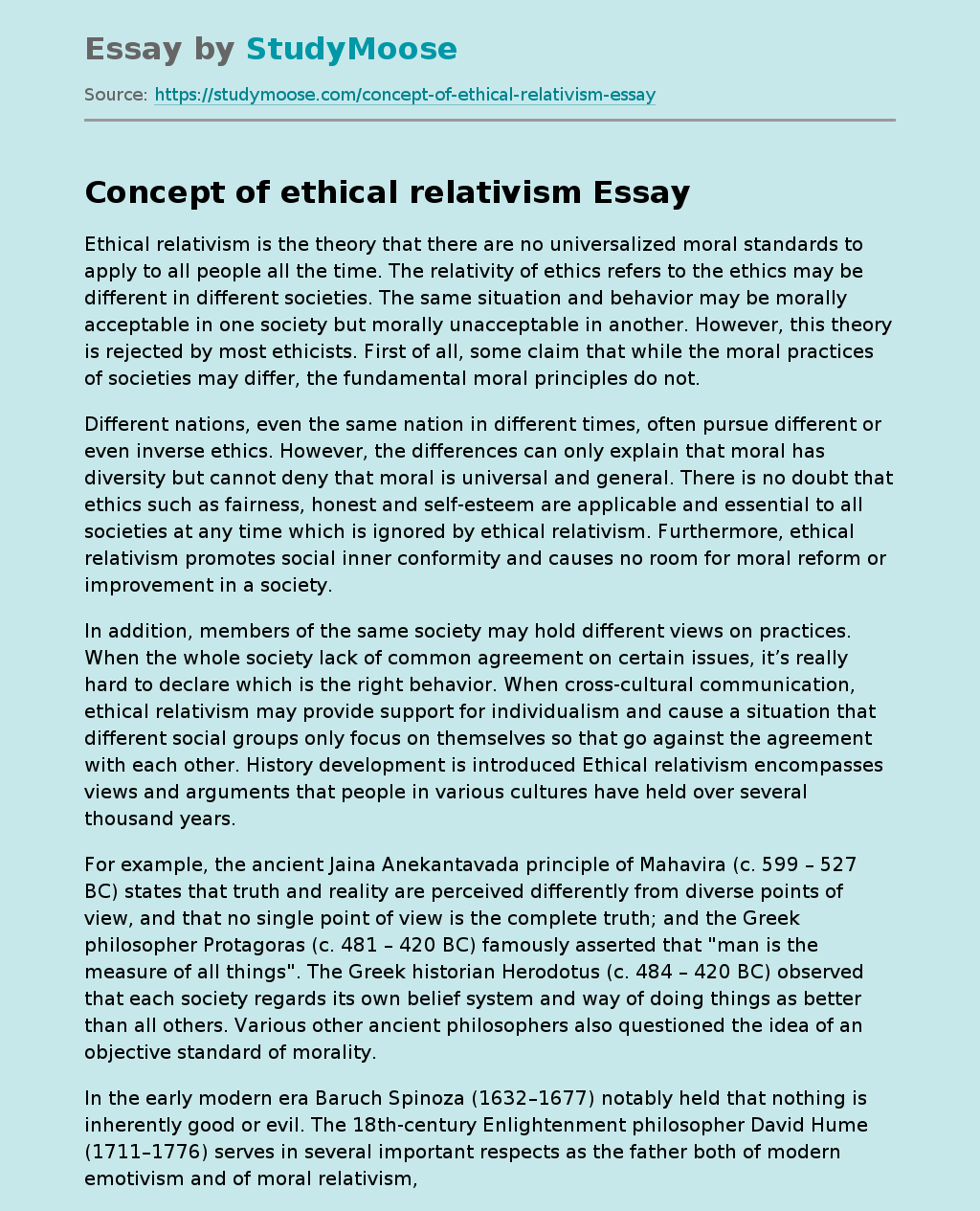