Of Mice And Men Pee On Crooks

P: Crooks is the one on the ranch who is by himself and is unable to mix in with the others at all because of his colour.

E: This is proven through the phrase , Crooks, on a black man’s loneliness: “S’pose you didn’t have nobody. S’pose you couldn’t go into the bunk house and play rummy ’cause you was black. How’d you like that? S’pose you had to sit out here an’ read books.

Don't use plagiarized sources.
Get Your Custom Essay on Of Mice And Men Pee On Crooks Just from $13,9/Page

A: Through the repetition of the conjunction “s’pose,” a lexical field of isolation is created which further emphasises the sheer hardship he faces being the only black man, which simultaneously provokes the reader to feel empathetic towards him. Another reason that the reader will feel empathetic towards Crooks at this point is because of the fact that he his openly confiding in Lennie which gives the impression that he isn’t able to do this on a normal basis.

P: Crooks is aware that not only is his weakness his crooked spine but also his colour.

E: “This is just a nigger talkin’, an’ a busted-back nigger. So it don’t mean nothing, see?”

A: The use of alliteration with “busted-back” suggests how Crooks is emphasizing the fact that he is not only black but is also significantly weak compared to the others because of his back. Through this the double marginalism Crooks faces is emphasised

which creates sympathy towards him. This further gives the impression that he is almost purposely trying to devalue himself which implies how he is vulnerable and is almost trying to use this as a privilege as the weak are not listened to and taken account of.

P: Even though Crooks is the only Negro at the ranch, Steinbeck displays him as an extremely independent worker.

E: This is evident from, “This room was swept and fairly neat, for Crooks was a proud aloof man. He kept his distance and demanded that others kept theirs.

A: From the description of his room which Crooks insists on keeping neat implies that fact that even though he has been degraded to the levels of animals because of his colour, he has come to the realisation that he does not need to live like one. This displays that dignity is an important matter to him. Also the use of the verb “demanded” suggests that Crooks is determined to have a say in which he talks to if that’s the only thing he can do. This emphasises the fact that he purposely isolates himself, as he is a victim of prejudice.

E: For example, “his eyes….. because of their depth seemed to glitter with intensity… he had pain-tightened lips…” implies this.

A: The use of the metaphor, “glitter with intensity” implies that Crooks has many hidden emotions yet he is unable to share them with anyone, as he is not close to anyone due to his colour. Also the use of the pre-modifier, “pain tightened lips” suggests that Crooks has almost represses his emotions and painful experiences away inside him, as he is unable to find someone to confide in.

P: Many other people use his colour as an excuse to overpower him.

E: For example Curley’s wife says, “I can have you canned for this,”

A: The fact that Crooks immediately pipes down tells us that even Curley’s wife can use her status as a white woman to get her own way despite it her in the wrong of being in Crooks room. This displays the predatory nature of human existence displayed through all the character on the ranch.

P: Crooks lack of dominance in the ranch life is clearly evident through his description and personality.

A: As he ‘opened quietly’, can be symbolic of his natural quiet life, which shows that he is in an isolated world with no dreams. The explicit commentary of crooks ‘head’ being black as shown by the word ‘negro’, expresses that being a black person means that you are powerless and segregated in the ranch life. ‘Eye patient’, confirms to the audience that Crooks is awaiting for recognition, and as he is ‘lean’, could possibly mean that he is looking up at the ranch workers as he has no authority over them.

P: Crooks craves for some human contact vastly through uttering his feelings.

E: ‘a guy goes nuts if he ain’t got nobody…books ain’t no good…guy gets too lonely an’ sick’

A: Use of hyperbole, ‘nuts’ stresses Crooks abhorrence of his seclusion and that being socially excluded has made him change negatively, by being ‘sick’. The adverbial quantifier intensifier points out that his need for social interaction is literally killing him. Through the use of the words, ‘nuts…lonely…sick’, creates a semantic field of dehumanisation, as Crooks has no typical lifestyle or feelings in association to the other workers in the ranch. A lexical field of knowledge is made due to the repetition of ‘books’, showing that ‘books’ is his only source of entertainment to fulfil his need to mingle with others in society.

P: Crooks despondent state makes him urge to take advantage of the weakest in the ranch, Lennie.

A: Crooks, plays with Lennie’s mind, to torment him, which was deliberately done to make Crook feel better as he doesn’t feel remorseful for himself no more (schadenfreude).

He treats Lennie in this manner, by eradicating the thought of George returning which is significant to Lennie, as they are fraternal bonds.

P: Crooks poor physical and emotional injuries are displayed when he is described.

A: Here a semantic field of agony is evident through the words ‘pain… tightened…pain’, which suggests that Crooks ranch life underprivileged and too challenging for someone of his figure. The use of pre-modifier ‘pain-tightened’, illustrates the depth of ache within crook, which makes him unable to speak up for himself, due to having no greater dominance in contrast to other ranch workers including Curley’s wife.

Of Mice And Men Pee On Crooks. (2016, Aug 09). Retrieved from https://studymoose.com/of-mice-and-men-pee-on-crooks-essay 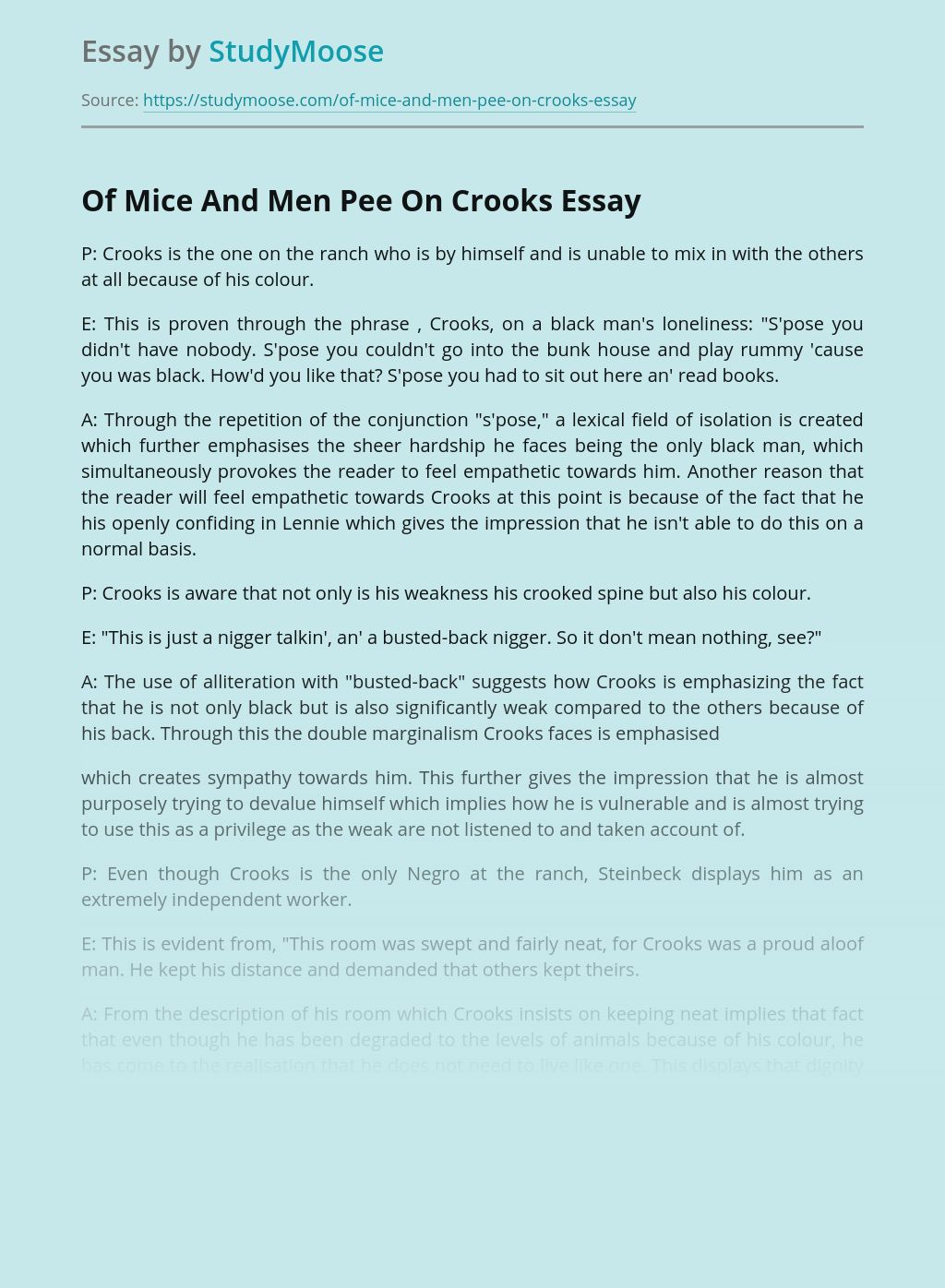 Rate this post The Disney princess movies are American classics. Like them or hate them, fairytales are common knowledge in America. Why is it so important that Disney drills viewer’s heads with these fairytales, specifically young girls? While all of the Disney princesses offer viwers obvious good morals and life lessons, there are underlying messages...

How to Recognise Signs of Abuse

Rate this post Identify the signs and symptoms associated with each type of abuse. Physical abuse Non-accidental use of force that results in bodily injury and pain this includes being slapped, cut, punched, kicked or improperly physically restrained. Signs of this could be bruises, scratches, cut marks or burns. Sexual abuse Sexual abuse, also referred...

Rate this post Adolescence, the period after middle childhood, is a very crucial time in the life of an individual. Adolescence (age eleven through nineteen or twenty) is the time between childhood and adulthood and is accompanied by major physical, cognitive, and psychosocial changes. For this observation, I will be observing my roommate, Amore, who...

KFC and Its History of Success

Rate this post Colonel Harland Sanders, born September 9, 1890, actively began franchising his chicken business at the age of 65. Now, the KFC® business he started has grown to be one of the largest quick service food service systems in the world. And Colonel Sanders, a quick service restaurant pioneer, has become a symbol...

Rate this post Introduction Many families decide to run a family business, they often combine their passions, skills to success and want to pass it to the next generation. The family business brings a lot of benefits as well as drawbacks, however, is it worth to start up a family business but what does the...