Browning's Story in A Poem The Laboratory

Robert Browning’s poem “The Laboratory” is set in France before the French Revolution. The dramatic monologue is about the narrator herself and her plotting of revenge against her previous lover and his current mistress and it tells the reader how she plans on doing so. She believes her actions in the story are justified and reasonable.

In the poem, the story’s tone is established with the setting, which also helps create vivid imagery for the readers, making it easier to put into context and understand.

Don't use plagiarized sources. Get your custom essay on
“ Browning’s Story in A Poem The Laboratory ”
Get custom paper
NEW! smart matching with writer

Browning uses the title to set the scene for the story, as “The Laboratory” is a place where scientific experiments take place. But oddly, in the poem it’s a place the narrator uses to tell her feelings and plot revenge. The poem is set around the time before the French revolution, which is indicated from the subtitle, “ancient regime” which was at a time of internal conflicts and civil wars, showing that it was at a violent time, which could be linked to why the narrator took such drastic measures.

Furthermore, perhaps she felt more confident in committing such a crime because a single murder would be insignificant and probably “brushed under the carpet” in the context of the war period.

The poem is situated mainly around the place in which the apothecary is working, where he is making the poison that will be used to kill the narrator’s adversary. The narrator is close by the apothecary, whilst he is making the poison as she watches it, “curling whitely”, showing she wants to be involved in the preparations and see it come together.

This reveals a more menacing aspect behind her character.

The rhyme scheme is regular, with an ABAC structure that makes each short stanza playful until the dramatic break in the last line. The voice of the narrator is delightfully captured, and we see that this woman is revitalised by more than just revenge; she is invigorated by the power that murder allows her to have. This is significant, as she may not have had very much power being a woman in those times. However, because she is able to purchase such an ominous potion, we may consider that she is actually an upper-class lady.

There are differing theories on the narrator’s social status. When she first mentions her untruthful beloved, she only mentions one woman, but a few stanzas later; she mentions both “Pauline” and “Elise” as targets. She is already being taken away with the potential to kill. While the rhyme scheme is regular, the enjambments stress that she is willing to lose a bit of control, letting this desire take over her.

Additionally, if winning her husband or lover back were the only goal, she would perhaps not take so much joy in the prospect of causing painful death to the ladies and ethical torment to him. Her intense focus on the ingredients further confirms the elation she feels at suddenly giving herself over to this malice. That this scheme will cost the narrator her “whole fortune” only validates the choice. We get the sense that she will be forever defined by this act. In closing with “next moment I dance at the King’s,” the poem implies her intent to carry herself as a woman who has accomplished a great deed. Alternately, we can interpret her as being a prostitute and fearing public humiliation.

Psychologically, her resentment could be motivated by class expectations. She considers herself a “minion,” which might be interpreted as a lady-in-waiting or some low-level servant, whereas her competitors are not as low in the social ladder. That her beloved is involved with them and that both expect that the speaker is grieving away in an “empty church” is the worst offence. She is considered less worthy than them, which only strengthens her resolve to demonstrate her superiority through the murder.

One could argue that the speaker has never actually been involved with her beloved, since she gives no direct proof of a relationship. Further, as her lover and competitors all know that she is aware of the affair, it is possible that they do not even know they are offending her in any way. There is also, in the “empty church” line, the slightest indication that perhaps she was seeking guidance from God and she was commanded to murder her; similar to the story of Abraham in the Bible when God commands him to kill his son. Much can be drawn from Browning’s masterful subtly.

Finally, sexuality is presented in this poem as something capable of great horror. In the same way that the bright, pretty poison will ultimately cause painful death, so does the allure of sexuality have a dark side. Sexuality is certainly behind whatever actions have led this woman to the apothecary, but it is important to keep in mind her willingness to use it on the apothecary in the final stanza, when she tells him, “You may kiss me, old man, on my mouth if you will!” Perhaps this poem should not be taken as a moral message but rather read it as his uses of values, which also surround their opposite. What drives men and women to celebrate life, or start it, can also cause that life to end.

Browning's Story in A Poem The Laboratory. (2016, Jun 13). Retrieved from https://studymoose.com/brownings-story-in-a-poem-the-laboratory-essay 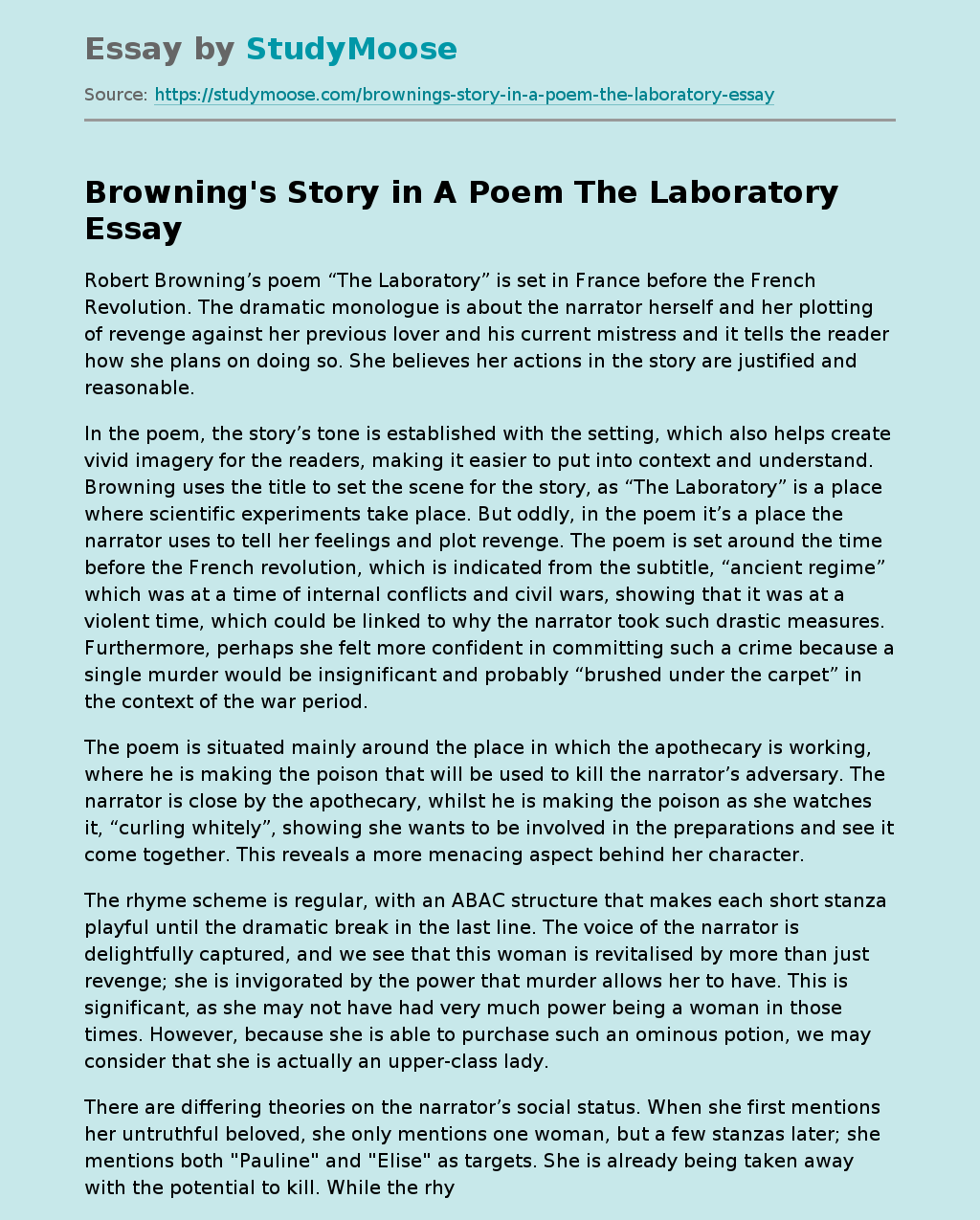