Porphyria's Lover by Robert Browning as a Dramatic Monologue

The Dramatic Monologue was a popular form of poetry in Robert Browning’s time. It is a form of writing in which the speaker in the poem is a dramatized imaginary character. The monologue is cast in the form of a speech addressed to a silent listener. Its aim is character study or psycho-analysi. In a dramatic monologue, the person who speaks is made to reveal himself and the motives that impelled him at some crisis in life or throughout its course.

Don't use plagiarized sources. Get your custom essay on
“ Porphyria’s Lover by Robert Browning as a Dramatic Monologue ”
Get custom paper
NEW! smart matching with writer

The character is developed throughout the conflict between his thoughts and emotions and not through any description on the part of the poet.

He may speak in self-justification or in a mood of detached self explanation, contented, impertinent or remorseful. What the poet is intent on showing us is the inner man. It is a monologue because it’s a conversation of a single individual with himself. About the poem: Robert Browning is one of the most eminent poets of the Victorian Age.

In the early years of his career, he worked on plays but finding no success, heturned to poetry. His early career in plays helped him to excel in composing dramatic monologues. Beowning’s genius was essentially dramatic.

His dramatic bent of mind is seen in his characterization and is the unfolding of dramatic situation. Porphyria’s Lover is presented in the form of a Dramatic Monologue in which the speaker is a lover who has an abnormal, if not insane mind telling the story of how he killed his own mistress.

The lover does not speak to anyone in particular. It was a conversation with himself. He has just committed a murder but sits coolly waiting for divine intervention. Through this narrative Browning reveals the subtle analysis of an individual’s soul.

Like most of Browning’s dramatic monologues that deals with such psychopathic characters, the poem depicts a situation just after the moment of action it describes has passed. When he presents the scene Porphyria is already dead. The question that naturally arises is why the lover murders the woman. There is no indignation or provocation of any kind. On the contrary as the lover himself admitted Porphyria worshipped him. The most obvious reason for the murder is that, the lover is insane. But this does not offer a wholly convincing explanation. The manner in which the over has narrated the story shows no disorder in his mind.

It is possible to argue that, the lover’s own passion reached such a feverish pitch and it is mingled with a state of ecstasy that he unwittingly went on to strangle the woman. But then, there is not the least feeling of regret or remorse afterwards. If the murder had been committed in a state of passion and ecstasy, there would have been a most painful kind of remorse in his heart afterwards. Whatever the motive of the murder, the poem is a gripping narrative. It cannot be denied that the poem has an appeal of its own, perhaps as a study in abnormal psychology.

Browning was always pre-occupied with the psychology of man, and this had moral implications for him. In pursuing his study of the human mind, he developed an independence of style and tried to attain the appearance of realism through a medium that was dramatic. His dramatic monologues were written to project a certain kind of human personality, a certain temperament, a way of looking at life or even a moment of history realized in the self-revelation of a type. He developed a remarkable ability to explore character argumentatively which provided his poems with a distinct note of individuality.

His real interest was not in the externals of characters but in the mental process of his characters. His purpose was ‘soul dissection’ or probing in the incidence in the development of a soul. For this purpose, he used and perfected the dramatic monologue as a poetic form best for depicting the soul and psyche of his characters. It is a drama of the soul. The poem can also be seen as an exploration of the issues of morality and sexual transgression. Browning responds to the conflict between morality and aesthetics- an issue which dominated the Victorian society.

Porphyria's Lover by Robert Browning as a Dramatic Monologue. (2016, Sep 28). Retrieved from https://studymoose.com/porphyrias-lover-by-robert-browning-as-a-dramatic-monologue-essay 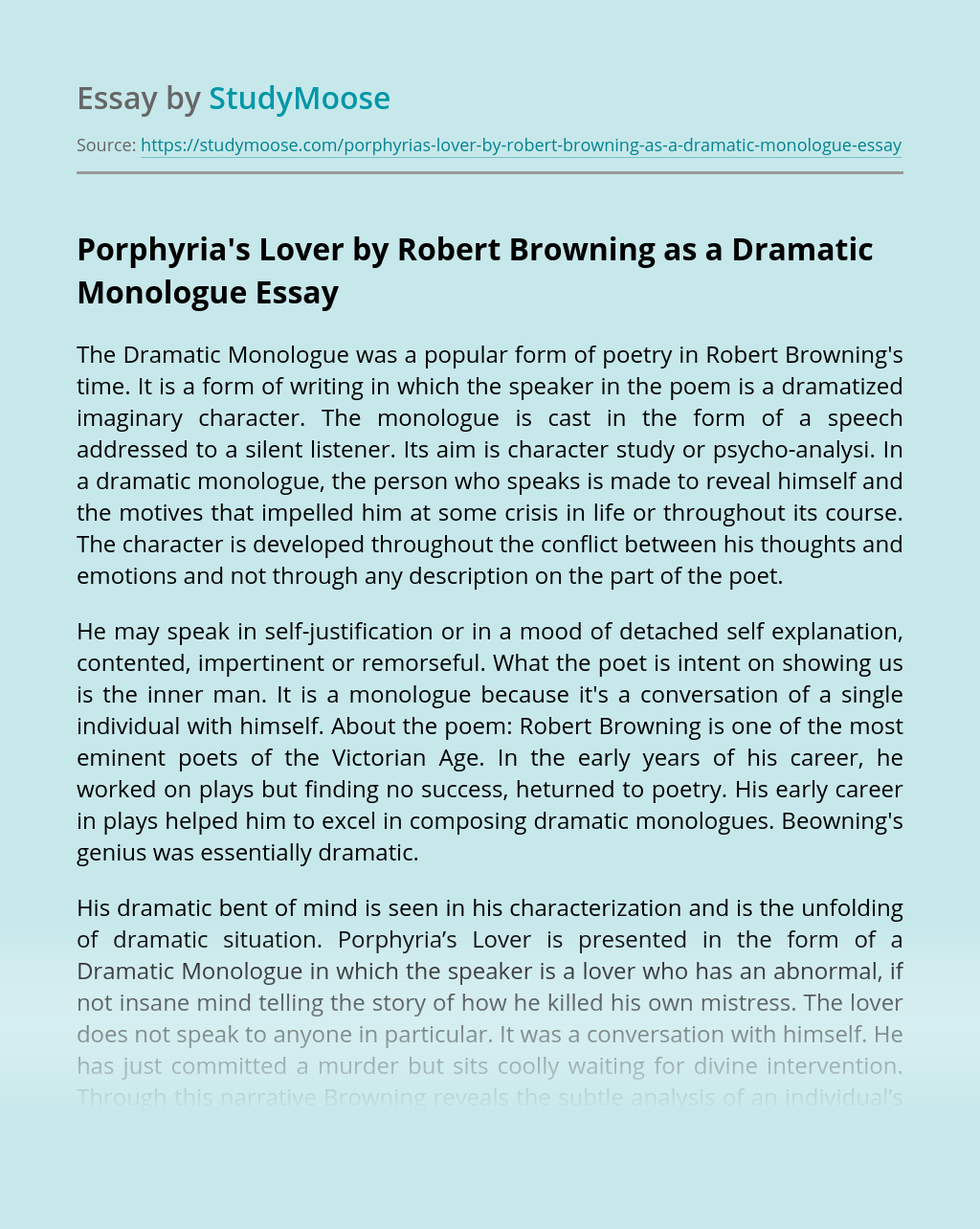