The poems Nothing Gold Can Stay and Dust of Snow both by Robert Frost show the relationship between Mother Nature and human nature. Although the poems share the same theme, they have similar perspective, form, and diction, the poems have different styles. Both the poems show some degree of truth in human nature through Mother Nature, but when comparing and contrasting them, there are many more connections that are exposed.

In Nothing Gold Can Stay Frost shows the loss of innocence between two figures, Eden and gold.

Don't use plagiarized sources. Get your custom essay on
“ “Nothing Gold Can Stay” and “Dust of Snow” both by Robert Frost ”
Get custom paper
NEW! smart matching with writer

The poems first line, Nature’s first green is gold explains that gold represents innocence. Frost then writes, Her early leaf’s a flower/But only so an hour.

Frost shows that innocence does not last forever and will soon fade. The poem follows saying that Eden goes into grief symbolizing the loss of innocence. When applying this theme to human nature, the gold represents childhood and when Then leaf subsides to leaf humans slowly lose their innocence as they become adults.

To stay gold is to stay true in this poem. However, gold loses lust and brilliance as it becomes into a different object, very much like how people lose innocence and they change their nature into a different person.

Although gold represents purity and innocence, it also shows ignorance.  To be human is to have taken from the Tree of Knowledge and gain conscious of knowledge. As people progress through their lives, ignorance along with innocence slowly fades away. Frost also exemplifies how quick reality sets into ones life when he writes, But only so an hour. Frost shows that after losing innocence and ignorance, knowledge and reality takes place instead. However, this poem can also apply to other things seen in human nature. For example, happiness does not stay forever just as people cannot live forever. At one point sooner or later everything fades away, thus Eden, who represents humans, sank to grief and Frost shows how nothing can stay gold.

Similarly, the poem Dust of Snow is about nature and how Frost feels related to nature. His connection is seen when he says how the crow shook down on him and the dust of snow from the hemlock tree gave him a change of mood. The poem makes implies that before the crow shook the snow on him that the narrator in the poem is depressed or sad or else the poem would not say Has given my heart/A change of mood. However the persons emotion changes when the dust of snow falls on him from the hemlock tree. Although the poem is very simple, there is significant meaning toward human experiences. The first line opens the poem with, The way a crow. This crow symbolizes a dark part or some sort of bad event in the narrators life. This evil has caused the narrator to be depressed and sad. Snow on the other hand, represents lightness, in contrast to the crow.

A hemlock tree is a poisonous plant, so the snow that came down on the narrator is not a good thing. However, the shaking down of the snow symbolizes a trigger in the narrators life. The poem became more optimistic as Frost writes, Has given my heart/A change of mood. The person in the poem is now seeing the glass half full instead of half empty. Thus the poem concludes, And saved some part/Of a day I had rued. This shows that whatever had made the narrator depressed in the beginning could not have possibly been worse than his situation at hand. Thus Frost shows how people should be appreciative of what they have and on a larger scale appreciative of their life. For whatever happens to someone there can always be something worse and people tend to forget happiness when they have already experienced sadness.

Both these poems show the importance of life. In Nothing Gold Can Stay Frost shows how innocence is replaced by knowledge, thus making innocence a thing of the past, something which everyone must go through but cannot go back. In The Dust of Snow the poem shows how people should put the dark pasts behind them and look at the brighter side of life. In both cases Frost effectively shows the value of life to humans.

The perspective in “Nothing Gold Can Stay” can be interpreted on biological, mythic, and theological levels. In a biological view Frost shows how gold loses its value over time. On mythic and theological levels Frost incorporates Eden and how he valued leaves like gold until they too tarnished away. In this poem Frost shows a point in life when the golden illusions of youth have vanished. The poem also shows that this perspective is seen from people who have experienced loss and gained wisdom.

In the same way, Dust of Snow is a mature perspective and requires someone to have gone through life to recognize the meaning behind the poem. In a literal sense, this is situation is very realistic and could happen anytime in anyones life. However the poem regards to individuals who have had dark life experiences who have become pessimists over their course in life. The poem shows truth in human nature by using the crow, snow, and hemlock tree, all elements of Mother Nature, to symbolize human experiences. All in all, although this poem seems light-hearted at a glance, a thoughtful analysis shows that the poem has much deeper meanings especially in the value of life.

The form in Nothing Gold Can Stay is composed of eight lines making the poem an octave. The rhyming pattern is aabbccdd. The poem is tightly constructed, shortly written with the longest line consisting of only 6 words. When read, the poem is easier to think about the poem in sets of every two lines as each set expresses a single idea. When read, the poem sounds somewhat lyrical and ends like how a short story would end.

Likewise, Dust of Snow is also an octave. The poem also has a rhyming pattern too, but unlike Nothing Gold Can Stay Frost writes his poem in an abab fashion. Also similar to Nothing Gold Can Stay this poem is short and quite simple with the longest line consisting of only 6 words. The simplicity of this form also ties with the theme in that anything no matter how simple, like being shaken down with a dust of snow, can change a persons view on life.

In Nothing Gold Can Stay the diction presented is extremely simple. No word is longer than two syllables. Most are monosyllabic. Each word is easy to grasp, words that a children would use to make this poem. Again, this ties in with the theme of the poem, the loss of innocence. These words are very innocent and uncomplicated with lots of imagery such as flower, leaf, and gold. The only word that is more sophisticated is the word grief but this can be interpreted as the loss of innocence.

Also, in Dust of Snow, Frost uses words of great simplicity with vivid illustrating qualities. Again, no word is longer than two syllables and most of the words are monosyllabic anyway. The words are easy to understand and that too connects with the theme. The simplicity of the words that Frost use shows how pure human nature is and that it can be seen with such straightforwardness.

The style seen in Nothing Gold Can Stay is both simple and richly vibrant. In the first four lines, Frost’s imagery quite literally describes how new leaves emerge as yellow or golden blossom before they develop into green leaves. “Her early leaf’s a flower,” the speaker observes. This period of blossom, however, is very brief. “But only so an hour,” the speaker then immediately qualifies. This illustrious style that Frost uses makes understanding his message easy for readers to interpret.

Nothing Gold Can Stay and Dust of Snow are two poems both about human nature through Mother Nature. By analyzing through theme, perspective, form, diction, and style Frost shows his comprehension of loss of innocence and appreciation of life. All in all, Frost shows that everyone goes through innocence and loses it when they begin to understand and the appreciation of life.

"Nothing Gold Can Stay" and "Dust of Snow" both by Robert Frost. (2016, Jul 27). Retrieved from https://studymoose.com/nothing-gold-can-stay-and-dust-of-snow-both-by-robert-frost-essay 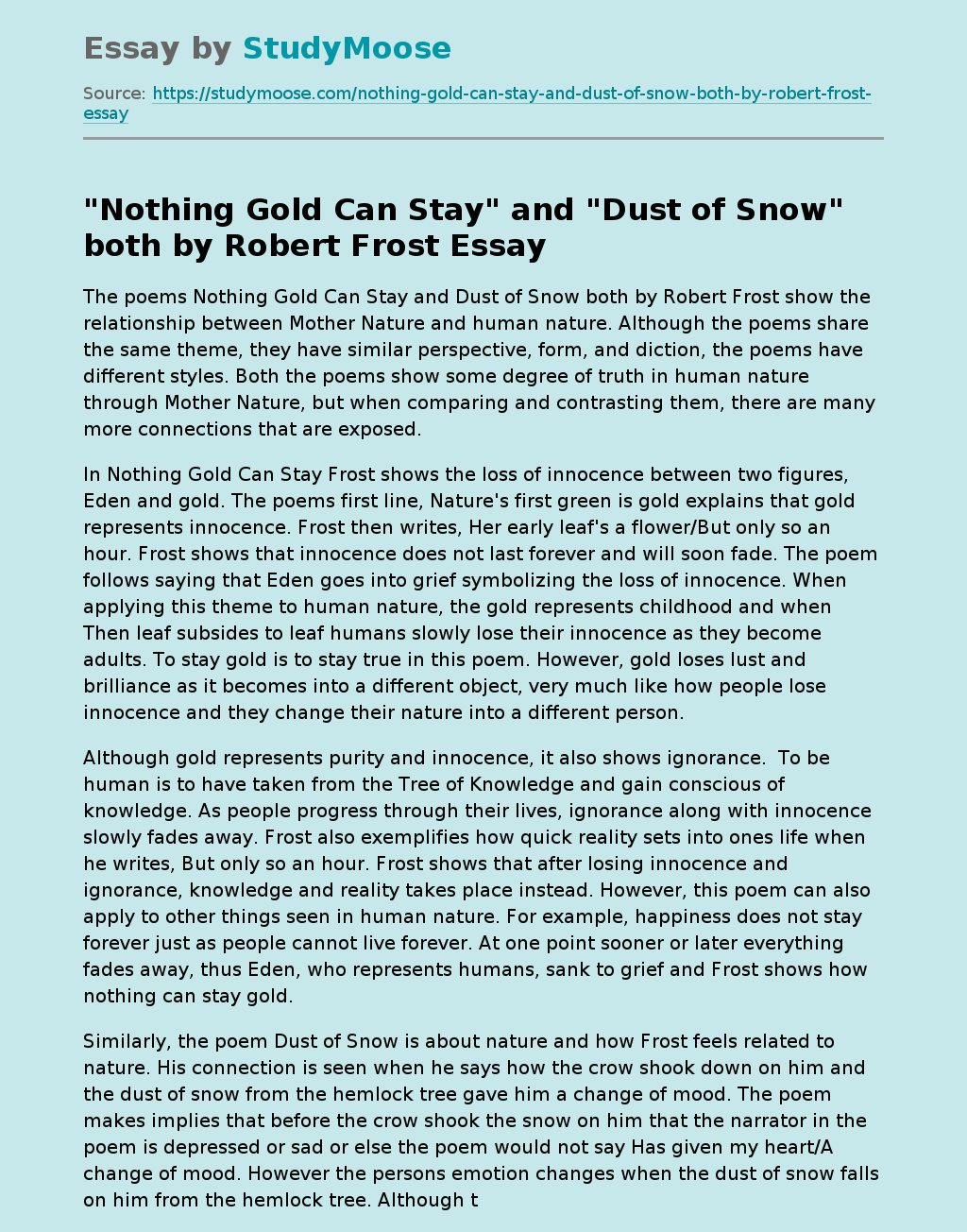