During his lifetime, Robert Frost wrote poems that relate the confusion, anxiety, and struggles of the human mind. In his poems, he depicts how people’s minds may be imbued by confusion and anxiety as they experience pain and explore life’s possibilities. Particularly, in “The Road Not Taken” and “Acquainted with the Night,” the poet illustrates how thee two themes can lead a person to attempt to escape reality and give up one’s life. The two poems share similar elements, one of which is the persona.

Don't use plagiarized sources. Get your custom essay on
“ Confusion and Anxiety in Robert Frost’s Poems ”
Get custom paper
NEW! smart matching with writer

Both poems form the image of a confused person, someone filled with much anxiety. In “The Road Not Taken,” the author makes an analogy between the persona’s situation in the woods and real life decisions one has to make in life. As the persona chooses between the two roads in front of him, he wants some assurance that the road or decision he will make is right. Seeing that both roads look the same, he is quite confused which one to take.

Nonetheless, he takes the road which he describes to be untraveled.

Likewise, the persona in “Acquainted with the Night” suffers from confusion; but unlike the other, his confusion is worse and more intense, somehow similar to a dilemma. The way the author presents this is also climactic. First, he mentions the journey that he has taken, “I have walked out in rain — and back in rain. I have outwalked the furthest city light. I have looked down the saddest city lane.

(2-4) These journeys have made the persona weary and confused, which is why he claims to have been “acquainted with the night.

” The night in the first stanza refers to the different images of the night that people are usually aware of. As he reveals in his journeys, there is the image of night based on its literal meaning, the image of night as the darkness or confusion, then there is also the image relating to sorrow and emptiness. As the two poems relate the journeys they take, the time element of the poems becomes significant. In the first poem, the persona describes a momentary confusion that could affect his lifetime. The decision he makes that time would reveal other realities he will face in the future.

This shows the tendency of the persona to persevere and move on, despite obstructions along the road. In contrast, the persona in the second poem imparts a confused state that has long existed. As he reveals, he has been to many places, and has experienced a lot of sadness, thus he has been “acquainted with the night. ” This ailing confusion makes him decide to stop, as he relates, “I have stood still and stopped the sound of feet. ” This shows the desire of the persona to stop the confusion, or end the sorrow, which similarly suggests a desire for death.

This is the very reason why the first line is repeated in the last stanza: to establish a different meaning of “night. ” The luminary clock in line 12 is time itself, with all its abstractness. As it declares that “time was neither wrong nor right,” it tells the persona that it is not yet the right time for him to die, and in fact, it cannot declare whether it is the wrong time either for no one can actually predict death. Notably, as the persona confronts all these confusions, he implies the desire to discontinue, unlike the other persona who is more optimistic about his fate.

As the personas in the poem think about their present struggles, they experience some anxieties. In the first poem, the persona expresses his anxiety regarding the road ahead of him, “I doubted if I should ever come back. ” (15) In the real sense, he is anxious of the challenges he needs to face in life as he takes the untraveled road. In the second poem, the persona shows anxiety regarding sorrow and death. As he desires and waits for death to come, he apprehends and takes note of its coming in another person’s house “far away an interrupted cry came over houses from another street.

” (8-9) It is not clear how the persona feels about his failure to die, but this thought adds up to his anxieties. The themes of confusion and anxiety are commonly illustrated in the two poems based on the mental processes that the personas undergo. As both personas undergo these experiences, there shows a tendency to digress or escape their present confusion. In the first poem, the persona wishes to elude the road he has taken but realizes there is no turning back while in the other, the persona tries to escape his sorrows by welcoming death.

As both personas fail to give up their present realities, the author intentionally imparts a unified message to his readers; that is, no matter how confusing or challenging life is, taking up our journey is still the wisest option. 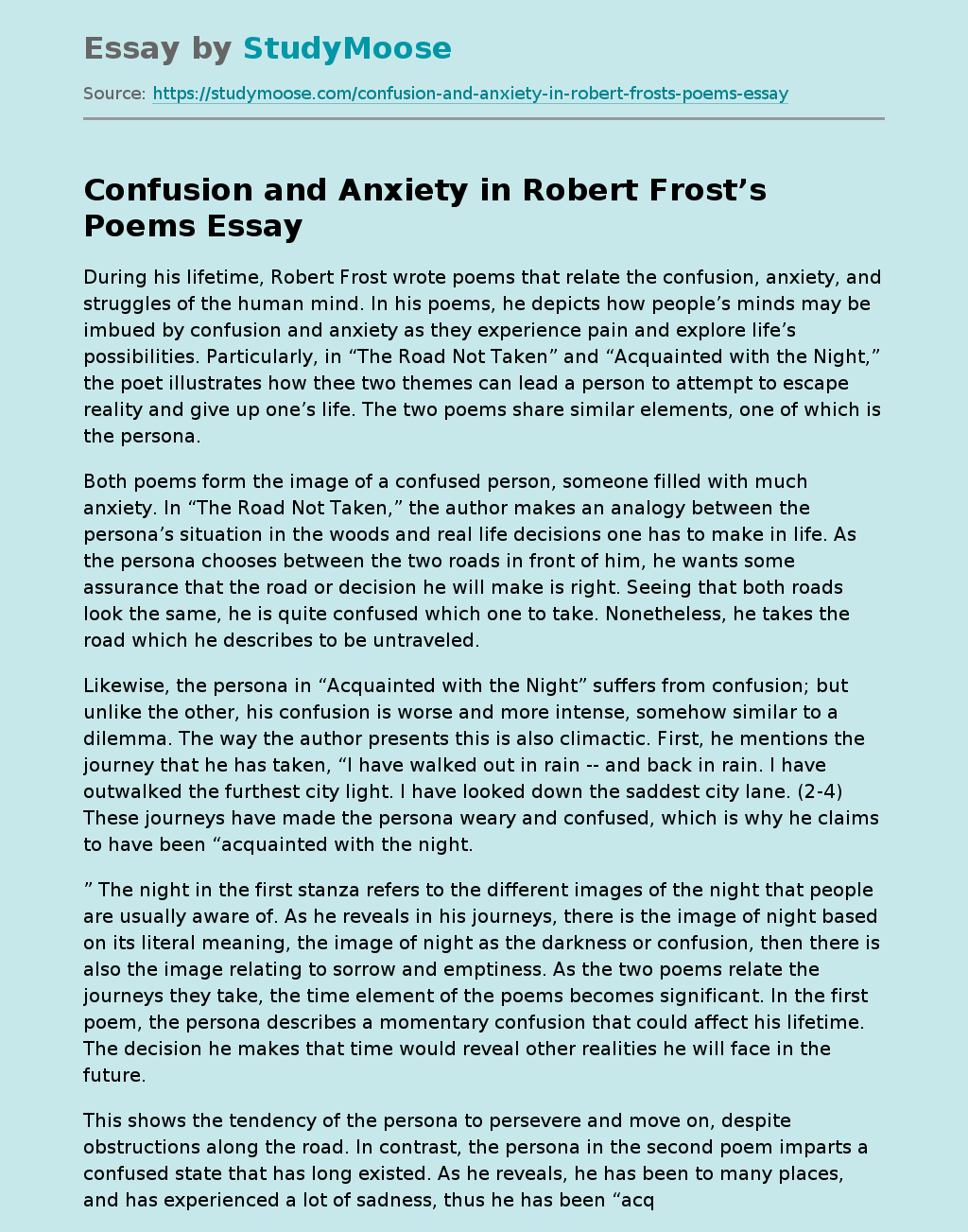