Personal Identity refers to the essentials of a person. It includes those traits that distinguish one person from another and one’s consciousness of his own being or identity (Encarta 2001). Defining one’s own identity is a very important developmental task for any adolescent. From a psychosocial point of view, striving for a unified and integrated sense of self may assist in defining personal goals and the sense of direction. It may also promote the constructive integration into society. The search for identity is a persistent theme in our society.

Don't use plagiarized sources. Get your custom essay on
“ Identity vs. role confusion ”
Get custom paper
NEW! smart matching with writer

Social scientists use the term “identity” in a variety of ways to explain an assortment of phenomena. Some vocabularies such as: identity crisis, finding yourself, self-actualization, self-realization and the likes are used for the search for identity. For the purpose of this paper, Identity is an internalized, self-selected concept based on experiences inside the family and outside the family. Identity forming takes selection of values, beliefs, and concepts that may define one’s sense of self.

Identity cannot be separated from the culture since it is the very foundation of it.

The identity of the individual develops and sets across one’s lifespan, beginning with a young child’s awareness of significant others and an initial sense of self and extending to the older adults’ summation, integration and evaluation of ones life accomplishments (Erikson, 1963). Identity, then, is a broad term, which describes the general aspects of the individual’s total personality – that is, the formation, absorption, or incorporation of, for example, societal norms, values, beliefs, and standards.

Identity is determined by the intrapersonal, interpersonal, and environmental characteristics, and interactions of significant components of an individual’s unique world. Review of Related Literature Erik Erikson Erik Erikson is American psychoanalyst, who made major contributions to the field of psychology with his work on child development and on the identity crisis. He specialized in child psychoanalysis. In 1933, when he migrated in the United States, Erikson became interested in the influence of culture and society on child development (Encarta 2001).

He studied groups of Native American children to help formulate his theories. These studies enabled him to correlate personality growth with parental and societal values. His first book, Childhood and Society (1950), became a classic in the field. As he continued his clinical work with young people, Erikson developed the concept of the “identity crisis,” an expected conflict that goes with the growth of a sense of identity in late adolescence.

He is considered a Freudian ego-psychologist; this means that he takes the foundation of Freud’s theories, but turns away by focusing on social and cultural orientation instead of a sexual one. Erickson’s theory closely ties personality growth with parental and societal values. Developmental Psychology Developmental Psychology is one field in Psychology that deals with behavioral changes and continuity from infancy to adult stage (Meyer 2001). A great deal of emphasis in psychology has been given to the child and to the deviant personality.

Developmental psychology is particularly significant, then, in that it provides for formal study of children and adults at every stage of development through the life span. Developmental psychology reflects the view that human development and behavior throughout the life span is a function of the interaction between biologically determined factors, such as height or temperament, and environmental influences, such as family, schooling, religion, and culture (Meyer 2001). Studies of these interactions focus on their consequences for people at different age levels. 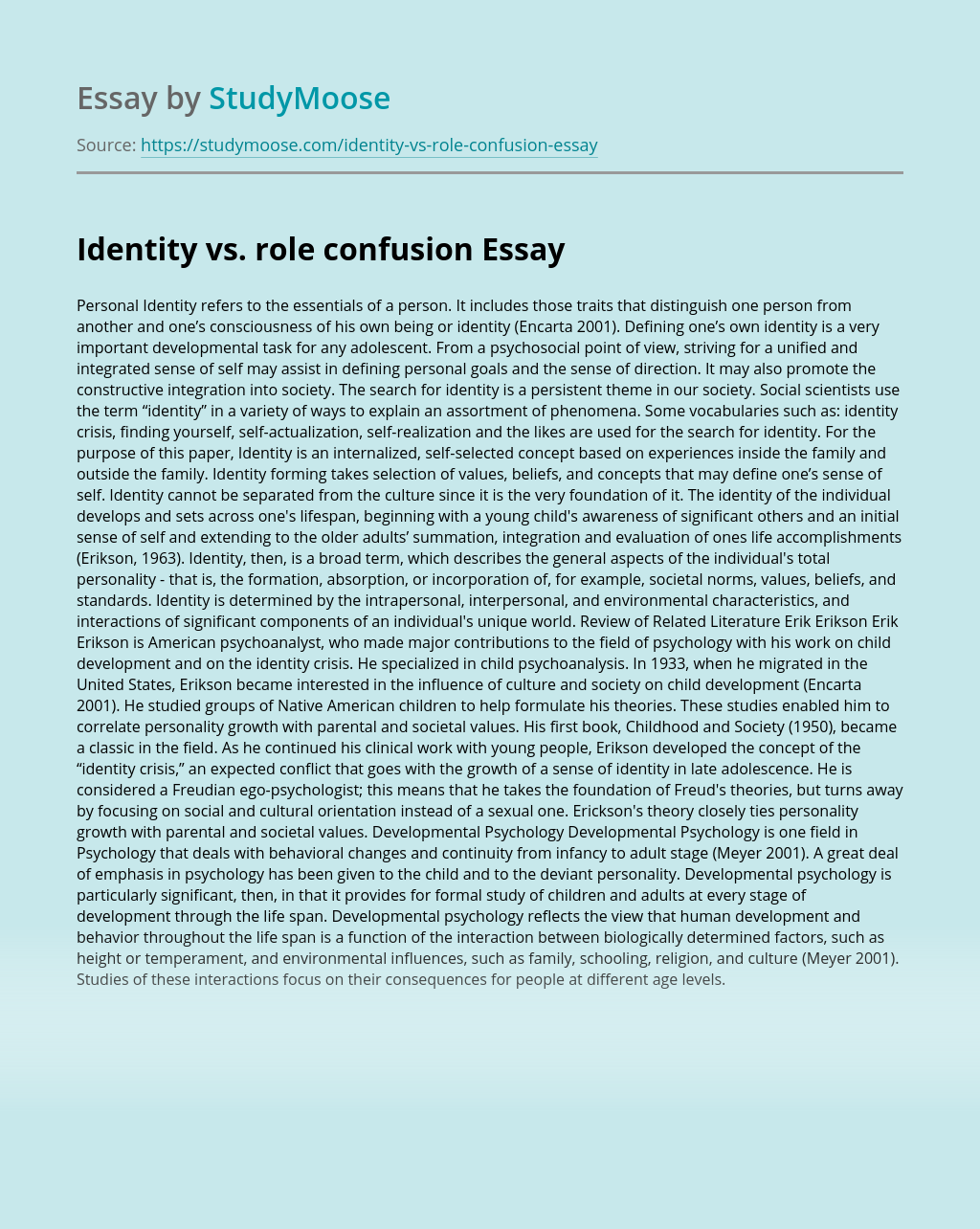