Ethnic Identity Is an Interactional Identity: the Instrumentalist Approach

This paper will discuss about the concept of ethnic identity as interactional identity by looking at the instrumentalists approach. In order to make sure that this paper is well – discussed, organized and easy to be understood, it will be divided into three section; introduction, core assumptions and arguments before we can sonclude the discussion. In the introduction section, we will examine the definition of ethnic identity and interactional identity. The definition will be divided by two; literal and conceptual.

For the purpose of this paper, the core assumptions and arguments section will imply the main idea of ethnic identity, so as the interactional identity that have been discussed by many scholars, to be fair, the example and critical thoughts will be given.

Don't use plagiarized sources. Get your custom essay on
“ Ethnic Identity Is an Interactional Identity: the Instrumentalist Approach ”
Get custom paper
NEW! smart matching with writer

Lastly we will conclude the essay by re – determine the relations between the ethnic identity and the interactional identity. The word ethnic has being viewed by various perspective in the world of ethnic studies. The most crucial condition is when people thought that ethnic is just the same as race.

However, those crucial thought have being denied by most scholars.

We can say that Indian is black, but it does not reflect their ethnicity as well as Caucasian is white. Those complex definition leads to critical problem which people nowadays could not identify ethnic group and ethnic identity. Before we go to the core assumptions of this paper, let’s define those two terms. An ethnic group is a group of people whose members identify with each other, through a common heritage.

It is often consisting of a common share of the same language, culture, ideology, and sometime including religion, that stresses common ancestry (Wikipedia, 2011).

Nakamura (2012) imply that ethnic group is a group of people who believe that they share the same ancestry, history, cultural traits such as language and religion which are distinct from other groups. Meanwhile, in the other hand, ethnic identity as suggested by Phinney (1996), it is the extent to which one identifies with a particular ethnic group (s), refers to one’s sense of belonging to certain ethnic group and the part of one’s thinking, perceptions, feelings, and behavior that is due to ethnic group membership. The ethnic group tends to be one in which

the individual claims heritage. Thus, we can simply say that the terms ethnic, ethnic groups and ethnic identity are very different in meaning. However, the terms are rooted by one general idea of ethnic, they are separated by which is ethnic identity is more to how individual define their ethnicity and individual group is in a collective way since they believe that they share the value of ethnicity. Coming back to our core assumptions, the ethnic identity is an interactional identity. Again, to really understand the term, we need to define the term interactional.

According to MacMillan web dictionary, there are two definition of interaction; it is the activity of being with and talking to other people and the way of people react to each other, secondly, it is the process by which different thing affect each other. So, based on the definition, we can say that interactional means the way on how people connect and interact to each other. Nakamura (2012) imply that ethnicity is not something that fixed because it’s situationally defined. Ethnic groups are created through particular interactional, historical, economical and political circumstances.

The important things is a process of determining ‘us’ vs ‘them’. The process will only shows the result when there are interaction occurred. In an easy word, people would not simply think about their ethnic identity when they are alone. The analogy is simple, A is a Malay – Pakistani descendant in Malaysia. When A with his Chinese and Indian friend, A will say that he is Malay. However, when he show up with his Malay friend, he started to think that he is Pakistani since his grandfather is Pakistanian. This situation is really suits to explain by looking at the instrumentalist approach.

Instrumentalists seeing ethnicity as socially constructed, it is not given, the other central idea also, they seeing ethnicity as malleable. Hence, by these two central ideas, we believe that social structure can really affected in interactional identity, people want to be treated and expected by others that can give benefits to them. Nagata (1974) says that, in Malaysia, the Arab migrant consider themselves as Malay in front of Chinese and back to their Arab origin when they are with Malay.

Why do you think so? It is because they can get the privilleges and benefits as Malay owned by the government as Malay are Bumiputera which constitutionally received a lot of privelleges than other ethnics in Malaysia. However, when there are bad perspective implied on Malay, then simply switch back as Arab. It is because they do not want appear as a person that will be put on bad perspective toward them. For instance, Malay to others is the ethnic that lazy, no initiative to enhance their social economic condition and poor. By those negative perspective, they tend to switch back as Arab descendant.

This is in line with Nakamura (2012), she say that Weber’s instrumental approach can be understood in relation to class and social strata. According to Donald Noel, a sociologist who developed a theory on the origin of ethnic stratification, ethnic stratification is a “system of stratification where some relatively fixed group membership for example race, religion, or nationality, is utilized as a major criteria for assigning social position” (Wikipedia, 2011). The statement by Noel prove that the process on the interactional identity work inside the ethnic identity.

In a nutshell, we can conclude that ethnic identity is an interactional identity when people are start to interact and contact each other. It is normal because people want to be treated by others the best others can give. It is also occur because people want to set up a boundary between people just to differentiate them and it will makes them feel secure and belonging. In line with english proverb, ‘to feel special, we need to be a part of something special’ really suits the condition of the interactional identity. BIBLIOGRAPHY Barth, F. (1995). Ethnic groups and boundaries.

Ethnic Identity Is an Interactional Identity: the Instrumentalist Approach. (2016, Dec 29). Retrieved from https://studymoose.com/ethnic-identity-is-an-interactional-identity-the-instrumentalist-approach-2-essay 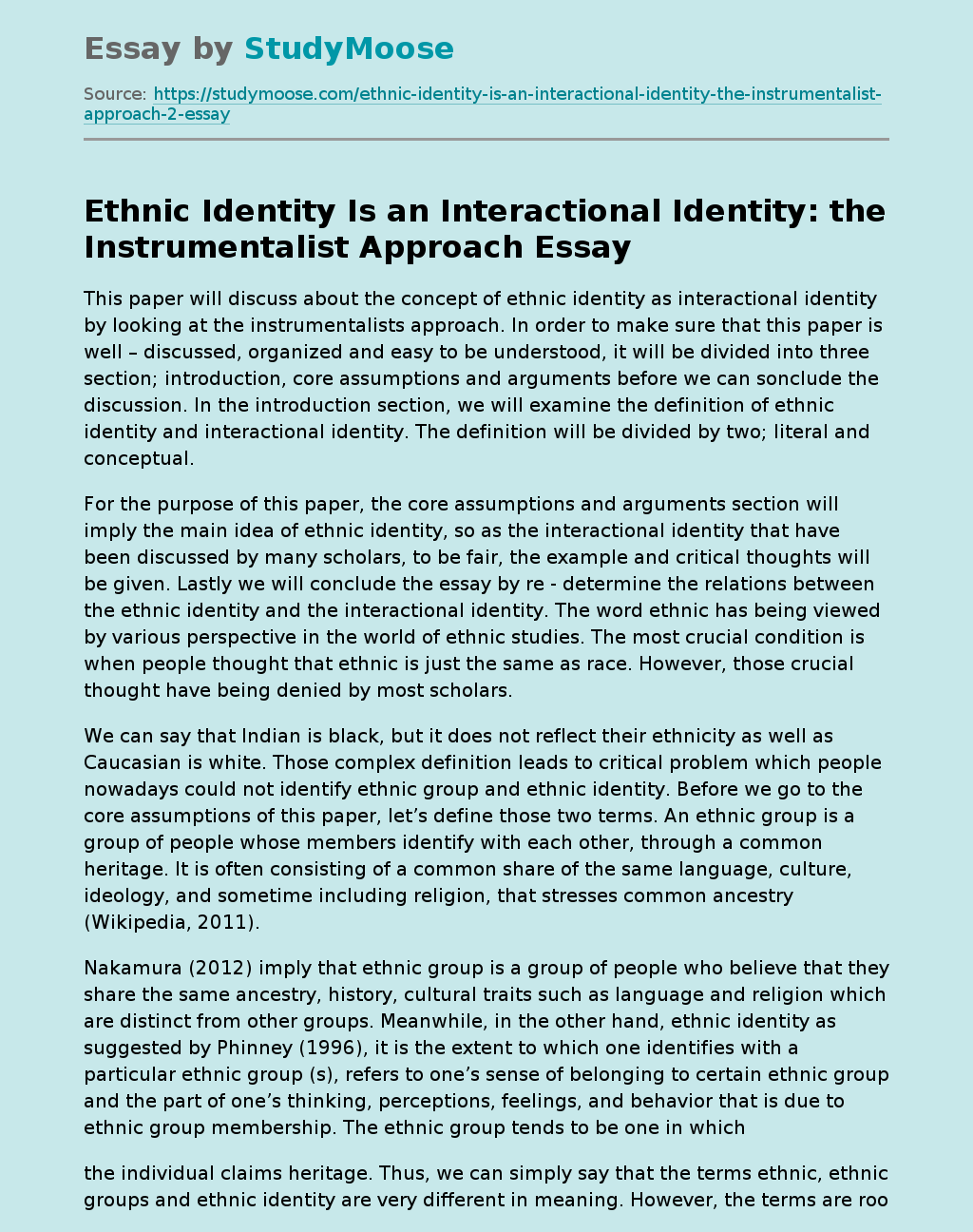