The different beliefs, characteristics and looks of different ethnicities give more diversities in a place. The differences in cultures create color in every region. It allows people to understand each other and respect each other’s differences and beliefs. On the other hand, these differences are emphasized too much that instead of being the key to a harmonious living, leads to gaps, differences and even fights (Singelis 4). In a certain region, diversity is inevitable especially in a place like the United States.

Don't use plagiarized sources.
Get Your Custom Essay on Cultural and Ethnic Diversity Just from $13,9/Page

The United States is the melting pot of many cultures.

Over the years, the country has become the destination of people from all over the world to achieve their dream. It seems that each state has its own taste of a different culture. Aside from that, immigrants have slowly settled in the country making it much more diversified. You wouldn’t be surprised that there is a little China Town in every state.

There is also a growing number of Muslims in the country. This is a good sign for us as it shows that the war does not hinder our Muslims brothers to reside in our country. They are also given the freedom to stay here whenever they want.

Other nationalities such as Filipinos, Indians, Japanese and Koreans have chosen to stay in the Land of the Dreamers. The Americans are known for their quest in reaching our dreams. And that is probably one of their best attributes. It is also probably one of the reasons why a lot of people choose to settle here. They too think that they will reach their dreams by going to America. Despite the diversity that has evolved in our culture, there is still this distinct American taste that is present is the American culture. This distinction in each culture paves way for people to know each other.

(Singelis 152) Each culture, ethnicity is proud of its heritage. American families, for example, are very particular in implementing the American culture. American parents taught their children to love their country and have pride that we are Americans. This is, after all, the Land of the Free and the Home of the Brave. Our families teach us to be good Americans by passing on the value of citizenship, American holiday celebrations and traditions, leadership, entrepreneurship, competition and positive attitude. On the other hand, each culture is like that.

The media plays a huge role in exposing the differences in each culture. Movies, documentaries all feature distinct qualities of each culture. These differences are somehow exposed in wrong way. Most of the time, cultures are perceived based from what people hear about them. I really think that the differences in cultures and ethnicities are given too much emphasis without being aware of it. In effect, this led to conflicts and gaps between cultures. It is a sad fact that instead of being united especially in these times of crisis, we are still separated by our personal beliefs.

The media would be a really good help in promoting unity. It would help if similarities are focused and if people will be taught to respect one another’s beliefs too. A good example of this would be the movie Gran Torino. The movie is about an American old guy who lives near a bunch of Hmong people. Hmongs are people from China, Laos, Vietnam and Thailand who came to the United States to find their fortune. They decided to live altogether in one neighbor so that they too can perform their traditions and gather often.

The American guy and some of the Hong’s turned out to be true friends and depended on each other. It was good to see the culture of the Hmongs in the movie. It was an eye-opener to many of those who have watched it. The only similarity between the American and the Hmongs was that they both wanted to live peacefully. It happened when they got to know each other and respected their own beliefs (The Gran Torino 1). Movies like Gran Torino should be featured more often. I think it is a good thing to showcase the different distinction of each culture especially the minorities.

These minorities deserve their recognition from the world. Maybe with given much time, people should get to know the history, beliefs and traditions of the many cultures and ethnicities especially if they are just in the neighborhood. It is good to know that we are uniting for the sake of living peacefully and harmoniously. Work Cited Singelis, Theodore. Teaching about Culture, Ethnicity and Diversity: Exercise and Planned Activities. California: SAGE Publishing, 1998. “The Gran Torino. ” 2008. Retrieved 20 February 2009 <http://www. thegrantorino. com/>. 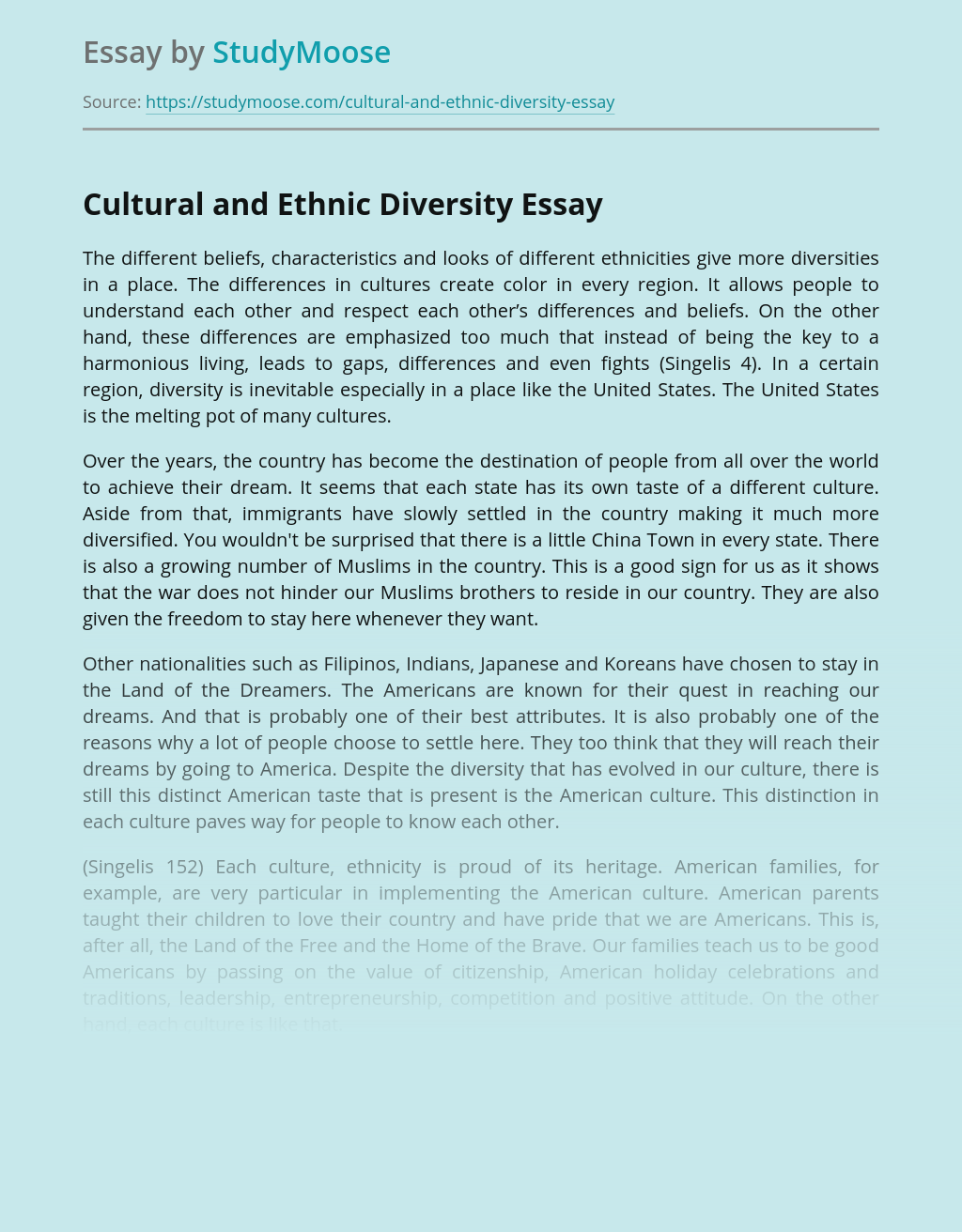 Education in a cosmopolitan Society

5 / 5 ( 1 vote ) Multiculturalism is being challenged by new theories of cosmopolitanism. Discuss in relation to education. Theories of multiculturalism and cosmopolitanism have had a profound effect on Australian curriculum and education. Issues such as racism and secularisation have been a prominent feature of discussion in relation to the way it...

5 / 5 ( 1 vote ) For this interview, I invited a 32 year old single, Indian male who had been a resident of the United States for more that 10 years. He is a resident of San Jose California. However; he is always designated in different parts of the country. He is currently...

5 / 5 ( 1 vote ) Ancient Egypt was a fascinating and complex place. Luckily for historians, Egyptians had made great strides in record keeping which have made studying their culture and society easier than some previous historical eras. Ancient Egyptians were a people who were intensely religious, deeply divided by gender roles and...

5 / 5 ( 1 vote ) 1: Educating workers around the world: Due to globalization, managers and employees of hospitality industry are able to learn about the different cultures, people, religions and other different prospects of life. Globalization also helps them to understand what importance of humanity is. Racism is still a part of...

5 / 5 ( 1 vote ) Cultural anthropology is one of the most important fields of anthropology that explores cultural variation among people and promotes culture as a meaningful scientific concept. The aim of this paper is to explore the key concepts, such as subsistence practices, economic systems, issues w/social stratification, marriage practices, kinship...