Practices of the Muslim religion have become of great concern in the contemporary society especially in issue of world peace. Islam values and beliefs have raised controversy between followers and non-followers where the latter criticize the religion as threat to peace. This paper will explore teachings of the Islam religion to provide understanding of beliefs, values and practices in effort to resolve the controversy. This will be achieved by discussing the main pillars of Islam: Shahada, Salat, Sawm, Zakat, Hajj, Islamic law (Shariah) and Jihad (Pecorino, 2001) as well as showing application in cross cultures and nations.

Turn in your highest-quality paper
Get a qualified writer to help you with
“ Islam Religion and Cultural Diversity ”
Get high-quality paper
NEW! AI matching with writers

The paper will also show how Islam is contrasted form Christianity and Judaism. Further, it will outline how understanding of Islam would impact interactions or communications between Muslims and non-Muslims. Eventually, the paper will summarize main arguments.

There is diversity in Muslims and several core beliefs are held to bring unity in the religion all over the world.

There are five main practices described in Quran for Muslims to observe and are commonly regarded as pillars of Islam. The first one is the declaration of faith (Shahada) that requires Muslims to bear witnesses as well testify for only one God, Allah, and His messenger Muhammad (Esposito, 2002). This declaration is needed for anyone to become Muslim and has two aspects. One part affirms absolute monotheism, oneness of God, and that associating other things to God is idolatry which is unforgivable sin. This would serve to correct Muslims on deviating from the right path of believing in one God.

The second part asserts that Muhammad is both a prophet as well as God’s messenger and hence forms the highest revelation of God’s messages to Muslims. Moreover, Muhammad life is an example that serves as role model for Muslims to emulate.

The second pillar of Islam is the prayer which as known as Salat and require Muslims to worship God by praying five times in day, that is, in the morning, noon, mid-afternoon, sunset and in the evening. In many places prayer times are alerted to Muslims through mega speakers at mosques’ minarets. This serves to remind believers of God’s presence in their daily activities and hence need to reaffirm dependence on Him. The prayers are accompanied by rituals and were established by Muhammad though are not in Quran. However, prayers consist of citations from the Quran and movements observed such as bowing, kneeling, and touching ground with the forehead signify expression of humility and God’s adoration. Muslims can pray anywhere such as places of work, houses, and mosques though preferably in groups for solidarity and should face Mecca that is regarded a holy city.

The prayers are orderly with same start and ending.

The third pillar is the Zakat that means purification and requires Muslims to worship and give thanks to God by supporting the poor. All things are believed to be owned by God and Muslim believers are required to give 2.5 percent of all they possess every year so as to support the poor, orphans, widows and those needy (Esposito, 2002). Zakat is observed as a social security in Islam and was developed about fourteen hundred years ago. In some Muslim groups, believers also contribute religious taxes out of their incomes to religious leaders and are used to support the poor. The fourth pillar is observing the fast of Ramadan (Sawm) during the ninth month of every year according to Islamic calendar. This month is regarded as Ramadan and is observed since was the time when Muhammad received first revelation of the Quran from God. During the month-long fast believers are required to abstain from foods, drinks, and sexuality between dawn and sunset.

Ramadan consists of special prayers cited and foods served only during this period. In the 27th day Muslims commemorate the night of power when Muhammad received God’s revelation and the Ramadan ends with celebration of Eid al-Fitr to break the fast and give gifts (Esposito, 2002). Ramadan is meant to stimulate reflection of believers on dependence of God, spiritual values and responsibility to care for less fortunate. The fifth pillar is the Pilgrimage also known as Hajj to Mecca in Saudi Arabia and requires all able adult Muslims worldwide to visit the city at least once in their lifetime. It follows Ramadan and requires sacrifices of time, things and comforts hence making Muslims pilgrims in God’s service. There is also lesser pilgrimage called umrah that that involves visits to other holy sites during other periods of the year.

There are other teachings of Islam practiced worldwide and are more shaped or shape cultures in which they are applied. These include Jihad that is regarded as the sixth pillar and the Islamic law. Jihad is explained in Arabic as meaning to struggle or exhaust one’s efforts to exalt God though is interpreted to mean holy wars in some cultures (Pecorino, 2001). Within Islam, Jihad can be applied to lead virtuous life, charity works, preaching and fighting to defend Muslims. The Islamic law defines Islam as submission to God and hence Muslims have moral responsibility and observe Jihad in the path of God also known as Shariah. The law provides guideline for relations and interaction of believers with God as well as with amongst themselves (WGBH. 2014).

Islamic law on regulation of social life include prescription of dressing codes, rituals in marriages, divorce, inheritances and behaviors that would connect all Muslims all over the world. These provisions are applied to varied magnitudes over varied cultures. This has been influenced by interactions of people due to globalization and modern law incorporates integrated cultural practices (UTA, 2009). The requirement of Muslims to exercise moral responsibility in legal, political and economic practices is also shaped by cultural practices in diverse geographic and historical contexts. Similarly, the Islamic laws influence social frameworks.

There are varied practices of Islamic teachings as observed in low Islamic conviction is western nations compared to high levels in countries to the East. America and Great Britain regard Islam as strange religion compared to other religions and has expressed little support for values advocated by Muslims in national structures (PRC, 2012). However, Muslim converts are growing in the two nations and followers observe the pillars of Islam and other teachings. Middle East, India, Pakistan and other Asian nations show strong support for Islam and have large Muslim populations that observe teachings of the religion. These countries have frameworks that reflect teachings of Islam, for instance, in their laws, political, economic activities and social practices such as behavior, marriages and support for the needy among their populations.

Contrasting Islam from Christianity and Judaism

The teaching of the Islam indicated above compare or contrast with some in Judaism and Christianity. Some of the contrasts include the oneness of God that is inconsistent with Judaism and Christianity that also advocate for monotheism and believe in trinity: God the Father, Son and Holy Spirit. God in Islam is not associated with other things that contrast with some Christians and Judaism followers that have some representation for God (Esposito, 2002). Muslims worship God through Muhammad who is God’s messenger and prophet unlike in Christianity and Judaism that worship God through Jesus who is regarded the son of God. Muslim religion believes Muhammad was the last prophet send by God to human beings and shows acknowledgement of other divine figures send to Christianity and Judaism in the Quran whereas the latter do not acknowledge other religions, for instance, Muhammad send to Islam.

Influence of Islam on Interactions of Muslims and Non-Muslims

There are different understandings of Islam teachings that influence how Muslims and non-Muslims interact or communicate. Muslims belief of Jihad has been conceived among non-Muslims as allowable to wars that has been strongly linked to the increased terrorist activities all over the world ( 2002). In addition, the contributions raised in through Zakat are misunderstood as avenues for financing war activities rather than benefiting the less fortunate. This has sparked rivalry among people since Muslims are considered as threat to world peace. This has been witnessed in conflicts based on religious inclination in some countries such as Nigeria. This rivalry would also be said of conflicts of America and nations with majority Muslims such as Afghanistan.

This perspective has misconceived the aim of Jihad and would be overcome through advocating for moral value of peace possible through tolerance of religious diversity by both sides. Islamic laws regulate behaviors, communications and modes of dressing that create disconnection with other practices in the world and this hinders interactions such as marriages and talks that include education. Varied practices related to religious faith does not allow free environment to interact and hence limit integration. This would be minimized through enhanced understanding of practices for both sides since ignorance of values observed by different religions induces misconceptions that limit interactions.

Muslim religion has induced controversy among followers and non-followers in contemporary society especially when world peace is considered. This paper has discussed Muslim teachings practiced over the world in attempt to resolve the controversy. Muslim practices are embedded in pillars developed following the Quran. These pillars are Shahada, Salat, Zakat, Sawm, Hajj, Jihad and Shariah. Provisions of this pillars aim at worshipping one God and are carried out all over the world though are shaped or shape cultures.

Western nations show little support of Islam in aspects of life when compared to nation to the East. Islam contrasts Christianity and Judaism through belief in oneness of God and Muhammad, acknowledging other religions in Quran, single denomination, allowed polygamy and more restrictive behavior and dress codes. Different understandings of Islam by non-followers negatively impact interactions and communication with Muslims and this has led to religious conflicts.

Islam Religion and Cultural Diversity. (2016, May 28). Retrieved from http://studymoose.com/islam-religion-and-cultural-diversity-essay 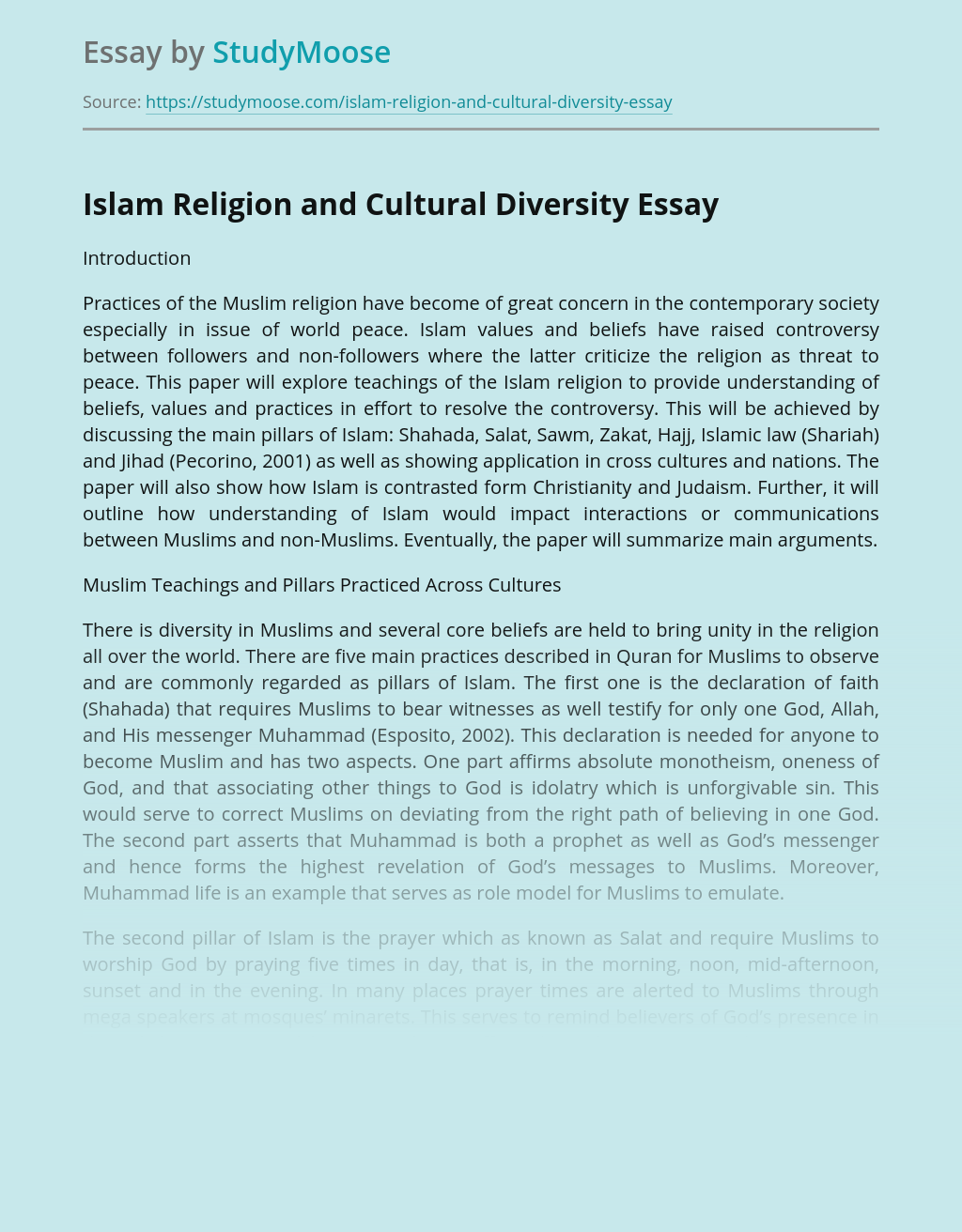 Turn in your highest-quality paper
Get a qualified writer to help you with
“ Islam Religion and Cultural Diversity ”
Get high-quality paper
Helping students since 2015
Stay Safe, Stay Original