Oppossition in Makkah to Islam Religion

Don't use plagiarized sources. Get your custom essay on
“ Oppossition in Makkah to Islam Religion ”
Get custom paper
NEW! smart matching with writer

The opposition of the Quraish to the message of Islam greatly influenced the rest of the Arabs to reject Islam as well. In fact the influence of the Quraish was so great that even if they had not exerted themselves in their resistance they still could have swayed the people. That was because all of the Arabs looked to the Quraish and waited for their approval for many reasons such as the high status of the Quraish in the hearts of the Arabs.

They revered the Quraish because they were the people who lived close to the Kabah. For this reason the other Arabs honored and respected the Quraish and took pride in rushing to fulfill any need that they might have for food, drink or other things as well. Although Muhammad’s preaching was basically religious, there was implicit in it a critique of the conduct and attitudes of the rich merchants of Mecca. Attempts were made to get him to soften his criticism by offering him a fuller share in trade and a marriage alliance with one of the wealthiest families, but he decisively rejected such offers.

Points in the message of the Qur’an were questioned, such as the assertion that men would be resurrected before the Judgment. Commercial pressure was brought to bear on Muhammad’s supporters, and in some families there was mild persecution of junior members who followed him. In about 616 Abu Jahl organized a boycott of the clan of Hashim by the chief clans of Mecca, allegedly because the clan continued to protect Muhammad and did not curb his preaching; but, since few of the clan were Muslims, other questions may have been involved.

After three years the boycott lost momentum, perhaps because some of the participants found they were harming their own economic interests. Many in Makkah had become rich, as the city was a central trade hub and a spiritual center for polytheism. They did not appreciate Muhammad’s message of embracing social equality, rejecting idols, and sharing wealth with the poor and needy. Thus, many of the Prophet Muhammad’s early followers were among the lower classes, slaves, and women. These early Muslim followers were subject to horrible mistreatment by the Makkan upper classes. Several were tortured, others were killed, and some took temporary refuge in Abyssinia. The Makkan tribes then organized a social boycott of the Muslims, not allowing people to trade with, care for, or socialize with the Muslims. In the harsh desert climate, this was essentially a death sentence. The Makkans got together to try and get rid of Muhammad (pbuh) and his teachings. They had already openly opposed it in public and had even tried to ridicule and slander the Prophet (pbuh). They had spoken to Abu Talib and asked him to withdraw his support and protection for Muhammad (pbuh). They had failed each time and Muhammad (pbuh) continued to preach and slowly the message was spreading.

The fact of the matter was that none of these allegations were true and the Makkans knew this. How could they try and combat the message of Muhammad (pbuh) and how could they halt his message from being preached. They decided that they would consult Al-Waleed bin Al-Mugheerah – a very influential person in his tribe. Al-Waleed listened to all these allegations against the prophet (pbuh) and dismissed them all. He, however, found that the most plausible way would be to suggest that Muhammad (pbuh) was a magician and that he used magic words to influence people. They said that his ‘magic’ words would separate a father from his son, a husband from his wife, a man from his clan… They finally decided that this was the best excuse they could use to discredit Muhammad (pbuh). They would tell the pilgrims that Muhammad (pbuh) was a powerful sorcerer and that they should avoid him at all costs. To conclude, Muhammad was opposed in Makkah because rich people didn’t want to lose their power, status or wealth. Also because they believed that the idols they worshipped were good enough for their fathers. Their forefathers and so were good enough for them.

Oppossition in Makkah to Islam Religion. (2016, Mar 20). Retrieved from https://studymoose.com/oppossition-in-makkah-to-islam-religion-essay 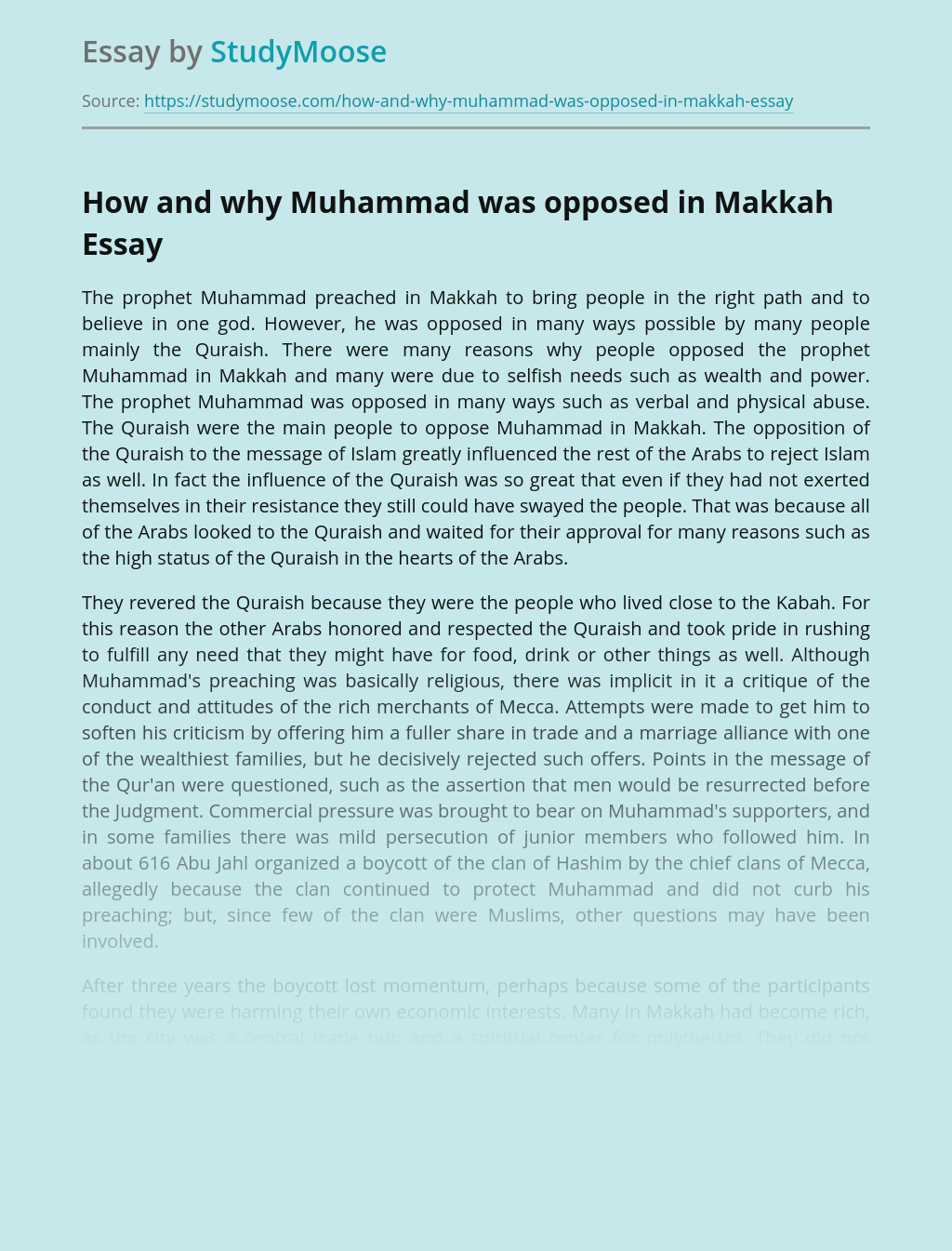