Religion and Culture Religion is one of the topics of the most significant interest and is a concern to many individuals in the contemporary world. Religion can be defined as the process in which human beings believe in the existence of a supernatural being and thereby worshiping the immortal being. Religion involves faith and divinity (Langley 2012). Examples of religions are Christianity, Hinduism, Islam, and Buddhism among many others. Religion is in all of the nooks and crannies of the world and are necessitating the need for acceptable and near provable steps to have an idea of what this human phenomenon involves.

Don't use plagiarized sources. Get your custom essay on
“ Religion and Culture Religion is one of the topics of the most ”
Get custom paper
NEW! smart matching with writer

There is a need for identifying and appreciating the many aspects of culture and the relationships that existing between religion and culture. Culture is generally the way of life of certain people, essentially meaning what we as humans do day to day. Both culture and religion involve treatment of specific issues or things as sacred; holy (Langley 2012). The relationship between religion and culture has been the center of debate for a long time, and the jury is still in existence in the 21st century.

In the book Sacred Gaze Religious Visual Culture in Theory and Practice, Morgan broadly talks about what is sacred. He incorporates his language and skills to explain the existing relationship between culture and religion. One has a better picture of the complexity of world religions and why it is a to lay down specific strategies to understand the relationship. However, the author discusses sacred areas of worship that was used by different religions where they utilize holy texts.

To have a better understanding of religion, it is necessary to make an attempt to search for answers on what is right. One of the current threats towards the knowledge of this relationship is individual differences throughout the world.There are different cultures with their norms, practices, and beliefs. But for a long time, people have believed that religion is based on one’s personality which can be argued to be a more traditional approach. In the 20th century, people believed that religious insights were based on one’s early life which helped shape personality development. One of the contributors of this was Sigmund Freud, a famous psychologist who came up with the father-son relationship. In his argument, Nye argues that religion is solely responsible for shaping the culture of a certain group of people in society. For the author, Bible Belts are sacred areas in the context of America as they form areas of worship for the Southern Baptists (NYE 2017). In many different societies, religion has a bigger significant impact on culture, and the two are just about inseparable. There are many different types of religions worldwide which include Islam, Buddhism, and Christianity with different cultural beliefs and practice (NYE 2017). To understand these religions a world paradigm approach is a must where one can appreciate the holy books, founder members, and the history of these religions. this approach helps to link religion and culture together leading to a better understanding of the two.David Morgan tries to explain the relationship between religion and culture. Notably, Morgan uses sacred objects used by the Buddhist religion for meditation purposes. Sacred objects used include an image, reciting a mantra, and concentration on breathing (Morgan 2014). Morgan uses a different approach from Nye as his argument is based on the paradigm of art about culture. In his journey to understand world religions he keens on the need to have a critical analysis of the various images. the value of theoretical reflection should be measured; finally, by the contribution, it takes to illuminate the actual objects of study: the visually of religion (Morgan 2014). To achieve this, Morgan uses multiple chapters to reveal to his readers how visual theories can help one to have a distinct worldview on the many religions. Morgan highlights a case where traditional religious men used sacred images to communicate with the Supreme Being, the unseen, mysterious, and potentially uncontrollable forces that are understood to govern life (Morgan 2014). To back up his argument, he gives an example of Buddhists in Thailand who had a closes interaction with many statues as their way to communication with their god. He also explains the multiple religions that were seen to invoke certain sacred spiritual forces especially in West Africa and Eastern Orthodox. Iconoclasm is a topic of consideration based on Morgan’s argument which is linked to idolatry about culture. The argument cuts across both geographical and historical aspects which makes the one has an idea of iconoclasm. This argument suits the American societies as a reflection of some of the activities on hand in the context of social, economic and political aspects. Morgan highlights specific ideas that could be used to determine the extent to which the book and other articles serve their purposes. Unless scholars can show that they learn something more about religion, by comprehending how it happens visually. The visual culture of religion has little to recommend it as a field or method of study (Morgan 2014). The art of images has a positive impact on several lives of individuals changing their worldview concerning social-religious aspects. In the conclusion of his claim he mentions that religion and culture are essentially inseparable, and one can’t understand the plethora of religious practices without using the art of images.Ultimately, religion and culture are closely related areas of human life which seem inseparable yet extremely specific. There is a symbiotic relationship between the two they both tend to rely on one another. Religion is culture based, and culture cannot be practiced in the absence of religion, they must exist together. As discussed, various theology experts have shown an interest in explaining the relationship between culture and religion. To understand religion and culture, there is a need to appreciate the things that are sacred. Although both authors Nye and Morgan really don’t talk about what exactly is holy, they have tried to link their arguments on a variety of sacred religious aspects.

Religion and Culture Religion is one of the topics of the most. (2019, Aug 20). Retrieved from http://studymoose.com/religion-and-culture-religion-is-one-of-the-topics-of-the-most-essay 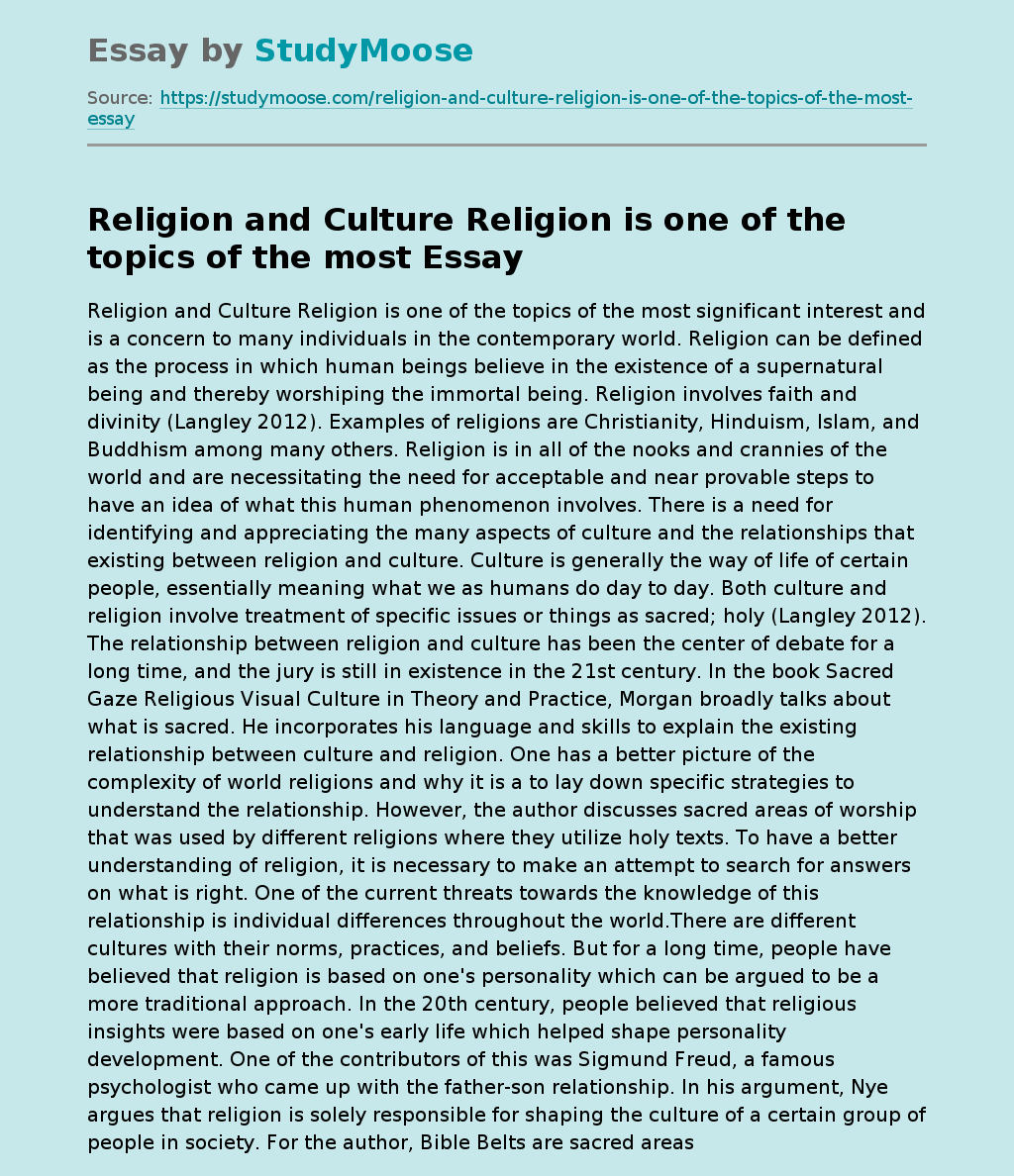