How Could Religion Cause Violence Religion?

How could religion cause violence? Almost all religions around the world are based on love, peace and order. They all have certain rules and principles that hold love, peace, and order together within a society, but as the widely known saying states: “Rules are meant to be broken;” many people twist and misinterpret the sacred texts like the Bible, the Quran, the Torah, etc. Even though religions around the world are considered to be peaceful and harmless, still every single religion in the world and its texts have been misunderstood or misinterpreted.

Don't use plagiarized sources. Get your custom essay on
“ How Could Religion Cause Violence Religion? ”
Get custom paper
NEW! smart matching with writer

The results of this are motivation and justification for violence. This essay will explore the various causes for violence in the religions around the world, and it will closely discuss that violence is, in fact, caused by the people who practice religion, instead of religion itself, influenced by other factors outside of it.

Religion does posses a potential for extremism because it deals with extreme things. People can compromise with small disputes over borders and territory, but people cannot compromise with the will of God since it is absolute.

However, religion should be based on love, but it can quickly be transformed into the opposite-hatred. It is the same as the passionate love between a man and a woman can be transformed into murderous jealousy. Often enough religion has been viewed as the prime suspect for violence between ethnic groups or within them. Religion can cause violence by misinterpretation of the messages that the sacred texts are supposed to send, and a lot of the sacred texts are, in fact, misinterpreted and because of that, “extremists” find inspiration and justification that it is in their religion that they have to exercise violence upon others (Hitchcock).

A lot of the ancient and modern, major conflicts are considered to be connected to religion in some way. Any religion can be used as an excuse for violence. For example, The Crusade Wars resulted in a lot of bloodshed on both Christian and Muslim sides of the mass conflict. Jews have committed genocide over nations for the sole reason to fulfill their cause. The war in 1991 in Yugoslavia pitted Catholic, Orthodox Christians, and Muslims against each other in a very bloody war. Violence in religion even exceeds conflicts between different ethnic groups; it also happens within the same ethnic groups. In Burma, thousands of monks are being tortured and executed. Also during the Christian Reformation thousands of people were killed because of their religious beliefs. All of the followers of these religions believed that they were doing the right thing by going to war to protect their religion, “eradicate the heretics or non believers,” or to gain control over the holy land (Hopfe).

On the contrary, every religion in the world is a peaceful one. In not one single religion that exists or existed, in both past and present, preaches violence to solutions of existential problems. In every single one of the sacred texts, the Torah, the Quran, the Bible, the Theravada’s and all the others, there are principles and rules that require people to abide by them. These principles forbid murder, stealing, or doing any harm to any human, and sometimes any other being in the world. They are based on justice and impartiality, they don’t tolerate terrorism or any other kind of extremism, in fact, they condemn it.

In all of the examples that were stated above, it would seem that religious beliefs of people are the reason for major conflicts and various violent acts. That is not the case; in fact, the true reasons violence ever happens are economic, political, and even ethnic disputes. Even in the cultures that religion plays a vital part of everyday life there is nothing like a pure religious conflict. There is always some other outside factors involved. It could never be, and it never has been broad enough to cause terrorism or any kind of extreme violence. People only use religion as a justification for a violence rhetoric or behavior (Cline). For example, economics play a major role in conflicts that are attributed to religion. Many soldiers that fought in the crusades went for the wealth they would acquire from all the plundering they would do, aside from liberating the holy land from the Muslims. The Muslims, on the other hand, they can also be seen fighting for the economic perspective. They fought to preserve their recently conquered land, to protect and harvest the resources from it and collect taxes from the people that live there. So if the sole reason people go into these conflicts is their economic gain, than when the economic factor is taken out of the equation, people won’t have anything to conflict about; the justification would be removed. So this same example should be considered for religion also. Even if religion is not the factor, it could still be called a religious conflict, if justifications are provided by religion. “The existence of other factors means that the removal of religion might not end the conflict, but the removal of the primary justifications and explanations would have to make significant changes in how the conflict is understood and pursued, not to mention its ultimate goals” (Cline). This means that religion is only the justification for a conflict, and when religion is removed from a conflict the real reasons are exposed; the reasons like hatred and greed for power and wealth. In fact, just because a lot of the people who engage in violence, like warfare and terrorism in the world happen to be religious, or claim any kind of religion and religious doctrines as their reasons for acting, doesn’t necessarily mean that religion caused them to do those things. Indeed, for every violent religious extremist, there are many more people living peacefully aside from them who exercise their same beliefs but just choose to act in a different way. For example, for every violent Al Qaida Muslim terrorist in the world, there are many more innocent, Muslim people simply trying to go about their lives, and if they sympathize with Al Qaida, they are not agreeing with any violent extreme, which makes a huge difference in perspective. What about people that say that they act in accordance with their religion and “wage holy wars?” Even if the people believe that statement, the religious doctrine itself is not the cause of violence; instead, the person that acts with that justification is the cause of violence. People wage wars, religions do not. They simply use it as a tool to bring and unite others so they can achieve their personal, egoistic goals. In other words, religion is being used as an excuse by “holy warriors” that do not tolerate other religions. If they understand any kind of free will or the concept of human individualism, than they will realize that it is not the doctrine, rhetoric or the religion, but it is the individual that is responsible for his or her own actions (Newell).

Although religion is still considered to preach peace and love, some of the messages religion sends are misinterpreted by individuals, which is the cause of violence. The biggest reason violence is connected to religion is because individuals that are driven by greed and hatred towards other religions, twist the views of a particular religion, and present their deferred standpoint to others, so by involving God or any other supreme being they would get more followers. It is not the religion or the belief itself, but it is the actions of the individual that cause mass damage and violence between people. “If perhaps people actually lived the good principles and not the interpretations of the principles of religion like charity, forgiveness, and personal accountability, the world might, it just might be a better place” (Newell).

How Could Religion Cause Violence Religion?. (2019, Aug 19). Retrieved from http://studymoose.com/how-could-religion-cause-violence-religion-essay 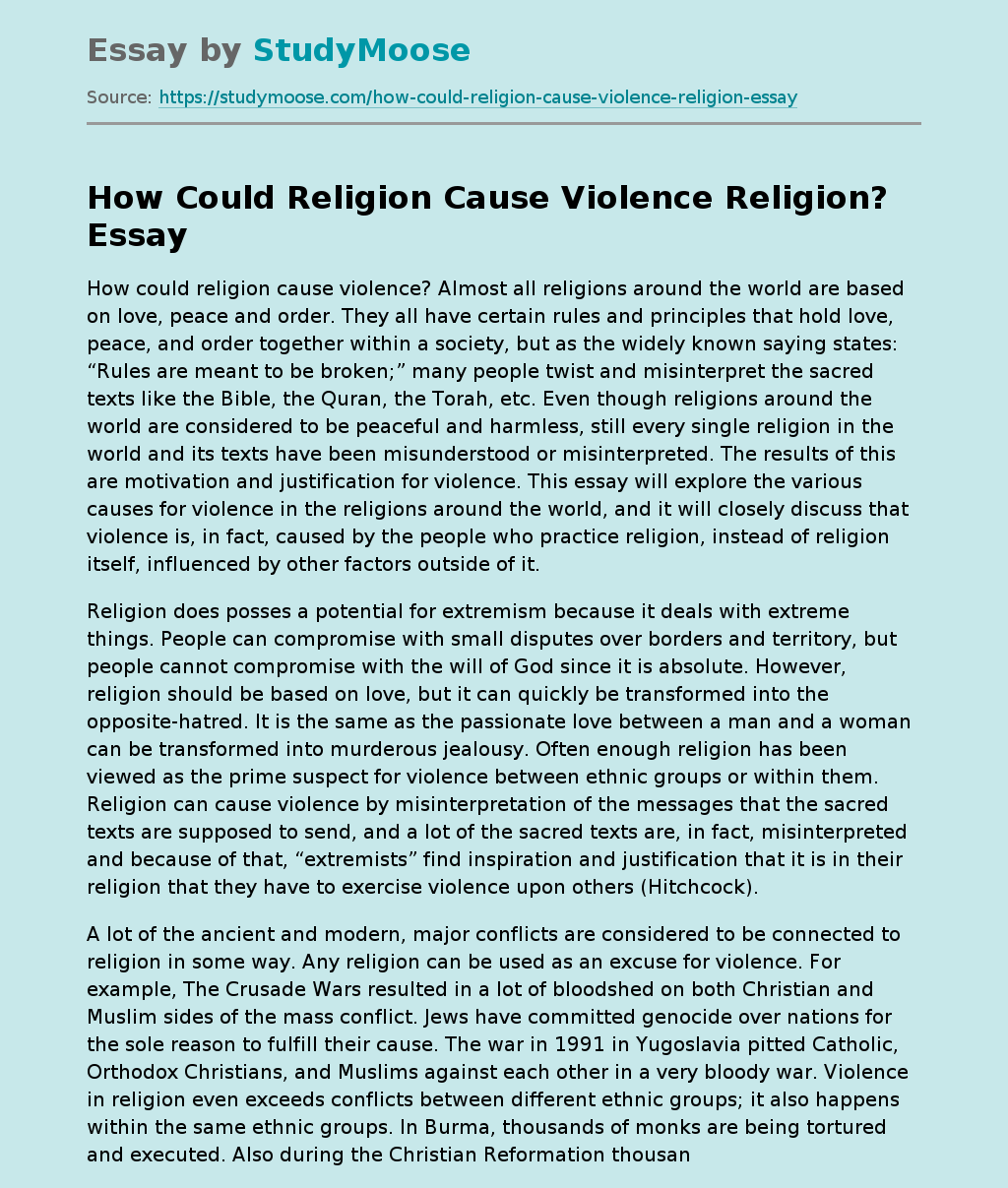