To what extent could the Cold War have been avoided?

It could be argued how realistic it is to claim that for some given reasons the Cold War could have been avoided; what is sure is that if there are were any major events that if avoided, would have evaded the creation of the cold war these are numerous. Now I want you to reread this and ask yourself if it’s easily understood. Some of the foremost events that could be taken into consideration are Churchill’s Iron Speech and Truman’s 1947 address to congress.

Don't use plagiarized sources.
Get Your Custom Essay on To what extent could the Cold War have been avoided? Just from $13,9/Page

However, in a wider context, ideological reasons were at the origin of the Cold War, and thus a peaceful coexistence of different ideologies could have been the key to avoiding the Cold War.

With his ‘Iron Curtain’ speech at Westminster College in Fulton, Missouri on March 5, 1946, Winston Churchill made it obvious to the whole world that there was an increasing tension between groups of nations with different ideologies and political systems. The existing rivalry between the Eastern Bloc and its allies and the US and its allies was further developed with Churchill’s speech that declared the ‘Cold War’.

If one supposes that (in an ideological world) Churchill did not deliver the ‘Iron Curtain’ speech in 1946, one could argue if the events that followed it would have been the same, and if the Cold War itself would have existed or at least would have taken place. However, considering that rivalry between Capitalist and Communist states always existed, it could be thought that Churchill’s speech was only the process needed to start the implementation of an officially declared rivalry, which would have leaded to a war.

President Harry S. Truman stressed in his address to congress in March 1947 that the United States of America would combat totalitarian regimes around the World so that all countries could be masters of their own faith. Suspecting that some countries were threatened by possible communist insurrections, in his March 12, 1947, the late stated that financial aid would be given to Greece and Turkey ($40 million). Nevertheless, the opponents viewed this as a technique to avoid the spread of communism, and not as an altruistic act. With Truman’s actions the ideals of isolationism that ruled American foreign policy for decades faded. Moreover, by involving the US into issues of overseas countries (particularly those neighboring Russia) Truman greatly provoked the Soviets that replied by taking over the countries of Eastern Europe one by one (salami tactics: slice by slice). Thereby, the Truman doctrine and more generally Truman’s foreign policy was in the roots of the cold War conflict and if it was not created the Cold War could have been avoided. However, according to the US government at the period, the Truman Doctrine did only consolidate the conflict as the Soviets were already spreading communism.

Furthermore, as the strength of different nations vary and as the geographical relationship that they have with each other is not the same and that for ideological reasons some of these nations fail to accept the status (power) of other nations it is obvious that the previous will have a different degree of hostility towards others than the late to enhance their security by forming clusters of states (e.g.: the USSR). That said communism spreads to be able to compete with capitalism. However, some states were not willing to become communist, but were forced to do so; these states were the ones that gave the US a pretext to start a ‘Cold War’ against communism. Thereby, for selfish and nationalistic reasons from the Soviet part, the ‘Cold War’ was enhanced not to say that they were at its origin. However, the US is likewise to blame, since it got involved to overseas countries problems to a very large and unnecessary scale.

As a conclusion, theoretically, the Cold War could have been avoided if some chief events such as the Iron Curtain speech did not take place and if the countries that were involved in the series of conflicts during the period could coexist more peacefully, and accept the other’s ideals. However, realistically speaking, the ideologies conflicting the super powers were very strongly opposed, and it was therefore difficult for them to accept each other.

To what extent could the Cold War have been avoided?. (2016, Jul 19). Retrieved from https://studymoose.com/to-what-extent-could-the-cold-war-have-been-avoided-essay 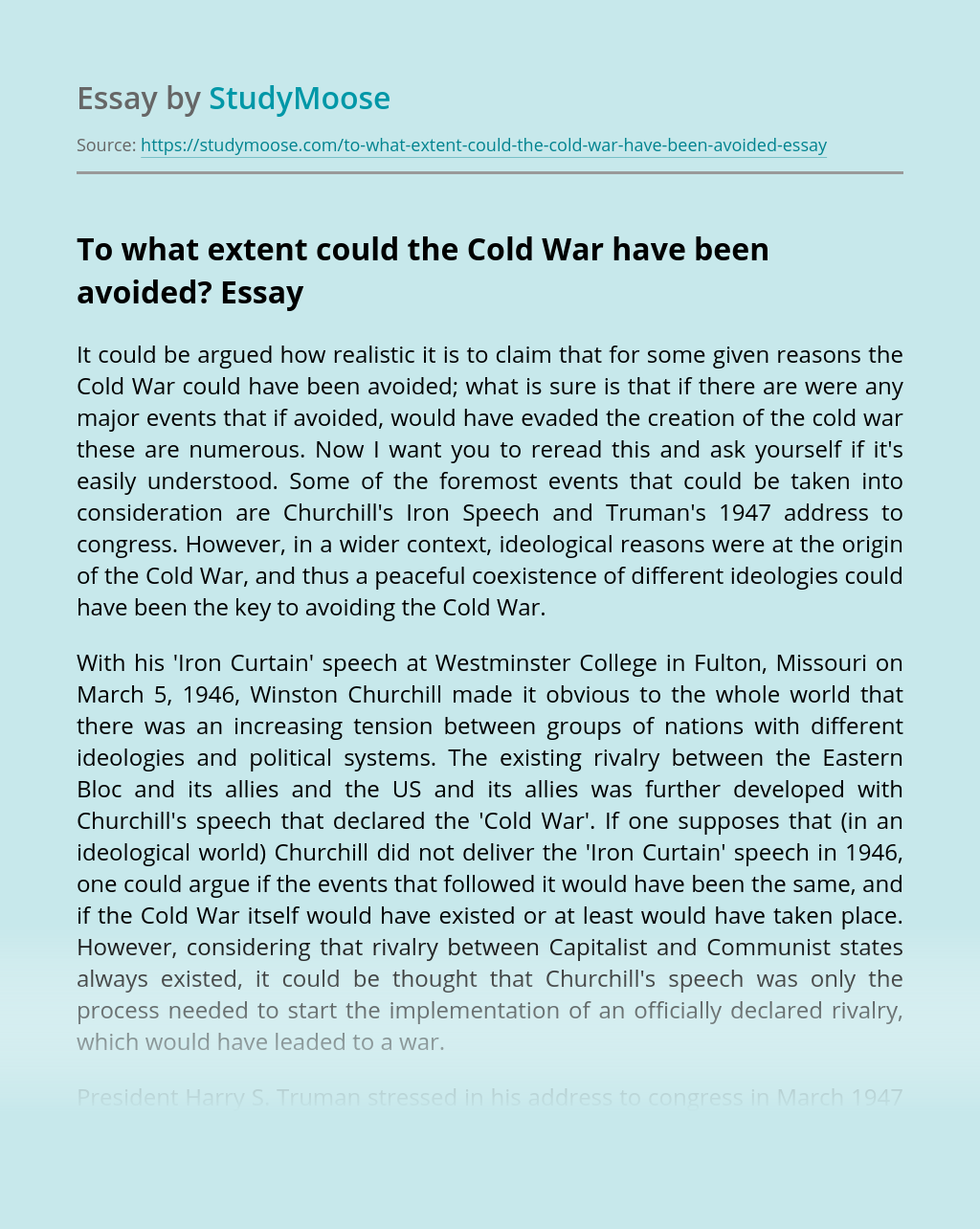 View sample
Go Global- or No?

Executive Summary DataClear, a US based company within its two years of operations since 1998 has occupied a dominant position in the data analysis market of US by serving telecommunications industry and financial service providers. The company feels threatened by the VisiDat’s upcoming data analysis package with the global targets. CEO, Greg McNally and other...

Strengths, Weaknesses, Opportunities and Threats in a health care environment. SWOT – for management, mentoring and nursing Hospital nursing swot analysisA SWOT analysis is a tool that can provide prompts to the managers, clinical leads, nurse tutors, nurse mentors and staff involved in the analysis of what is effective and less effective in clinical systems...

View sample
A Study on Impact of Fdi on Service Sector

The study aims to analyze the growth dynamics of the FDI. It intends to see whether the growth in FDI has any significant impact on the service sector growth and also investigates whether a growth in this sector causes the GDP to grow, also analyzes the significance of the FDI Inflows in Indian service sector....

Cross-Cultural CommunicationMiraaj Sripal1205301New York Institute of TechnologyDate: Mar 26, 2019Culture is the pattern of taken-for-granted assumptions about how a given collection of people should think, act, and feel as they go about their daily affairs-Joynt & Warner, 1996In modern-day changing business situation increasing number of firms extends their business overseas. Effective communication with people of...