Analysis of “Where Are You Going, Where Have You Been?”

Categories: Joyce Carol OatesWhere are you going where have you been
Download paper
Download
Analysis, Pages 6 (1447 words)
Views
67

In her short story, “Where Are You Going, Where Have You Been?” Joyce Carol Oates tells a rather disturbing tale of a vain teenaged girl and a mysterious man. This narrative truly showcases Oates’s brilliant writing style and the characters in this work are deeply fascinating. All the main characters in this short story represent something more than they appear at surface level and the interpretations of these characters by literary scholars vary greatly. The characters and what they mean are the most important part of this story.

Don't use plagiarized sources. Get your custom essay on
“ Analysis of “Where Are You Going, Where Have You Been?” ”
Get custom paper
NEW! smart matching with writer

Connie and her family are a bit ordinary, but they are easily relatable characters. In contrast, Arnold and Ellie are strange and dangerous depictions of dark forces. From young Connie and the older strangers Arnold and Ellie to Oates’s dreamy storytelling there is a lot to discuss.

Oates hooks us into her story by introducing us to Connie, a self-involved fifteen-year-old who is spending her summer chasing boys and listening to music.

She seems to have issues with all her family members for one reason or another. Connie and her friend meet some boys at a restaurant when she spots Arnold Friend for the first time in a parking lot. She forgets about both him and his strange car until later. Then, one Sunday afternoon, her family leaves to go to a picnic and Connie stays home to wash her hair and listen to music. While she is listening to the radio Arnold and his friend Ellie Oscar show up at her house.

The combination of Arnold’s strange appearance, his age, and his creepily-intimate knowledge of Connie and her family frightens our main character. He tries in many different ways to lure her outside until eventually Arnold gains seemingly complete control over the girl, rendering her helpless. The story ends with Connie leaving the protection of her home and going with Arnold- ostensibly against her will. The story when taken at face-value might seem like realistic fiction but with closer inspection the events are probably just a part of Connie’s nightmare. When we are first introduced to Connie, it quickly becomes obvious that she is immature.

This character was not written as one who was wise beyond her years, like a lot of stories portray their heroines. Instead, she pretends to be more mature than she really is. The lack of parental interest in Connie’s life allows her to roam freely without any real structure which leads to her feeling more independent than she actually is. In the story’s setting of mid-century suburbia, we see that the youth is heavily influenced by pop-culture and music, and Connie is no exception. “Popular culture plays an important role in shaping Connie’s consciousness and in creating her idea of romantic love as idealistically sweet and gentle; this hope is ultimately destroyed by Friend” (LitFinder). Connie is obsessed with music, and it saturates everything in the story. Her love for music might even be her undoing, because it seems as though music is the weapon Arnold and Ellie use to control her. ‘In ‘Where Are You Going, Where Have You Been?’ a satyr does come into the city, in the form of Arnold Friend’ (Easterly). Joan Easterly believes that the unusual Arnold Friend is actually a satyr in disguise.

Oates gives many clues that this could be the case. His unusual appearance might be hiding several bits of demi-god anatomy from a wig covering his horns to his ill-fitting boots that might be secretly housing hooves. Naïve Connie might not fully understand the extent of Arnold’s deception. She seems to think he is only an older man pretending to be young but if he is actually a mythological creature he is far more dangerous. His complete and unnatural control over Connie is a lot easier to explain if you think he is a supernatural being. However, many people believe that he is just a representation of Charles Schmid, a murderer that somehow lured teenaged girls to their deaths during the same time period as this story. While it is likely that he represents a satyr, without a direct statement from Oates as to who Arnold represents, he is open for interpretation. As Easterly puts it, “The interpretations of Arnold Friend are complex and diverse, a tribute to Oates’s skill in creating allusive patterns, but the shadow of a satyr, flute in hand, lurks behind them all.” Arnold Friend and Connie are not the only characters in this story that critics have dissected. Arnold’s partner-in-crime Ellie Oscar has drawn the attention of many scholars as well. According to Alice Hall Petry, he is a representation of The King. She describes him as ‘a character whose appearance, personality, and behavior suggest he is the incarnation of the admitted idol of Friend’s prototype: Elvis Presley.’ If you picture the character’s hair, sideburns, and clothes- chances are you’re just picturing Elvis. It also seems impossible for this character to exist without music, as it’s always following him and Arnold. His and Arnold’s music seem to be the most important part of the spell they have over Connie, and Ellie plays a big part in charming her with it- even turning up the radio in the car while Arnold is attempting to lure Connie outside. “As with Elvis, Ellie projects an ambivalent sexual/motivational message which leaves his intended victim- a sexually mature but inexperienced adolescent girl- unsure of whether to perceive him as innocuous or sinister…” (Petry). There is a more sinister interpretation of Ellie though that is quite popular. He could also be a satyr alongside Arnold. It is strange and threatening that this character is silent except when he offers to help his friend by pulling out Connie’s telephone. And as Easterly says, “several critics have noted, however, that these two men probably killed the old woman who lived down the road from Connie, and the threats to Connie’s family are direct.” It seems as though Ellie Oscar might be more dangerous than just a caricature of a dead rock star. While Connie’s family are not quite as interesting as Arnold and Ellie, they are still important to the story.

One thing we know for certain about Connie’s family is that she isn’t really very close with them. As far as we can tell, our young protagonist has the worst relationship with her mother. In fact, other than a rocky marriage that’s about all we know about her- that she picks on her daughter and Connie doesn’t like her all that much. She seems to be the formally-beautiful archetypal domestic woman from what we gather from the story. Connie’s mother often compares her to her older sister June, who is a dowdy girl that works at her sister’s school. There is probably a lot of resentment between the two sisters since Connie is prettier, but her sister is portrayed as a dependable professional and is preferred by their mother. Connie’s father is not really a participating member of the family, he appears to only read his newspaper and avoid his wife and daughters. His lack of involvement is really the only remarkable thing about his character. We may not see many examples of affection from Connie towards her family, but it is important to note that when her family was threatened Connie sacrificed herself to save them- that’s one interpretation at least. It could also be interpreted that she had no control over herself with Arnold. Many scholars think that the story was all Connie’s nightmare. In “Impure realism: Joyce Carol Oates’s ‘Where Are You Going, Where Have You Been?’” D.F. Hurley claims that “Oates’s story violates one of the ‘rules’ of dream vision or nightmare fiction: she does not complete the pattern by reawakening the dreamer to his/her old reality.” The story ends before we find out for sure if Connie was dreaming her encounter with Friend and Oscar. According to Hurley, “the struggle between a nightmare and a nightmarish imitation of reality is not just Connie’s but the reader’s too.” In closing, Oates’s allegorical style of writing lends to many different interpretations of the characters in “Where Are You Going, Where Have You Been?”

Connie is a stereotypical teenaged girl preoccupied with her appearance, love and music. Arnold is a personified representation of a mythological demigod and his friend Ellie represents either the King of rock and roll or another dark creature like Arnold. No matter how you understand the characters, they really are the heart of this story.

Analysis of “Where Are You Going, Where Have You Been?”. (2021, Aug 02). Retrieved from https://studymoose.com/analysis-of-where-are-you-going-where-have-you-been-essay 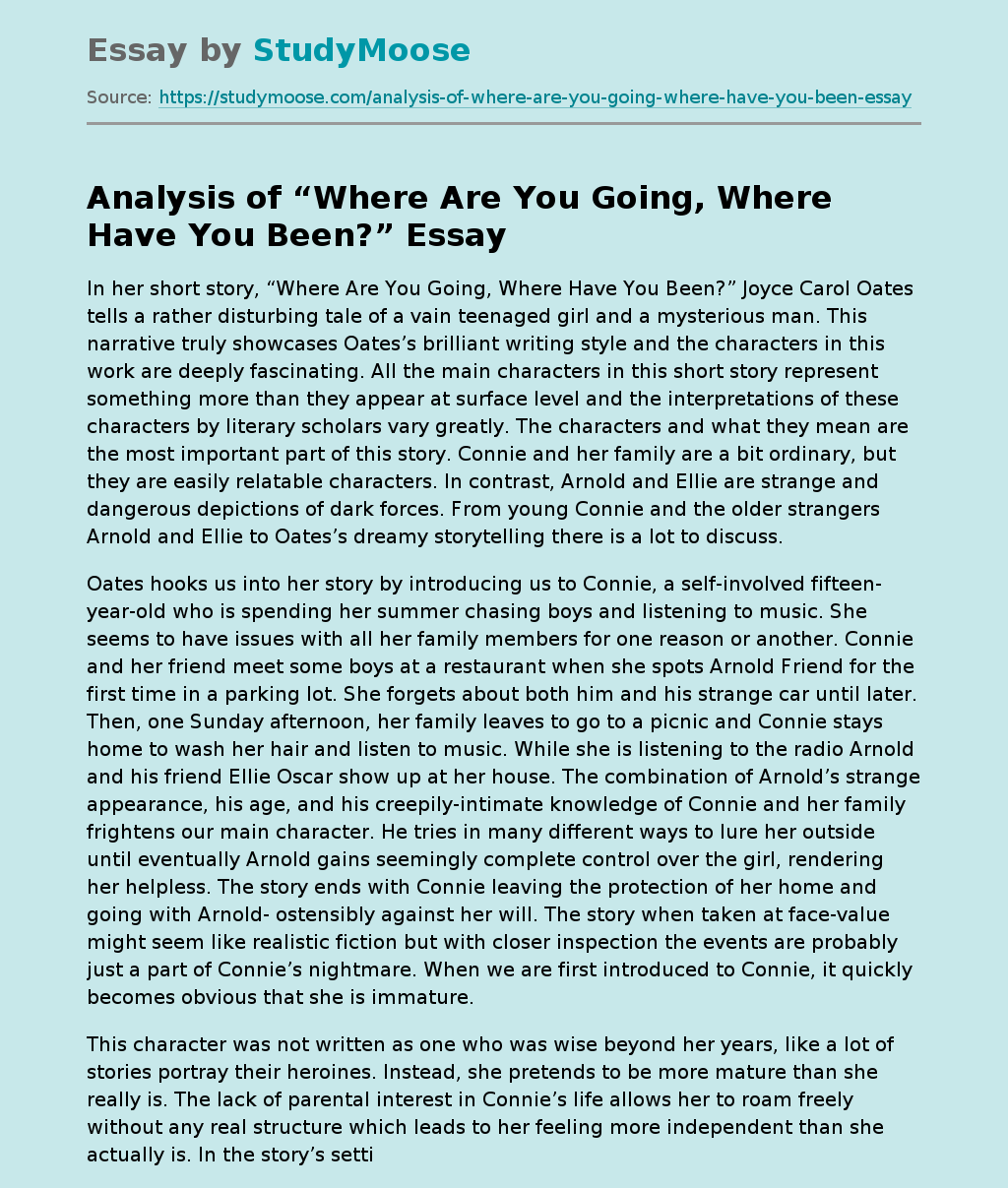