Why did Plato think women could be legitimate political Guardians?

Thus, though he asserts that women in general are not as capable as men in general, especially in physical strength, individual members of both sexes will be capable of performing all the functions needed by the city, including guardianship and philosophy. The only way to ensure that persons are assigned the jobs for which they are best suited is to asses the merits of each, independently of sex (gender)’. 4 The three primary types of desires are divided into a hierarchy of classes from the philosopher king, the auxiliaries and the workers.

Don't use plagiarized sources. Get your custom essay on
“ Why did Plato think women could be legitimate political Guardians? ”
Get custom paper
NEW! smart matching with writer

Those that are ruled by the desire of money are divided into the class of the workers and their function is to satisfy the economic needs of the state. Plato was not however promoting women to be workers, which seems contradictory to the fact that it was efficient and just to make use of all the resources, but he only focuses on women becoming political Guardians. Political Guardians consisted of ‘wisdom-lovers’ and ‘honour lovers’.

If women were naturally more suited to pursue wisdom or honour then they should be legitimate political Guardians.

Those that love knowledge have a desire to pursue the truth. They are naturally more intellectual, rational and contemplative. Society was to be governed by philosophers who knew the truth. Power was to remain in the hands of those properly capable of wielding it and if women were properly capable of wielding this power, then they could be entitled to this power. People ruled by different desires have very different conceptions of what is ‘good’ or what can bring ‘happiness’.

Plato believed the desire for satisfying ones own interests is what causes immorality.

In order for justice to exist in a society, people’s appetites needed to be controlled in by the guardians, who would know what is best for individuals. People should act in the interests of the Polis as a whole, not for selfish or individual interests. The Auxiliaries have a more spirited and fierce quality so should be trained in the art of fighting to establish an effective military. Plato reasons that the passionate and spirited desire honour and approval. Women were also considered by Plato to be suited to become auxiliaries if they were trained in the same way as men.

Plato thought women could be political Guardians if they were educated and trained in the same way as men and therefore developed the same qualities, then they could be legitimate political Guardians. Plato viewed the state an educational tool to nurture, nourish and develop individual behaviour. People cannot be forced to be good and excellent but must be taught in a way that brings out the individual’s distinct qualities. Teaching is a process, not something inflicted upon the individual and women were entitled to be taken through this process.

‘To make a woman into a Guardian we presumably need the same education as we need to make man into one, especially as it will operate on the same nature in both. ‘ (456c-d) ‘It is not unnatural that our Guardians’ wives should share their intellectual and physical training. ‘ (456b) The female watchdog could share the duties with the male watchdog if it is brought up and trained in the same way. Women are to be trained in the same way as men, physically and mentally. Plato does not view female physical differences grounds for disqualifying women from being trained as Guardians.

Although women should share all duties, Plato does reason that, ‘we should treat the females as weaker, the males as stronger. ‘ (451e. ) However, he still states that ‘if we are going to use men and women for the same purposes, we must teach them the same things. ‘ Plato seems to adopt the practice of Sparta whose girls were trained in gymnastics like the man. Plato extends this idea insisting that since women have been trained like men, they should serve the state like men. Thus, the women would be trained physically and mentally, even becoming trained in war.

‘Having seen that the arrangement is possible, we must also see that it is best. Cleary it is, because the system of education thus established makes people better, and makes the guardians the best of all citizens. All that the present suggestion adds is that the class of Guardians includes the best possible women as well as the best possible men. ‘ (456c-557a) Plato believed that power could be wielded wisely and for the good of the community, provided those who have the power are brought up correctly.

Women could be legitimate political Guardians and wield power wisely for the good of the community if they were educated and trained in the same way as men. The theory of the forms explains how Plato reasoned that women could become legitimate political Guardians. Plato’s theory of the forms demonstrates that only those who have a love of knowledge are able to perceive true reality. The forms are eternal, perfect, invisible and unchangeable, whereas the world of the senses is temporal and changing. Plato reasons that in order to create the ‘good’, ‘best’, and ‘just’ state philosopher kings will need to rule.

Philosopher kings are to unite political power and authority with a philosophical knowledge of the transcendent unchanging form of the good. By looking to the form of the good, of which he alone has knowledge, the philosopher discovers the true blueprint for the best human world. Plato’s theory of the forms revealed that only those who can escape the chains in the darkness of the cave and are able to see the sun are able to rule. Only the philosophers are able to have knowledge of the forms. As they know the true reality, it only these people who have wisdom to lead.

They pursue knowledge and reason, not greed and hope to help others to come out of the cave and into the true reality. Plato believed that the ideal state could be achieved through the Socratic method of reasoning to find the truth. ‘Plato to Nato’ states that, ‘The essential requirement is that our souls and our actions should be governed by reason, since reason alone is capable of determining what is truly good for us. ‘5 It is only through a process of education that individuals will be able to perceive knowledge of the forms and escape from the darkness of the cave.

Philosophers were to rule by having knowledge of the truth so if women were able to pursue the truth, they too should be Guardians. A fundamental goal of ethical or political education in the kallipolis is to train and socialise individuals’ desires, turning them around from what they falsely believe to be true happiness to the pursuit of true happiness, the form of the good. Plato primarily thought women could be legitimate guardians for the benefit of the state. Julia Annas states, ‘it is quite wrong to think of Plato as the first feminist.

‘6 Plato reasons that women should be educated in the same way as men if they have the natural abilities that a Guardian requires. However this must not be misunderstood that he was a promoter of women’s rights but that he merely promoted what was the most efficient and ideal for the state as a whole. “Some have thought as Plato as the first feminist, because he sees no reason why women should be barred from the activities that men do, while others have seen him in a deeply anti-feminist strain, holding that women are worth thinking about only to the extent that they can be socially reconstructed as men.

“7 Plato’s dialogues do not discuss women’s rights or worth to society in general but he does make an assertion radical for a time when women were merely at the disposal of the husbands, that women could be legitimate political guardians based on their abilities to fulfil the task. Nonetheless the argument is not based on and makes no reference to women’s needs or desires. However Plato’s ideal state is not based even on man’s individual needs or desires as a state is arranged for the common good.

The system of communal living is the best possible one because it produces the highest degree of unity in a state. Happiness is the optimal satisfaction of real interests in the long-term. According to the principle of specialisation, each person, including the women have their ruling desires satisfied throughout life. Thus each develops his real interests, and is made really happy. Plato’s proposals that women should share the same way of life are revolutionary and extremely liberal as Athenian women in Plato’s time led suppressed and powerless lives.

However these proposals do not extend to the women of the producer class, highlighting that they were based on efficiency, not equality. He does not attempt to improve their lives, as they cannot make a significant contribution to the common good. Plato asks rhetorically, ‘do you know of any human pursuit in which men do not greatly excel women in all these qualities? ‘ A response was that ‘men are better equipped mentally and physically, and can beat women in all fields’ (455a), not a response of someone aiming to promote the equality of women with men.

Plato was primarily concerned with women in relation to whether they could legitimately become political Guardians. His philosophies were destructive to the family,” as in his ideally governed society the nuclear family would either be abolished or severely limited. “8 In the analogy of the watchdogs the reason for the female watchdog sharing in the same duties is to prevent the whole burden of the care of the flock falling on the male, rather than to liberate the female form an unequal role. Thus it would benefit the state as a whole if women participated.

In conclusion, Plato reasoned that if women could be trained in the same way that men were trained to be Guardians and were as effective, then despite natural differences women should be legitimately able to become a political guardian. There was no reason to differentiate between the sexes if they could fulfil the same roles.

Why did Plato think women could be legitimate political Guardians?. (2020, Jun 02). Retrieved from https://studymoose.com/plato-think-women-legitimate-political-guardians-11286-new-essay 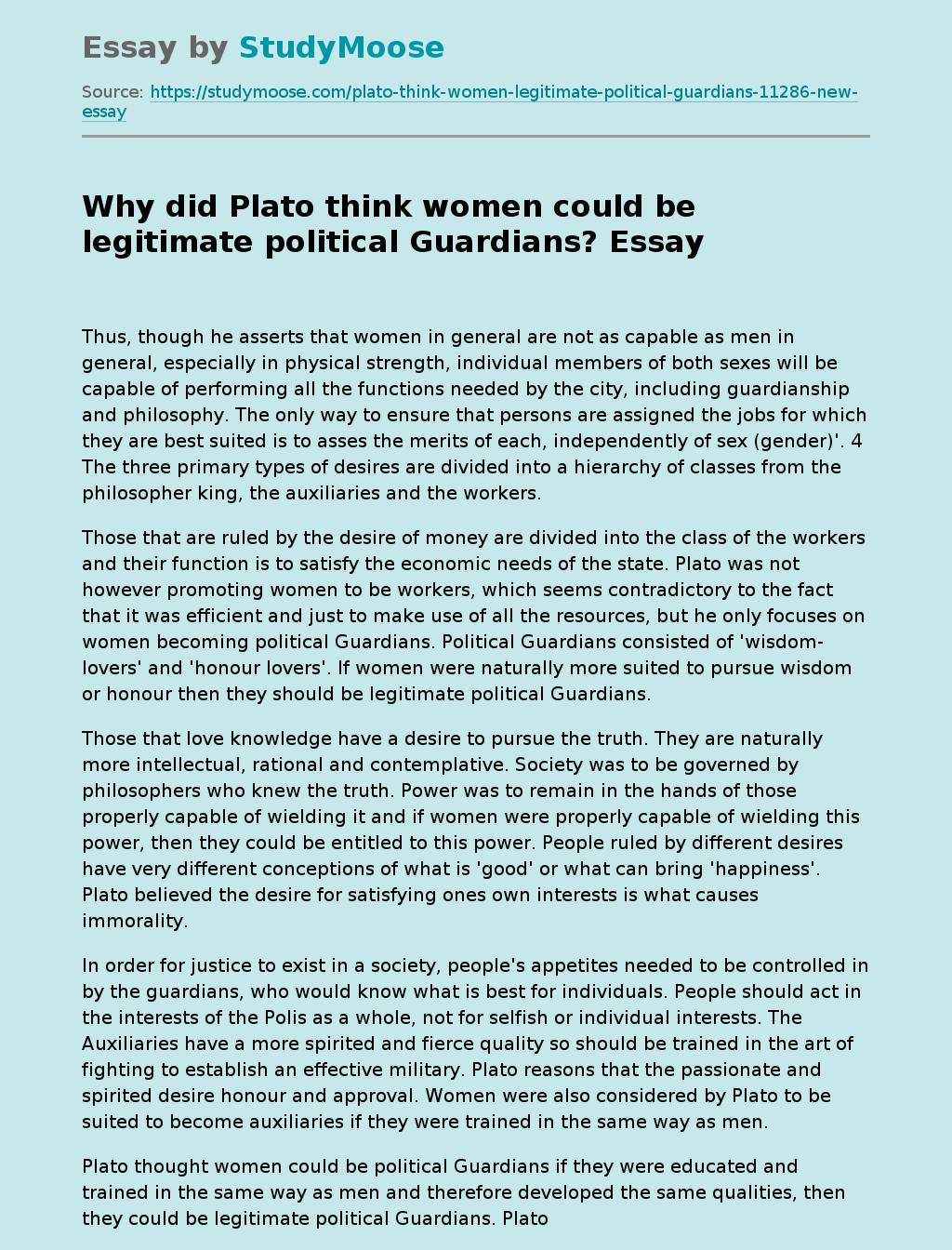