If Beale Street Could Talk: The Story of Love and Endurance

The topics of racial injustice and ethnic discrimination are extremely popular in literature. Writers of fiction exploit these topics, to shed the light on the difficulties a black person faces in contemporary America. James Baldwin’s If Beale Street Could Talk is considered by critics as a brilliant representation of the racial and ethnic tensions in the American society. However, despite the profound racial implications, this book is primarily a love story.

Don't use plagiarized sources. Get your custom essay on
“ If Beale Street Could Talk: The Story of Love and Endurance ”
Get custom paper
NEW! smart matching with writer

Fonny and Tish are separated by the injustice and racial bias that are so characteristic of the American criminal justice system. However, not the injustice and racial bias but the pain and sufferings of a loving man and a loving woman shape the foreground of Baldwin’s story: “I always remember now, because he’s in jail and I love his eyes and every time I see him I’m afraid I’ll never see him again. So I pick up the phone as soon as I get there and I just hold it and I keep looking up at him.

[…] I hope that nobody has ever had to look at anybody they love through glass” (Baldwin 4).

The fact of Fonny’s being falsely accused of rape is just a minor part of Tish’s personal experiences. Tish fights to release Fonny from prison not because she wants to prove the unfairness of the racial relationships in her society, but because she truly loves her man and wants to spend her life with him. The baby in Tish’s belly adds stimuli to her individual fight for happiness and turns Baldwin’s book into a story of love that can survive the most unbelievable hardships. Baldwin’s book is the story about love that evolves over Tish and Fonny’s lifespan.

Tish’s memories bring the reader back to her infant and school years: her first encounter with Fonny, her experiences and perceptions about his personality, the development of their feelings toward each other, and the first understanding that they were meant to be together. “I thought of Fonny’s touch, of Fonny, in my arms, his breath, his touch, his odor, his weight, that terrible and beautiful presence riding into me and his breath being snarled, as if by a golden thread, deeper in his throat as he rode…” (Baldwin 35).

The way Baldwin describes Tish and Fonny creates a sense of a never ending happiness, which happens only once in a lifetime. Through the prism of her memories and experiences, Tish cannot but recognize the wonder of her own and Fonny’s feelings. She cannot but admit that “it’s a miracle to realize that somebody loves you” (Baldwin 36). Even if any racial and ethical dilemmas poison their lives, they are overshadowed and die away against the connectedness of their souls and spiritual beings.

In the context of Baldwin’s story, racial discrimination and bias are useful only to the extent that emphasizes the miraculous nature of the relationship between Tish and Fonny. This relationship is equally complicated and perfect. Nothing can break their love. The future baby is, probably, the culmination of their feelings toward each other: “Love had sent it, spinning out of us, to us. […] Something in me sang and hummed and then I felt the deadly morning sickness…” (Baldwin 41).

These are the realities in the lives of any two people, who love each other and who, regardless of the social and racial difficulties, turn this love into the strongest stimulus in their movement to the ultimate happiness. Baldwin’s If Beale Street Could Talk is a complex example of a love story, in which two people who are deeply connected to each other successfully pass a difficult test to their feelings and commitments. Fonny’s arrest and imprisonment is the first serious separation in the life of Tish. Tish feels the threat of losing Fonny.

She is not afraid of loneliness, but she is afraid of losing her beloved man forever. She remembers the best moments of their relationship, and these memories give her strength to move forward and bring Fonny back home: “You know, that I’ve always been yours, right? – I said, ‘I never thought about it that way’. He said, ‘Think about it now, Tish. ’ ‘I just know that I love you’, I said, and I started to cry” (Baldwin 63). Love gives Tish trust and endurance; she is full of confidence that she will be able to win this fight against the injustice.

In her talk to Victoria, Tish once again says that she knows Fonny is not guilty. Her argument is simple: she has known him all his life (Baldwin 141). Not the striving to change the society’s beliefs about race, but Tish’s true love and commitment to Fonny move her to the victory. In a similar vein, love is the only source of hope for Fonny: “Baby. Baby. Baby. I love you. And I’m going to build us a table and a whole lot of folks going to be eating off it for a long, long time to come” (Baldwin 163). With their love, as well as the hope and faith born out of their love, Tish and Fonny successfully pass the test of separation.

Nothing but love supports them on their way to each other. James Baldwin’s book is a triumph of the sincere human feelings, which can successfully break the racial, social and injustice barriers in the way to never ending happiness. Conclusion James Baldwin’s If Beale Street Could Talk is often considered as the bright description of American imperialism, racism, and ethnic injustice. However, the book is primarily a complex example of a love story, in which two people deeply connected to each other face the pain of separation and successfully pass this test to their feelings and commitments.

The evolution of the romantic relationship between Tish and Fonny is at the story’s foreground. The fight against racial bias and the inconsistencies of the criminal justice system are of minor importance: nothing but love moves Tish on her way to releasing Fonny from imprisonment; nothing but love gives Fonny more hope and optimism. Love gives Tish and Fonny strength and endurance necessary to successfully pass the test of separation. In this sense, James Baldwin’s book is the triumph of the sincere human feelings, which can successfully break the racial and social barriers in the way to never ending happiness.

If Beale Street Could Talk: The Story of Love and Endurance. (2016, Sep 24). Retrieved from https://studymoose.com/if-beale-street-could-talk-the-story-of-love-and-endurance-essay 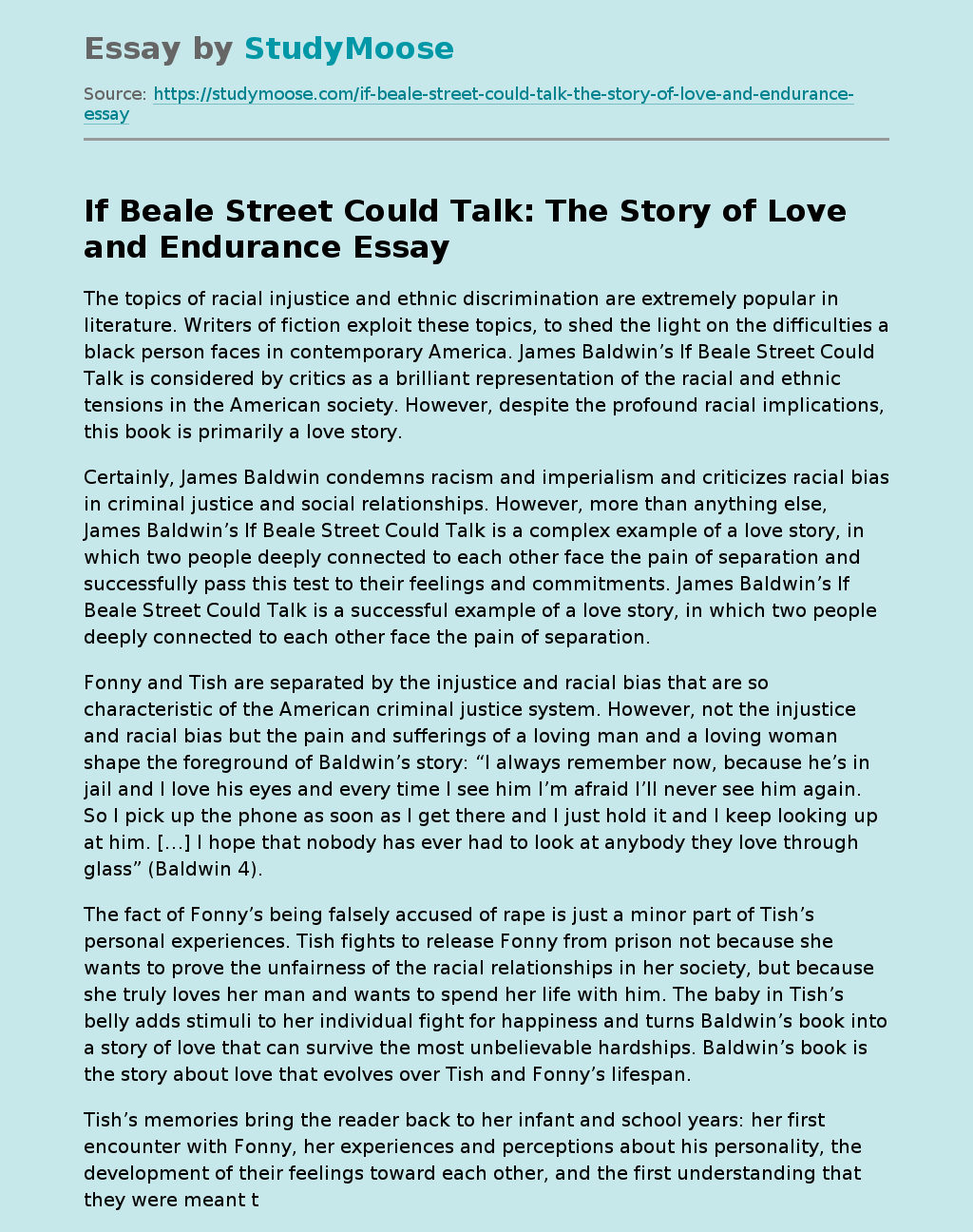