The concept of the “talking heads” or talk shows was developed in order to maximize the engagement of the audience to these types of programs. When talk shows were introduced to television, it changed the then existing trend of visuals as a participatory medium for viewers. Television during that time was satiated with overrated types of visuals that the media decided it was time to introduce fresh vehicles for communication and entertainment. Thus, the concept of television talk shows.

The framework and design of television talk shows was founded on non-fiction content, striving to relate and connect with people in order to harbor a large audience by relying on individuals who can deliver facts or genuine information – usually the kind of information that people stop and listen to because of man’s natural design to learn and thirst for new knowledge to satisfy their curiosity.

Don't use plagiarized sources. Get your custom essay on
“ Talk Shows: Discourse and Performance ”
Get custom paper
NEW! smart matching with writer

Although the introduction of talk shows to television have proven to be successful in terms of attracting audience population, there seems to be some disadvantages that limit its ability to realize its purpose, especially when talk shows are highly dependent on individual experiences from its guests or speakers.

Since attracting viewers is reliant on how talk shows display human experiences and common or universal point of views, it is at the same time informative and thought provoking.

One of its advantages is its ability to lure viewers by relaying information that could be useful and applied to their lives. This makes them watch and listen. However, the disadvantage of utilizing personal experience for television talk show programs is that it limits what viewers can learn or acquire from it, such that information are highly subjective and at times only true to some people.

It lacks the formality of discussing particular issues, events, phenomena, or any other subject of discussion under its full context and entirety, such as the social, economic, political, or even religious points of view that contribute to the formulation of rational, unbiased, and factual information. (Andersen, 1995)

Although this might be the case, just the same, personal experience is an authoritative source of information which strongly influences its viewers. Primarily, talk shows become appealing to its viewers because the guests or speakers seem to be their representations as common human beings. Individuals feel their importance because the media is interested in listening to their story as represented by the guest or speaker who shares their personal experiences or points of view.

This sets apart news from talk shows, because news shows cannot break the impenetrable barrier that separates them from the viewers. News shows are one-directional, such that the viewers are just mere receivers of information because they are facts coming straight from professionals or credible sources – unquestionable and sometimes final. The social construct of talk shows somewhat fosters two-way communication because viewers feel the process is interactive – they can contribute to the discussion by processing in their minds what they think about the topic, etc.

“The Oprah Winfrey Show” is a talk show hosted by Oprah Winfrey herself. Thousands or maybe millions of people around the world know her and are hooked on her talk show. Although the guests and speakers are great contributors to the success of the show, Winfrey herself have provided inspiration to her viewers even if she only hosts the show. The reason why people are drawn to Winfrey’s show is that she epitomizes what human beings want to become.

She is an idol to millions, and her life is one of the great examples of success stories – from being poor to becoming immensely successful because of her perseverance and hard work, or from her experience in the past being abused as a child but overcoming it. (Oprah Winfrey, Talk Show Host and Philanthropist, 2007) Because of her strength and good character, people feel they are represented by someone, who, like them have faced challenges and have struggled at some point in their lives. People feel that the show offers them something that they can identify with, from Winfrey, from the guests or speakers.

Sometimes when DeGeneres tells jokes the studio audience will be hurt laughing in the background. The viewers in the studio always express their emotion depending on particular situations. Seeing the studio audience participating, highly-engaged to the show, creates a desire for people to become closely connected with the show that they become avid viewers and commentators. Sometimes, the studio audience creates an atmosphere of “viewability” and entertainment as television viewers see how the studio audience are touched or influenced by the talk show.

Since talk shows are non-fictional, participated in by individuals willing to share personal experiences and points of view, programming should then be democratic and liberal to an extent. However, there are some elements of talk shows that hinder its capability to exude their democratic potential. Focusing on individualized problems, interpersonal relations, and private solutions does not represent an issue that the majority of the audience will relate to. Problems or issues that are specific to an individual do not draw the attention of the public because they cannot identify with the guest or speaker and learn something that they can apply to their personal lives.

Language therapy is another hindrance to talk shows’ democratic potential because it fails to show something rational and legitimate. Language therapy sessions in talk shows exploit individuals as they are urged into displaying emotions that sensationalize the simple and rational. Moreover, language therapy is also individualized, such that not everyone can associate themselves during the process.

Perhaps one major factor that confines talk shows is irresponsibility. Sometimes, talk shows fail to choose issues and topics that will be discussed wisely. Irresponsibility includes airing segments that are likely to exhibit something negative or undesirable that might be adapted by society. “The Jerry Springer Show” is perhaps an ultimate example of an irresponsible show that features the ugly face of life – men cheating on their girlfriends or wives, friends fighting over a boy, etc. Sometimes the guests in the show are minors. The insensitivity of the show to the impact of violence and obscenities sets up the show as irresponsible and tactless.

Talk shows are supposed to offer something new, apart from the usual visual, audio, or audio-visual elements of television. Talks shows are supposed to embody non-fiction television, something that people can related to or identify with – a source of information they can apply to their lives making it better or lighter. Sometimes though, talk shows are not wary of factors that cause the elimination of the democratic potentials that legitimizes and rationalizes its points. Herein lays the importance of realizing the format or dimensions of talk shows in order to present something real and relatable material to the viewers. 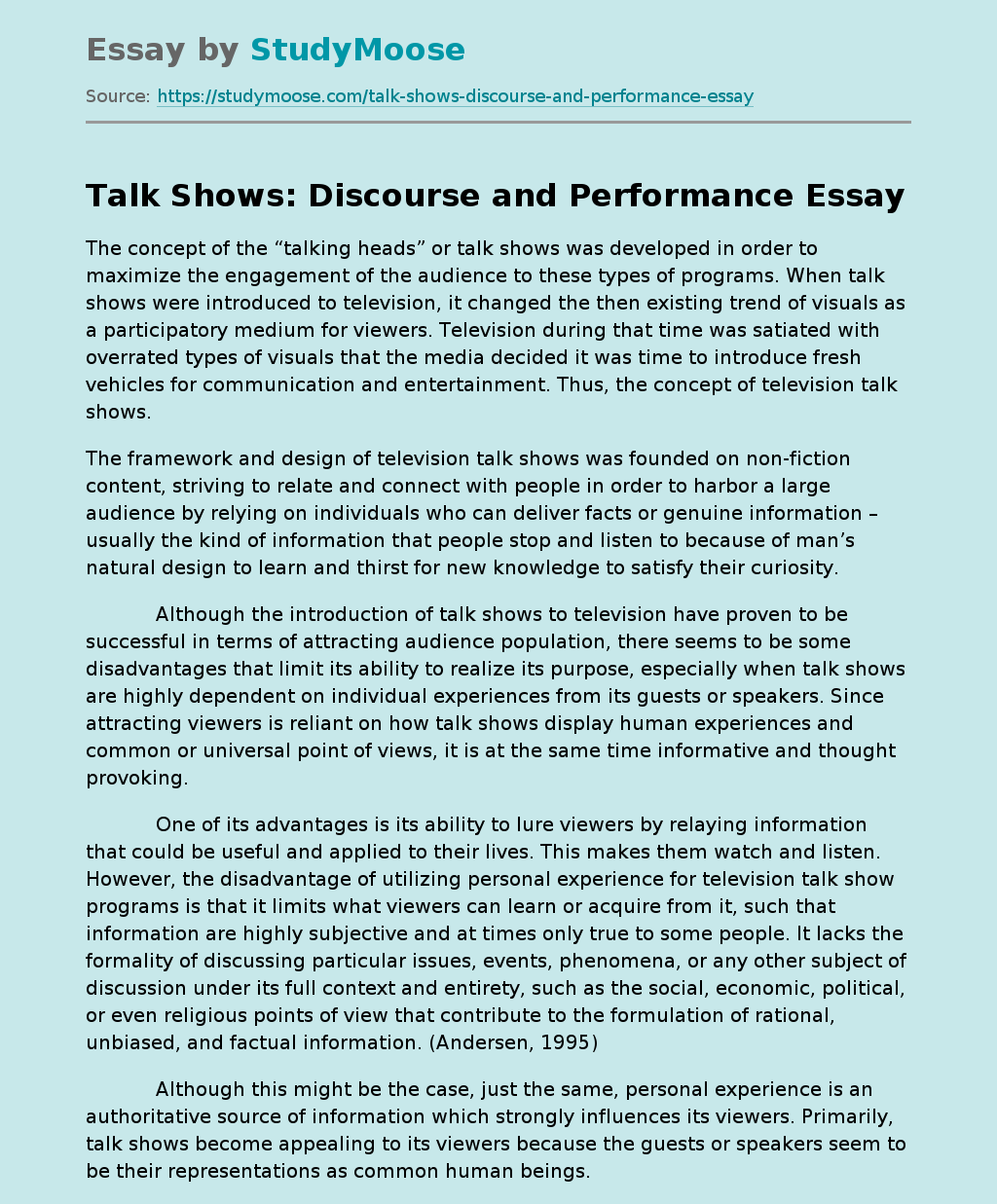