"In Reification and Utopia in Mass Culture" by Frederick Jameson

It is true that manipulation theory sometimes finds a special place in its scheme for those rare cultural objects which can be said to have overt political and social content: thus, 60s protest songs, The Salt of the Earth, Clancey Segals novels or Sol Yuricks, chicano murals, and the San Francisco Mime Troop. This is not the place to raise the complicated problem of political art today, except to say that our business as culture critics requires us to raise it, and to rethink what are still essentially 30s categories in some new and more satisfactory contemporary way.

Don't use plagiarized sources. Get your custom essay on
“ “In Reification and Utopia in Mass Culture” by Frederick Jameson ”
Get custom paper
NEW! smart matching with writer

(Jameson 139)I initially read this quote as a praise of political art as so worthy an object of study that its complexities could not be fully addressed within the scope of Jamesons work. In other words, Jameson was humbly admitting that political art is deserving of its own lengthy analysis. Why, though, is Jameson incapable of addressing political art (and implicitly counter culture) for more than a page in his nineteen page essay describing modern culture?As I reread the quote, I began to hear a dismissive tone in the words special place and rare.

How rare is overt political and social content? How rare are 60s protest songs? While the historicity of the category 60s can be appreciated, and indeed Jamesons use of it appears to be grounded in skepticism towards the authenticity of political art emerging outside of collective life, it seems as if Jameson is using it to contain a threat to his argument.

The threat, that is, that overt political art and action have been present and overt since before the 1960s, and continue to persist now. I feel that, to a significant extent, his position as academic shields him from and allows him to theorize away a counterculture that has been very much alive and struggling. Or, as Hakim Bey opens his TAZ: The Temporary Autonomous Zone, Ontological Anarchy, Poetic Terrorism, CHAOS NEVER DIED.The production or assumption of a limited period of the 60s tends to perpetuate a nostalgic distance from a period of political art, counterculture, and resistance that never really ended (or began). In many ways the 60s have come to resemble a safe countercultural commodity. One can easily find coffee table books on the collective rebellious phase of the baby boomers youth, or one can watch the Wonder Years or Forest Gump and recall a period before choosing to turn off, tune out, drop in.

If these experiences are too lonely, one can visit my home town of Cleveland, Ohio with family and peruse the Rock and Roll Hall of Fame to study Beatles artifacts or Jimi Hendrix guitars behind glass for a $10 fee. All of these commodities appear to recuperate political art and counterculture except for that they only do so in retrospect, and in a fashion that uses physical/spatial distance to construct a sense of historical distance that must be willfully believed. Just a few blocks away museum visitors, were they to instead choose to visit the Tower City Mall at public square on a Sunday, would likely encounter middle class kids and homeless people dissolving cultural boundaries at Cleveland Food Not Bombs. I dont propose, in response, a hasty rejection of some mythically totalitarian historical metanarrative, but rather I propose a more complete and honest history that dissolves the nostalgic distance between political art then and recuperated art now. Unfortunately for Jameson, who has chosen to ignore the reality of such a history for the sake of a commentary on his own constructed meta-society, many post-60s examples easily come to mind. The punk rock movement, certainly with a strong collective component, produced material easily accessible to mass culture. The Sex Pistols Anarchy in the U.K. was released in 1976, and Crass was releasing agitating songs like Do They Owe Us A Living?, Punk is Dead, and Fight War Not Wars in 1978.

Rage Against the Machine, arguably one of the more important alternative bands of the 1990s, initiated a radical Axis of Justice with System of a Down and donated all of its proceeds from a tour with U2 to organizations as overtly resistant as EZLN. Any middle class adolescent who frequented Ozzfest or other metal festivals in the 1990s and 2000s is likely aware of System of a Downs Steal This Album, or the lyrics to their politically charged Prison Song. Someone interested in hip hop enough to scratch the surface will likely encounter KRS-1s Sound of da Police released in 1993. And Radiohead, now international superstars, have just released their latest album essentially for free, bypassing the music industry entirely. Jameson might respond to me with a question like, yes, but why havent they worked?, expecting an answer affirming their status as commodities which could be subject to his ideology/utopia dialectic.

My answer to such a question would be precisely my historical point: its in the works. Jameson cannot escape his own position within consumer capitalism in that it is his choice to perceive a large body of political art as contained within a diluted dialectic that imposes itself upon consumers. Perhaps a radically engaged and tactical patience can be counterpoised against the image of the passive consumer. And besides, this is not to mention the countless DIY zines circulating around Infoshops, in radical circles, and across the hipster-radical bridge in trendy coffee shops. A nice account of post-60s anarchist praxis can be found in criminologist Jeff Ferrells Tearing Down the Streets: Adventures in Urban Anarchy, where he discusses his own experiences with collective activities as obverse as pirate radio, graffiti, and biking in critical masses. But are these practices rare? Perhaps only to those who continue to ignore, dismiss, and keep a distance from them. Are they exclusive? Well, this is not the place to raise the complicated problem of countercultural elitism and exclusion.

For the rest of the items on Jamesons list, it appears as if he has chosen examples that fit his argument of rarity. When I searched for Clancey Segal on Google, for example, the only matching result I could find was Jamesons article! Perhaps my own ignorance is to blame for my unfamiliarity with the rest of the items on Jamesons list. If this is the case, how is it that I was able to come up with several examples of my own? Are they simply inauthentic, easily recuperated, or not overt enough? Am I a crazy radical detached from the revolutionary potentiality of mass culture? Or are my examples invalidated and recuperated precisely at the moment that Jamesons attitude of disengagement and struggle for theoretical security reposition them inside of some abstract near-omnipresent nightmare?Indeed, it often seems, provided one accepts the omnipresent nightmare situation, that any disbelief or skepticism towards such a macrocosm is analogous to falling back into the Matrix and being reintegrated into the naïve consumerist masses.

But does the myth of the rarity of genuine and overt political art- and resistance in general- honestly acknowledge a totalizing or nearly totalizing condition like Guy Debords spectacle or Lewis Mumfords megamachine, or does it merely reveal its proponents inability or refusal to engage with political art and action of their contemporary milieu? To what extent does a fear of recuperation reproduce precisely the distance required for recuperation? The ideological component of Jamesons writing comes to bear in his own language: to rethink what are still essentially 30s categories in some new and more satisfactory contemporary way.

I think Jameson redeems himself when his ideology/utopia dialectic of consumerism is pointed at criticism itself. Just as capital must re-create and recuperate a utopian component in its commodities, Jameson and his perceived brotherhood of culture critics must re-think a rare and fetishized collection of genuine political art and acts to continue to theorize a hegemonic modern culture. If we directly engage in overt political art or action, however, the University can only have us, as rare historical events, in retrospect.

"In Reification and Utopia in Mass Culture" by Frederick Jameson. (2016, Jul 25). Retrieved from https://studymoose.com/in-reification-and-utopia-in-mass-culture-by-frederick-jameson-essay 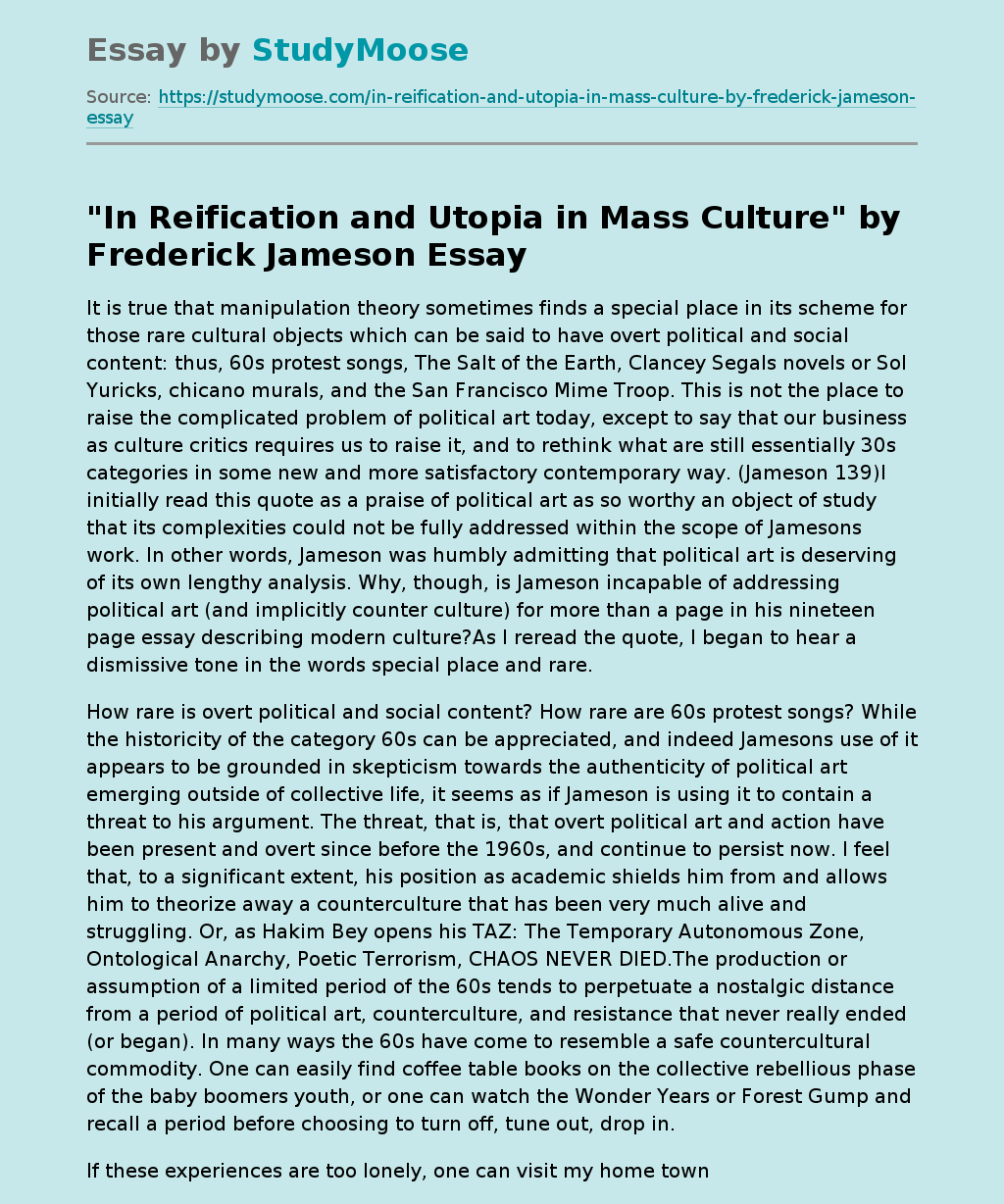