Iris is a goddess of sea and sky, whose work is as the messenger of the gods and her representation is the rainbow. She takes the messages from the gods, especially from Hera and Zeus, to the Earth and to the deep ocean and the underworld. So she connects the mortal world to the god`s and immortal’s world. She is always carrying a caduceus, that is like a scepter or a magic wand which it`s related with Apollo; who gave it to Iris to link or connect the mortal and immortal world, to take the souls to the underworld, and to travel at the mind`s speed.

Don't use plagiarized sources. Get your custom essay on
“ Greek Mythology and Iris ”
Get custom paper
NEW! smart matching with writer

It also represents peace and the difference between gods and messengers. Iris also cares a kind of jar or ewer full of water from the infernal River Styx, with which she makes to sleep all those who perjure themselves, by a command of Zeus. After that, it is mentioned that Hermes is officially considered the good news messenger of the male gods and Zeus, and Iris because of being the Hera`s messenger and leave behind the other god’s messages, is considered the bad news messenger.

Afterwards, she ends to be Hera`s maid.

Iris is the daughter of Thaumas, a marine god, and the air nymph Elektra. Her sisters are the Harpies; Aello, Celaeno and Ocypete. It is said in some versions, that she has a sororal twin (non-identical sisters) called Arke; a titaness. Iris is married with the west wind god, Zephyrus.

And her son is Pothos (god of passion). The divine messenger is mentioned in the famous story, the Iliad; in which Iris doesn`t have a very important role. But she is mentioned as a beautiful goddess with golden wings and pretty winged sandals.

Also, she appears in Heracles play besides Madness, who kills Heracles’ sons and his wife, Megara. MESSENGER IRIS & THE EXILE OF DEMETER Zeus sent Iris to call Demeter back to Olympos when she went into self-imposed exile following the abduction of Persephone. But the goddess refused to heed the call. Homeric Hymn 2 to Demeter 315 ff (trans. Evelyn-White) (Greek epic C7th or 6th B. C. ) : “First he [Zeus] sent golden-winged Iris to call rich-haired Demeter, lovely in form [to return to the gods on Olympos]. So he commanded.

D. ) : “The winged Arcadian [Hermes] is the messenger of supreme Jove [Zeus]; Juno [Hera] hath power over the rain-bringing Thaumantian [Iris the rainbow]. ” Statius, Silvae 5. 1. 103 ff : “Juno’s [Hera’s] maid [Iris the rainbow], who glides down through the liquid air and binds her pictured arc about the rainy sky. ” COMPARISON AND CONTRAST The exile of Demeter*Statius, Silvae •She`s considered the most important messenger of the gods. •She obeys Zeus`s commands immediately. •She`s described as a fast and marvelous god`s messenger.

Iris was considered the most important messengers in the Olympus. She obeyed Zeus’s commands and carried Hera’s and another important god’s messages. She took the souls to the underworld and was able to travel at the mind’s speed. Besides, she was one of the most beautiful goddesses; her representation, the rainbow, is one of the most marvelous considered in the Greek mythology. Iris is described as a golden-winged sea and sky goddess. She is able to be in either of the sea and the sky.

I think Iris has become one of my favorite mythological goddesses. I loved the way she is described and represented. Besides, she is a powerful messenger who can go to the deepness of the sea and the underworld through the sky with the mind’s speed. And also, she is responsible of the rainbow when she travels to the mortal’s world. The truth is that I have always loved the rainbow. So it couldn’t be better for me another goddess than Iris for this work because until now I knew that there was a goddess of the rainbow in the Greek mythology.

In the story of Status, Silvae, I didn’t like that much the idea of the importance and preference to Hermes above Iris and that afterwards she carried the bad news to the gods. The story says that Hermes became the official messenger of the masculine gods and some goddesses; because they no longer trusted Iris and she obeyed Hera’s commands and became her maid. Also, it says that Iris got married with the marine god, Thaumas and had a son, Pothos. It doesn’t say anything else about neither her married life nor her son. About the other sources I looked for, like the Iliad and Heracles; Iris didn’t have an important role.

In the first one, she was only mentioned as the god’s golden-winged messenger and obeyed every command to carry a message for the Trojans, especially from Zeus. In Heracles story, Iris was especially considered as Hera’s maid and as a mean goddess who obeyed her and took Hera’s messages to bother and menace Heracles. She also appears besides Madness, who killed Heracles’ sons and wife. Total # of words: 820 Sources: MLA •”Iris (mythology). ” Wikipedia, the Free Encyclopedia. Web. 24 Nov. 2011. . •”IRIS : Greek Goddess of the Rainbow, Messenger of the Gods | Mythology, W/ Pictures. 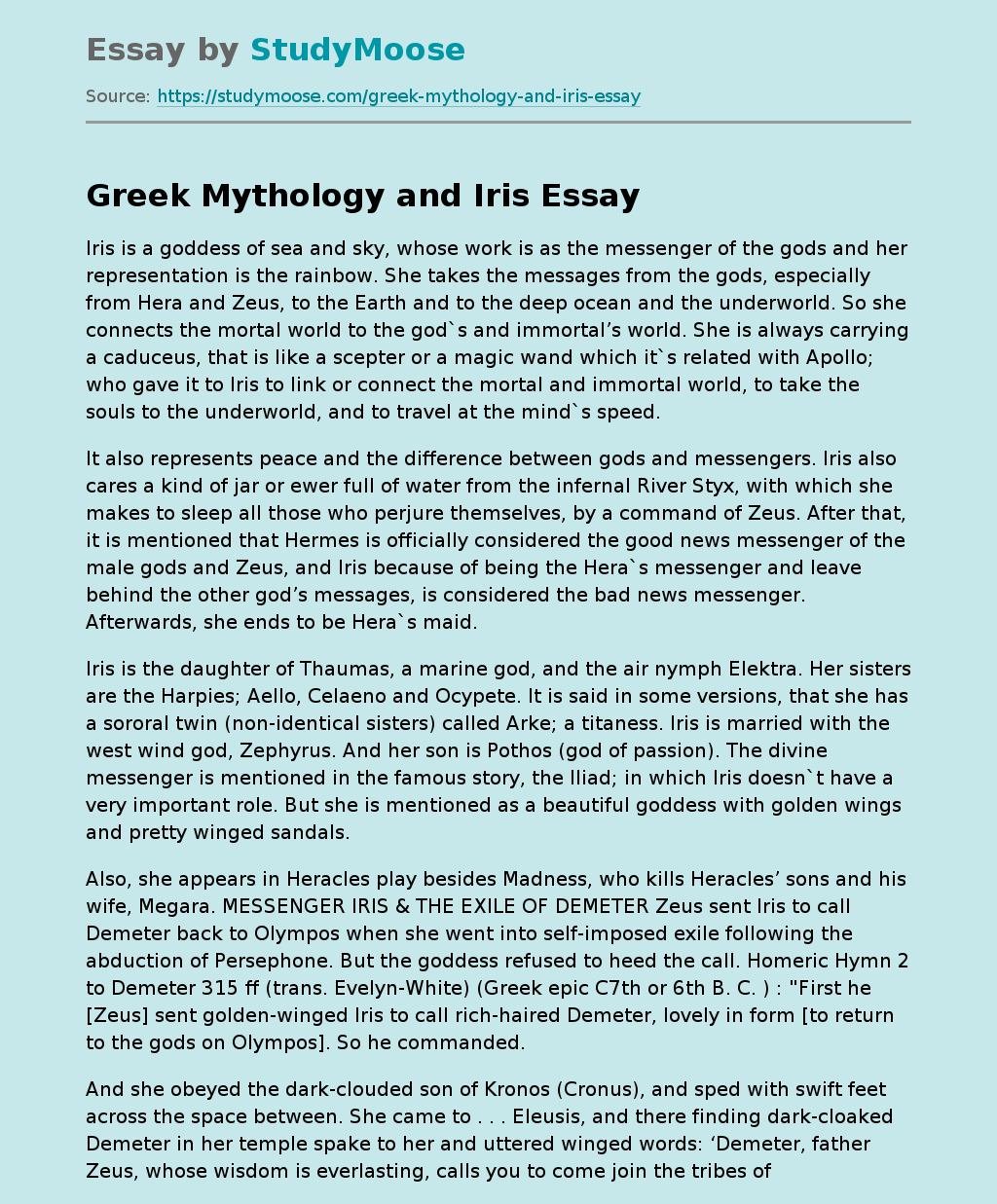