Don't use plagiarized sources. Get your custom essay on
“ Abraham Lincoln, Melungeon or Myth? ”
Get custom paper
NEW! smart matching with writer

His father was “said to be” Thomas Lincoln and his mother Nancy Hanks. He was born in a log cabin in Sinking Springs, in Hardin County Kentucky. After the death of his mother, his father remarried a wonderful lady named Sarah Bush. Abraham loved his step-mother and became very close to her and her 3 children. Despite his relationship with step-mother Sarah, Abraham did not maintain a good relationship with his father because of his resentment he held towards him having to turn all his wages over to him by some sort of law.

Because of Lincoln’s hatred of slavery, which denied to slaves the “fruits of the labor” (McPherson 3), some people believe it may have influenced Thomas Lincoln expropriation of Abrahams’ earnings. Their relationship became so strained that when his father called him to his death bed, Lincoln refused to make the 80 miles trip to see him. His father died with no goodbyes given. Despite Lincolns troubled and humble beginnings, he was able to self-educate himself, mainly by reading lots of books and became a very successful lawyer.

In the American peoples’ eyes, Lincoln’s tale of “rags to riches”, is the ultimate “American” success story (Steers, Edward).

There have been many myths, hoaxes and misconceptions regarding one of our greatest President throughout the years. During his early political career there was lots negative campaigning that was used to the taint his campaign, just like we see and hear of today. Charges of illegitimacy were often hinted at because of the negative effect it had on the accused. “Illegitimate” people were considered defective. Lincoln’s paternity has long been in question due to the knowledge that a bastard son was born to a man named Abraham Enloe (Barton 18). The mother of the baby boy was a servant girl who worked in the Enloe household name Nancy Hanks (Lincoln’s mother). The question of his parentage generated much interest because of this claim and because Lincoln himself was reluctant to comment on his father and mother. Folks believed that it served as some sort of evidence of his knowledge and shame of his illegitimate birth. Authors Kennedy, N. Brent, and Robyn Vaughan Kennedy.

The Melungeons: the resurrection of a proud people: an untold story of ethnic cleansing in America. 2nd, rev., and corr. ed. Macon, Ga.: Mercer University Press, 1997. Print. Presents the question of whether or not Abraham Lincoln was Melungeon himself, making him the first Melungeon (tri-racial) President. According to Ely Gallegos (a research team member), there is a great deal of circumstantial evidence that Lincoln shared a Melungeon heritage, possibly through both parents. Lincoln’s family fits the Melungeon model very well. Lincoln’s paternal grandfather also named Abraham Lincoln, immigrated with his wife Bathsheba Herring and their 5 children to Kentucky. Why would an established settler leave the beautiful Shenandoah Valley for the wild, untamed lands of Indian-dominated Kentucky? Money? Possibly a Melungeon movement? Lincoln’s father features also fit the description of a Melungeon. His mother, Nancy Hanks was born an illegitimate child to Lucy Hanks. History has no record of the identity of Nancy’s father.

Nancy also had many characteristics of a non-Anglo (Sandburg 30). Her hair dark, dark brown, keen little gray eyes, outstanding forehead, somewhat accented chin and cheek bones and a body of slender build. Because of the geographical location of the Lincoln’s family and outstanding questions of Lincoln’s heritage, this leads to the theory of many researchers that Lincoln could possibly be a Melungeon himself. If true, this would make Abraham Lincoln the first (tri-racial) President. Brent Kennedy, an author who wrote the book “The Melungeons”, a spent a great deal of time writing about a time of “ethnic cleansing in American” and shares details on how the Melungeons seemed to disappear during the time of the first “census taking”. Because of their tri-racial ethnicity, they did not fit under any category listed on the Census, so for “recordkeeping” purposes, they were categorized as either melotos/white/Indian/Africa American, when in fact they were “all”.

Melungeons were suggested to be descendants from “tri-racial isolates” (Los Angeles Times), a mixture of whites, blacks and American Indian who historians say interbred along Appalchia’s ridges during the 18th centuries. Old documents and stories passed down throught the generations tell a tale of “Portugese” Berbers, “sheperd-like” people who came to American in ships. They were proposed to be decendants of early Portuese, Spanish, Sephardic Jewish Mulims, Moorish, and/or Gypsy/Roma colonish in the southeastern United States (Kennedy 1997; Hirschman 2005; Price 1953), that were exiled from Spain and Portugal through a religious witch-hunt know as the “Spanish Inquisition”. Many of them settled in the hills of the Appalachian Mountians. Over time The Melugeons, were pushed off their lands, denied their rights, murdered, mistreated and became an embittered and nearly defeated people. They tried to fit in with Anglo neighbors, but lost their heritaage, their culture, their names and their original religion, but not their genetic structure.

Many folks who believed themselves to be of Melungeons decendant, have become a part of “on-going” research which even includes giving blood samples. There continues to be actual on-going Melungeon DNA studies still taking place still today. Lincoln’s paternity has long been in question due to the knowledge that a bastard son was born to a man named Abraham Enloe (Barton 18). The mother of the baby boy, was a servant girl who worked in the Enloe household named Nancy Hanks (Lincoln’s mother). The question of his parentage generated much interest and because Lincoln himself was reluctant to comment on his father and mother. Folks believed that served as some sort of evidence of his knowledge and shame of his illegitimate birth. During his campaign many people tried to use this information against him. They tried to discredit him, by calling him “illegitimate”. Many people still today are interested in the fact that Abraham Lincoln may been the first “tri-racial” President. A couple hundred years later after his birth, there are still many unanswered questions regarding Abraham Lincoln.

“Robert Ingersoll said it best. “Lincoln, he proclaimed” was a not a-type, He stands alone-no ancestors, no fellows, no successors”. Even the word Melungeon became a most disparging term. To be legally classified as a Melungeon, meant to be “Nobody at all”. What would it have meant for Abraham Lincoln, a “self-educated”, depressed human being, born in a one room cabin to illegitmate parents to be labeled a “Melungeon”? Would the American people have voted for him? Did Lincoln’s passionate spirit to “free the slaves” come deep from within or did it come from darker place then anybody could ever have imagined? Just how different would the pages of our history books read, if people would have truly believed that Abraham Lincoln was a “Nobody”, a Melungeon? 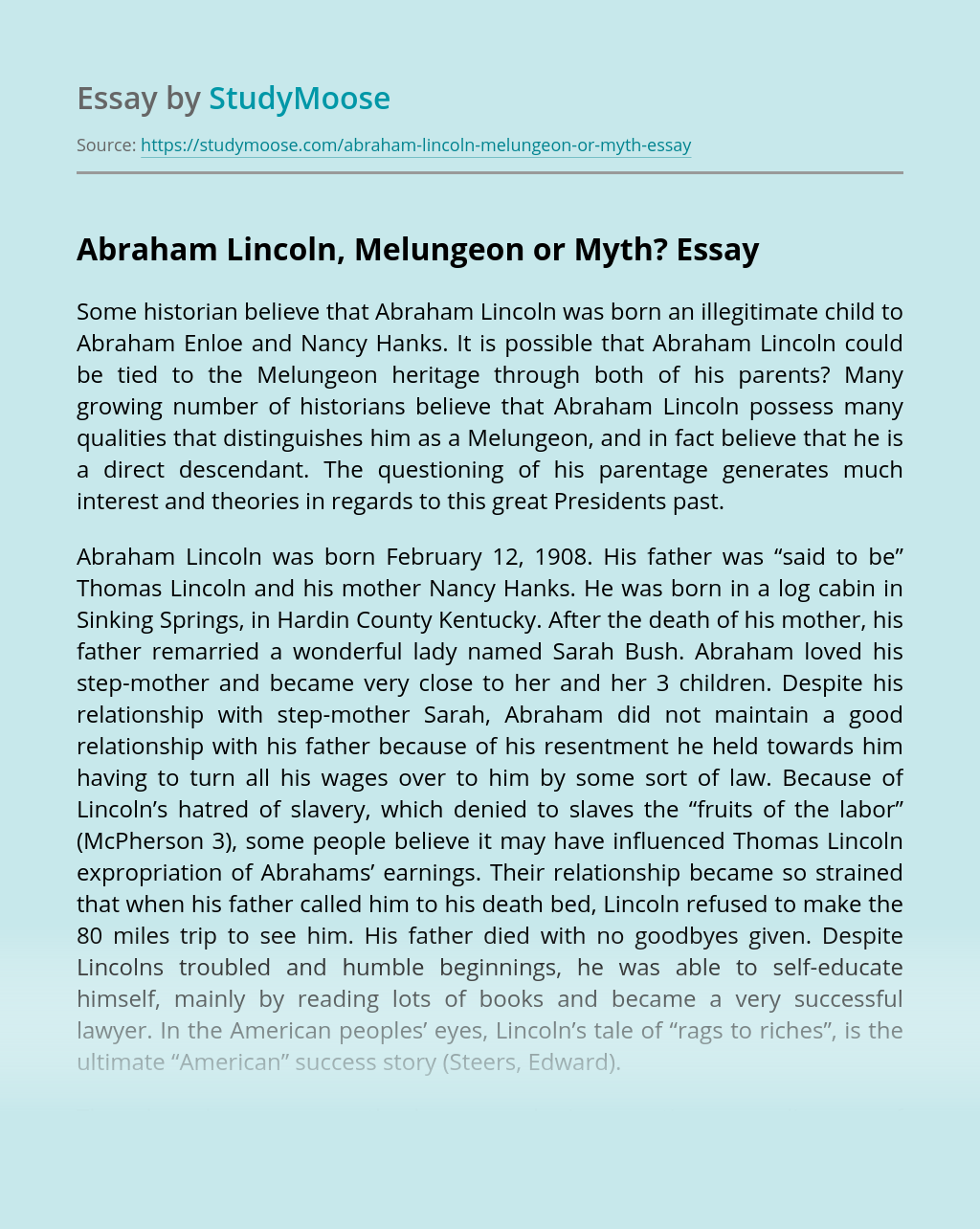