In Abraham Lincoln’s Second Inaugural Address, he uses many different kinds of rhetorical strategies to unite a broken nation. During the time of the speech, it is four years into the Civil War and it is about to end. In this speech, Lincoln uses allusion, parallel structure, and diction to unify the North and the South.

A rhetorical strategy that is seen throughout Lincoln’s speech is allusion. He uses God and the Bible to show that the people both from the North and also the South have the same values.

Lincoln says, “Each looked for an easier triumph, and a result less fundamental and astounding. Both read the same Bible and pray to the same God, and each invokes His aid against the other. It may seem strange that any men should dare to ask a just God’s assistance in wringing their bread from the sweat of other men’s faces, but let us judge not, that we be not judged.

” What Lincoln said was from the Bible, and most people could relate because many of the citizens were very religious. Lincoln also states, “… Let us strive on to finish the work we are in, to bind up the nation’s wounds…” That was also an allusion to the Bible, impacting the people to help fix the nation and to help come together as a nation. Religion was very important to many citizens of that time, so the religious allusion used in the speech was very effective.

Another strategy used in Lincoln’s address was parallel structure.

The parallel structure emphasized what his goals were for the nation. For example, he says, “to see the right, let us strive on to finish the work we are in, to bind up the nation’s wounds, to care for him who shall have borne the battle and for his widow and his orphan, to do all which may achieve and cherish a just and lasting peace among ourselves and with all nations.” Abraham Lincoln’s goal was to establish peace again within the two sides and to rebuild the nation. Another example of allusion was at the beginning of the speech when Lincoln said, “All dreaded it, all sought to avert it.” He said, “all” to bring together both sides, saying that neither one wanted to fight, but now they have to come together to fix the “broken nation.”

Lastly, Abraham Lincoln uses diction to create a feeling of unity between the people. In his speech, Abraham says, “Both read the same Bible and pray to the same God.” Lincoln uses the word “both” often in his speech, which unifies the North and the South. It also says in his speech, “…let us strive on to finish the work we are in…” That statement reminds everyone that they’re all in it together by saying “us.” Diction throughout Abraham Lincoln’s speech adds onto the unity that was created by parallel structure and allusion.

In Lincoln’s Second Inaugural Address, he uses religious allusion, encouraging parallel structure, and repetitive diction to unify the North and the South. Lincoln’s goal when giving this speech was not to celebrate the North’s win, but to unify and to create peace between the broken nation. 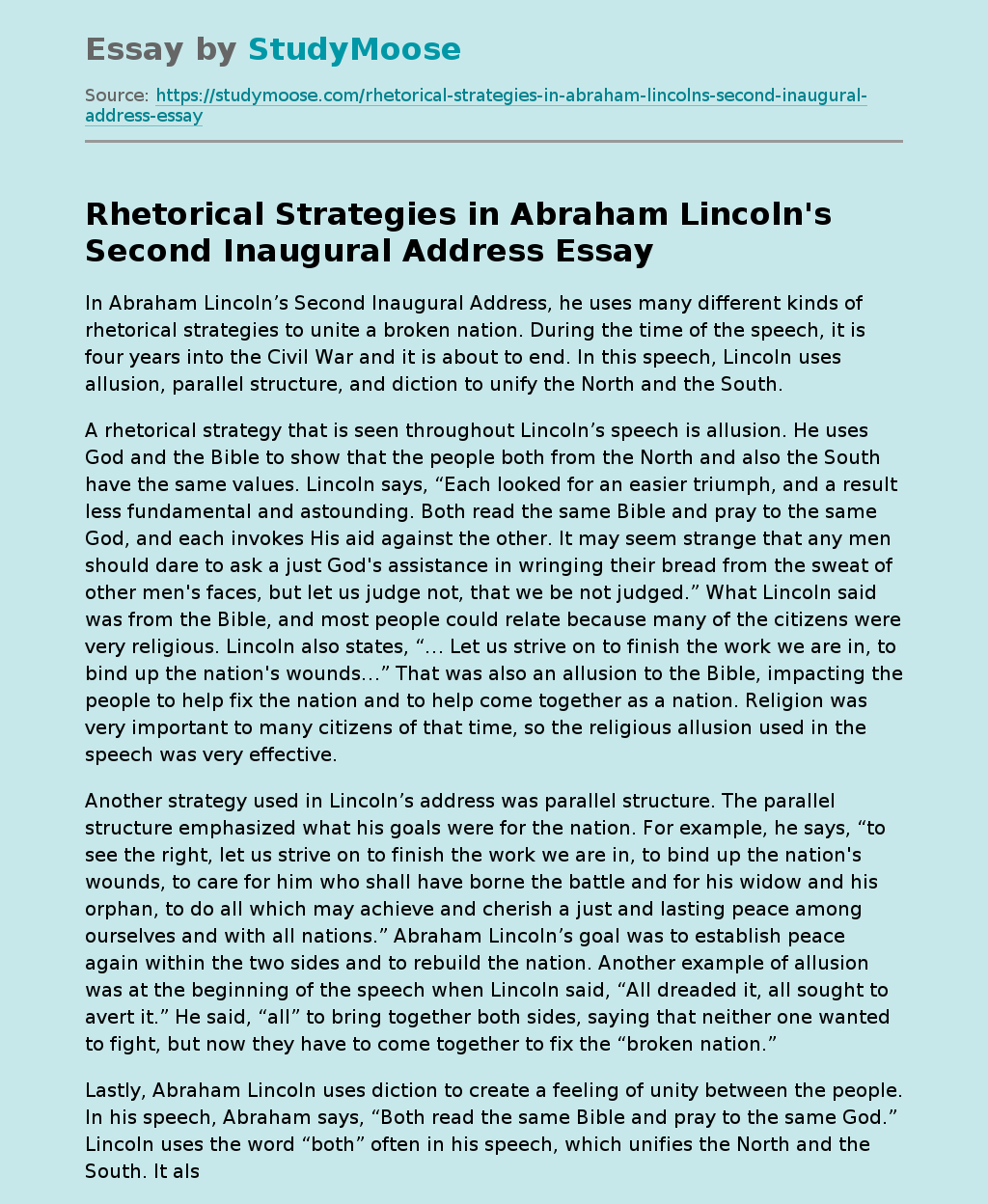