John Fitzgerald Kennedy, arguably one of our greater presidents in our nation’s history, was assassinated on a Friday in the early stages of winter in 1963; however, he had accomplished much more than a man with lesser courage could have in his services to our country. One of President Kennedy’s most memorable actions while in office, actually took place very early on in his presidency; his Inaugural Speech in January of 1961. When attempting to motivate our citizens, Kennedy speaks of our citizens being “tempered by war,” and “proud of our ancient heritage,” he very successfully appeals to the emotions of his audience.

Furthermore, his use of ethos quite effective when he speaks of sticking to the intentions and roles when compared to that of our forefathers, acknowledging the fact that we as a nation were built on the core principals provided by these men.

The least successful, yet still powerful, statements were those concerning appeals to the logic, such as mentioning the downsides economically of the arms race, which at the time was the biggest fear of all Americans.

The author of this speech, John F. Kennedy, is speaking to a wide variety of audiences in this certain situation. The most obvious is the American people, and those who are directly affected by his election. However, those who opposed the United States at the time could have been tuned in to his inaugural address, possibly to see what he is planning for the current disputes between the nations. Political parties, whether Democratic, Republican, or otherwise would have definitely been in the viewing audience, as they are practically being introduced to their new boss so to speak, and also get a preview of his goals in the near future.

President Kennedy’s purpose of giving this speech is quite simple, to motivate the citizens of the United States for his upcoming term, giving a general outline and speak of his intentions during the term. President Kennedy very early on in his speech makes his first, strong attempt at accomplishing pathos. He begins his emotional appeal by speaking of those “peoples in the huts and villages across the globe struggling to break the bonds of mass misery…” (3) This appeal is very affective due to the fact that Americans tend to have sympathy for those who are less fortunate, third world countries for example.

The author is able to draw his audience in emotionally by speaking of such countries, and how it eventually ties in to the United States, stating that “(if) a free society cannot help the many who are poor, it cannot save the few who are rich,” (3) concluding the connection between the U.S. and those countries who have a lower living standard. Kennedy continues his appeal to emotion with a weaker, yet still successful attempt. Around election time, seemingly all American’s reveal their inner-patriot, understanding this Kennedy speaks to that inner patriot. Speaking of foreign affairs, he says, “…let every other power know that this Hemisphere intends to remain the master of its own house.”(3) This appeal is successful, as speaking of the Hemisphere as a whole represents unity, and also reaches out to the pride within the audience, stating that Americans shall remain in power of all they have worked so hard to obtain.

President Kennedy makes a minimal attempt of accomplishing logos, as this was his weakest of the rhetorical appeals. As he approaches the topic of nuclear weaponry and the quest for peace, he implies that we must reach peace “…before the dark powers of destruction unleashed by science engulf all humanity…” (3) This statement is a somewhat weak appeal to logic, as many are well aware of the capabilities of the weapons being produced at the time of the speech; however, this is another very strong, emotional statement. Making such a drastic statement such as eliminating the human existence is appealing to the emotion of the audience by almost attempting to frighten them of the things to come if the arms race were to continue on.

Returning to the beginning of the speech, Kennedy makes his first, and best, attempt at accomplishing ethos. He acknowledges the issues in his term to come, and to do so, he refers back to the forefathers of the United States. Kennedy begins by saying, “…yet the same revolutionary beliefs for which our forebears fought are still at issue around the globe…” (2) This statement is a sufficient attempt at ethos, as it proves he is knowledgeable when it comes to America’s history, but also it shows that he relates himself to the nation’s most beloved figures. Furthermore, one could also argue that this statement could accomplish logos, as he proves to be logical in the sense of recognizing global issues.

Continuing along with logos, much further on Kennedy’s speech he accomplishes a very strong attempt at achieving logos. The president reassures his audience of the current goal and role of the country. He states that “…only a few generations have been granted the role of defending freedom in its hour of maximum danger. (He does) not shrink from this responsibility…” (6) Ultimately, this shows that the primary goal and purpose of his presidency is to preserve that which the United States was built upon, freedom. This quote also partly appeals to the credibility of the president, announcing that he does not shy from the great responsibility at hand proves that he will not cower from any issue that may arrive during his presidency.

Lastly, in the most powerful part of the president’s inaugural address, he is greatly successful at using pathos. He goes on to say “…my fellow Americans: ask not what your country can do for you—ask what you can do for your country.” (6) This is his most successful appeal, for he speaks as if he is challenging the audience in an individual manor. As an author, this line was meant to motivate the audience, calling all to participate in the tasks at hand.

Though the president’s life was taken too soon, he is still considered one of the greatest presidents the United States has functioned under. Though the author displayed a rather lacking example of ethos, Kennedy shines in the categories of pathos and logos throughout the entirety of his inaugural address. Under substantial amounts of pressure, Kennedy managed to achieve most of what he promised in his short term, keeping freedom in its rightful home. 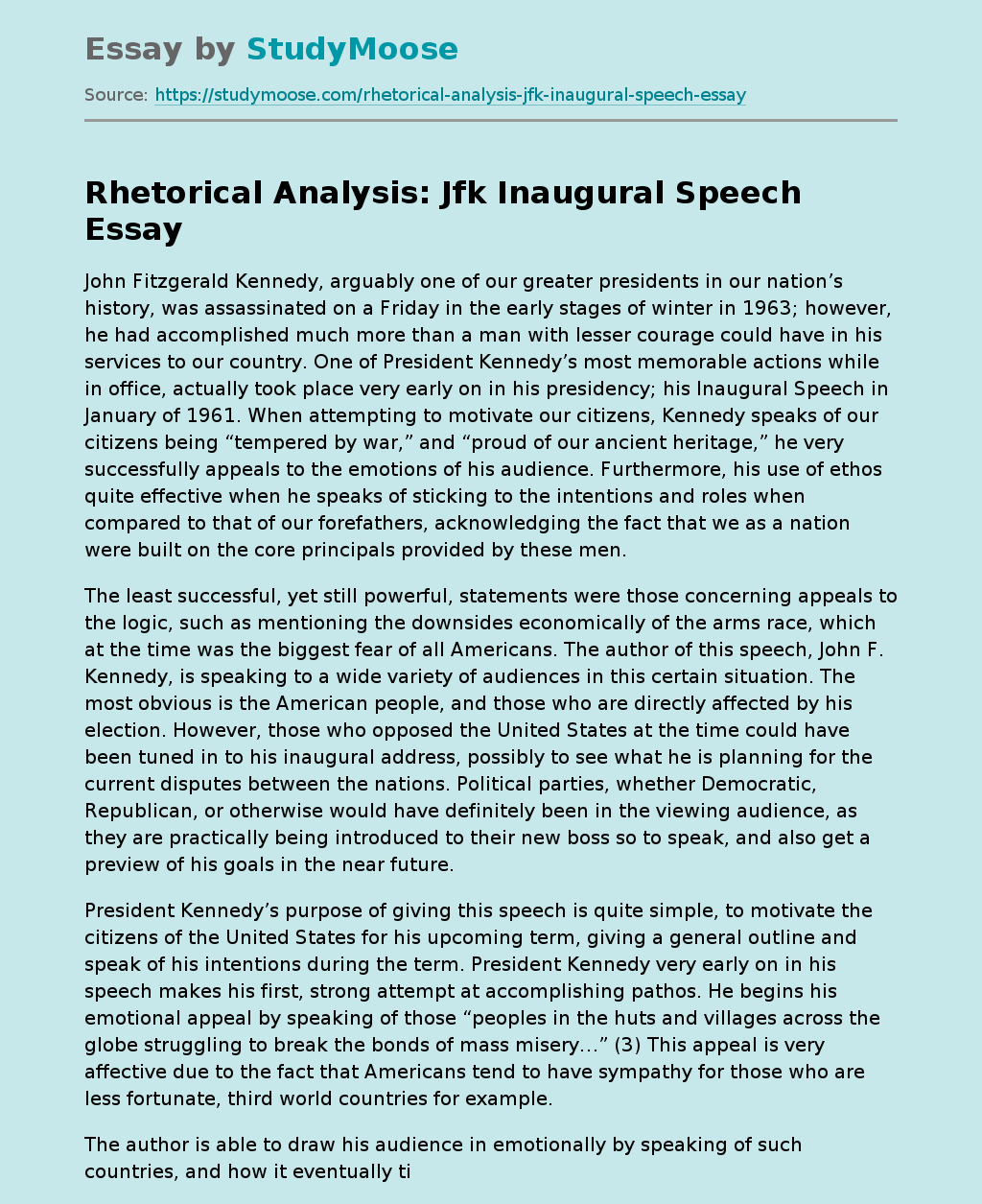