Thesis: Though they might be similar, the differences are of the utmost importance, the circumstances of each of their times, the changes in audience, and the purpose of their speeches.

“The only thing we have to fear… is fear it self…”and “Ask not what your country can do for you… ask what you can do for your country.” Two of the most influential quotes of the twentieth century taken from their inaugural speeches, as they were about to embark on the Presidency of the United States of America.

Former President Franklin D. Roosevelt voiced the first passage on March 4th, 1933 and late President John F. Kennedy voiced the second passage on January 20th, 1961. Both inaugural speeches came at important times during American History and both share similarities and differences. Though they might be similar, the differences are of the utmost importance, the circumstances of each of their times, the changes in audience, and the purpose of their speeches. Each can be interpreted it’s own manner in which they are.

To start off, each speech is presented under different circumstances during American history. Franklin D. Roosevelt is dealing with the depression of the United States. His speech comes at a time when taxes have risen, the ability to pay has fallen, and not only is the American government faced with restriction of income, but governments around the world as well. He speaks of how many farmers can’t seem to find a market for their produce and how the savings of thousands of families have vanished. Most important of all he mentions a host of unemployed citizens faced with a life and death state of affairs due to the present economical situation. His presidency therefore faces very depressing circumstances throughout this time.

John F. Kennedy, at his preset time is dealing with the Cold War and other war like adversaries. He aims at letting the entire planet know that the United States has the power to abolish all forms of human poverty and all forms of human life. Either they can friend or foe; the choice is up to them. He talks about how it doesn’t matter whether nations are with us or against us the goal is still the same, liberty. He pledges loyalty to faithful allies and requests a quest for peace from the opposition before another war begins. The circumstances at this time are crucial and his position is that mankind should face them together.

The audience has a decisive part during these significant times. Roosevelt’s audience is hunger, tiered, and begging for change. Roosevelt recognizes these things and he thanks God that it is only material thing such as money, and residences that are effecting the nation instead of plagues and famine that could destroy our way of life. He speaks to the people with sympathy yet with the confidence that everything will be all right. That the dark days will be worth all they cost and that it will teach us that we will change the situation for the better and not for the worst. The citizens then have something to look forward to and that there will be work again in the near future.

In the case of Kennedy his audience is the whole world. He lets them know that America means business. He speaks with enthusiasm that we are not afraid of defending our country and by no means are we going to back down. He feels that we should be fighting with our real foes; tyranny, poverty, disease and war itself. There should be no fighting for ideas such as communism. The world should take the same high standards of strength and sacrifice that Americans so proudly fight for and fight themselves. Kennedy’s audience is more focused on the resolution of peace than fighting another war.

Purpose, together these speeches have a common purpose, to motivate. However there is a distinction in Roosevelt’s speech, his main purpose is to motivate the country into employment, there by creating job opportunities. He affirms that it is not an impossible problem and the government can deal with it with by accomplishing greatly needed projects to stimulate and reorganize the use of national resources. He expresses this through out most of his speech. Giving motivation to keep on living, for there will be a beautiful future to look forward to. Thus the purpose of his speech is in his quote “The only thing we have to fear… is fear it’s self.

Kennedy on the other hand is not only trying to motivate the American people, but the world as well. The purpose of his speech is do declare a new beginning to point out his friends and foes. He offers a chance to all enemies to start anew in search of peace. The chances for nations to join together and explore the stars, conquer the deserts, eradicate disease, tap the ocean depths, and encourage the arts and commerce. He lets the public understand that what he is asking for will not be accomplished during present time but it will and that it is time to begin the chain of events that will prosper in the future. Not only for the people but also for their children. Though all this he lets the nation comprehend that we must be united in this pursuit and fight for what the country believes, “Ask not what your country can do for you… ask what you can do for your country.”

To finish up, both presidential inaugural speeches have their differences but they both get the similar message across: inspiration. Without speeches such as these the American people would just give up and die or our democratic government might have crumbled to the ground. Lucky for us both inaugural speeches couldn’t have come at better times in history. Each one in their times, with the changes in audience and there incredible purpose to change hopelessness into hope. Thus the contrast of Franklin D. Roosevelt and John F. Kennedy’s inaugural speeches, is of great importance and will be for generations to come. 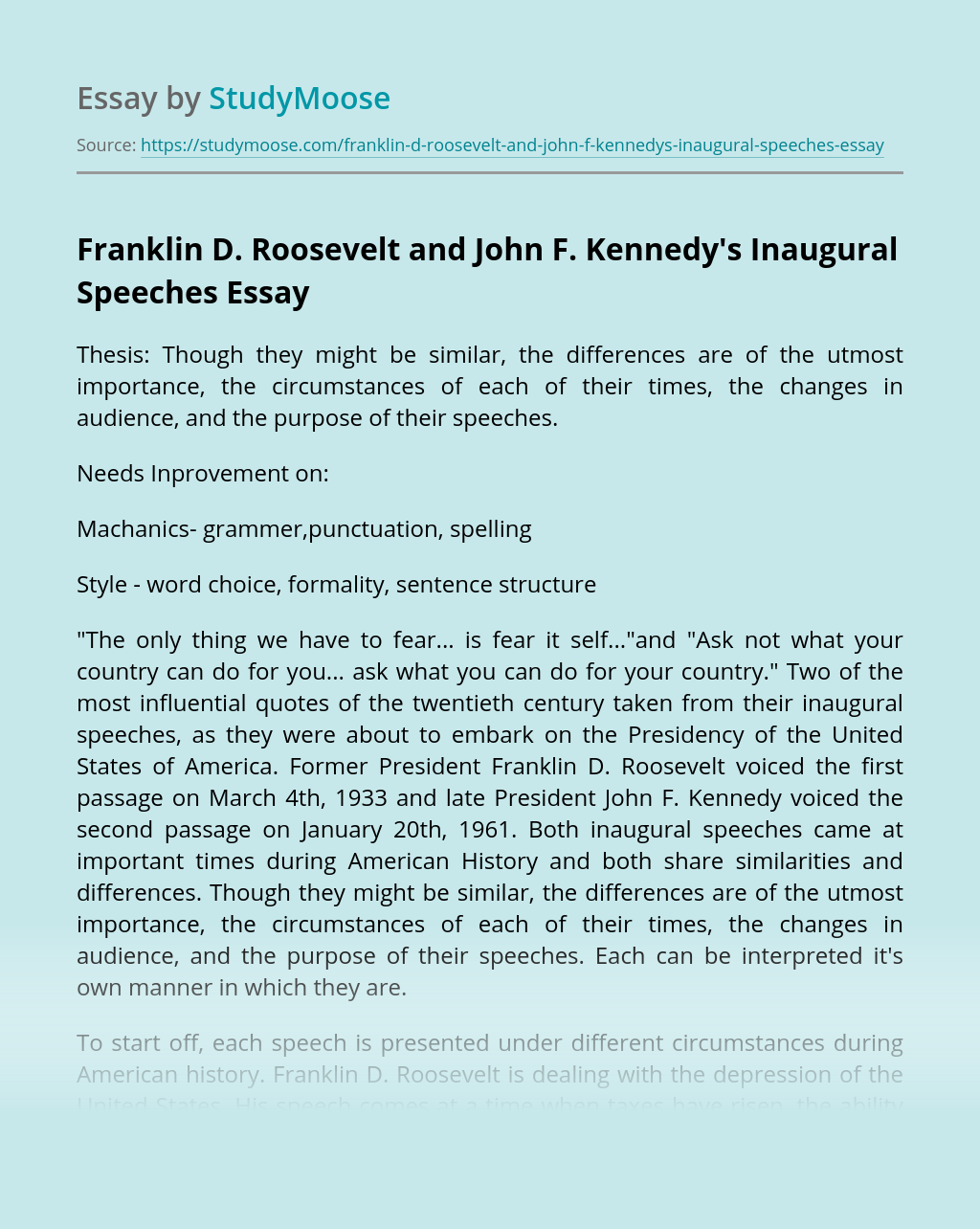 Roman Entertainment Kalyl Haider English, period 5 3-14-19 Imagine being in a colosseum with forty-thousand people watching you and a huge gladiator in front of you. It’s either life or death. Gladiator fights were one of the many things the romans did to entertain. Entertainment is so interesting and people all over the world entertain...

A discussion of the development and use of breast implants. One of the first uses of silicone in a medical implant came in the form of lifesaving tubes implanted into young children to funnel excess fluid from the brain into the chest cavity, where the fluid could be safely metabolized and excreted. Since these “shunts”...

A classic novel, “Brave New World” by Aldous Huxley process similar themes of the post-apocalypse play Mr. Burns: A Post-Electric Play due to both of them have a dystopian fictional world. A key reference that the play features of becoming a brave new world of a group of survivors living in a disastrous world of...