My First Day in College Essay

One day, while I was laying peacefully on my bed, my mother came in with a letter from Florida A&M University. I didn’t really want to speculate anything because a few days before I received a letter from another college saying that I wasn’t accepted. Nevertheless I was still excited when I opened it and even more so when I read that I had been accepted. So without much hesitation I packed up and headed to Tallahassee.

Don't use plagiarized sources.
Get Your Custom Essay on My First Day in College Just from $13,9/Page

When I arrived my mother and I took care of registration and a plethora of things you have to manage as a new student. After all the hassles of college registration were completed my mother departed for home and I was left by myself to attend college. What a great feeling! Little did I know what I had on store for the next day, my first in college.

The time was around 6:30 am, my alarm rang and it suddenly hit me that I’m now in college.

I got out of bed a little earlier than I normally would have to because I knew nothing more than which classes that I was supposed to attend. As I prepare myself for a day of school I noticed my roommate’s door was open. I went asked him a little about the bus situation, he told me that I should just walk in the morning because the bus isn’t that reliable at times. That later turned out to be very true, I have taken the bus to school since I’ve been here at FAMU.

So I began walking to class but as I walked I saw a few people waiting for the bus and I started to question my roommates theory about the bus, yet I kept walking toward campus. As I get to campus I’m in complete and utter dismay because I knew what my class schedule was but I didn’t actually know where the classes were. So as I walk pondering on where to go I happen to see a building that says housing. I walk into the building and luckily there was someone there. I look on my schedule and asked where the building was of what I thought was my first class. One of the gentlemen took me outside and showed me the building. I thank him sincerely and went about my way.

I walked all the way to the building and sat down because I noticed that I had a little time before the class started. I just happen to take look at my schedule again and I noticed that the class that I’m actually waiting for is my second class. At this point I’m very upset with myself because I asked for the wrong class. So I walked reluctantly back to the housing office hoping that they would help me again. As I walked back I’m thinking to myself “I hope they’re not too busy to help me”. When I get back into the office luckily it was a different person there so I ask them were this building was. She told me but she was very unclear and I wasn’t sure what she was talking about. Her almost exact statement was “It’s near the gym”.

I wasn’t sure if the gym had rooms in it or what. So as I go toward the gym and a guy asks me where a class was, I say with a confused look on my face “I don’t know” so he asked somebody else and they helped him out. At one point it sounded like we had the same class so I followed him. This class was actually in the gym, so I stood there for a while and I overheard somebody saying that it was an aerobics class so I left in search of my class yet again.

Next I leave that class to find somebody else to help me out a little. I find someone and although he was very vague on giving directions also I managed to find the class. Remarkably I still managed to make it to the class on time.

Finally I took a seat and the instructor started speaking. I realized that the person who is speaking isn’t even the instructor of that class, she was out that day. So the substitute hands out the syllabus and an overview of chapter one. All in all I’d say I spent 15 minutes in that class. Thinking back, I had spent more than 15 minutes just searching for the class. As I walked toward my other class I realize that my two trips to housing where actually a good thing, because I already knew where this class was. In this class I had a very interesting teacher. He was a very loquacious man and said he didn’t write anything down on the board nor did he repeat anything, so you had to get it right the first time. After about 45 minutes of that it was time for me to go home. So walked back to my room and took a well deserved nap. That concluded my first day at FAMU.

Overall this university is a great place to further your education although, like any other institution of higher learning, it does have its faults. My first day was filled with confusion and challenges but I managed to get though it as will any other first day student. Generally I think this will be a great experience for me and ultimately it will help me in pursuit of my career dreams.

My First Day in College. (2016, Jul 06). Retrieved from https://studymoose.com/my-first-day-in-college-essay 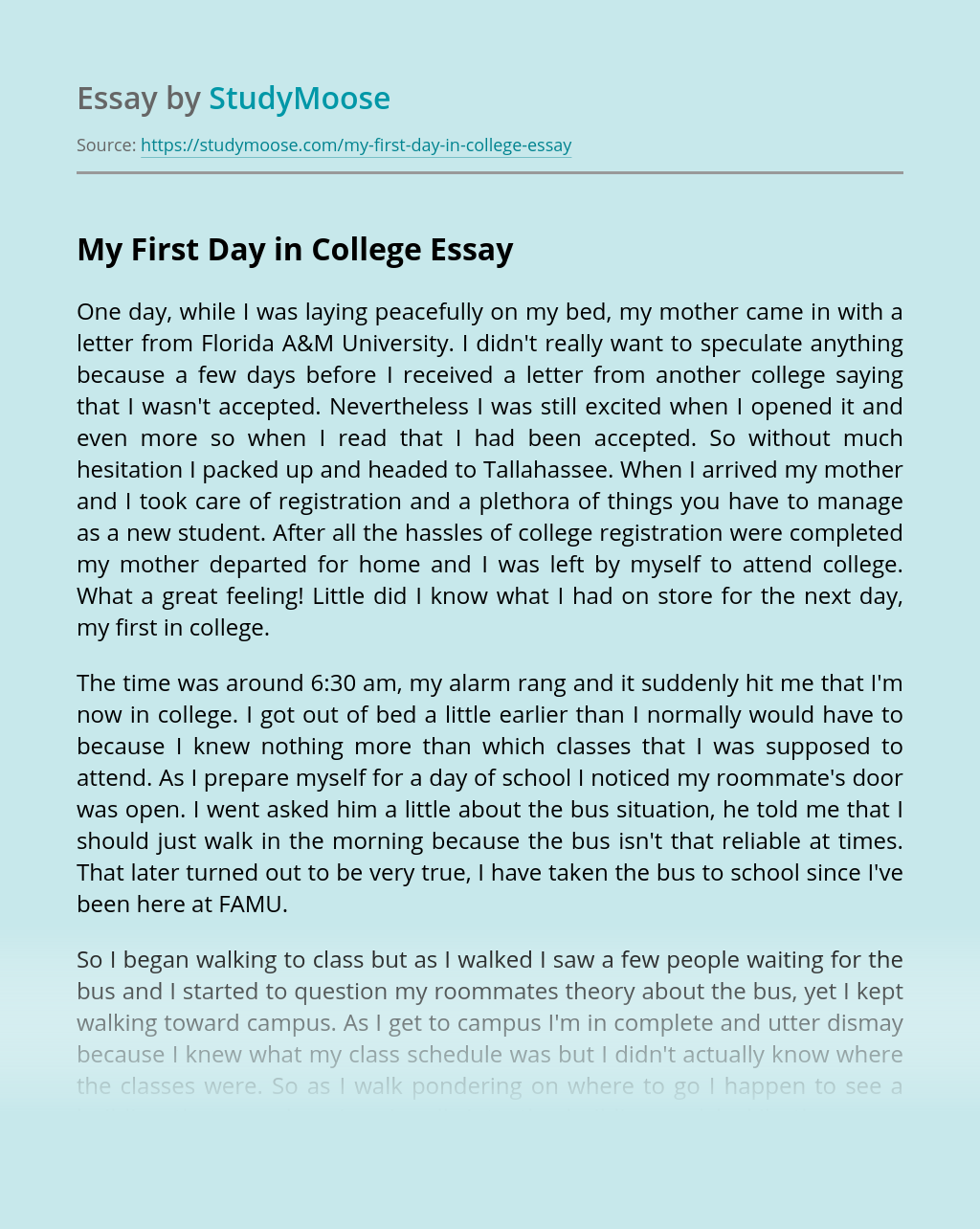 Approches to the Study of Tribal Development in India

Among India’s ‘people at the periphery’ are its tribes. Development planning in India (which took place roughly between 1940 and 1960) has attempted to foster their social and economic empowerment by focusing on various areas such as food security, health, education, employment and income generation. Tribal Development in India can be classified into the isolationist... VIEW ESSAY

I’ve always enjoyed writing. Since childhood I am fond of reading and writing based on the things I love to read. When I heard a child saying something about the solar system, I started writing imaginary things about outer space. It was a matter of jotting down what interests me at that moment. I also... VIEW ESSAY

Human service professionals have a very rewarding career. They are given the opportunity in more ways than one to provide help to those who are in need of it. While this profession can be rewarding, unfortunately, this area of expertise can be emotionally exhausting because of the many problems that the human service clients face... VIEW ESSAY

Introduction Amazon.com is a well-known multinational electronic commerce company selling various products and also producing consumer electronic products such as e-reader Kindle as well as industrial products such as cloud computing. It is the largest online retailer in the world with headquarters in Seattle, Washington, USA. It has more than 200 million active customer accounts... VIEW ESSAY