The first inaugural address of Franklin D. Roosevelt was one that strove to lift the American people off their feet as the country entered some of it’s worst years during the Great Depression. One of Roosevelt’s strong advantages during his address was his ability to relate to the very real concerns of the everyday American citizens. With pressures of the failing economy facing the President-elect, he delivered this speech, addressing the nation about his plans for a New Deal.

Don't use plagiarized sources. Get your custom essay on
“ Roosevelt’s First Inaugural Address During The Great Depression ”
Get custom paper
NEW! smart matching with writer

Roosevelt made his first point in his address by stating, “…the only thing we have to fear is fear itself.” This statement later became one of the most famous Presidential lines in all of history. The purpose of this statement was to remind the nation that for this country to witness victory, support and understanding from the people needs to be present. He is explaining that this “unjustified terror” needs to be contained so that the nation can be focused on repairing and advancing upon these needed efforts and failed economic state.

The next point Roosevelt goes on to explain is that most of the common difficulties facing the country at the moment, only concern material things. One of the increasingly dangerous problems that Roosevelt emphasizes is the amount of unemployed citizens facing the stressful and relentless pressure of not knowing whether their families will survive through the next week. The final point that Roosevelt makes is that even in this time of great despair, there is still much to be thankful for and that the future remains bright for all Americans.

He states that, “Happiness lies not in the mere possession of money; it lies in the joy of achievement, in the thrill of creative effort.” With this quote, he portrays his deeper message of his speech: As long as the hope inside the hearts of the American people sustains, there is still a chance for the country to see success once again. What makes Roosevelt’s address strong is not only the message he provides for the American public to stay strong through this difficult time, but also the rhetoric strategies he uses.

Roosevelt uses the rhetoric device, mood, as he explains that, “Values have shrunken to fantastic levels; taxes have risen; our ability to pay has fallen;…farmers find no markets for their produce; the savings of many years in thousands of families are gone.” In creating an environment made up of people in a like state of mind, Roosevelt creates a sense of unison and feeling of companionship. Roosevelt also uses this main topic for the mood of his entire speech; detailing the hopelessness that these families feel during this crucial time. Another great rhetoric device that Roosevelt utilizes in his speech is that of religion. In the closing statement of his inaugural speech, Roosevelt asks that, “In this dedication of a Nation we humbly ask the blessing of God. May He protect each and every one of us. May He guide me in the days to come.”

His reference to God was added in an attempt to bring together the American people even in the greatest despair by using the topic most relatable for people, especially at this time. Roosevelt also declares that, “These dark days will be worth all they cost us if they teach us that our true destiny is not to be ministered unto but to minister to ourselves and to our fellow men.” Not only has he successfully engineered his speech in a way that puts audience members in the same state of mind, but he also goes on to enlighten these very same people to further instill hope and pride. Not only is this an effective rhetoric in his speech, but it also portrays his unfailing leadership abilities.

Roosevelt uses diction to help convey his true character to the public. He creates a grandfatherly-like persona for himself in that he not only inspires greatness out of Americans, but also a sense of unity. His use of diction, such as repeating the words revive and support, to unite the people and to emphasize his point of keeping that hope alive. Roosevelt uses these rhetorical strategies brilliantly in his speech to express unity within the country is vital during these dark times. Franklin D. Roosevelt’s first address is one to be acknowledged as a powerful reminder to the American people that there is still hope for this country. Roosevelt was successful in his address to bring spirit and life into the hearts of the public and ensure victory for the nation. 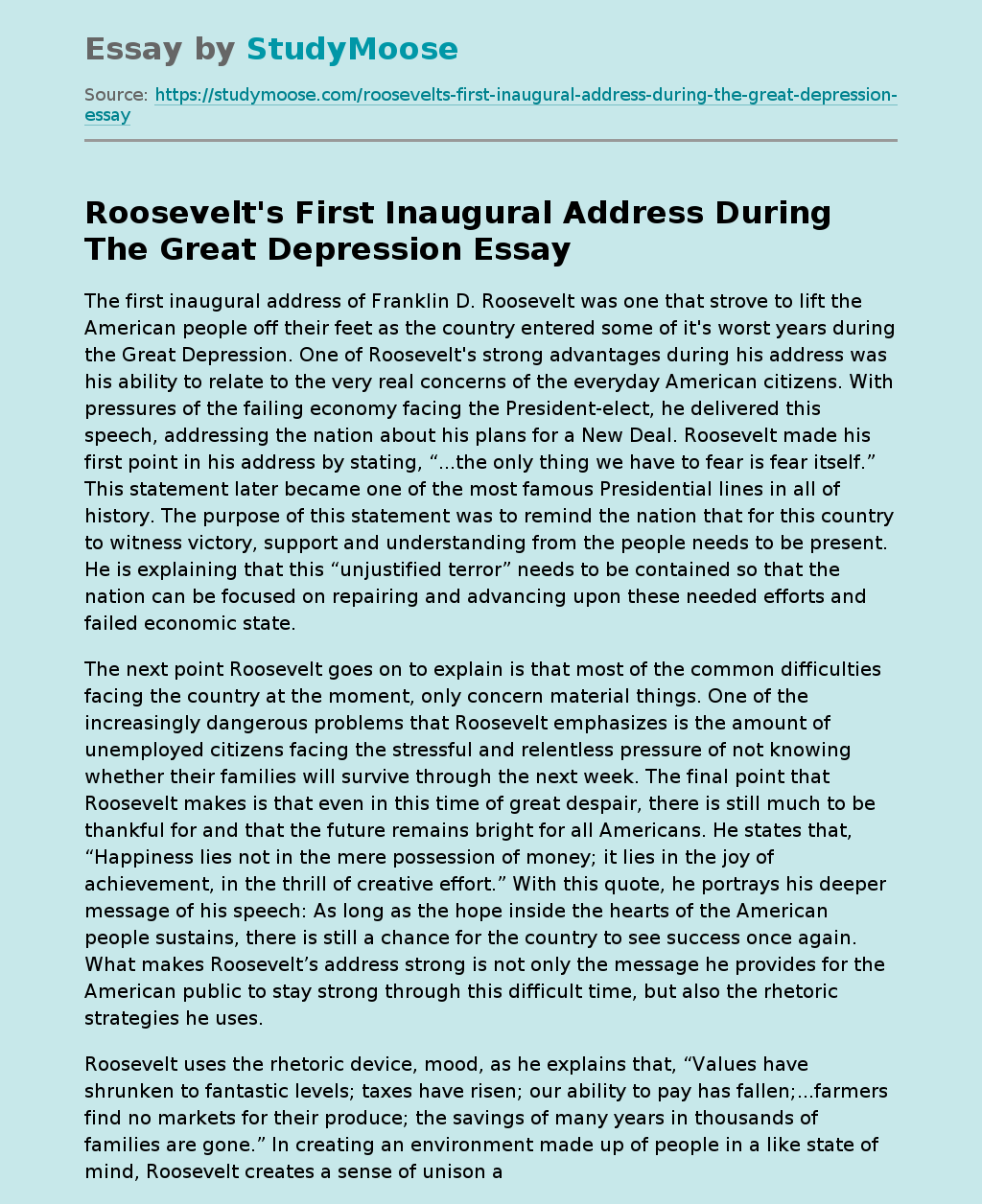