Karen Wagner World Mythology September 27th 2012 Essay #1 Herakles, or more commonly known as Hercules –according to Disney– is probably one of the most popular myths people have seen or heard, but could Herakles’ myth follow Joseph Campbell’s Hero myth list. Carl Jung defined an archetype myth or Jungian archetype as a pattern of thought that can be translated to “worldwide parallels” (“The Columbian Encyclopedia”) that the human race experiences as a culture or an individual. The myth of Herakles includes parts that compare to the Hero Archetype, but there are also parts that do not fit the archetype at all.

Joseph Campbell’s list of myths for the common hero includes a list that does and does not relate to the story of Herakles. Herakles’ journey begins from the shared birth from his mother Alcmena, father Zeus and half-brother Iphikles. Hera (Zeus’ wife) decides to take revenge because of the affair Zeus had with Alcmena for Herakles. One the morning Herakles was supposed to be born Zeus had made a previous oath stating the son of his bloodline through Pereus who was born that morning would rule Mycenae.

Hera made sure Zeus swore to this and sent down the goddess of childbirth Eileithuia to slow the birthing process. A sly serving girl named Galanthis had told the goddess of childbirth that Alcmena had her twins, once Eileithuia’s guard was down and so was her spell. Alcmena bore twins and Herakles was not the first born, one was the son of Amphitryon and the other Zeus.

Hera decides to take action by putting snakes in the twins’ crib in hopes to “destroy Zeus’ latest offspring” (Martin 148), while Iphikles only wailed, Herakles decided to strangle both snakes to death, identifying the true son of Zeus.

Amphitryon stated, “well, that one’s not my boy” (Martin 148). Herakles grew up quickly, learning his new found strength through his human father and other relatives. His first official voluntarily task was to eliminate the lion with impenetrable hide from Mt. Kithairon. Once the beast was defeated, Herakles skinned the lion and wore his mane and head as a trophy and as a form of protection (Martin 153). Herakles continued doing many labors for different people throughout a large portion of his life; he lay with many women, and marries a few as well.

Herakles did some wrong doings and towards the end of his mortal life he dies and becomes immoral, forever to live on in myth. Joseph Campbell’s monomyth list for mythological adventures magnifies the formula described in the rites of passage: Departure—initiation—return. Campbell’s list for the hero archetype can be compared to Herakles, while other parts do the opposite. The first stage of the hero’s’ journey is their birth; Campbell goes into explaining that the birth involves “fabulous circumstances surrounding conception, birth, and childhood” (Campbell).

Herakles’ birth could be seen under fabulous circumstances, an affair, another child, and two dead snakes on the first night; Campbell’s second stage is the “Call to Adventure” (Campbell), Herakles whilst working on his human father’s cattle ranch heard news of a lion killing the family cows, he volunteers to rid the beast and is successful in the end. Herakles had helpers throughout his journeys, such as Apollo’s grandson Eurytos teaching him archery (Martin 150) or Atlas assisting Herakles in getting the Golden Apples as one of his labors, but not from a specific being or person alone.

This being a piece of the myth that doesn’t exactly fit into Campbell’s list but can still compare. Campbell’s fourth entry on the list “Crossing the Threshold” somewhat relates to Herakles’ story in that he does travel 30 days to defeat the mother of all lions, another with impenetrable hide. Campbell’s crossing the threshold entry explains that the hero must undergo a task or event that takes the hero from everyday life into the “world of adventure” (Campbell); this could be something small from traveling to a cave or traveling for 30 days.

One of the major parts of the myth of Herkales is his love for labors he provides for his people, this definitely relates to Campbell’s work, in that his number five explains the tests the hero must go through, involving a series of monsters and traveling to different worlds and each conquered task increases said hero’s ability to overcome even stronger encounters he will face. Campbell’s number six on his list goes into the helpers the hero will encounter through his journey, this also relates to Herakles.

There were parts in his myth where Herakles needed assistance, for example when Herakles wanted to get the golden apples as one of his labors, he asked Atlas to go and he would hold up the heavens until he returned, even though Herakles sort of deceived Atlas in the end, he was still of assistance to the hero. The climax and final battle of Herakles involved his attempt at sacrifice and a struggle to continue living. He was given a cloak that was accidentally poisoned by his wife Deianeira with a previous enemies’ blood that mixed in with the blood he dipped his arrows from one of his labors.

The cloak began to tighten around the hero and poison him; he sought revenge on his wife to discover she already killed herself in learning what she had done. Herakles’ myth doesn’t have a happy ending like Campbell’s list basically says in 9, 10, and 11, Herakles’ dies to live on forever immorally, or in this case actually passed but his fame lives on, his story is continued being told and he is recognized as a Greek hero, without any sort of “elixir” Campbell mentioned in his list, feasting with the gods and his god parents, Zeus and Hera (Martin 179), the mother who was trying to rid him from the beginning.

Campbell’s list is to describe how a hero myth translates to actual events and situations people encounter in their lives while growing up, there is an underlying meaning to each situation that happens to the hero. While some parts did relate to Campbell’s list, overall Herakles’ myth strays away from following his list, although there are parts that do relate, the myth is still completely different from Campbell’s interpretation and Jung’s archetype definition, giving Herakles his own myth and his own journey that’s not as cliche from the rest of the myths in the world. 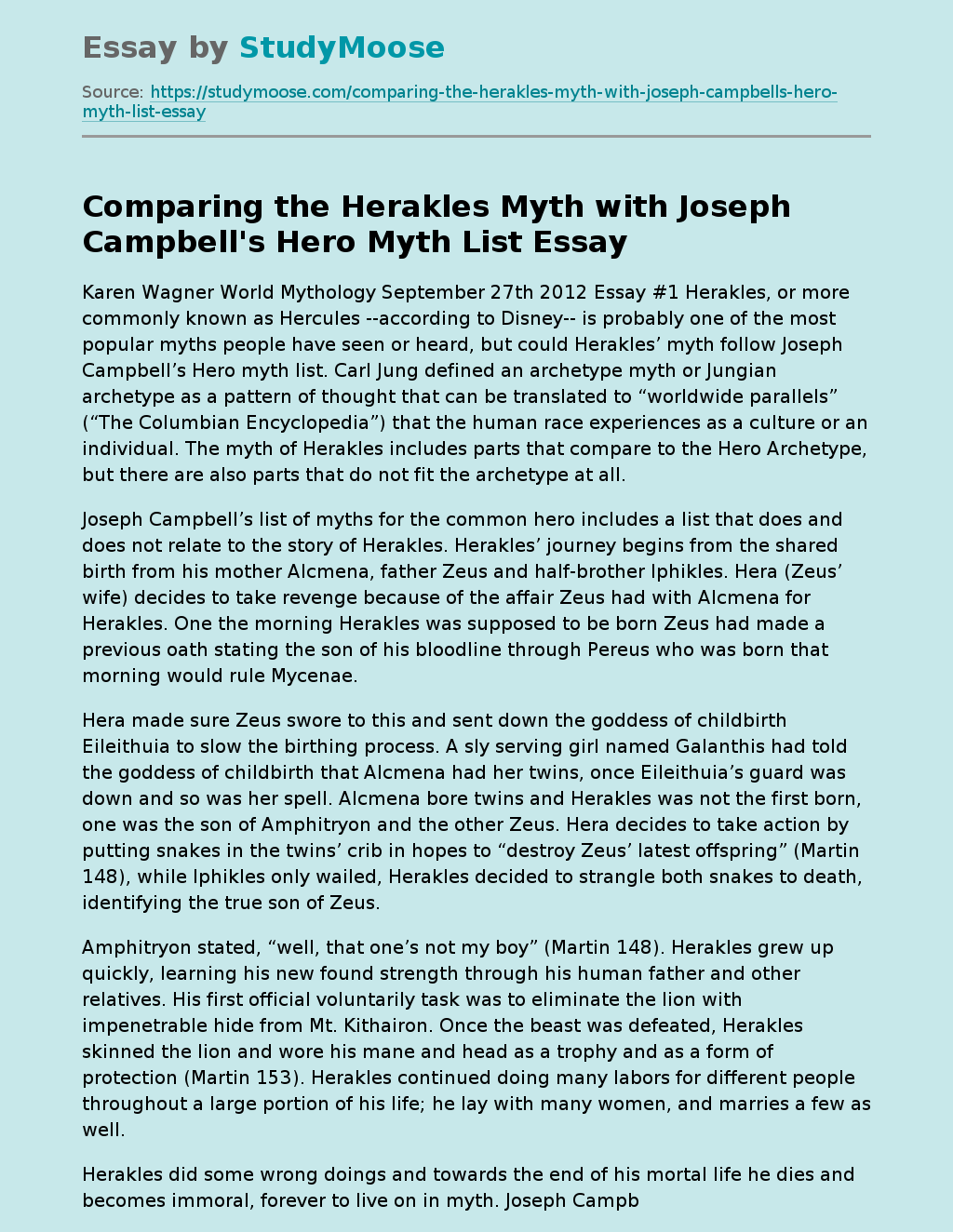