Challenge is a major theme in the novel 'The Messenger'

Challenge is described as a difficulty in a job or undertaking that is stimulating to one engaged in it (dictionary.com). Markus Zusak’s ‘The Messenger’ constantly refers to this theme by putting the protagonist, Ed Kennedy, through challenges that will test him physically, emotionally and intellectually; one just as challenging as the next.

One of the more physical challenges that Ed faces is his encounter with the Rose boys. Daniel and Gavin Rose, who are brothers, have a tendency to fight a lot and really take each other for granted.

Don’t waste time
Get a verified writer to help you with Challenge is a major theme in the novel ‘The Messenger’
Hire verified writer
$35.80 for a 2-page paper

Ed’s mission is to try and help them realise that they actually do love each other and will always be there for one another. In order to achieve this, his plan was to pummel Gavin Rose so badly that his brother would come to his rescue. Sadly, for Ed, his plan worked and when he sent word back to Daniel that he had beaten his little brother Ed received a serious beating.

While beating him, Daniel Rose threatened “Teach you to mess with my brother” (p.192), which is a positive because it proved that this mission was a success and that all the physical pain Ed had to go through was worthwhile.

Trying to decipher the meaning of the message written on the ace of clubs, ‘Say a prayer at the stones of home’, proved to be quite an intellectual challenge for Ed. Decoding this message required him to unlock some childhood memories of his and forced him to really think hard.

At first he was completely lost, asking, “How do I find a place that has no face, and nothing to point me in the right direction?”(p.121). Fortunately he found the sign he was looking for and successfully completed his challenge. Undoubtedly, one of the most taxing emotional challenges Ed had to endure was finding out who the messenger was. From day one, Ed was tormented. Every day he would wonder who was behind all of the messages and, why this person chose him.

Even finally meeting the person who was sending these messages to him didn’t answer all the questions that he had been asking. Instead, it raised new questions, and most importantly, Ed was left feeling more emotionally upset and confused than he ever had been before. During this encounter, the messenger confessed to everything. He confessed to killing Ed’s father, organising the bungled bank robbery, instructing the man to brutalise his wife, and many more. To provide further evidence, he also displayed the book that he had planned everything in, which included the conversation that they were having at that moment. This made Ed feel desperate and doubtful. He did not know what to do with himself anymore. Reassuringly, the messenger said “Keep living Ed… it’s only the pages that stop here.”(p.383)

The question needs to be asked whether or not this was the best way for Ed to grow up as a person. Although it all turned out well for Ed, it easily could have gone the other way and scarred him for life; which is a very important point to consider. Thankfully for him, Ed walked away from this experience with a better image of himself. He used to see himself as being in the shadow or ‘dark’ when compared to his brother, Tommy. “We sit on the front steps, which are half in shadow, half in the sun. As it happens, I sit in the darkness and Tommy sits in the light. Quite symbolic really.” (p. 305) This was how Ed saw himself prior to this year. However, after going through all the challenges he faced, he came out the other side with a positive image of himself and a feeling of accomplishment.

The physical, emotional and intellectual challenges Ed faced were equally difficult. Comparing one to the other would be like comparing a dog to a giraffe. They are completely different. Everyone has their own opinions and viewpoints. What one person may see as challenging, another would see as a walk in the park. Similarly, there is no definitive answer as to which of the challenges was the most testing; they all had their own, unique challenges within themselves.

Challenge is a major theme in the novel 'The Messenger'. (2016, Mar 25). Retrieved from http://studymoose.com/challenge-is-a-major-theme-in-the-novel-the-messenger-essay 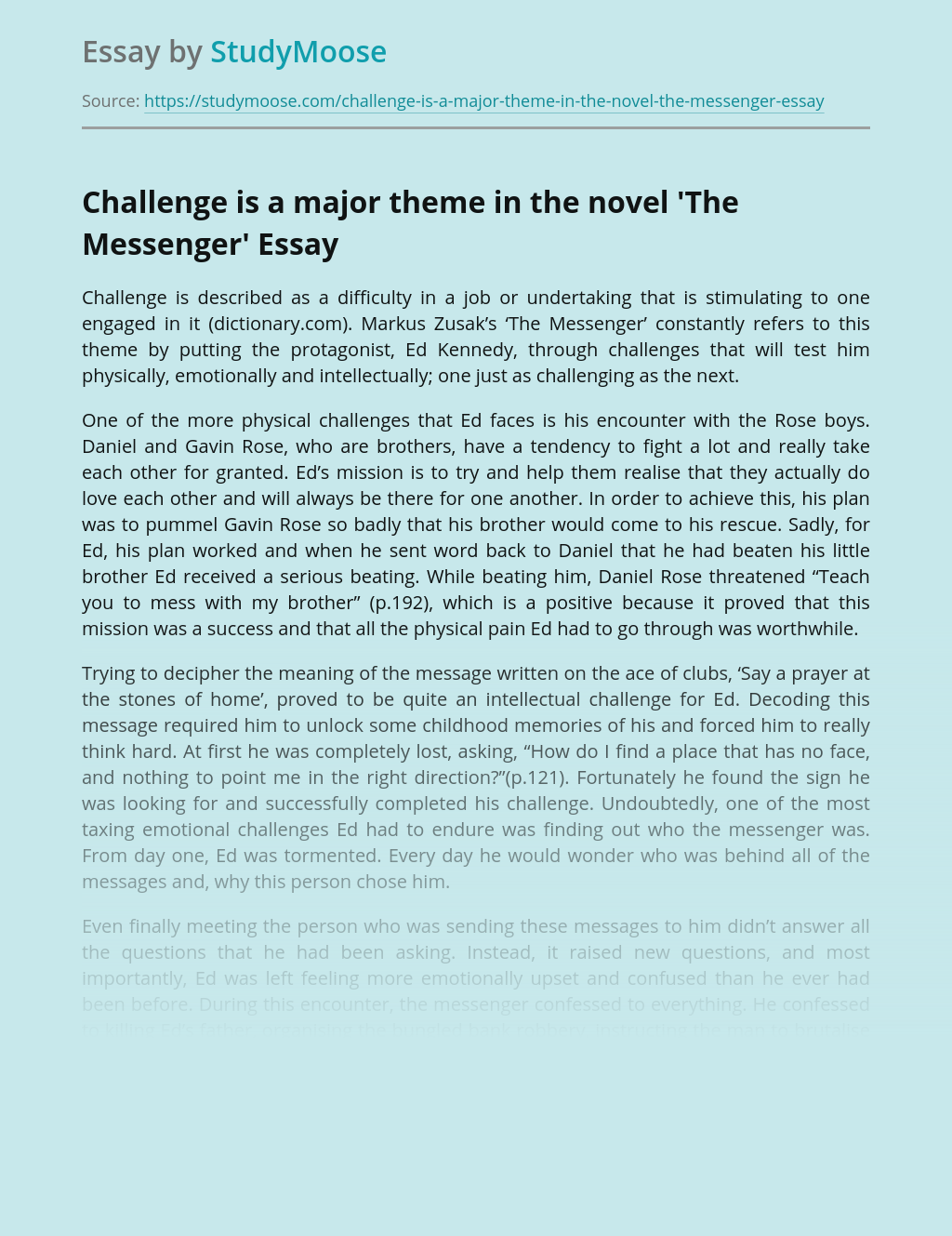 Don’t waste time
Get a verified writer to help you with Challenge is a major theme in the novel ‘The Messenger’
Hire verified writer
$35.80 for a 2-page paper
Stay Safe, Stay Original