Analysis of The Book Thief by Markus Zusak

The Book Thief by Markus Zusak illustrates a wide array of details from around World War 2. Zusak shows off his intellectual abilities by portraying severe that are somewhat graphic in nature. The setting in which he sets this novel is a very hard time in world history. Nazi Germany was a horrendous place to be during the time, but when Jews were involved things got worse. This bestselling novel is an accurate depiction of the hardships, and the daily life of many facing this time.

Don't use plagiarized sources. Get your custom essay on
“ Analysis of The Book Thief by Markus Zusak ”
Get custom paper
NEW! smart matching with writer

The story line follows a young girl as she deals with rough times, that isn’t just the war going on around her. When her family takes a toll, her world flips and she turns to books, but books are hard to find so she turns to other means of acquiring them. Later, she gets a surprise that she couldn’t even expect.

The beginning of the novel starts out with the death of Liesel’s brother.

Her brother passes on a train bound towards Munich, Germany. The narrator states, this is the first time he saw the book thief. The book thief got her name from when she stole a gravedigger’s book that was partially covered in the snow when she got off the train. When she arrives at her new foster home, she begins to learn how to read from her foster dad, Hans. This is where her fascination with books really took hold. She began learning to read with the book she had stolen from the gravedigger.

This was where her book thievery really started, later she began stealing from Nazi book burnings and even the mayors’ wife’s personal library. Her first accounts of thievery were random, but as it continued she started stealing books that fit her more. This shows just how far people in this time were willing to go for something they wanted.

Zusak portrays the hardships of just a few people in this novel, but they weren’t the only people facing this type of cruelty. Liesel is an orphan; her father was never around, and her mother handed her over to her foster parents. When her brother died she really had no family left. Her new foster parents, Hans and Rosa Herbermann, weren’t much but they were what she had. Hans wasn’t much for talking but he could play the accordion well. Rosa does the laundry for the more well-off people in town. This is how Liesel gained access to the mayor’s library. Liesel finds a new friend in a neighborhood boy named Rudy. Rudy had a yellow shade of blond hair and was very fond of Jesse Owens. A main point of this novel is when a Jew, Max, shows up at their doorstep. Max is the son of one of Han’s friends from World War 1, when he passed Hans promised his widowed wife that he would help her in any way. He let Max stay in the basement. This is an extremely dangerous decision that could have tremendous consequences on the whole family. Liesel later forms a bond with Max and they begin to become good friends.

Max wrote her a book about his early life and his travels to the Herbermann’s house. He wrote it over the pages of Mein Kampf which she could see through the words. When one learns that death is the narrator, it really is a marvel. The way Zusak conjured up death narrating the novel really shows his talents and just how much of a genius he is with words. Death is shown as lonely and that he follows people, even children. He has time to contemplate the human nature and conjure ideas about why they do what they do. This is a very accurate depiction of the very nature of the setting of this novel. Kids weren’t far from death and never knew what was going to happen next, along with adults in the same way. The way Zusak shows in words the day to day life of people in this time is a writing feat that only someone with Zusak’s talent and understanding could accomplish. The descriptions of the parades done by German soldiers and the beatings that took place to ordinary German citizens just trying to help really sheds light on how death followed everyone, not just the Jews.

The writing styles Zusak uses keeps the book from becoming depressing and boring. The descriptions he portrays utilizes the brain and vividly paints a picture in the mind. He explained that he was a Jew in upbringing, in blood, but also that Jewry was now more than ever a label, a ruinous piece of the dumbest luck around. (pg. 216) This quote from the novel shows how the Jews felt about the situation they faced. The way the quote strikes the mind and paints a vivid picture of the feeling that he had has he said this line. This is just one of the many ways Zusak used his amazing skills to really capture the full experience of the time. He took a last sad glance at the man who was kneeling now himself, whose back was burning with four lines of fire, whose knees were aching on the road. If nothing else, the old would like to die a human. Or at least the thought that he was human. (pg.395) This is a very rich look into the mind of the Jews being prosecuted, they were beginning to wonder if they were even human. Zusak out did himself when he wrote this, being able to read into the mind of the Jews and what they were feeling is a tremendous act of writing that he really captured spot on.

Analysis of The Book Thief by Markus Zusak. (2021, Nov 20). Retrieved from https://studymoose.com/analysis-of-the-book-thief-by-markus-zusak-essay 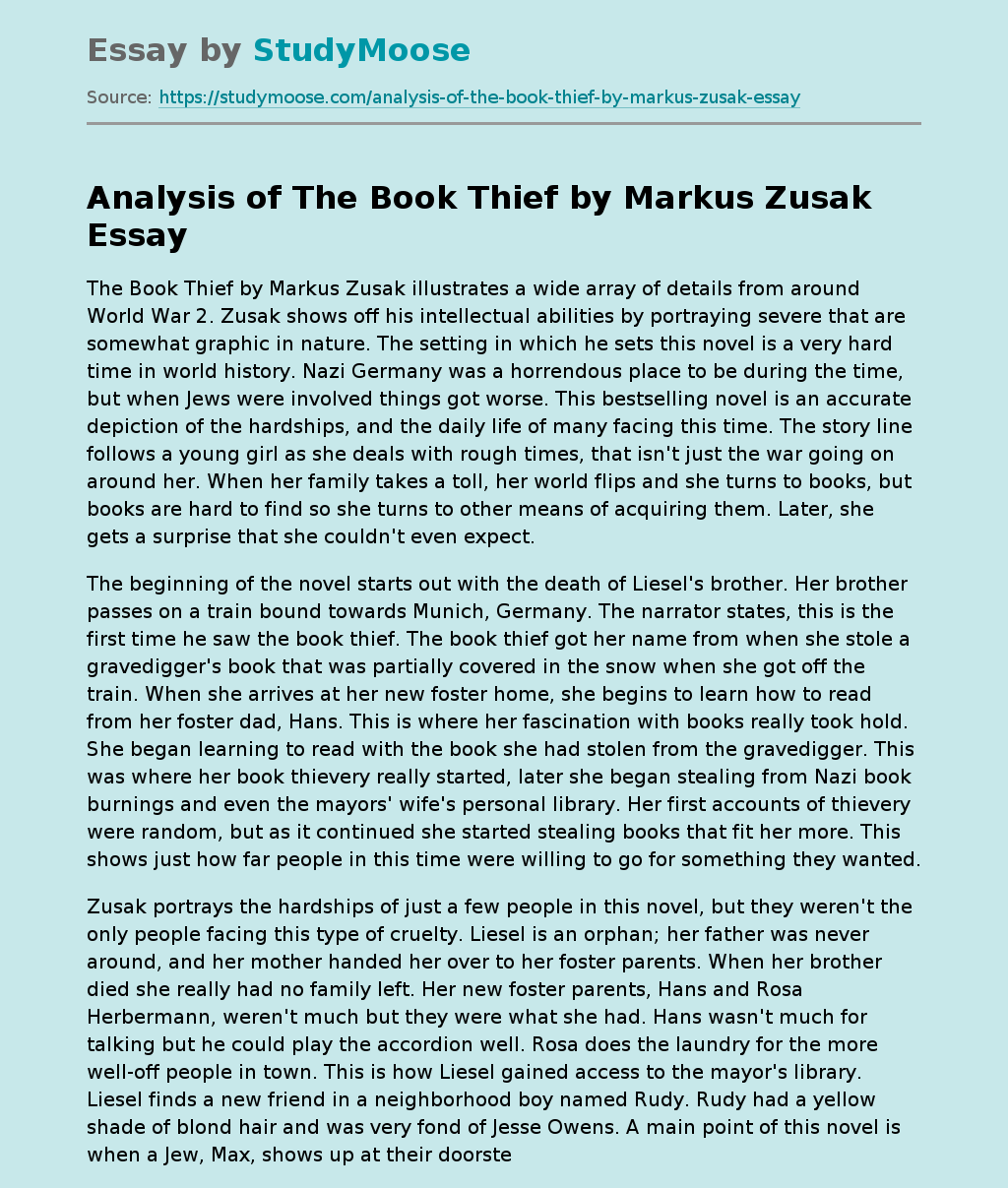