The Personification of Death in The Book Thief, a Novel by Mark Zusak

The Book Thief is a successful book due to its original plot and unique writing techniques. It is a story about a young orphan during the Second World War and her journey. A distinctive feature of this story is that it is being narrated by a personification of death. At the mention of death it is only natural to feel uncomfortable. But Death, as the narrator, shows a variety of traits relatable enough that at times we even forget our fear.

Don't use plagiarized sources. Get your custom essay on
“ The Personification of Death in The Book Thief, a Novel by Mark Zusak ”
Get custom paper
NEW! smart matching with writer

Other times, it is hard to understand what he is describing or going through because we have and will never experience such things. These may have been effects the writer wanted to achieve in writing his story as told by Death. When the story begins, the reader is unaware of the narrator’s identity.

We get a first hint when he gives us the ‘Small Fact’ and ‘Reaction to the Aforementioned Fact’. He says ‘You are going to die … Does this worry you? I urge you – don’t be afraid.

I’m nothing but fair.’l This is an indirect revelation that confuses the reader. It creates the first link that will later be reinforced. However, not once does our narrator directly tell us who he is. An example would be when Liesel’s brother died, Death explains that “The second eye jumped awake and she caught me out, no doubt about it.”? This has two implications: either he is a literal murderer killing her brother, or he is Death coming upon the youngest Meminger.

With our previous knowledge it is evident that the second option is more probable. Examples as such can be found throughout the entire novel especially at times when the narrator side tracks to talk about himself rather than progressing with the action.

In addition to the already distinct identity of the storyteller, he is also happens to be an omniscient narrator. The definition of an omniscient narrator according to the Cambridge Dictionary is ‘the voice in which a story is written that is outside the story and that knows everything about the characters and events in the story’. As opposed to the usual all-knowing narrator, Death makes his audience aware that he has heard the story beforehand. One way that this can be seen would be whenever he switches between the first person’s point of view, and a closed third person’s point of view. When he speaks in the first person he describes his version of the story, but when in the closed third person he describes all the main characters’ thoughts and emotions.

An example of this shift is found in the excerpt ‘Frau Holzapfel sat with wet streams of wire on her face. Her son was dead. But that was only half of it. She would never really know how it occurred, but I can tell you without question that one of us here knows… What I see is the Russian winter and the snow falling from the ceiling, and the fate of Frau Holzapfel’s second son.’4 Here he starts in the third person describing what Frau Holzapfel is going through and then changes the narrative by giving his version of the story. Another way that Death makes the reader aware of his knowledge is just by flat out giving away upcoming parts of the plot. This occurs less often than the previous technique but it is nevertheless present. This can also be seen in the previous excerpt or in when it says ‘… Recollections like those merely remind me that he was not deserving of the fate that met him a little under two years later.’s which shows that he knows when and how Rudy will die. The reader had no way of knowing this and Death spoils it for us as a way of teasing us.

The reader becomes keen to keep reading so that they can find out how each thing comes to be and why. Next, Death, being a personification, shows human emotions. According to one study there are four basic human emotions: happiness, sadness, fear, and anger. Death expresses each of these at different stages in the book making the reader feel like they can relate to him. Sadness can be seen whenever he talks about his job. The example where it stands out the most would be when he is taking Rudy’s soul. ‘He does something to me, that boy.

Every time. It’s his only detriment. He steps on my heart. He makes me cry.” These words are shocking to the reader because they usually know Death as “heartless’. A sense of pity may overcome seeing him go through unimaginable things and, just like any other person, not always being able to put on a strong face. Fear is extremely present at the very end of the book. The last line is ‘I am haunted by humans’ is a direct demonstration of this emotion playing a role in Death’s character amongst others. Anger is revealed at the mention of war that raises the amount of work for him. He is obviously frustrated by the increase which neither rewards him extrinsically nor intrinsically. “To me, war is like the new boss who expects the impossible. He stands over your shoulder repeating one thing, incessantly: “Get it done, get it done.” So you work harder. You get the job done. The boss, however, does not thank you. He asks for more” – supports the previous statement. Finally, even though it’s less obvious, happiness is present in Death’s character. Plutchik’s Wheel of Emotions 10 indicates that interest or curiosity make up a part of happiness. Therefore, we can say that when he becomes distracted from his routine because a little girl catches his attention. ‘I buckled – I became interested. In the girl. Curiosity got the better of me, and I resigned myself to stay as long as my schedule allowed, and I watched.’11 shows that, in fact, if Death wouldn’t have had this quality, there would be no story to tell. His humanity is what brought him to share his story and opinion with us and what probably became his new ‘distraction’ apart from the colors.

To conclude, we can indeed see that the writer succeeds to personify Death in a way that affects the reader. The mystery of discovering the true identity of Death puts the reader on edge, however his omniscience creates a feeling of jealousy as the reader wants the knowledge Death has. Finally, Death’s personification is so well thought out that he even expresses the basic human emotions. This makes the reader feel that they can relate to Death, maybe even to the extent of forgetting their fear. With all this any reader may be left with the questioning of having a completely wrong impression of Death and possibly having been too harsh.

My choice of book and essay question came quite easily. I started by re-reading ‘The Book Thief’ and noting anything related to my question. When it came to writing the essay, the introduction wasn’t too hard, but grouping my ideas took a bit more time. I struggled with finding fewer strong arguments that would incorporate all my ideas instead of the vague ones I had in mind. I resorted to cutting a couple of my arguments and grouped the remaining ones together. From there I could make my ideas a lot clearer and had a strong conclusion. As when reading any book, I of course acquired some new vocabulary and, for this novel, I learnt, in more detail, about the omniscient narrator. Proper citing was new to me. I had previously given credit but I didn’t know that there were different ways to do so. I do think that now I am more capable of writing longer essays, after finishing and realizing that it the word count was not an issue. Rereading the essay, I must admit that I did make some changes because I wasn’t quite pleased with the original outcome.

There are still some areas where I feel I could phrase my ideas better but I couldn’t quite find the right wording. I am quite pleased with my introduction and structure and feel I incorporated excerpts and external links in appropriate amounts. Overall, I do think that the essay seems like a lot more work than it really is. The mention of 1,200 words creates the impression that it will take a lot of time and effort when actually it’s more setting your mind to it and letting the words flow because the ideas are already there after reading the book.

The Personification of Death in The Book Thief, a Novel by Mark Zusak. (2021, Sep 28). Retrieved from https://studymoose.com/the-personification-of-death-in-the-book-thief-a-novel-by-mark-zusak-essay 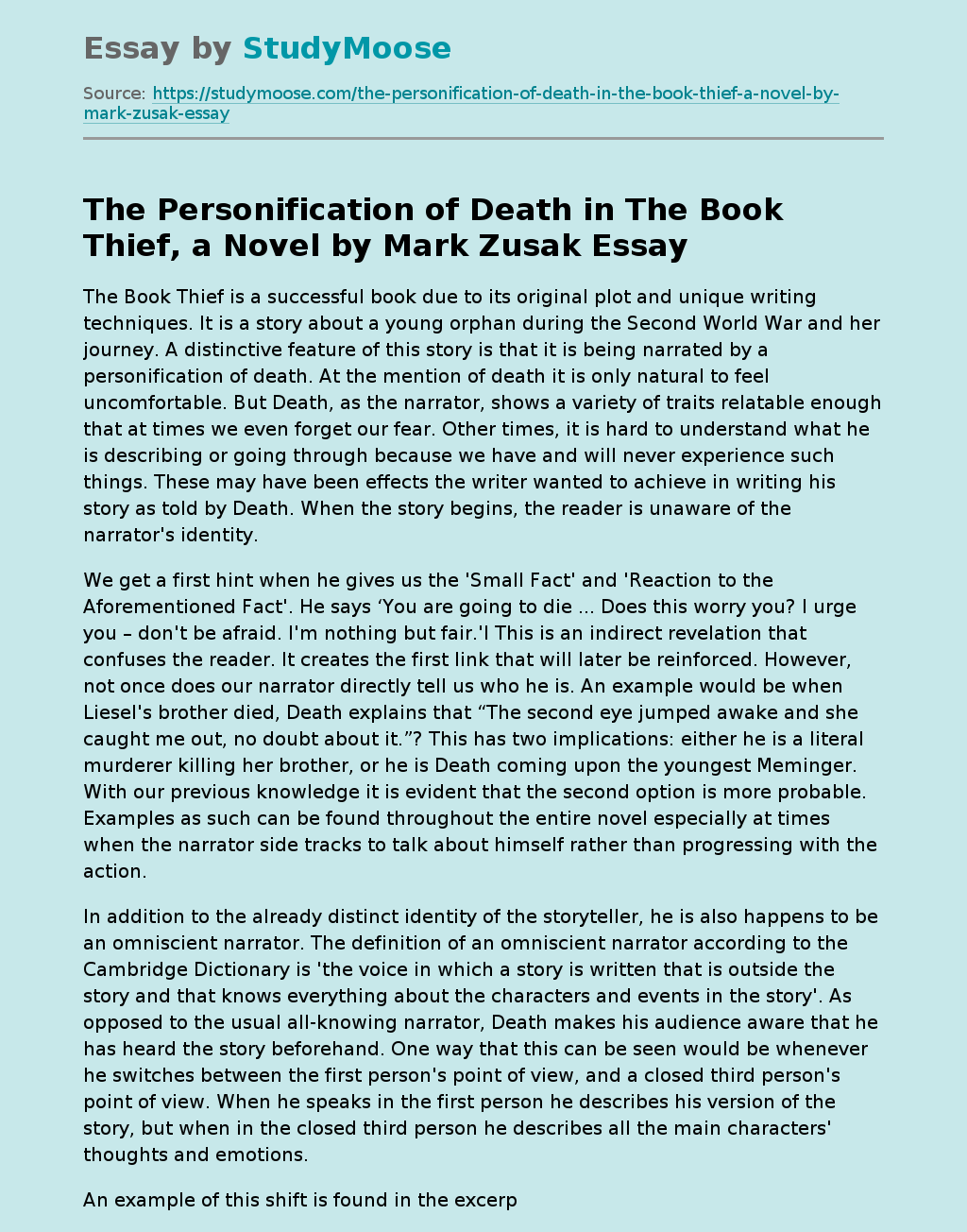