How Has the Personification of India and the Indian Woman Been Reflected in the Various Paintings of Mother India?

“I am India. The Indian nation is my body. Kanyakumari is my foot and the Himalayas my head. The Ganges flows from my thighs. My left leg is the Coromandal Coast, my right is the Coast of Malabar. I am this entire land. East and West are my arms. How wondrous is my form! When I walk I sense all India moves with me. When I speak, India speaks with me. I am India. I am Truth, I am God, I am Beauty.

Don't use plagiarized sources. Get your custom essay on
“ How Has the Personification of India and the Indian Woman Been Reflected in the Various Paintings of Mother India? ”
Get custom paper
NEW! smart matching with writer

These lines, written below the Hindu right wing organization Rashtriya Swayamsevak Sangh’s poster of “Bharat Mata”, shows how the anthropomorphic form of the nation as well as India’s cartographic form coalesce together into one single entity in the form of art. And with this paper, I will attempt to do an analysis on how India as well as the Indian Woman has been personified in the form of various paintings of the Bharat Mata in India.

Proficient in: A picture is worth a thousand words

In 1905, Abanindranath Tagore painted the above iconic image of Mother India. Clad in a saffron sari, resembling a Sadhvi, the imagery of Mother India over here depicts that of a holy woman radiating peace and calm. On observing the painting carefully, one notices the celestial nimbus behind her head, the lotus pond next to which she is standing, and the four arms each carrying an item of symbolic significance. A manuscript, a sheaf of foliage, rosary beads and a piece of fabric – I personify her here as a goddess. She emits grace, serenity on her face, conferring boons; she is the epitome of the Goddesses Sita, Savitri, Saraswati and Lakshmi.

On analyzing Nargis’ role of Radha in the film Mother India, one can see that the ideals that Radha entered her marriage can be mirrored in Abanindranath Tagore’s painting. Sita, being the embodiment of purity, Savitri, exemplarily devoted wife, and Lakshmi, the goddess of wealth and good fortune (brides are customarily likened to Lakshmi and to whom Sukhilal explicitly, and somewhat ironically, likens Radha). In the beginning of the film, we see a timid Radha, entering her marriage with the ideals of being a perfect wife, devoting herself to her husband, exhibiting loyalty and
chastity. These basic ideals don’t change throughout the film. We see her sacrificing her food for her husband and children; we see her maintaining her chastity even though she could have foregone the debt by having sexual relations with Sukhilal. As personified by the image as well, she maintains this image of being a “pure” woman, displaying devotion to her homeland and abstemiousness towards her marriage. As Sister Nivedita aptly puts it, what Tagore sees in Her is made clear to all of us. “Spirit of the motherland, giver of all good, yet eternally virgin…. The misty lotuses and the white light set Her apart from the common world, as much as the four arms, and Her infinite love. And yet in every detail, of “Shankha” bracelet, and close veiling garment, of bare feet, and open, sincere expression, is she not after all, our very own, heart of our heart, at once mother and daughter of the Indian land, even as to the Rishis of old was Ushabala, in her Indian girlhood, daughter of the dawn?”

During the independence period, there was a drastic change in the imagery of Mother India. From the pre-independence view of Bharat Mata as a serene, holy woman radiating peace and calm, the images that soon followed were that of strength, anger, wit, and innovation. Images of Gandhi being held by Mother India, Mother India surrounded by freedom fighters, Subhash Chandra Bose cutting off his head and offering it to the Mother on a platter. Even though the visuals managed to captivate the audience, it wasn’t about the art form represented – but the message.

On looking at the first image presented here, on the RSS poster, one can see how the personification of Mother India changed immensely from the passive figure that she once was. We see a woman occupying the map of the nation, giving the nation as body a very tangible female form. We have here an image which takes its meanings from a wide range of cultural signifiers: the smiling face of the goddess standing in front of her lion, looking directly into the gaze of onlookers. This particular image, very famous throughout the country, continues to look at people from posters and calendars everywhere. Aggressive and self-assured, she no longer resembles the way Abanindranath Tagore represented her.

The title Mother India immediately situates the film within the discourse of the Freedom Movement, and the film is seen to be as much about nationhood as womanhood. In the painting, I view the Bharat Mata depicted as a symbol of female empowerment – the confidence in her eyes, the lion besides her. Radha, in the film Mother India is symbolized in the same way. She is confronted by the choice to either display loyalty towards her land or let her motherly love overpower it. But she chooses her land and goes against her familial instincts to fight for it. The transition from the painting by Abanindranath Tagore’s Bharat Mata to the poster by the RSS can be seen as a vision of a new Utopia that integrates features from both societies. The traditional society, fundamentally morally sound. A woman, whose integrity never left her side. Yet this society (in our analogy, India) was vulnerable to the vagaries of nature (the west). Mother India became a symbol of empowerment. Remaining strong to her ethics, she opened herself up to modernity, letting herself become influenced by the west. As mentioned by Rosie Thomas, “Power in the new society is generated by control of both: oppression is ousted and the hazards of nature overcome with modern technology, but the purity of traditional values — symbolized by female chastity — must still bless, and ultimately legitimize, technological advance.” And Mother India did open the dam. As depicted by the RSS poster, India transitioned from a traditional Mother to that of a symbol of woman’s strength.

The final painting that I will attempt to analyze is M.F. Hussain’s Bharat Mata. A nude woman, depicted in red, spread over the soil of this country with a man observing her and the various city names strewn in the background. Unlike the previous two paintings, which depict serenity and empowerment, this depicts oppression. And probably, the one painting that captures the essence of being a woman in India – male dominance in a society where a woman has no voice, this is what the painting speaks to me. Taking references from the film Mother India, at the beginning of the film she is forced into marriage without voicing her own opinion. Her head is covered by a shroud, eyes looking down – a sad and subdued figure. She listens to her Mother-in-law without a peep, submits to her husband. When there are references to Radha and her husband being parents of sons, she just smiles.
And even after the loss of her youngest child, a daughter, hardly any emphasis is given on the emotions of the situation. The woman is also viewed as an object of sexual desire, apparent when Sukhilal makes sexual advances towards her. This shifts our focus to the objectification of a woman in Indian Society. Objectification is known to be those portrayals of women in ways and contexts which suggest that women are objects to be looked at, ogled, even touched, or used. From ancient scriptures, a revolted Sita (from the epic Ramayana) to a modern day Delhi gang rape victim, there are countless examples of how women are commoditized. Even in Bollywood, nowadays rather than celebrating a women’s sensuality, they are portrayed as an object or a toy of the Hero’s antics or to celebrate his success or his dreams. Or as a product that has been marketed by the catchy medium called media. Taking instances from the Hindu epics, in the story of Parashuram, his mother, Renuka, experiences a momentary desire for another man. For this crime of ‘thought’, her own son beheads her on the orders of her husband, Jamadagni. She eventually comes to be associated with the goddess Yellamma, who is associated with prostitution. In the story of Ram, Sita’s abduction by Ravan so taints her reputation, and makes her the subject of such gossip, that Ram eventually abandons her. In neither story is the woman actually assaulted. It does not matter. In Devdutt Pattanaik’s words, the idea of being violated is terrible enough. The idea that what is yours has claimed another in ‘thought’ (Renuka’s story) or has been claimed by another in ‘thought’ (Sita’s story) is enough to deflate honor. The personification of the Nation and the Indian Woman represented in Abanindranath Tagore, the RSS poster and M.F. Hussain’s paintings gives us a single window of insight of the various perceptions of the same. Sacredness, empowerment and oppression – three concepts depicted by three unique paintings representing the same ideology. And as it is often quoted, “A picture is worth a thousand words.”

How Has the Personification of India and the Indian Woman Been Reflected in the Various Paintings of Mother India?. (2016, Mar 22). Retrieved from https://studymoose.com/how-has-the-personification-of-india-and-the-indian-woman-been-reflected-in-the-various-paintings-of-mother-india-essay 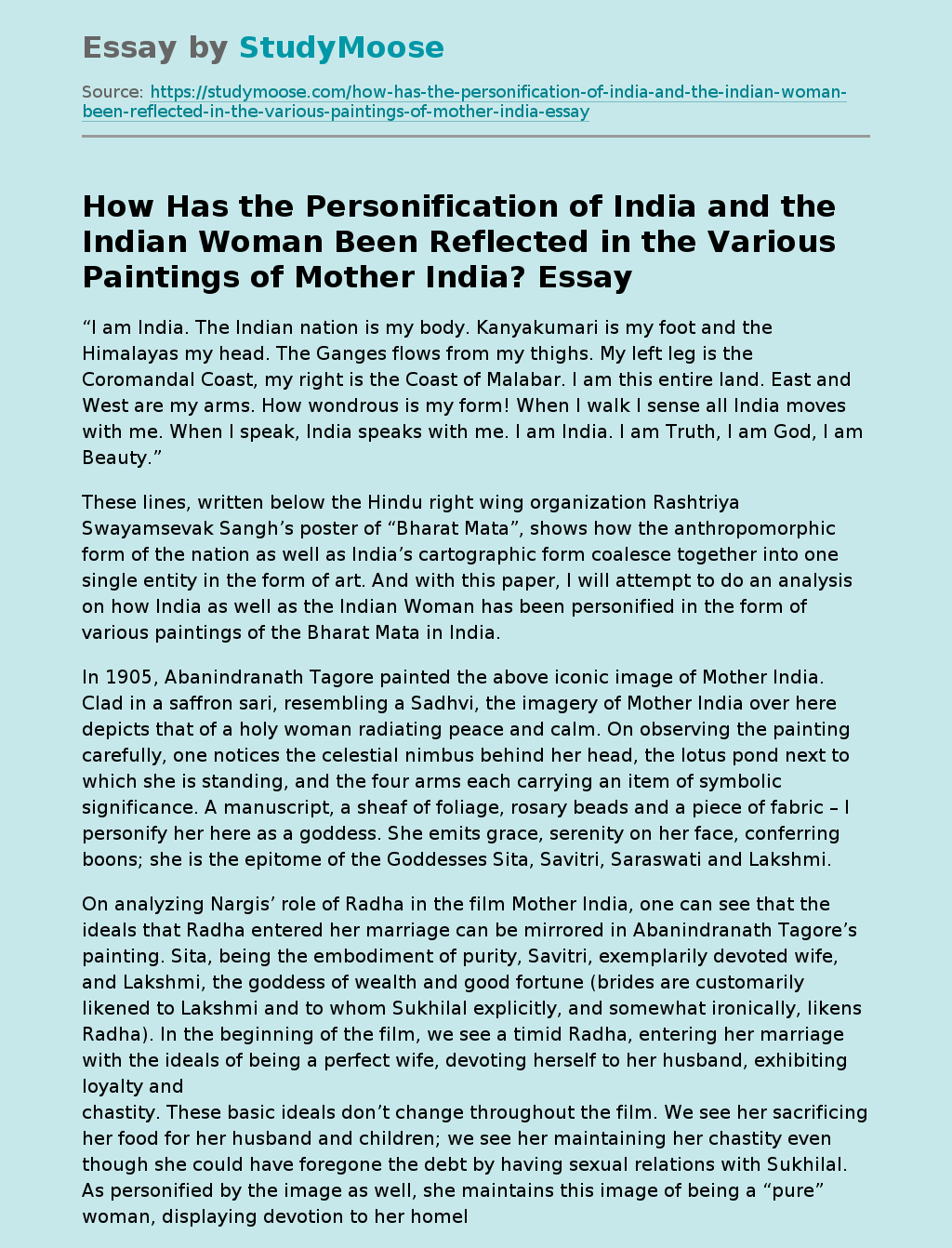