The Lascaux caves, located in the southwestern region of France, contain a series of Paleolithic cave paintings. It was founded during the summer of 1940, when a young man by the name of Marcel Ravidat, an apprentice mechanic, came across what looked like a fox hole. According to legend, this particular entrance would lead to the Lascaux manor. Ravidat, however, had to postpone the excavation until the 12th of September, when he was equipped with the proper tools. Along with Jacques Marsal, Georges Agnel, and Simon Coencas, he dug through the hole until it led to a passageway that was about thirty meters in length.

Don't use plagiarized sources. Get your custom essay on
“ The Lascaux Cave Paintings Analysis ”
Get custom paper
NEW! smart matching with writer

This is when they discovered the first of the Lascaux cave paintings in what is known today as the Axial Gallery. Altogether, the paintings they discovered within the underground passageways of what appeared to be a fox den, turned out to be a series of Paleolithic art from prehistoric times. The Hall of the Bulls, which is approximately 20 meters long, contains 130 different figures—the majority, of which, are animals.

The variety of animals that are illustrated, including bears, horses, cows, deer, and bulls, are all evidence that these animals were present during prehistoric years.

Not all of the animals are filled in. Many of the bulls consist simply of a dark outline, which is incredibly details and accurate. The deer that are painted have particularly details antlers, and one can even see the muscle tone in the bodies of the animals.

Considering the fact that even the simple outline of these animals were incredibly detailed, suggests that the artist or artists behind these cave paintings were not necessarily primitive in terms of their artistic abilities. It appears as if the paintings are created from either charcoal, clay, or a combination of both.

Analysis of the Paintings

This shows evidence of either an action scene or some sort of symbolic significance. The Passageway is unique in that its wall paintings contain both animals and symbols. These symbols include crosses, hooks, and squares; and it is not known what these symbols necessarily represent. Here, it appears as if the illustrations are also created with engraved patterns. These images appear to be much more primitive than the others within the cave. Within the next passage of the cave, referred to as the Nave, horses continue to be the most dominant animals.

There are also images of stags, bison, ibexes, and aurochs. The proportions tend to be unlike that of real life, which suggests that some animals may have been more valued or considered to be more sacred than others. There appears to have been a great amount of effort in creating one particular panel on the left, which shows a black bull. The bull is colored in very darkly, unlike the other figures. It is also much larger, and its proportions are different than what a bull may look like in today’s world.

It is possible that bulls appeared to be different during the time in which these paintings were created, or that the swelling of its belly and torso had some sort of symbolic significance. After the Nave, comes the Chamber of the Felines. Stretching to about 25 meters in length, it consists of more than 80 different illustrations—51, of which, are animals. There are 29 pictures of horses, making the animal the primary focus of the collection, as it is in the other sections of the cave.

The actual felines appear to be carved into the wall of the cave rather than darkly etched in materials such as charcoal. Their features are also more rounded and blunt than they are in today’s world. In comparison to the other paintings of bison and horses, the feline pictures are much more primitive in their technique and appearance. There are more than one thousand figures depicted in the section of the cave known as the Apse. Approximately 500 of the pictures are animals, and the rest appear to be a series of lines and symbols.

There is an illustration of a fallen stag on the left wall of the cave, suggesting that it was either killed by another animal or hunted by humans. This section of the cave is not all that clear, as the outlines of the figures are made by engravings rather than a paint-like substance. The fact that there are so many different lines and geometric symbols, including rectangles, suggest that the people who made these paintings and carvings may have had an interest in mathematics or that these shapes held some sort of significance.

Significance of the Paleolithic Era Art

Regardless of what these shapes represent, it demonstrates that the people who lived during the Paleolithic era were considerably advanced in terms of their artistic approach and their use of symbols in their art. The Shaft is the only area of the cave that depicts a limited number of figures—eight in total. Along with the presence of animals and geometric shapes, which is consistent with the other areas of the cave, this particular section also involves the picture of a human.

Since the man appears to be lying in front of a large bison, this suggests that he was either attacked or wounded by accident. It should be noted that, in terms of accuracy, the animals appear to be more detailed and realistic than the portrayal of a man, showing that more attention was paid to the illustration of animals. All of the paintings in this section seem to be created with a dark substance such as coal, which is why the outlines are so dark and detailed. Altogether, the Lascaux cave paintings prove that art may have been more advanced during the prehistoric era than some may believe. 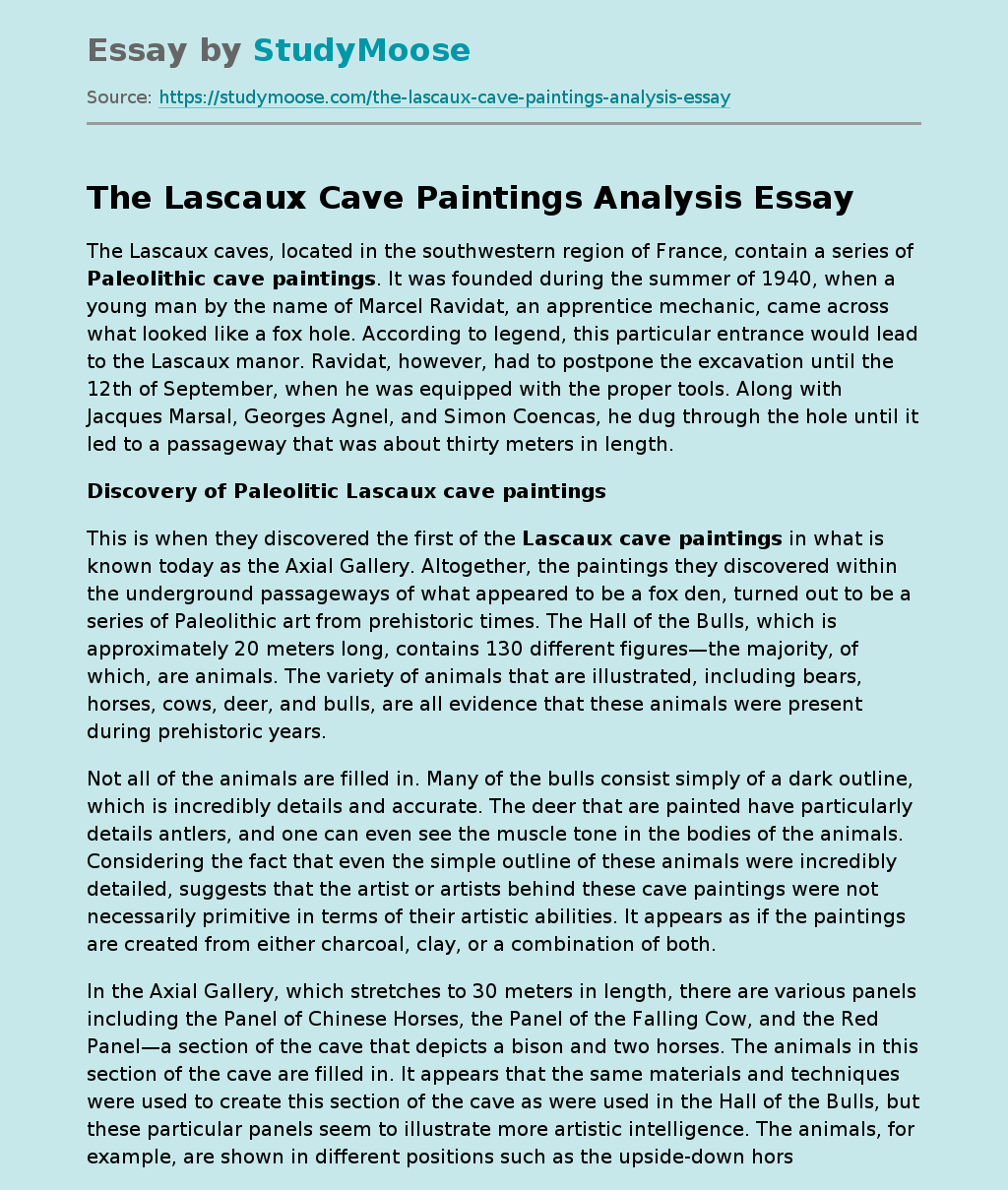