Words … words are things we use and hear literally all of the time, although they give us the power to communicate, they are certainly not as influential or manipulative as they have the ability to be. Nazi Germany is a place where the use of the immense power of combined letters is perfected. In the novel, The Book Thief, by Markus Zusak, words are used to create goodness, comfort, and sanity in a time of war. When wielded by the correct person, a strong vocabulary also has the chance to manipulate any man into changing his mind completely.

Don't use plagiarized sources. Get your custom essay on
“ The Book Thief – Power of Words Essay ”
Get custom paper
NEW! smart matching with writer

Lastly, simple conversations can even give someone the ability to live, or they can mean the end, the end of their powerful, word filled life. In this novel, due to the realization of many individuals that they have great power, words are used to strongly influence people and events. Words can influence people and events in a positive way if used correctly; their power to bring people together and comfort them is second to none.

First off, words have the ability to provide individuals with the intelligence. With Liesel’s new ability to read, she becomes a much smarter, more useful young girl; “once, words had rendered Liesel useless, but now… she felt an innate sense of power” (Zusak 147).

A younger Liesel, who is incapable of reading, does not know what is going on around her. Learning how to read gives her more knowledge, with which she is able to form logical opinions, and have more ability to grasp the evil occurring in the outside world.

The power of the words to give knowledge is the reason that Liesel is as smart as she is. Secondly, words have the ability to bring people together, and to convey a feeling of love. Hans Hubermann and Liesel gain a friendship from their nights of reading in their basement. Their relationship centred on words gives them the ability to bond greatly; “’With a smile like that,’ Hans Hubermann said, ’you don’t need eyes.’”(Zusak 68) Liesel and Hans’s relationship is the main reason that she is able to settle into her new house on Himmel St. Their love grows extremely strong, showing the massive power of words to bring people together. Lastly, words have the ability to calm people down; they can get away from what is happening around them, they are able to simply “be”. During one of the bombing raids, Liesel starts reading from The Whistler; “For at least 20 minutes, she handed out the story. The youngest kids were soothed by her voice” (Zusak 381).

In a time of peril, Liesel is able to remember how powerful her words can be. Reading words from a book about a whistling murderer – although it may not seem to calming – has vocabulary powerful enough to sooth Germans who are facing death. Powerful words have amazing abilities; they can bring happiness and joy to Nazi Germany, a place where joy is not so common. Unfortunately the novel, The Book Thief isn’t full of only powerful words used for good… what could one expect from a book narrated from death? Quite predictably, it gets darker from here. The power of words can be used for manipulation and deceit arguably more than for goodness. Using sinister, slimy words, the speaker is able to wiggle their words into the listener’s brain to get you to believe something that weaker words would never get you to do. First of all, a good vocabulary can give a person the chance to gain something that is way out of their reach, without any violence. Adolf Hitler, a man without the qualifications, manipulates his way into being the leader of Germany; “Yes, the Fuhrer decided that he would rule the world with words. ‘I will never fire a gun,’ he devised. ‘I will not have to’” (Zusak 445).

The only reason that Adolf Hitler comes to power in Nazi Germany is the genius and power of his words. He never utilizes the brute force of a gun; he simply wields the ability of his words to get what he wants. Hitler’s use of the manipulative power of words is arguably the best in history, rising to power and getting 90% of a country to hate, and want the death of an entire race, from the simple use of speech clearly indicates the immense deceitful power of words. Secondly, opposing opinions can have the ability to stray people from the original point; all other powerful words must be destroyed to have a completely unbiased notion. Near to the beginning of the novel, Jewish books are burned on behalf of the Fuhrer in a massive bonfire, “’Today is a beautiful day,’ he continued. ‘Not only is it our great leader’s birthday-but we also stop our enemies once again. We stop them reaching into our minds….’” (Zusak 110). In celebration of the Fuhrer’s birthday, a large bonfire is held in the middle of Molching to burn Jewish books. The purpose of the bonfire is to destroy the stories and words that oppose the teachings of Adolf Hitler, because he realizes that the power  opposing opinions may manipulate the public into thinking differently to what he has told them. Powerful words used for positive actions can have the same massive influence as deceitful ones.

In Max Vandenburg’s novel, The Word Shaker, a young girl (portrayed as Liesel), grows a tree from her words. Her opinions were too strong to be destroyed by the Nazis; “Many hours passed, and still the Fuhrer’s ax could not take a single bite out of the trunk.” (Zusak 447). Max Vandenburg portrays Liesel’s words as a tree, sprouting from a tear of goodness. Her words’ power strengthen greatly, their manipulation and influence is so strong that Hitler cannot destroy them. Liesel’s words are a good sort of manipulation; they are so powerful that they have the ability to stop even the greatest word shaker. In The Book Thief, words used powerfully for goodness and manipulation have massive influence, yet one’s vocabulary can get more powerful still. Some words even have the ultimate power, the power to choose between life and death. Although it may seem less direct than a judge awarding a convict the death penalty or letting them off, words in Nazi Germany are the main reason why some people die, and some live. To start, people can be saved indirectly by words, being occupied by these beautiful works of literature can save people from the outside world quite literally. During a bomb raid over Munich, when the sirens are a slight bit late, Himmel Street is devastated. Everyone is killed, well – everyone but a little girl. Liesel Memmiger is writing her book in the basement of her house when the bombs strike Heaven Street; “I wonder what she was reading when the first bomb dropped from the rib cage of a plane” (Zusak 528).

The fact that Liesel is writing in her basement is the only reason that she survives, her love for words give her the motive to write very early in the morning, in a cold, dark, German basement. It is in-direct, but the power of words is the reason that The Book Thief’s life is saved. Secondarily, words that are not even meant to mean very much can also have the power to save lives. Words that Hans says to Max and his mother, although not meaning to, give Max the sanctuary in which he was able to live; “’He saved my life’…’He-if there’s anything you ever need’” (Zusak 179). During World War 1, Max’s father Eric saves Hans’s life by electing him to not go into battle, on the particular day that the entire battalion is killed. Riddled with survivor’s guilt, Hans offers Max anything that he ever needs, not knowing how much influence those words would have on  to come. The simple, guilt laced words that Hans says, not meaning to be extremely influential, are powerful enough to save Max’s life from the Fuhrer. Finally, like many, many words in Nazi Germany, some are evil, and some have the ability to take people’s lives. Adolf Hitler’s words are the most effective murderers of them all, he uses only his words to kill 6 million Jews “Without words, the Fuhrer was nothing.

There would be no limping prisoners, no need for consolation or wordly tricks to make us feel better” (Zusak 521). Hitler’s word bank is just as strong as the Nazi’s machine gun bank; his words are persuasive enough to convince the country of Germany to be murderers. Six Million, nearly an entire race of people are wiped out because of the gargantuan ability for words to be powerfully evil. The thing of greatest importance in life is living; it is the most sacred thing to have. Everything – it can all be taken away or given back to you with words, just a few, simple words. Isn’t it funny how every single person on earth has a murder weapon? Due to the human race’s ever increasing knowledge of how to use them, the powerful words have the ability to influence the outcome of events, and change people’s lives.

First of all, words have the ability to do cause great goodness in a time of evil. Second to one, if orientated correctly, a person’s vocabulary has the ability for brainwashing. Lastly, a good utilization of literature gives people the weapon to decide between the life and death of another person. God gives humans two eyes, two ears, two legs, two feet, two nostrils, and two hands – But only one mouth. It is safe to say, that is not a coincidence. 6 million people, 2 words. Heil Hitler 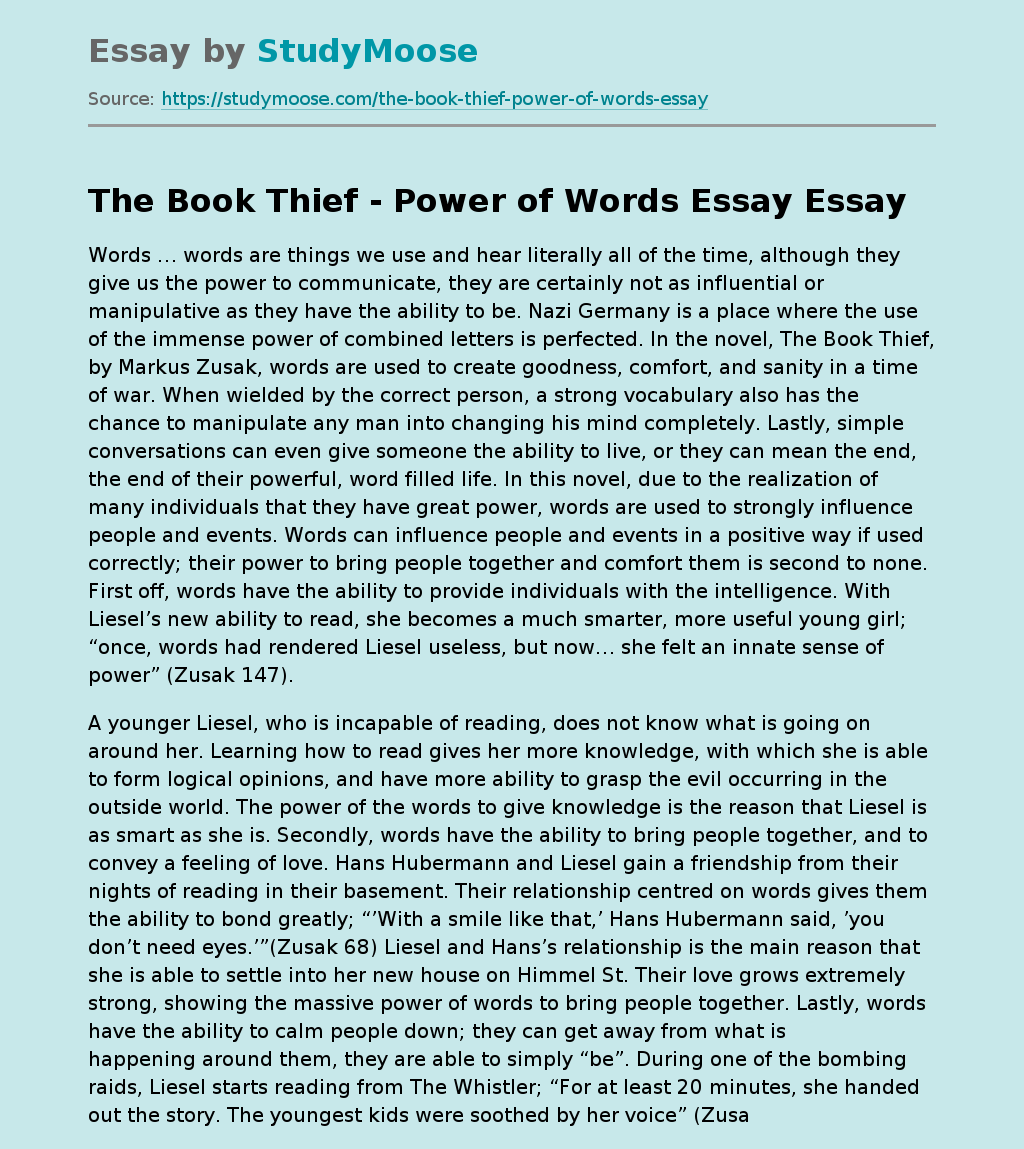