"The Messenger" by Markus Zusak

“Everyone can live beyond what they are capable of.” Discuss in relation to ‘The Messenger”

The Messenger by Markus Zusak shows us that everyone can live beyond what they are capable of. As the protagonist Ed, helps those in need, he is challenged to do things beyond his capability. In the beginning, Ed is described as the ‘epitome of ordinariness’ and he is called a ‘dead man’. The reason for this is because he has no meaning to his life and nothing to live for, no goals, ambitions or plans for the future.

Don't use plagiarized sources. Get your custom essay on
“ “The Messenger” by Markus Zusak ”
Get custom paper
NEW! smart matching with writer

When he starts receiving the cards however, Ed, for the first time in his life makes a difference in the world around him which pushes him to achieve beyond what he was originally capable of.

As he completes each card, Ed learns many valuable life lessons. He starts to take risks, be patient and trust others. Through Audrey, Ed learns that in order to love, you must be willing to trust.

Audrey has trouble with opening up to others and letting herself love, as Ed quotes, “Audrey doesn’t love anyone. She refuses.” Ed decides to take the risk and allow Audrey to love him for a few minutes. He learns that even though doing this may give a person the power to hurt you, taking the risk is one of the things you must do in order to be loved. Ed waits for Audrey and now that she has finally let him in, he sees that being patient with people will pay off in the end.

After helping Audrey overcomes her fear of love and trust, Ed finds the courage in himself that enables him to open up to his friends and the emotional side of his friendships. The card of hearts helps Ed to really understand the people he loves, which is something he has never done before. The use of themes plays a massive role in the Messenger, by describing Ed’s life and how he must deal with certain obstacles. Main themes in the book contain of identity, Disappointment, love and violence. The character life is based around these four main themes and he has to deal with them.

The whole purpose of Ed’s quest could be viewed in terms of him finding and accepting his own identity. It is clear throughout the novel that Ed lacks confidence in himself, his abilities and his worthiness. We are given many clues on the aces and his love of reading. Ed, however, constantly puts himself down and struggles with why he has been chosen to be the messenger. Ed struggles to be anything other than the black sheep within his family and he appears to identify more with his father than any of the living members of his family. It is partly the anonymity of his role as the messenger that lets him rise above his own insecurities. By the end of the novel he not only has won the girl, completed the challenges, but gained insight into himself. The poignant last line being ‘I am the message’.

Disappointment in the book, The Messenger by Markus Zusak is a painful experience of Ed and his friends finding out what they thought was possible was nothing more than a fantasy or unrealistic hope. Ed has to go though some of the hardest times that he would ever have to experience, with the girl of his dreams Audrey not loving Ed in a way in which he had hoped she would, how cruel and mean the world is and how he must learn to adapt to obstacles that approach Ed and how his mum thinks of ED compared to other siblings and that he will never be good enough for him in his mothers heart. Ways in which you can see disappointment in The Messenger is when Ed Kennedy is with Audrey and she is telling Ed how she loves him as a friend and nothing more and Ed thinks to himself, ‘You can kill a man with those words. No gun. No bullets. Just words and a girl’. This tells us how much Ed cares and loves Audrey and wants more than a friendship for the both of them to have.

Love is a powerful theme in the book the messenger, it affects most characters, especially Ed, Audrey and Ed’s mum. Love is what Ed ultimately desires. Ed wants Audrey to fall in love with Ed and for Audrey to experience love again, as opposed to just sex. Ed’s role being the messenger eventually allows Audrey to fall in love with Ed and not fear love as she did in past relationships. Ed also seeks love within his Mother and for her to accept him as her son. After the Clown Street message and the heavy discussion with his mother, Ed gains an understanding of why their relationship is so broken. This leads ED into a better situation with his mother and overall the love he has been asking and craving for from his mother, even if its not the traditional love we would expect between a mother and son. “My heart is so tired”, Ed says to himself after trying and trying to win over Audrey, this quote shows us how much Ed has tried and tried to love but Audrey wouldn’t except it.

Violence plays a big role, starting with the bank robbery. Ed will and did face a lot of violence from Edgar street, the rose brothers, the sledge match, Daryl and Keith, an as readers we are quite aware that all of these obstacles have shaped and changed Ed’s life mostly for the better. This is usually shown with Ed’s ease with violence, even when confronted by a bank robber with a gun, he reacts calmly and with a careless attitude of the gun. Violence seems to be a way of settling tensions and is one thing that seems to motivate some characters to strive and achieve, when nothing else does. Violence can also be seen as a means of communication, particularly with the Rose brothers. It also is a defining feature of Ed’s neighbourhood.

"The Messenger" by Markus Zusak. (2016, Apr 14). Retrieved from http://studymoose.com/the-messenger-by-markus-zusak-essay 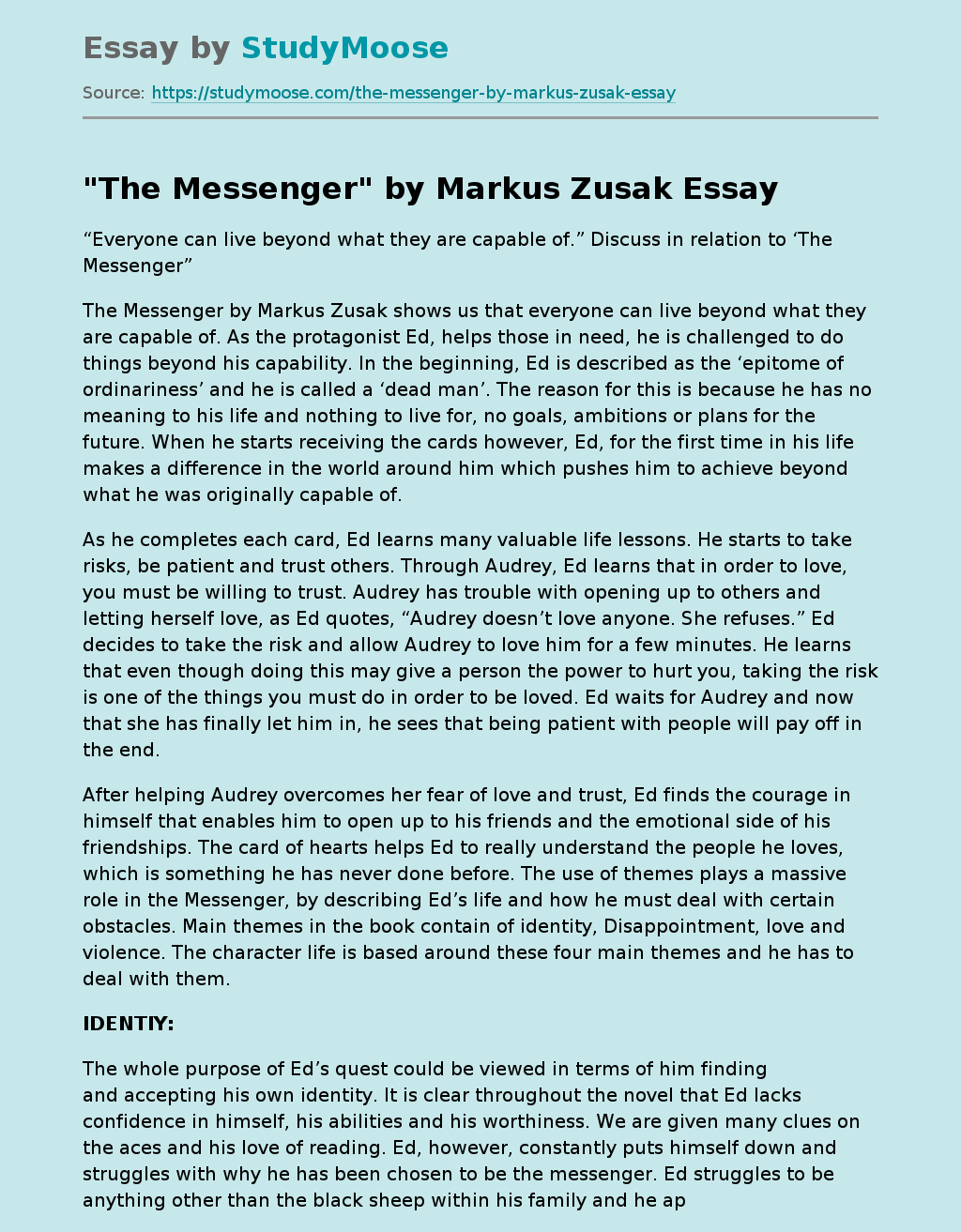