What is the role and function of the Messenger in Antigone and Medea?

The plays Antigone by Sophocles, and Medea by Euripides, present the conventional figure of a Messenger at climactic junctures in each play. Each Messenger brings appalling and shattering news that is deeply disturbing for the audiences and henceforth reflects on this shock. In Antigone, the Messenger’s narrative presents a dramatic recount of the deaths of Antigone, Haemon and Eurydice. The Messenger in Medea presents a long speech rendered dramatic, providing a grotesquely vivid image of Glauce and King Creon’s horrid deaths.

Don't use plagiarized sources. Get your custom essay on
“ What is the role and function of the Messenger in Antigone and Medea? ”
Get custom paper
NEW! smart matching with writer

This essay will consider the significance, impact and role of these Messengers through the exploration of such aspects of the play as stagecraft, philosophical viewpoints, manner and characterization.

Stage restrictions can be accounted for the messenger-speech. Certain events had to be narrated rather than shown because of several reasons: since it is a convention a Messenger enters immediately after a choral song as in the case of Antigone and Medea, the presence of the chorus facilitates scene-shifts; miracles cannot be shown on stage and the rules1 of Greek tragedy did not allow bloodshed or murder on stage, more unfeasible if it concerns suicides and supernatural deaths.

Furthermore, the Messenger’s report allows the audience to reflect on the nature of Medea’s actions and consider Creon’s altered position, instead of focusing on the tragic appearance of the deaths.

Both Messengers in the plays are ordinary slaves of the royal house who happened to be present during the events and have no personal relationships with their masters. Their function in the play is simply to bring news of events offstage, and then disappear.

However, their servitude prompts them to react, clearly seen in their arrivals. The Euripidian Messenger enters dramatically, ‘gasping for breath’2 and exclaims to Medea in a tone of anger and disbelief, showing bias in their exchange of words; however, true to the conventions of the messenger-speech he was impartial in his narrative. In contrast, the Messenger’s arrival in Antigone was less dramatic, reflected in his more reserved tone in his dialogue with Eurydice, displaying pity for Creon. Both arrivals allude to depressing news, however Sophocles’ Messenger makes the audience feel as if his diffident reaction implies of news much terrible than that in Medea. Although their characters are not explored further, the Messengers embody the value of honesty, and their recollections can thus be trusted by the audience, as conveyed “Truth is always best.”3

The Messenger is an eyewitness of the events he will be recounting although the degree of his participation is quite low. In both speeches, the Messengers explain their point of view by establishing eyewitness status, using first-person figures prominently: “I attended your husband, the King, to the edge of the field where lay the body of Polynices”4 and “Myself…I followed with them to the princess’s room”5. By distinguishing their positions, it doesn’t leave room for any uncertainty in the account but makes it more credible.

The intensity of the speech further accentuates the climatic points, Euripides and Sophocles relying on the power of the Messenger’s word to allow the audience to appreciate the extent of Medea’s ruthlessness and the consequences of Creon’s cruelty respectively. Although unassisted by a visual focus, the Messenger’s language is evocative and powerful, exquisitely painting the scene in minute detail thus allowing the audience to envision the image. The utilisation of descriptive literary techniques in the monologue of the Messenger was a common approach used by both playwrights to depict graphic scenes offstage. In Medea, the horrifying effects of the poison was described by the simile “Like the drops on the pine-bark, so the flesh from her bones dropped away, torn by the hidden fang of the poison.”

The Messenger’s use of imagery such as “changed colour…oozing from the girl’s lips, white froth; the pupils of her eyes were twisted out of sight…eating her clear flesh”7 further enriching the striking detail. His diction, particularly at this point in his narrative, illustrates the artistic excellence of Euripides. In Antigone, her attitude towards her father’s sin was metaphorically lamented as ‘married with death’8 and Creon’s demise from a powerful king to losing control over his life was further emphasized, describing himself as ‘the sport of gods’9. The Messenger also recreates the dramatic exchanges in dialogue between the characters, hence sustaining the interest of the audience. These techniques serve not only to help portray the scene but also give insight into characters and create a terrifying atmosphere whereby the audience is left in awe.

An interesting literary feature employed by Euripides, but not Sophocles, is the historic presents: using present tense while narrating, “she arranges her hair…she parades through the house”10. Therefore, it transforms the passage from a narrative into a vivid actuality and making a strong appeal to the senses. The speaker makes his hearer into a kind of pseudo eyewitness. Euripides also structures the Messenger’s speech in which the stanzas are set to reflect the tone and pace of the narrative. The second stanza tells of the poison taking effect, “All this took place in a few moments”11, the heightened anxiety of the messenger presumably speeding up his pace of the Messenger and consequently having an exciting effect on the audience. While in Antigone, the pitiful state of Creon was reflected in the presumably monotonous single paragraph by the Messenger.

The Messenger gives audience an insight to the character’s thought process and the effect it produces on other characters. Before he accounts for the murders, Medea’s character is perceived as that of a wronged, helpless woman, whom the audience can even sympathize with. However, whatever pity the audience holds for her is tainted as her evil intentions and vindictiveness becomes evident through her elation at the news of Creon and his daughter’s deaths, replying “Your news is excellent…You’ll give me double the pleasure if their death was horrible”12. The pleasant scene of princess Glauce’s initial delight is crafted deliberately to dramatize the contrasting events that are to follow. The dark atmosphere established from it acts as a precursor to Medea’s horrific murder of her children. In Antigone, the audience is hardly able to regain its composure upon hearing of the deaths of Antigone and Haemon before Eurydice’s suicide is also detailed. A sense of pathos is particularly evoked when the Messenger tells Creon that she, ‘with her dying breath cursed’13 him. The Messenger’s news and commentary places Creon’s altered position into perspective for the audience. The tragic nature of the deaths allows insight into the situation Creon contributed to developing, and to appreciate the extent to which his perverse nature led to his own downfall.

Characterization through the speech can also be exemplified by Glauce, a vague figure. She hates Medea’s children, adores Jason and is tremendously excited by the gifts; she is self-centred, sulky and has a girlish temper. The paternal attitude Jason holds towards her in their relationship is witnessed as he assertively orders her to “give up feeling angry. Those your husband loves, you must love too.”14 Upon adorning herself with the gifts, she exhibits a degree of self-satisfaction as she vainly admires the sight of her own beauty in a mirror. Euripides had skilfully sketched her character and portrayed her unfavourably thereby moderating in the audience’s sympathies.

Both messenger-speeches appear to wrestle with theological and philosophical questions. In Antigone, the messenger’s preamble indicates his philosophical outlook on Creon’s situation. Life is not fixed ‘for good or evil, fashioned for praise or blame’15. Rather it is mere chance that determines the joyfulness or emptiness in one’s life. He comments that status and wealth are ‘unsubstantial shadows’16 in comparison to ‘happiness of the heart’17 conveying that Creon, who mirrors a man of ‘riches and rank’18, has now lost everything dear to him and his empty life is like living death and came about ‘through man’s perversity’19. The issues that the Messenger addresses also concern all human beings despite being embedded in his depiction of Creon’s current position. The Messenger’s speech exceeds a recount, offering a point of view rather than an objective description, in turn shaping the audience’s viewpoint.

In Medea, the Messenger concludes his report with the discomforting note that ‘Happiness is a thing no man possesses. Fortune may come to one man, now to another, as prosperity increases; happiness never.’20 He proclaims that human life ‘is a shadow’21, an imitation of another perfect form, referring to the imperfection and fallibility of human nature. The employment of the Messenger may be viewed as a means for Euripides to convey his own philosophical views about human life. These matters appear to be the Messengers’ own lamentations of the tragedies, suggesting that part of the enjoyment and purpose of the play is to serve as a lesson in life.

Messenger- speeches are an important element in both Medea and Antigone, the playwrights having the capacity to comment and report on the violent consequences of the previous plot development. Without it, the audience would lack a great deal of understanding and appreciation on the play’s underlying themes and issues, thus detracting from the overall worth of the tragedy. Both Messengers share a similar milieu, and their roles and functions are also comparable, raising its excitement, and simultaneously contributing to a smooth flow and the overall dramatic value of the play. It can have a considerably powerful impact on the stage business, atmosphere, characters and the audience. The ancient Greeks loved to hear a good story well told and delighted in the artistic use by the performer of the power of the human voice.

What is the role and function of the Messenger in Antigone and Medea?. (2020, Jun 02). Retrieved from http://studymoose.com/role-function-messenger-antigone-medea-new-essay 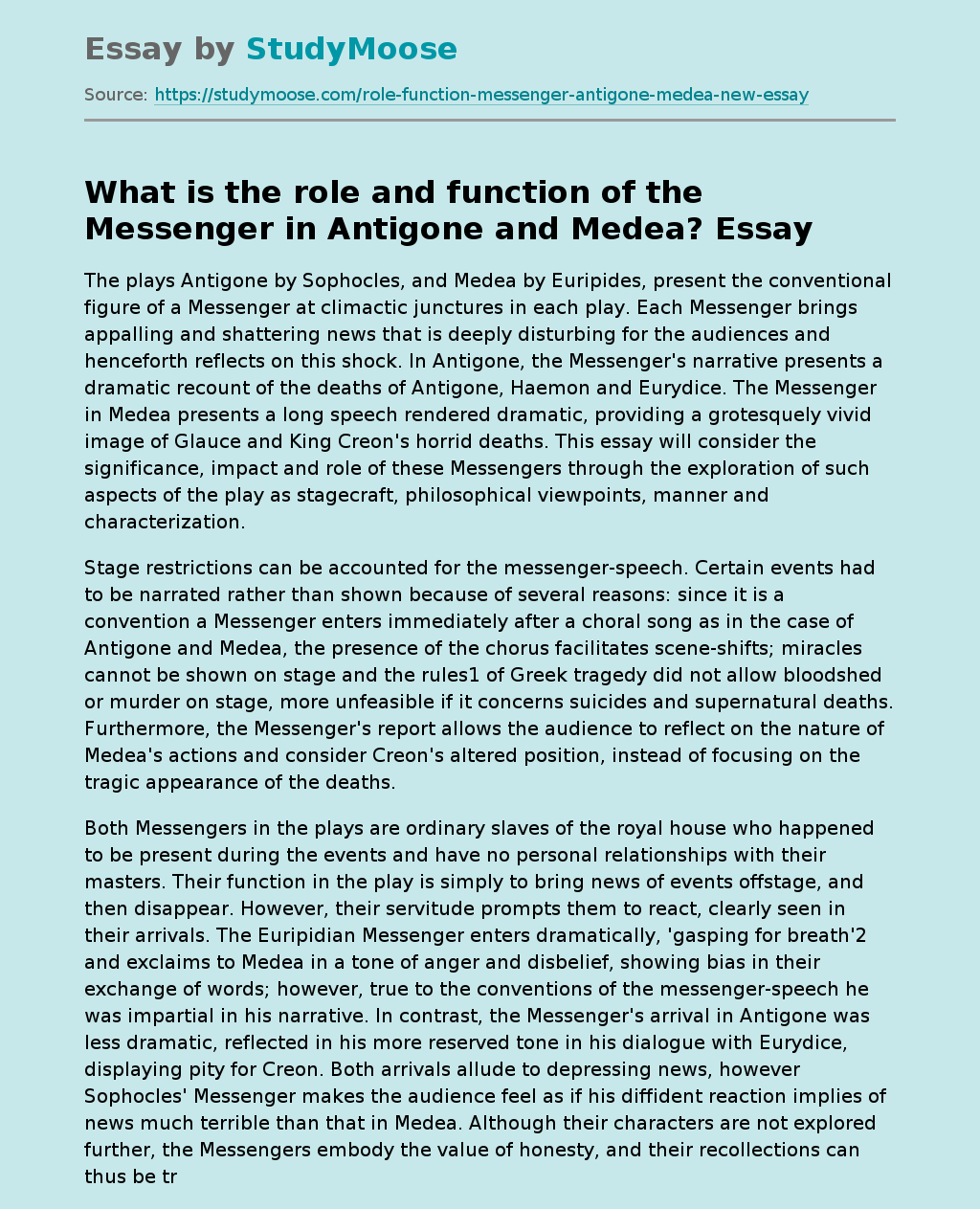