The character of Medea from Euripides's Medea

The Nurse tells the Prologue of Medea, and it is at this point that the audience first learns the story of Medea and Jason, and is positioned to sympathise with Medea.

Don't use plagiarized sources. Get your custom essay on
“ The character of Medea from Euripides’s Medea ”
Get custom paper
NEW! smart matching with writer

It is during the Prologue that we are told of Jason’s betrayal, and Medea is described as “bitter as the sea…weeping for the country she betrayed”. We also learn that Medea is a “souvenir from foreign parts”, “stripped of her place”. These factors encourage the audience to pity and sympathise with Medea. When Kreon exiles Medea, the audience further pities her. However, Medea then earns the respect and support of the audience when she challenges the prevalent values and attitudes of her society, by proving that she is intelligent and rational, outwitting the male characters of the play, and defeating Jason in a “bitter verbal argument”.

When compared to the male characters of the text, Medea appears intelligent, rational and passionate. It is these qualities of Medea’s personality that earn her the support and compassion of the audience. For example, Medea’s loyalty and courage compared to Jason’s betrayal and arrogance encourages sympathy and support for her. Medea also reveals the ignorance, and arrogance, of the male characters in the text, by using them as “pawns” in her plans for revenge on Jason.

For example, she convinces Kreon to allow her to stay in Corinth one more day, only to reveal her contempt for him to the Chorus, calling him a “fool”, after he has left. She also uses her feminine qualities, and the promise of “drugs…ways…[to] spill the seed of sons” to manipulate Aigeus, thus gaining her safety in Athens after she has committed her crimes and reaped revenge on Jason. By revealing the ignorance of the male characters, Medea challenges the place of women in Ancient Greek society. As women with power were silenced or demonised, and Medea usurps power from these men, she can be seen to be championing the plight of women. As the Nurse and the all-female chorus align themselves with Medea and give her their support, the audience is also encouraged to do so. The Gods also align themselves with Medea, thus encouraging the audience to do so.

The Gods were the most powerful body in Ancient Greek society, and were worshipped, adored, and feared. If a person crossed the Gods he or she would be punished. There is evidence in the text that Medea is the granddaughter of the Sun God, and Medea aligns herself with the Gods, therefore when Jason betrays Medea he “swears by the gods/ And by the gods he breaks his word”. Therefore, Medea’s revenge is constructed not only as personal revenge, but also as revenge on behalf of the gods. Medea must commit the crimes she does, such as killing her sons, and Glauke, to avenge the gods. Therefore the audience is positioned to empathise with Medea’s personal struggle to commit them. Also, the Gods do not intervene with Medea’s actions, until the end of the play, thus constructing her as an independent woman, again challenging the values and attitudes of her society and championing the plight of women.

The gods again align themselves with, Medea, and reward her for her actions, when she exits in the “Dues Ex Machina” at the end of the text. The fact that Medea is rewarded for her deeds, positions the audience to construct her deeds as noble, thus they are again encouraged to sympathise with her. During this final scene, Medea is also physically and metaphorically lifted above the rest of the cast, symbolising her final power and triumph over the patriarchal society she had challenged. The Chorus and the Gods, thus encouraging the audience to see Medea as noble, and thus sympathise with her, applaud this ‘victory’.

In conclusion, Euripides’s encourages the audience to sympathise with the character of Medea, in order to challenge the values and attitudes of Ancient Greek society. He does this by constructing Medea as a strong, independent woman, aligned with the gods and the women of the play. Her courage and personal conflict when plotting, and carrying out, her revenge on Jason, and her final reward from the gods for succeeding, encourage the audience to empathise with her, and see her deeds as necessary in her fight against the plight of women.

The character of Medea from Euripides's Medea. (2020, Jun 01). Retrieved from http://studymoose.com/character-medea-euripidess-medea-new-essay 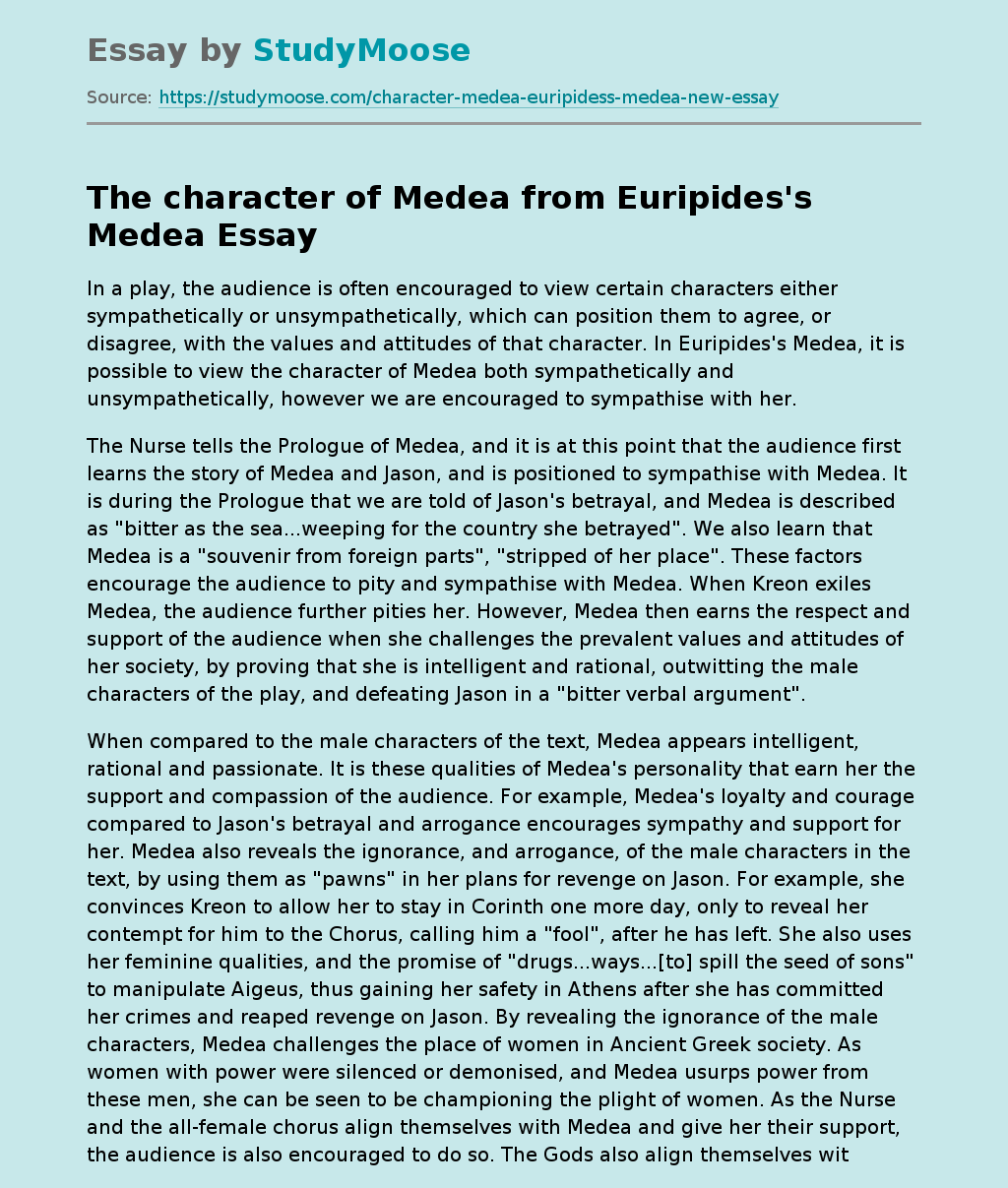